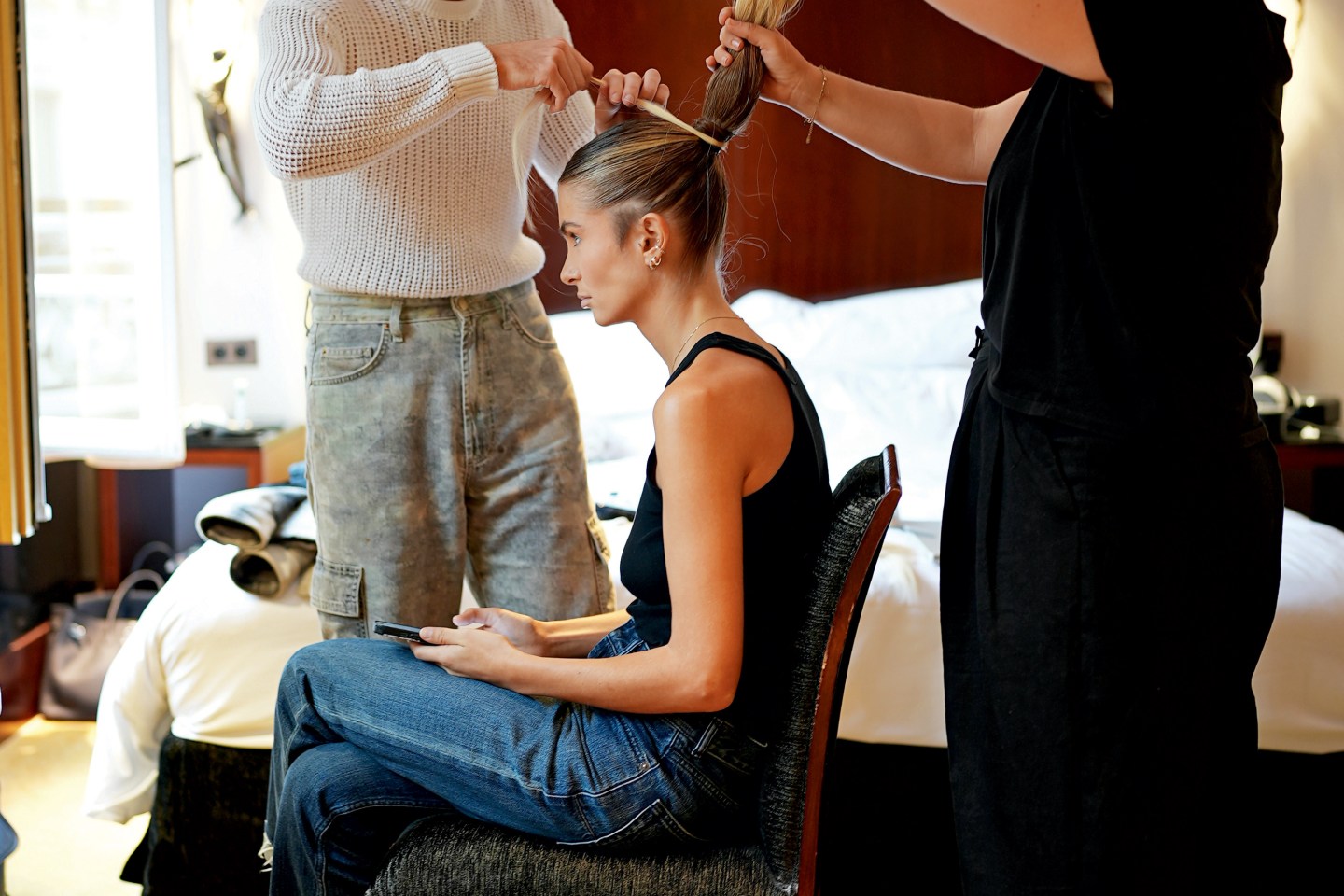 Xenia Adonts (center) has built a thriving business with online tools used by many fellow influencers.
Courtesy of Xenia Adonts

While working at the mall to save up for graduate school, Xenia Adonts saw her fashion photos going viral on Instagram. Eventually, brands noticed and started offering her up to $400 to post photos on social media that trumpeted their clothes. Realizing she could earn more in a day as an influencer than in a week as a store greeter, she eventually quit her retail job.

Today, with 2.1 million Instagram followers, the 31-year-old continues to hawk products on social media for luxury brands like Fendi and Elemis. She also started her own sustainable fashion company, Attire, which has 14 employees. “Influencers work much more than people on the outside think,” says Adonts in her New York studio, a day after meeting remotely with the brand’s team in Paris and various business consultants.

To post photos on social media and otherwise run her mini empire, Adonts uses online services like project management platform Notion, video editor InShot, and marketing manager Unum. They are part of a booming cottage industry that caters to creators, the catchall term for the influencers and small businesses that make a living by posting photos and videos on social media such as Instagram, YouTube, and TikTok.

In recent years, legions of companies have sprung up to sell creators the tech tools they need or help them land sponsorship deals with brands. Meanwhile, more established businesses like software maker Adobe, which caters to all kinds of customers, are increasingly being adopted by influencers.

The reason is obvious: The creator economy, with its 450,000 full-time creators, huge ad budgets, and growing appetite for tools that make the jobs of everyone involved easier, is valued at a combined $100 billion, according to career search platform Zippia.

It’s just the latest take on the old business adage: In a gold rush, selling picks and shovels is usually far more lucrative than mining.

But with the global economy sputtering, and the tech industry in a layoff frenzy, the question is whether the creator economy and its constellation of startups are headed for a reckoning. U.S. venture capital investment, a key indicator of the outlook for fledgling tech companies, fell by more than half in the third quarter compared with the same period a year ago, to $37 billion, according to consulting firm EY.

Video- and photo-editing tools are just one of the many areas that new businesses are piling into. Creators—sometimes with the help of professional editors—use the tools to tweak the raw footage they take. Though many creators use industry staples like Adobe’s Lightroom and Photoshop, there is also a new generation of social-specific tools such as Lightricks, whose apps, including popular Facetune, let users do things like add six-pack abs to their bathing suit selfies. In a sign of its status as a high-flier, Lightricks was most recently valued at $1.8 billion, according to PitchBook.

Companies that help the biggest creators post their content across the internet and take a cut of the ad revenue in the process are another hot niche. Jellysmack, for example, cuts the videos of its clients into hundreds of variations and then publishes them on social platforms—generating billions of views.

Taking a slightly different tack, Spotter has adopted the music industry strategy of buying up a creator’s entire catalog—YouTube videos, for example—and then collecting the ad revenue those videos generate. Some creator catalogs can sell for $100 million, according to the company. “There are going to be more and more creators making money in more and more ways,” says Spotter CEO Aaron DeBevoise. “It’s going to expand no matter what. The platforms which enable that to happen will be the most successful.”

Figuring out the best creators to enlist for pitching individual products can be complicated. There are millions of influencers, many of whom focus their social media posts on narrow interests, and thousands of companies in various industries looking to hire them.

To solve the problem, a number of companies have emerged, such as the startup Influential, that act as middlemen. Influential uses artificial intelligence to determine which combination of brands and influencers—it has 3 million in its network—would work best together. For instance, an influencer who is a DIY-savvy Midwestern mom with 10,000 followers may be the better fit for a Lowe’s social media campaign to sell home-improvement products than a major Hollywood celebrity with no DIY cred. “People say it’s a bit of a Wild West, but we’re in the teenage years of the creator economy,” says Influential CEO Ryan Detert.

Predicting big paydays ahead, venture capitalists have poured money into startups that are at least partly focused on the creator economy. Initially, the goal for many of those startups is to get momentum for their products with influencers, says Sasha Kaletsky, cofounder of Creator Ventures, a two-year-old venture capital firm that has invested in a number of creator economy companies. Then, after some success, those businesses try to move up the food chain to larger customers, which opens the door to more revenue. “The classic creative economy route is to start with creators and expand to brands,” Kaletsky says. “Brands are effectively the new creators.”

Of course, many of the creator economy vendors are unprofitable. And if starved of venture capital, as often happens during downturns, they could die off. Kaletsky is optimistic, however. He’s convinced that influencer advertising that is targeted at broad audiences will be relatively resilient during the current economic upheaval. But he expects that marketing of niche products will dry up, particularly because of recent privacy changes by Apple that make it more difficult to target ads to individual groups.

As for Adonts, she credits the tech tools and online services she uses for work with helping her rise from a minimum wage retail job three years ago to now earning seven figures annually (she declined to be more specific about her earnings). Otherwise, she may have ended up pursuing her original career plan—going to grad school and becoming a banker.

Companies whose tools are regularly used by creators are quickly growing in number. Here are some examples.

This article appears in the December 2022/January 2023 issue of Fortune with the headline, “Creator capitalism.”