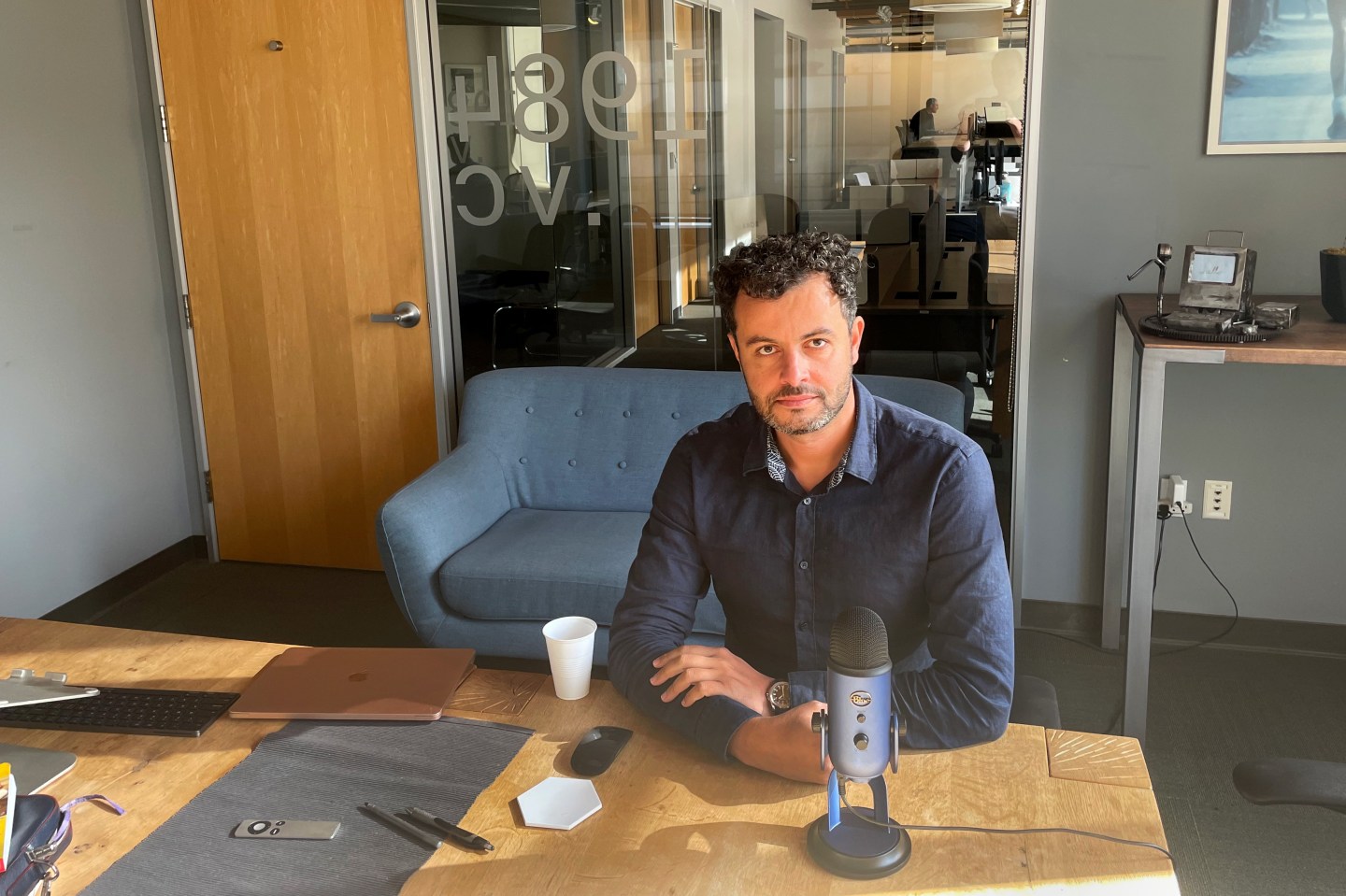 Not every venture investor was bewitched by the promise of cryptocurrencies and the growth of companies like FTX, the crypto exchange that filed for bankruptcy nearly two weeks ago. Some venture capital firms actually ignored the fanfare and passed.

Consider Ramy Adeeb, founder and general partner of 1984 Ventures, who in 2017 took a very public stance against investing in crypto. He published a column on LinkedIn that argued against the sector, associating Bitcoin with a scene from the movie The Big Short in which Mark Baum and his staff realize that a local Miami mortgage broker has been conning strippers into taking out highly leveraged mortgages. Adeeb attempted to debunk several myths about Bitcoin—that there’s a limited supply of the currency; that blockchain makes Bitcoin valuable; and that Bitcoins are secure. (Adeeb is the founder and ex-CEO of sharing website Snip.it—which sold to Yahoo in 2013—and is also a former principal of Khosla Ventures.)

Adeeb’s firm, a seed-stage venture focused on software-enabled startups in sectors like fintech, infrastructure, and health care, never seriously considered investing in FTX or companies like it. At the time, its partners were investing their first fund, a $45 million pool. “Our biggest concern with crypto was the plethora of applications enabling pyramid schemes or Greater Fool Theory,” he said, referring to games like Axie Infinity, which allowed users to trade in-game winnings for real money. Axie Infinity soared in popularity in 2021, boasting 2.7 million daily users at its peak and nabbing a $3 billion valuation. Earlier this year, Sky Mavis, the parent company of Axie, revealed that a hacker stole $600 million worth of crypto from its players and the game has flamed out, Fortune reported.

But in 2017, Adeeb and 1984 Ventures received lots of eye rolls for their anti-crypto stance, he said. Many of their peers said they would miss out on the next wave of technology. Some limited partners, or LPs, also questioned 1984’s strategy, while others said they would get more money if they switched to crypto. One LP told Adeeb that 1984’s first fund was probably a top quartile or top decile pool. But if crypto funds, which were all trading at 10 to 15 times their multiple of investment capital or MOIC, were included, “then you’re just going to be at the bottom,” the LP said.

Sometimes, this would lead to moments of doubt, Adeeb said. “But then we would go and dig deep and look for use cases for real opportunities, and we just didn’t find anything,” he said in an interview with Fortune.

Five years later, the crypto space is in disarray after FTX, one of the largest crypto exchanges, filed for Chapter 11 bankruptcy protection earlier this month. Sam Bankman-Fried, the founder and former CEO of FTX, has resigned from the company. The FTX failure follows other crypto blowups this year including Terra’s LUNA, an algorithmic stablecoin; the crypto bank Celsius Network; and hedge fund Three Arrows Capital. On Monday, BlockFi, a cryptocurrency lender, sought Chapter 11 protection. The industry is currently waiting for the next crypto firm to implode.

Adeeb has yet to utter an “I told you so.” Instead, he said that his firm, 1984 Ventures, simply tries to avoid the flavor of the day, whether it’s Google Glass, 3D printing, virtual reality, autonomous driving, crypto, or the current obsession with generative A.I. (The last is a category of machine learning through which computers can produce original content—like images, sounds, and videos—that is quite realistic.) “Because if there’s one thing for certain, the great companies existing seven years from now will not be in sectors that are hot today,” Adeeb said in an email. Fund 1 has performed exceptionally well and is somewhere between top quartile and top decile, he said. The pool has invested in companies like travel nursing platform Trusted; Kyte, a rental car website; and Convex, an enterprise software platform.

Adeeb’s 1984 Ventures is taking a similar strategy with its current fund, a $75 million pool raised in 2021. The venture firm is looking to invest in software companies that want to upend antiquated industries. It sees growth in sectors such as nurses on-demand, A.I. to improve retail operations, and predictive analytics for grocery orders, he said. “We intentionally avoid hot sectors,” he noted.

Adeeb wasn’t the only one to shun crypto and FTX. There’s Alexander Pack, a managing partner at Hack.VC, who in November 2018, when he was a managing partner and cofounder of Dragonfly Capital, considered becoming the first institutional investor in quantitative trading firm Alameda Research. Alameda, at the time, was launching crypto exchange FTX. Pack opted not to invest in the Bankman-Fried venture after discovering too many red flags. Another investor Fortune spoke to said he also chose not to invest in FTX several times because the valuations for the company “didn’t make sense.”

Adeeb attributed much of the interest in crypto startups to FOMO. Silicon Valley is “the world’s best hype machine,” he said. (Adeeb’s firm, 1984 Ventures, is located in San Francisco and a Silicon Valley fund through and through.) Investor appetite for certain sectors goes through pendulum swings, Adeeb said. Every time there is a new idea that promises quick cash, people jump in, and this invariably leads to some executives going to jail, he said. Adeeb pointed to Michael Milken, who developed the market for high-yield bonds in the 1980s and went to jail in 1990 for securities fraud. In the early 2000s, the implosion of the dotcom bubble revealed a series of accounting scandals that saw top executives from Enron, Tyco, and WorldCom go to jail. Then there was the subprime mortgage boom of the 2000s, which led to a global financial crisis in 2008. Lehman Brothers filed for bankruptcy during this cycle, also in 2008. (Interestingly, only one banker, Kareem Serageldin, former global head of structured credit trading for Credit Suisse, who allegedly lied about the value of the bank’s securities, went to jail in connection with the crisis.)

The last cycle was the crypto boom of 2022. Bitcoin soared to a high of more than $68,000 last year as the currency gained acceptance as a payment method. But that was before the spate of crypto bankruptcies this year. Bitcoin has plunged 76% since then, trading Monday at $15,991, according to crypto exchange eToro.

It’s unclear if Bankman-Fried, or anyone, will go to jail. But these high-profile figures play an important role by calling attention to sectors, Adeeb said. Milken’s innovations resulted in the current form of bond trading, while the accounting scandals of the 2000s improved financial reporting by spurring the development of new regulations and legislation, such as the Sarbanes-Oxley Act of 2002. After the global financial crisis, banks learned not to overextend credit into the home, Adeeb said. The crypto meltdown of 2022 could lead to a needed overhaul of securities regulation, he noted. “Current laws do very little to protect investors as evident by the many pump-and-dump schemes that took place. My hope is for better regulations—ones that protect retail investors, as opposed to ones that stifle innovation in the sector to maintain government’s control over monetary supply,” Adeeb said.

The crypto hype is over, and this means the entrepreneurs who remain are those who are serious about solving problems. Which has led to an interesting twist for Adeeb: 1984 Ventures made its first crypto investment. This month, the VC firm took a stake in a ticket provider that uses blockchain technology to control pricing as well as prevent fraud and duplicate tickets. Adeeb also sees uses for crypto in developing countries by enabling people in those regions to invest in something more stable than their local currency. Having avoided the likes of FTX, which created a massive tangle of problems, “we’re going to look at real applications of the blockchain that solve real-world problems,” Adeeb said.