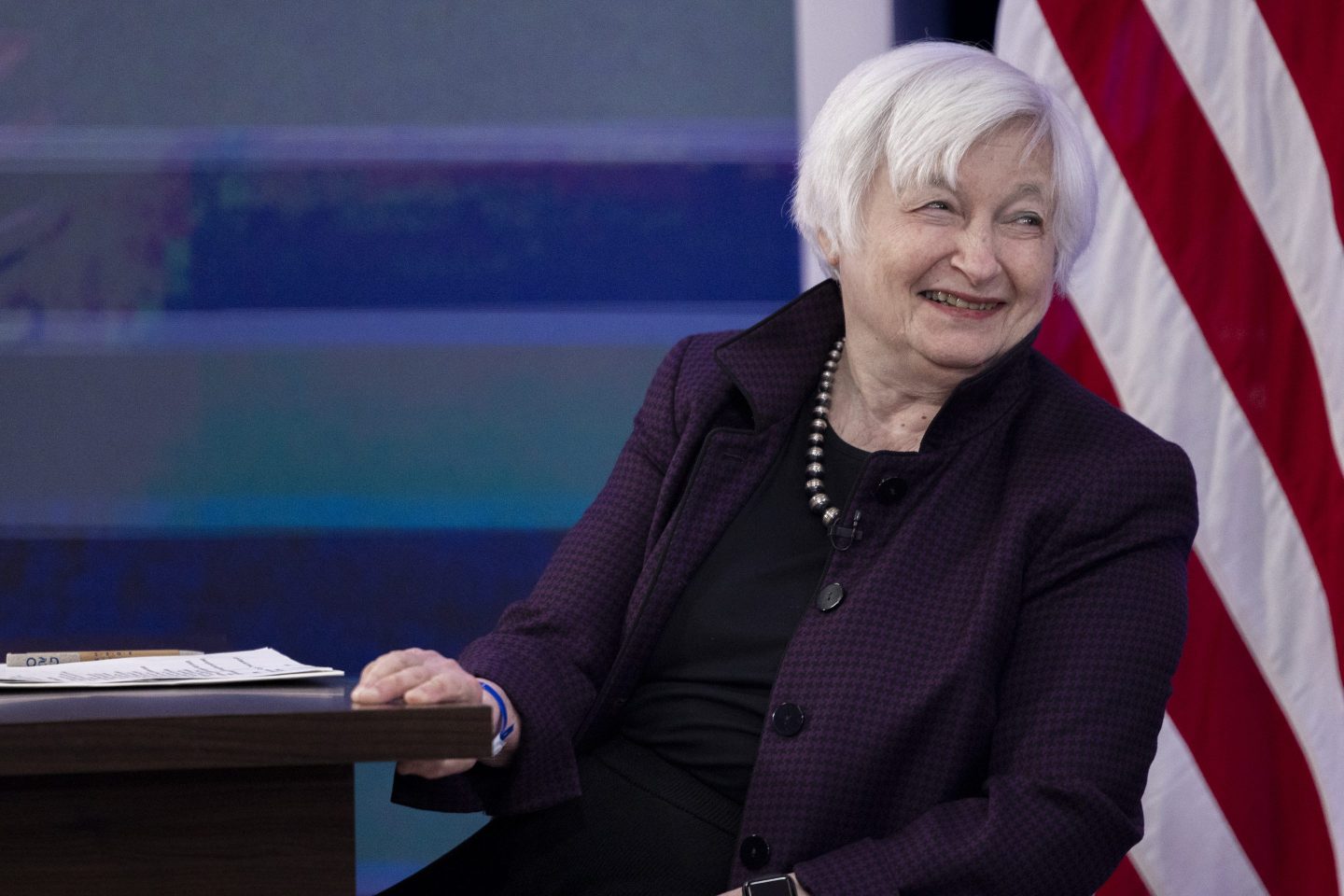 Good morning, Broadsheet readers! Today’s guest essay—just in time for some holiday reading—comes to us from Jon Hilsenrath, the author of a new book: “Yellen: The Trailblazing Economist Who Navigated an Era of Upheaval.” He traces the treasury secretary and former Federal Reserve chairwoman’s path to becoming the most powerful woman in U.S. economic policymaking history. By her side for that journey was her longtime research partner and husband, Nobel Prize-winning economist George Akerlof. This exclusive excerpt recounts how the pair met.

– Marriage of the minds. When Janet Yellen and George Akerlof arrived at the Fed in the fall of 1977, the place was a mess. Its leader, Arthur Burns, was on his way out the door. Inflation was running rampant.

Yellen had been an assistant professor at Harvard University and was rejected for tenure. Akerlof had left the University of California at Berkeley when his promotion was rejected. They met briefly at the going-away party of a colleague on the eighth floor of the Watergate complex in the fall of 1977.

George and Janet didn’t talk much that first night, and quickly went their separate ways. A few days later, however, they found themselves sitting together during a lecture by a visiting researcher. Janet, petite with a bob of dark hair and a broad, friendly smile, had George’s complete attention. They had friends in common. She was familiar with a paper George had written on the used car market, titled, “The Market for ‘Lemons,’” which challenged conventional views that markets were efficient and would eventually win him a Nobel Prize.

The two quickly discovered they had a common devotion to the ideas of John Maynard Keynes, the Depression-era economist who called for government spending to lift moribund economies. Both were driven by lifelong preoccupations with the problem of unemployment. They agreed to go on a date.

After an evening at George’s messy townhouse and Janet’s first meeting with “Sweetie,” George’s half-pitbull, half-Dalmation rescue dog known for urinating on a carpet at the Fed, the pair were smitten. A second date ensued the following day at Janet’s neat and orderly place.

George had already been through one hasty marriage that ended in failure, but he had no hesitation when he met Janet. He felt he had found his match in her, a woman whose worldview and temperament meshed perfectly with his.

In George, Janet felt she’d found a good soul with a value system just like hers and an uncommonly inventive mind. He also made her laugh.

In many ways, Janet and George were opposites. Janet was disciplined, grounded, sensible, orderly; George was creative, contrarian, and unorthodox. His mind went fast and in different directions; she thought through problems slowly and linearly. To each, it was a natural fit.

They had only known each other a few weeks when George told Janet he had a theory about decision-making and marriage. When a person isn’t sure about a decision, he said, that person will analyze the choice carefully, at length and from different angles, taking the time needed to understand the issues and the tradeoffs involved. But when a person is really sure of something, a decision can come fast. Janet saw his point and did the most impetuous thing in her life: she agreed to marry the man. She was 31. He was 37.

Yellen: The Trailblazing Economist Who Navigated an Era of Upheaval by Jon Hilsenrath.
Courtesy of HarperCollins

Akerlof was born into a long line of strong women. His mother came from an academic family and studied chemistry in graduate school at Yale. As far as he was concerned, Yellen’s career would stand on equal ground with his own. “It was automatic that we wouldn’t go anyplace where she didn’t have a job she was happy with,” Akerlof said. “It was always expected that everything was equal.”

They married and moved to London to teach at the London School of Economics. He had a job there and she found one there too. She followed him this time, but when she became a policymaker later, he would follow her routinely.

Many years later, Janet, George, and their son, Robby, watched a Japanese movie called Big Joys, Small Sorrows by director Keisuke Kinoshita. Set during the 1970s and 1980s, as Japan’s economy reemerged from the ravages of war, the movie traced the often lonely life of a family of Japanese lighthouse keepers as they shifted from place to place along the nation’s rugged coast.

Husband and wife come to realize in the movie that they are bound by the duty they feel to a cause bigger than themselves. Watching the film, George and Janet came to think of it as a metaphor for the marriage they started together in the late 1970s.

Their purpose, as they saw it, was a larger journey as stewards for the economy. Their own joys and sorrows, their own family and friends, all grew out of that. They saw themselves as lighthouse keepers. Some storms they managed well. Others, including a resurgence of 1970s-style inflation today, drove a state of emergency.

Through all of this, George and Janet have stuck to a pet name they developed for each other in the early days. They call each other Sweetie.

Excerpted with permission from HarperCollins’ “Yellen: The Trailblazing Economist Who Navigated an Era of Upheaval” by Jon Hilsenrath.

- Locked out. Women spend more time in the metaverse and spearhead more initiatives at their companies than men. Yet, men hold 90% of executive positions at organizations that set standards for the emerging metaverse, according to a McKinsey report released Monday. McKinsey

- Extended leave. JPMorgan will give 16 weeks of leave to all new parents for the birth or adoption of a child and four weeks of paid time off to care for sick spouses, children, or parents. The new policy goes into effect Jan. 1. Fortune

- Unexpected support. Former Vice President Mike Pence voiced his support for legal protections for fertility treatments during an interview with Face the Nation on Sunday. Pence, who staunchly opposes abortion, revealed in a new book that he and his wife underwent IVF multiple times. CBS News

- To the lower courts. The Supreme Court on Monday declined to hear an appeal from a Virginia school board arguing it shouldn’t be held liable for a female student’s alleged sexual assault by a classmate while on a band trip. The case will go to trial in a federal court in Alexandria, Va. Washington Post

- Sick days. Workplace absences for childcare emergencies were at an all-time high in October, as the flu, RSV, and COVID-19 forced parents to stay home and care for their children. Washington Post

- Jury deadlock. Jurors in actor Danny Masterson’s trial could not reach a unanimous verdict on the three counts of rape against the actor. The jury will resume deliberations on Nov. 28. AP

“Honestly, this felt like something impossible that could never happen, so it was the most unreal feeling.”

-Katy Nesbitt, who became the first American woman to officiate at a men's World Cup on Monday.