Sam Bankman-Fried and Alameda CEO Caroline Ellison spoke about red flags at FTX 3 months before it collapsed. Here’s what they said—and how they lied 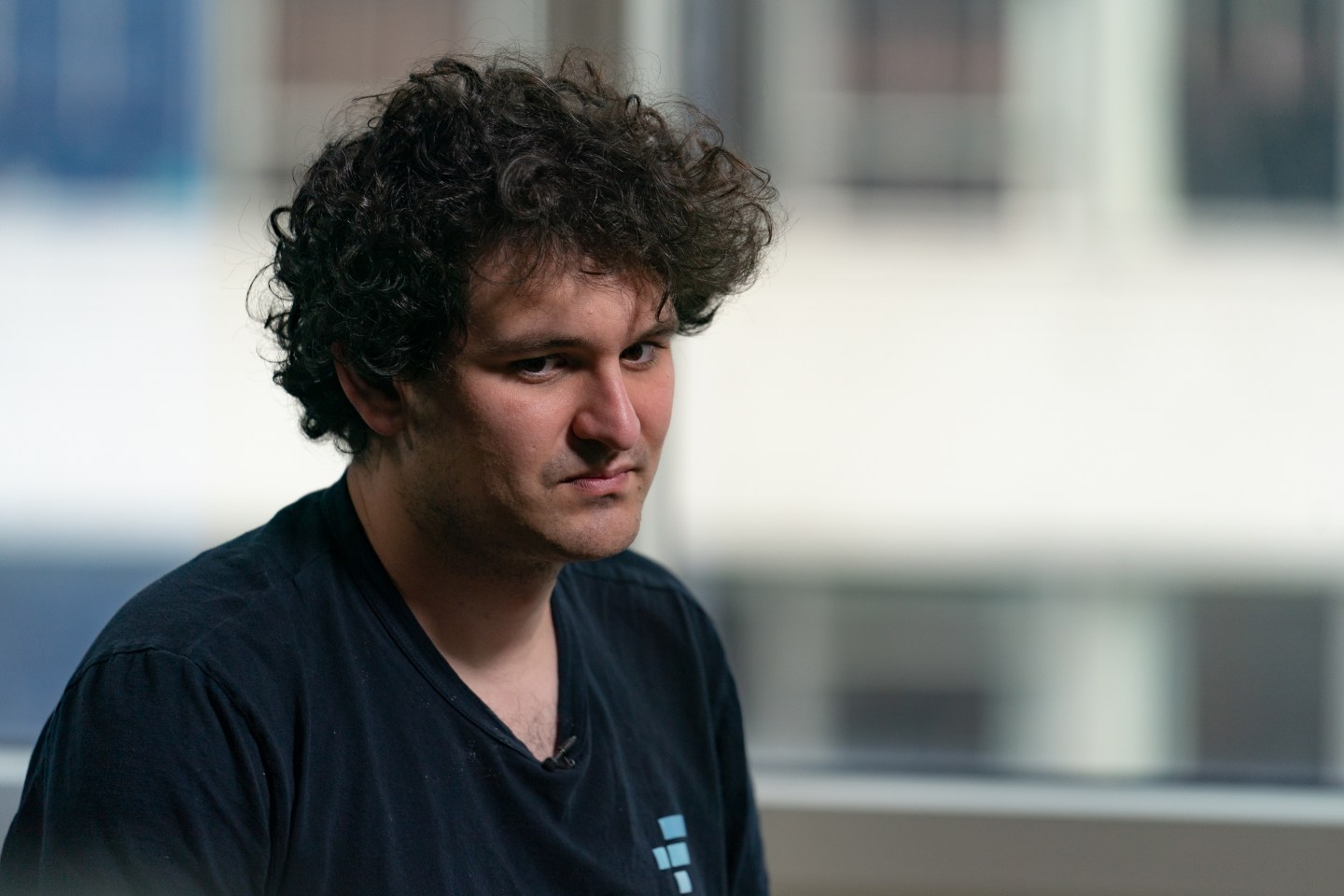 Sam Bankman-Fried, founder and chief executive officer of FTX Cryptocurrency Derivatives Exchange, during an interview on an episode of Bloomberg Wealth with David Rubenstein in New York, on Aug 17, 2022.
Jeenah Moon—Bloomberg via Getty Images

It was late August, and Sam Bankman-Fried appeared on a computer screen, sporting the black headphones, T-shirt and floppy bedhead that were his trademark as the ubiquitous face of crypto and the chief executive officer of FTX.

Questions were building about the exchange’s relationship with Alameda Research, the trading firm he started that’s behind the collapse of the cryptocurrency exchange. At the time, however, Bankman-Fried appeared eager to dispel concerns and agreed to an extensive interview. Bloomberg News also spoke with Alameda CEO Caroline Ellison, who usually avoided the spotlight.

Bankman-Fried lost his usual jittery bravado when pushed about Alameda’s ties to the exchange. He often fumbled for his words and failed to provide direct answers to a simple question about where he lived. He maintained that the companies were adequately regulated and kept at a distance from each other.

We now know that much of what he said was untrue — or highly misleading at best. Documents filed in FTX’s bankruptcy depict a free-wheeling enterprise rife with conflicts of interest, self-dealing and very little controls over what happened to customers’ money. Funds were poorly tracked. Leadership was haphazard. Meaningful oversight appears virtually nil.

What actually happened behind the scenes at the crypto empire tumbled into ruin is still being pieced together in court. But the massive gulf between what Bankman-Fried said — and what was happening at the company he ran — has rattled investors’ confidence and sent tremors across the industry by raising doubts about the solvency of other cryptocurrency firms.

Here’s what Bankman-Fried and Ellison said and how it stacks up with what has since been disclosed. Some of the comments appeared in a Bloomberg News story published in September about the potential conflicts of interest at FTX and Alameda.

On FTX’s relationship with Alameda

Bankman-Fried: “As of today, there isn’t that much of one there. You know, they obviously came from the same place originally. Or, you know, the same sort of original people … Most of the remaining nexuses have dropped off … Obviously, I know the people from Alameda decently well, but there isn’t like a large amount of, you know, ways remain that we are actively working together, anything like that … Alameda is a wholly separate entity.”

“They’re different offices, like different principal offices. We don’t have any shared personnel. We’re also not the same company … We’re not all under the same corporate umbrella or anything like that.”

“I don’t trade partially because I don’t have time. It’s a full-time job running FTX,” he said. “But even if I did have time, I wouldn’t because of wanting to have separations.”

Ellison: “They’re both owned by Sam, obviously. So ultimately, sort of aligned incentives in that way. We keep them quite separate in terms of day-to-day operations. We definitely have a Chinese wall in terms of information sharing to ensure that no one in Alameda would get customer information from FTX or anything like that, or any sort of special treatment from FTX. They really take that pretty seriously.”

Alameda and FTX were, in fact, deeply intertwined. In a bankruptcy filing Thursday, court appointed CEO John J. Ray III said there was no independent governance of Alameda — which was 90% owned by Bankman-Fried — and FTX, and noted that the trading fund had an exemption from certain parts of FTX’s protocols concerning the liquidation of customer funds. FTX imploded after revealing a roughly $8 billion shortfall on its balance sheet and reportedly used FTX customer money to fund risky bets made by Alameda.

Bankman-Fried: “We have — I don’t remember the exact numbers, but I want to say about 100 people, at FTX, involved in compliance.”

It’s unknown how many compliance staff — or even employees — FTX actually had. In the bankruptcy filing, Ray said the company has been unable to provide a complete list of who worked for it and in what capacity, adding that the lines of responsibility are unclear. But he paints a damning portrait of the firm’s overall governance. “From compromised systems integrity and faulty regulatory oversight abroad, to the concentration of control in the hands of a very small group of inexperienced, unsophisticated and potentially compromised individuals, this situation is unprecedented,” he wrote.

Bankman-Fried: “I’m hesitating because I — I mostly sleep on the bag. I don’t, it is legitimately not the case that I, that’s where you say – exactly I live. Yeah. So I do hang out a lot in that, in that apartment after – after work – I do live in – technically I live in a – technically I live alone, but don’t sleep there – I mostly sleep on couches and beanbags – but, but yeah.”

In a separate interview with David Rubenstein, Bankman-Fried had said that he lived with colleagues in a “large apartment” near the office. Alameda and FTX shared a corporate campus in the Bahamas.

On regulation of FTX

Bankman-Fried: “We are the most regulated crypto exchange by far. We are regulated by some definition by more regulators than any exchange of any type.”

“I think it has historically been the case that crypto has been substantially more lightly regulated with much less oversight than traditional finance. But I don’t think it’s that’s actually true of FTX.”

Both FTX and Alameda lacked vigilant regulatory oversight, and the exchange’s decision to incorporate in the Bahamas made it subject to regulations that are different than those of the US, where there are strict rules on the handling of customer accounts. So it was false to suggest it was exposed to more regulation than any other exchange. Though FTX US fell under the purview of regulators, crypto investors lack many of the protections they take for granted in savings accounts or even on stock exchanges. Now employees and customers with assets on its platform don’t know if they’ll ever get their money back.

Bankman-Fried: “We are audited. We have financial audits, both for FTX US and FTX International. Each year. We have regulatory oversight, again, from a number of the largest jurisdictions in the world.”

Only portions of Bankman-Fried’s empire were audited, and the quality of those has been cast into doubt. While bankruptcy filings show FTX had been audited, Ray, the company’s new court-appointed CEO, said he had “substantial concerns as to the information presented in the financial statements.” One of the auditors, Prager Metis, describes itself as the “first-ever CPA firm to officially open its Metaverse headquarters” in the platform Decentraland. “I do not believe it appropriate for stakeholders or the Court to rely on the audited financial statements as a reliable indication of the financial circumstances” of the companies, the filing concludes.

Ellison: “I think he’s an amazing leader, obviously, and that’s kind of the thing that first drew me to Alameda and I think that’s why both Alameda and FTX have kind of succeeded thus far.”

“I’m excited to see what he continues to do with FTX. And in the crypto space more broadly.”

Bankman-Fried stepped down from his role as CEO and his company’s collapse is drawing comparisons with the infamous downfalls of Enron and Lehman Brothers. American and Bahamian authorities have discussed the possibility of bringing him to the US for questioning.