When Lizzo shared her Emmy dress with a fan, she sent a message to the world about visibility, inclusivity, and the power of support 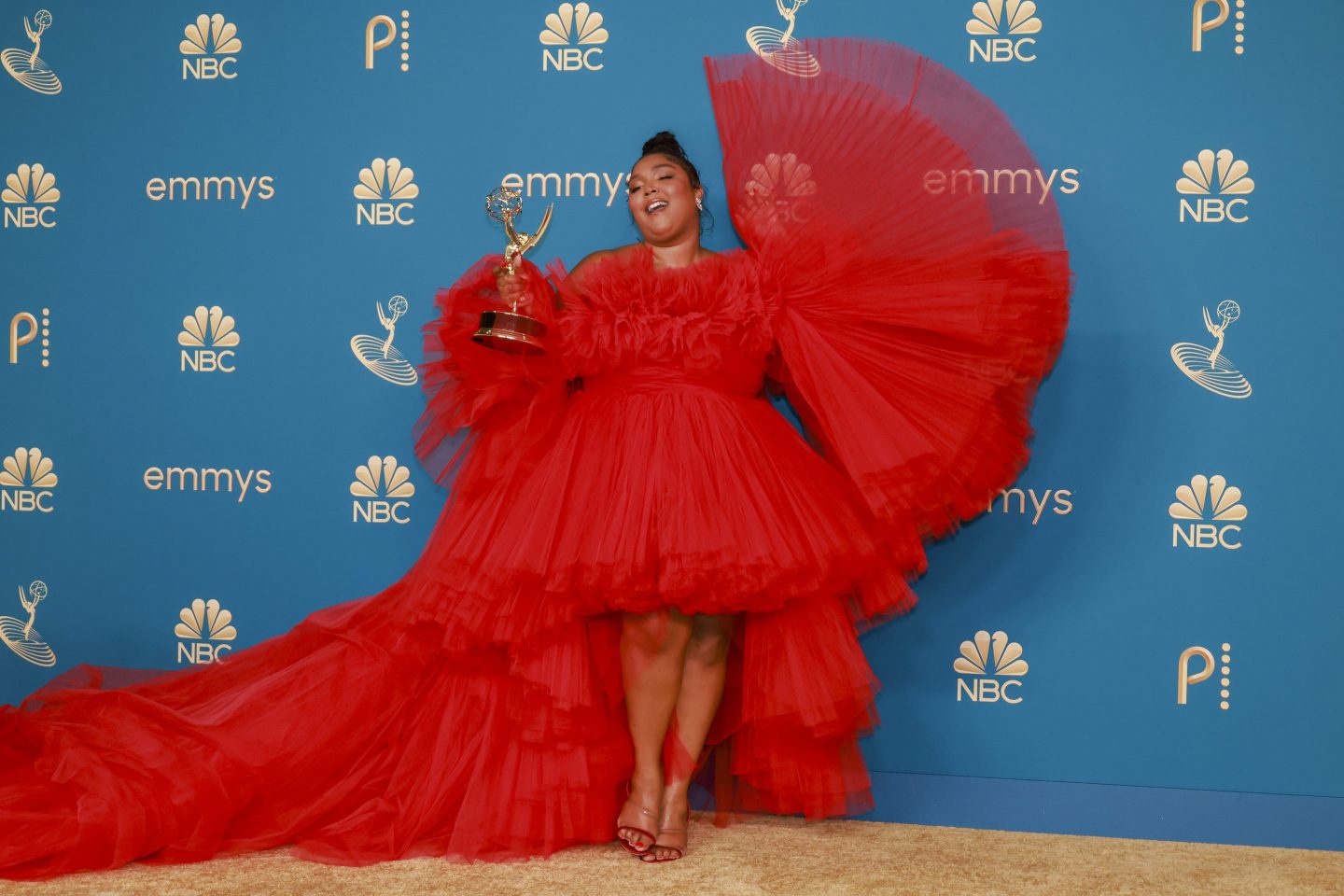 The dress Lizzo wore to the 2022 Emmy Awards is now a part of an iconic moment for fan after the singer sent them the dress to wear for an event.
Allen J. Schaben / Los Angeles Times via Getty Images

Once again, Lizzo has proved that she knows how to watch out for the big grrls.

When writer Aurielle Marie (they/she) was facing a fashion tragedy—an invitation to a fancy gala and nothing to wear—they shared their plight on TikTok and reached for the stars.

In this case, a cold call to a specific star.

“I can’t find anything that is big bitch and red carpet ready,” they posted, asking Lizzo if they could borrow the red Giambattista Valli dress the singer wore to the Emmy’s in September. “I know you know how it feels to be the biggest bitch in the room and all the scrutiny that comes with that. The audacity that you’ve marked in your career has helped me step out and be audacious myself.”

The gala was a very big deal for Marie.

The event in question was the Out Magazine gala in NYC, and Marie had been invited to celebrate their inclusion on the Out100 list as “one of the most important queer voices in the literary world.” Marie, an Atlanta-based writer, poet, and essayist who writes about Blackness, queerness, fatphobia, and identity, was having a series of breakout moments. Their 2020 debut poetry collection, Gumbo Ya Ya, had been met with critical acclaim—“a cauldron of hearty poems exploring race, gender, desire, and violence in the lives of Black gxrls, soaring against the backdrop of a contemporary South.” The Out list nod signaled more breakthroughs to come.

But none of that was helping them find a dress that wasn’t dowdy, corny, ugly, or that fit their frame. “I was like, what do I want to look like? How do I want to feel? And I ended up on this photo of Lizzo. She wore this dress as she accepted her first Emmy,” Marie told NBC News.

Their cold call on TikTok in late October ended up with a box delivered to their door this week, just minutes before they were set to head to the airport for the event. In the box held the dress. In a now-viral video, an ebullient Marie unboxed the frock and ran to put it on. “i might’ve gotten a few tears on your dress @lizzo, my bad babe! Words dont suffice, and thank you isnt enough. But THANK YOU! I’m speechless.”

[Narrator: If you count squeals, they weren’t speechless.]

When she shared her dress, Lizzo made sure another rising star got the red-carpet moment they deserved, with a twist. Thanks to her, the accomplishments of a fat, Black, queer poet have been documented in mainstream circles—the Los Angeles Times, People, The Today Show, Page Six, Billboard, InStyle, Entertainment Tonight, NBC, ABC, Pop Sugar, and Marie Claire, among others, all respectfully covered the news, correct pronouns, and all.

But a deft move of social media pageantry also allowed Lizzo to help a kindred spirit amplify a message —and people—they both care deeply about.

“My emotion is for the people who are on the stage with me, the stories they shared. They’re not that unique; they just don’t get the platform!” said a tearful Lizzo, accepting the Emmy for her reality television show, Watch Out For the Big Grrrls, and surrounded by the very girls she had been watching out for. “When I was a little girl, all I wanted to see was me in the media. Someone fat like me, Black like me, beautiful like me,” she said. “If I could go back and tell little Lizzo something, I’ll be like, ‘you gonna see that person, but bitch it’s going to have to be you.’”

Wishing you a weekend of breakthrough solidarity.

We don’t know enough about the experience of transgender people in the U.S., and an important survey aims to change that. The 2022 U.S. Trans Survey opened to the public last month, and over 33,000 people have pledged to complete it before it closes on December 5, 2022, says 19thNews. The online survey is the work of the National Center for Transgender Equality (NCTE), which first fielded a version of the survey in 2015. It was then the largest-ever data collection focused on the lives of trans people, far outpacing the National Transgender Discrimination Survey in 2008 and 2009, on which a lot of policy has been based. The survey is available in English and Spanish, please share widely.
U.S. Trans Survey

On background: Literature will save us

Imani Perry goes home to win the National Book Award for Nonfiction. Perry, a Princeton professor and a contributing writer for the Atlantic, says the American South is “both an idea and a region” and a key to understanding our sprawling and troubled history. Her book, South to America: A Journey Below the Mason-Dixon to Understand the Soul of a Nation, follows her journeys to cities across the South (which she documented on Twitter, and is one of the reasons I grieve the potential loss of the platform) to excavate the roots of pain and resistance. “I write for my people,” Perry said as she accepted the award. “I write because we children of the lash-scarred, rope-choked, bullet-ridden, desecrated are still here, standing.” If you’ve got a book club and planning on reading this book, I’d love to drop in. She is also the author of the must-read Unsettled Territory newsletter. More links to her work are below.
The Atlantic

A republished masterpiece reveals no secrets. Korean American writer and artist Theresa Hak Kyung Cha died early in her promising career, raped and murdered by a security guard in 1982, just as her now-acclaimed novel, Dictee, was released to the world. “I’d heard other Korean American writers invoke her name as one might a patron saint or ancestor,” writes first-time novelist R.O. Kwon in this emotional review of re-released masterwork. “I was hungry for more ancestors—for additional proof, in other words, that someone like me had existed.” What she finds is far more complex. Cha, an immigrant to the U.S. at age 11, grew into a conceptual artist, filmmaker, critic, and novelist, using an experimental form that Kwon found nearly impossible to follow. Then, the light bulb. “I realized that the fitful syntax and refusal to explain or contextualize was rendering the experience of having trouble speaking,” she writes, a condition common to people forced to abandon their own languages as immigrants. “Dictee’s intentionally fractured syntax evokes these experiences of colonization and displacement.” An ancestor, found.
The New Yorker

That time when the novelist Colson Whitehead was tired of being the world’s only Black friend. In preparation for a foreign press junket, the acclaimed novelist once tweeted this short graph that he’s considering putting on a business card. “While I’m glad we’ve had this chance to talk, because of time constraints, I cannot answer basic questions about race and how racism works. For an introduction to elementary concepts, the reverse of this card has a link to the article ‘16 Books About Race Every White Person Should Read.’ In the meantime, do you have any questions about my novel?” Click below for the list he was referring to.  Let me know what you’d add.

“The story is more important than you.”

—Colson Whitehead, author of The Underground Railroad, on writing.