If cement production were a country, it’d be the world’s 3rd largest emitter. Industrial powerhouses ABB, Shell, and Cemex are partnering with a startup to electrify the process 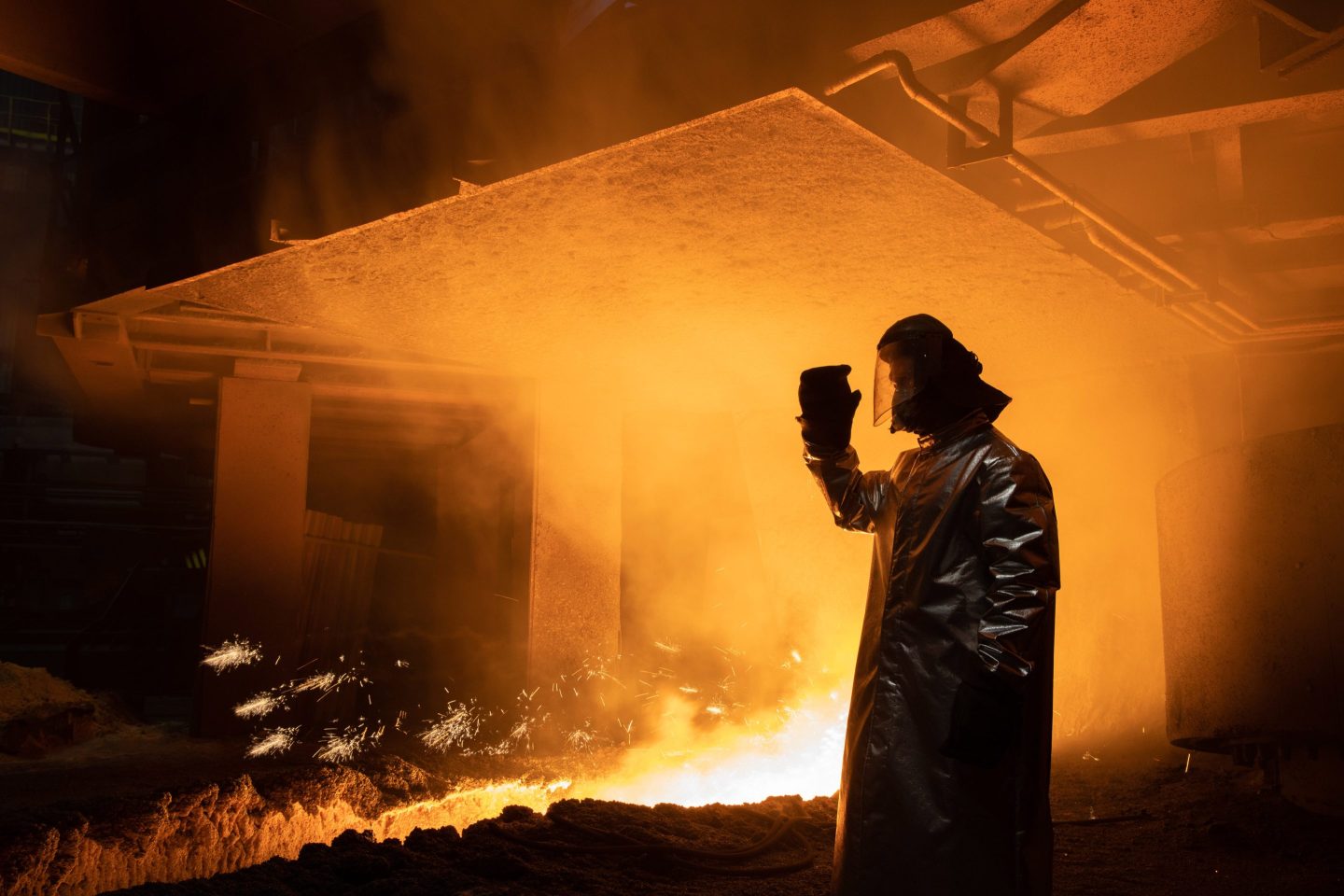 An employee inspecting a traditional blast furnace at a steel mill in Russia.
Andrey Rudakov—Bloomberg/Getty Images

If cement production were a country, it would be the world’s third largest greenhouse emitter in the world, behind China and the U.S., accounting for 8% of global greenhouse gas emissions.

Cement is also one of the hardest sectors to decarbonize, partly because combusting fossil fuels is, so far, the only way to produce the extreme temperatures necessary in production. But new tech developments are providing hope for this “hard to abate” industry.

Coolbrook, which has partnerships with industrial powerhouses ABB, Shell and Cemex, has patented an electric heating process to replace the traditional coke and gas-fired furnaces integral to industrial cement production. Coolbrook says the process could save 2.4 billion tonnes of carbon emissions a year.

The so-called RotoDynamic Heater generates heat without combustion, by accelerating air to generate friction and heat, forming a kiln powered by renewable electricity that can be used in industrial processes including cement, steel, and petrochemical production.

“If you think of the machine, it looks and works a little like a reverse jet engine,” Rauramo says. “There is an electric motor that is rotating these blades, and they are used to accelerate air to supersonic velocity, which is then slowed down again rapidly, converting kinetic energy into heat.”

According to Coolbrook, their heater system has successfully generated temperatures up to 650°C and is capable of heating to over 1000°C, although the company has yet to run such extremes. Coolbrook aims to pass that milestone in December, when it pilots its technology in a factory setting.

Mitigating carbon emissions from cement manufacturing entirely would require developing effective carbon capture technology (which other companies are trying to do). Meanwhile other alchemists are attempting to utilize concrete as a carbon sink, by injecting carbon dioxide into the slurry. The carbon content reportedly creates a stronger concrete while also reducing the need for cement, which is a binding agent in concrete.

Rauramo is, of course, optimistic about the future of decarbonizing heavy industry, comparing development in the nascent electric furnace industry to the slow early growth of solar and wind power.

“Wind and solar felt like it started slowly, but that’s what you see when you have an exponential growth curve. In the beginning it looks like it’s slow but, once things get moving, the change happens really quickly,” Rauramo says.

Smart thermostats–the type that automatically adjusts a house's temperature settings to suit the owner's varying needs throughout the day–are supposed to be energy saving tools. But a new study from the National Bureau of Economic Research (NBER) finds that homes with smart thermostats on average use the same amount of energy as homes without them. The reason? Homeowners keep overriding the automated settings. WSJ

Last year, Mexican brewers sold over $5 billion worth of beer abroad, securing the country's top spot as the world's largest beer exporter. But increasing droughts across the country are threatening the thirsty industry as residents, afflicted with water shortages, protest against industrial water use. President López Obrador has said that he will shift manufacturing from the country's arid north to its wetter south but, so far, brewers have stayed put. NYT

President Joe Biden and President Xi Jinping met at the G20 summit in Indonesia this week, ending a three-month diplomatic silence between the two countries, after house Speaker Nancy Pelosi visited Taiwan in August. The meeting—the first in-person conference between the two leaders—reopened a channel for the U.S. and China,  the world’s largest emitters of greenhouse gas, to cooperate on climate change. FT

Electric vehicles have surged in popularity over the past decade, but grid infrastructure hasn’t improved to match that increase in electricity demand. According to a new study by U.S. utility company National Grid Plc., electrifying a typical highway gas station will require the same amount of power as a professional sports stadium. When electric trucks start touring interstate roads, the projected power demand for a big rig stop will be the same as a small town by 2035. Bloomberg

Inside Rivian’s year from hell: How the EV-truck maker stumbled despite billions in cash, Amazon’s backing, and the 6th-largest IPO in U.S. history by Simon Willis

As Lula takes office, it’s time for Brazil to create an ‘economy of standing forests’ by Caio Koch-Weser And Carlos Nobre

The world needs to spend $3.5 trillion a year to fight climate change. Meet the biggest reallocation of capital in history by Bob Sternfels

On Tuesday, members of the G20 group of developed economies pledged to provide Indonesia—the country hosting this year’s G20 meeting—with $20 billion in financing to phase out coal power. The G20 have struck similar deals, dubbed Just Energy Transition Partnerships, before, such as financing South Africa $8.5 billion to phase out coal last year. As part of the deal, Indonesia has pledged to cap carbon emissions from its power sector by 2030 and boost the share of renewable electricity production from 11% to 34%.