What happens to the FTX empire’s 200+ crypto investments now? 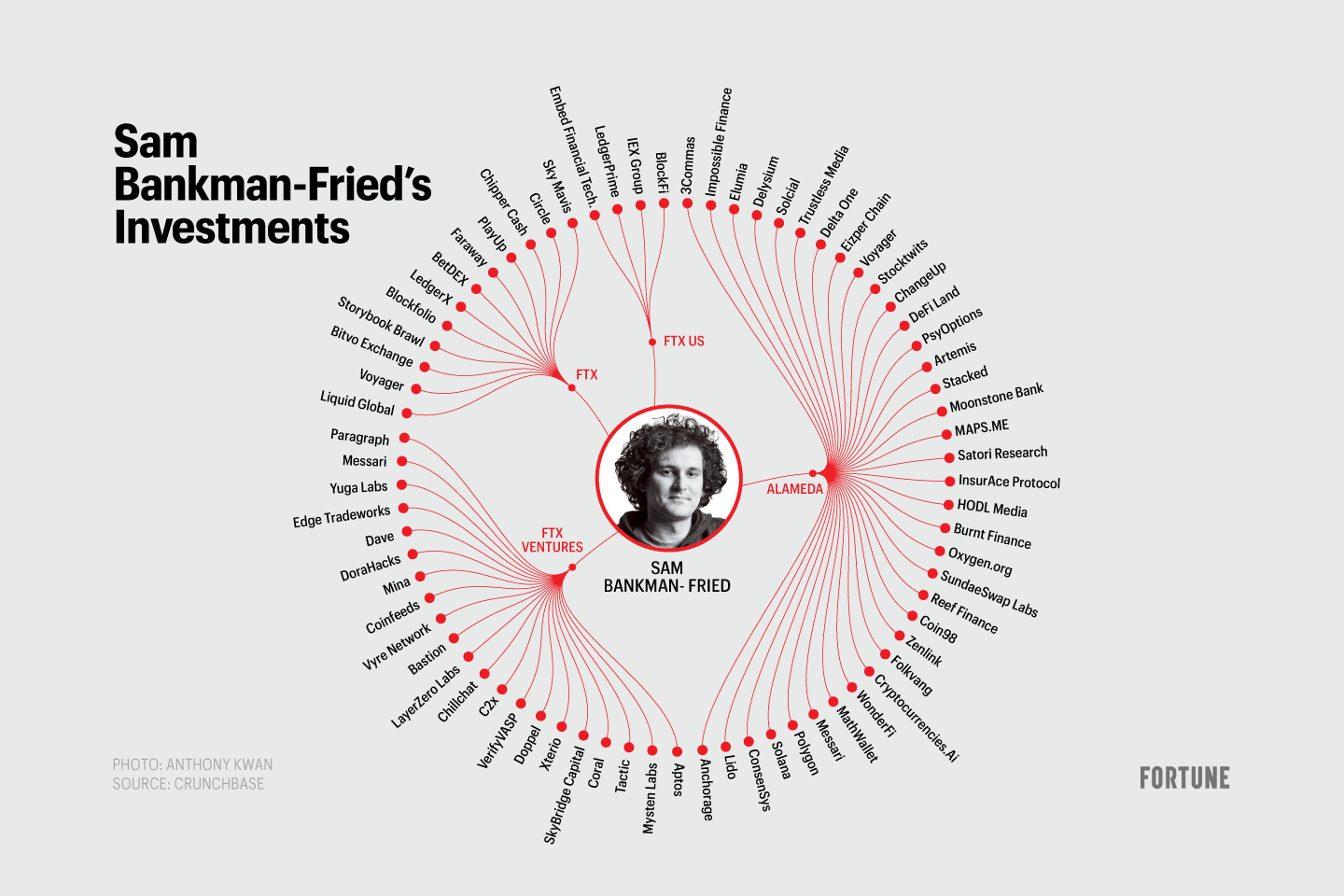 Prior to the implosion of crypto exchange FTX this week, founder and CEO Sam Bankman-Fried had his hands in everything—with his entities investing in the gamut from stablecoin issuer Circle to investment firms like SkyBridge Capital. Now that SBF’s firm is rapidly crumbling, what happens to those investments? And are VC firms circling to snap up the equity?

My colleague Leo Schwartz and I dug into SBF’s web of investments, which span FTX itself, his quant trading firm Alameda Research, and FTX’s venture arm FTX Ventures, whose $2 billion fund is funded by SBF himself as the sole LP. Just take a look at this mind-boggling chart below:

A partial look at the SBF empire’s investments, including lead investments and major companies in the crypto space.

Data from Crunchbase, which isn’t comprehensive, puts the number of portfolio companies for Alameda Research at 184 investments, FTX Ventures at 48 investments, and FTX at 21 investments. FTX and FTX US also made acquisitions, including troubled lender Voyager Digital’s assets in a September deal for $1.4 billion. And, it turns out SBF’s entities also invested in some VC funds themselves, as The Information reported on Thursday—including funneling hundreds of millions into Sequoia Capital, Multicoin Capital, and Paradigm.

Meanwhile, as Leo and I reported: FTX Ventures was actively investing prior to FTX’s recent troubles. Amy Wu, who heads the firm’s $2 billion fund, told Fortune last week it had deployed “close to” half of that sum year to date. Bankman-Fried was the fund’s sole limited partner, or investor, and Wu described his relationship with the fund as “essentially his family office.“

As to what happens to those companies the FTX empire was investing in? Things aren’t looking good, industry players told us.

Gautam Chhugani, managing director of global digital assets at Bernstein, said FTX is in a situation where it immediately needs liquidity, meaning it would likely have to unload equity at estimated discounts of 30% to 50%.

Companies that raised smaller amounts from FTX said they would not be affected. A spokesperson for Bored Ape Yacht Club NFT creator Yuga Labs, which received funds from FTX Ventures in March, directed Fortune to a tweet showing a leaked Discord chat message from Yuga Labs cofounder Greg Solano, where he wrote, “FTX was a small investor as part of our seed round, but obviously we got that check a long time ago. Doesn’t affect our operations.”

Other recipients may not be so fortunate. One such company, which received funding from the FTX umbrella and spoke to Fortune on the condition of anonymity, said it’s received offers from multiple investors to buy the equity at or above the last round’s price. The source added that initially taking money from the FTX sphere was an obvious move: “They were literally the best team out there.”

Companies at different stages likely will see varying outcomes, someone familiar with the firms under SBF’s umbrella told Fortune. Early-stage or seed companies may be able to find buyers at the same price, but ecosystem companies with tokens and later-stage companies likely will see their equity sold at a discount.

Some VCs are biding their time and keeping an eye on the situation in terms of whether they’d snap up some of that equity. David Pakman, managing partner of crypto-focused firm CoinFund, told me via email that, “Like everyone else, we are looking it over.”

Others, like Michael Anderson, the co-founder of the crypto-focused VC firm Framework Ventures, told my colleague Leo that he isn’t buying anything directly from FTX’s holdings, but has already been approached by third-party brokers offering tokens and token rights. As more of those assets are freed up, however, Framework would consider it, but that “Catching falling knives is definitely not in our investment mandate,” Anderson said. You can read our full story here.

As with everything this week, there are still a ton of unknowns. And I’m also wondering what happened, or will happen, to that remaining roughly $1 billion earmarked for FTX Ventures. Since SBF is the sole LP, I’d imagine that money would be used to try and make a dent in the financing hole FTX finds itself in. But FTX Ventures didn’t respond when I asked what will happen to the fund.

Correction: In yesterday’s Term Sheet, I accidentally wrote that Arca’s venture fund is a $34 billion fund, and not million. It is $34 million, and has been updated. I regret the error.

- Coefficient, a Mountain View, Calif.-based data connectivity and automation company for spreadsheets, raised $18 million in Series A funding. Battery Ventures led the round and was joined by investors including Foundation Capital and S28 Capital.

- The Wire, a New York-based news and data platform focused on China and global supply chains, raised $14 million in Series A funding led by Sequoia Capital.

- ​​Savvy, a New York-based wealth management platform, raised $11 million in Series A-1 funding. Cal Berkeley’s The House Fund led the round and was joined by investors including Index Ventures, Thrive Capital, and Brewer Lane Ventures.

- Directus, a Brooklyn, New York-based open source software company, raised $7 million in Series A funding. True Ventures led the round and was joined by Handshake Ventures.

- LRVHealth, a Boston-based venture capital firm, hired Josh Flum as a managing partner. Formerly, he was with CVS Health.