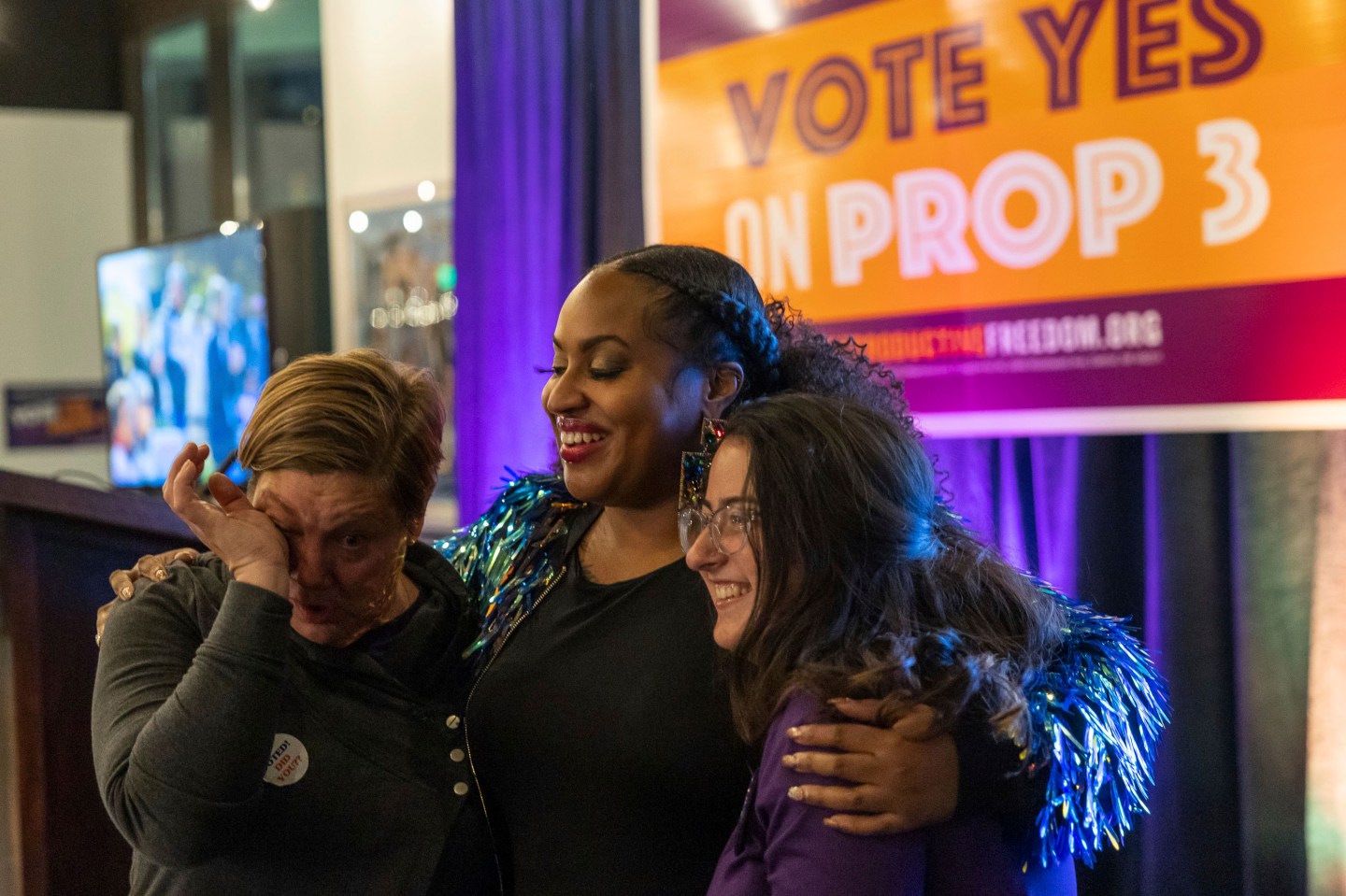 Voters in battleground Michigan enshrined abortion rights in the state constitution, joining reliably Democratic California and Vermont in taking that step. An anti-abortion measure in Kentucky was too early to call.

The Tuesday ballot measures came months after the Supreme Court overturned Roe v. Wade and the constitutional right to abortion it guaranteed to women nationwide. The decision in June has led to near-total bans in a dozen states.

Supporters of the push to protect abortion rights in Michigan collected more signatures than any other ballot initiative in state history to get it before the voters. It puts a definitive end to a 1931 ban on abortion that had been blocked in court but could have been revived. It also affirms the right to make pregnancy-related decisions about abortion and other reproductive services such as birth control without interference.

On Michigan State University’s campus, junior Devin Roberts said that students seemed “fired up” and that he had seen lines of voters spilling out of the school’s polling places throughout the day. The ballot measure was one of the main drivers of the high turnout, he said.

“There’s a lot of energy for Prop 3 on campus right now, whether you agree with abortion or not,” Roberts said. “I think students want to have the same rights that their parents had when they were younger.”

About 6 in 10 also say the Supreme Court’s abortion decision made them dissatisfied or angry, compared with fewer who say they were happy or satisfied.

James Miller, 66, of Flint, Michigan, said he thought of his daughters, granddaughters and great-granddaughters when he voted in favor of the measure.

“I think we should do the right thing for women,” he said. “It’s her body; it’s her privacy.”

Michelle Groesser, of Swartz Creek, Michigan, said she opposes abortion, even though she believes that any ban likely would have some narrow exceptions. “In a perfect world, I personally would want all life preserved,” she said.

Opponents have contended the Michigan measure could have far-reaching effects on other laws in the state, such as one requiring parental notification of an abortion for someone under age 18. Legal experts say changes to other laws would only happen if someone sued and won, a process that could take years and has no certainty of success.

Even so, the messaging appeared to resonate with some Michigan voters, including Brian Bauer, 64, of Mundy Township, who said the proposal was confusing and voted against it.

Bauer is an abortion opponent who supports some limited exceptions, “but nobody’s willing to throw (in) any kind of compromise … it’s either a yes or no vote.”

In deeply conservative Kentucky, the ballot measure would amend the state constitution to say there is no right to abortion. The Republican-controlled Legislature has already passed a near-total ban on abortion. The measure would not change that, but the results could shadow the legal battle returning to a courtroom a week after Election Day.

Lawmakers added the proposed amendment to the ballot last year, a move that some thought would drive more conservative voters to the polls. But after the Roe decision, abortion-rights supporters raised nearly $1.5 million to fight it. They were hoping to repeat the surprise outcome this summer in conservative Kansas, where voters overwhelmingly defeated a similar amendment that would have allowed new bans or restrictions.

At a elementary school in Simpsonville, a small town outside of Louisville, 71-year-old voter Jim Stewart said he voted for Paul, calling him “the only one on TV making sense.”

Stewart is a registered Republican and opposed to abortion, but still voted no on the amendment. “You got to have a little choice there.”

Al Smith, 83, voted yes: “I don’t believe in abortion at all, not for any circumstance,” he said.

The reproductive-rights question in Vermont, came after Legislature passed a law in 2019 guaranteeing reproductive rights, including getting pregnant and having access to birth control. Supporters with the Reproductive Liberty Ballot Committee said the overturning of Roe meant “state-level protections are vital to safeguarding access to reproductive health care.”

The question for Montana voters was whether to create criminal penalties for health care providers unless they do everything “medically appropriate and reasonable” to save the life of a baby after birth, including the rare possibility of birth after an attempted abortion.