What stock investors should watch for in the midterm elections, from cannabis to tech 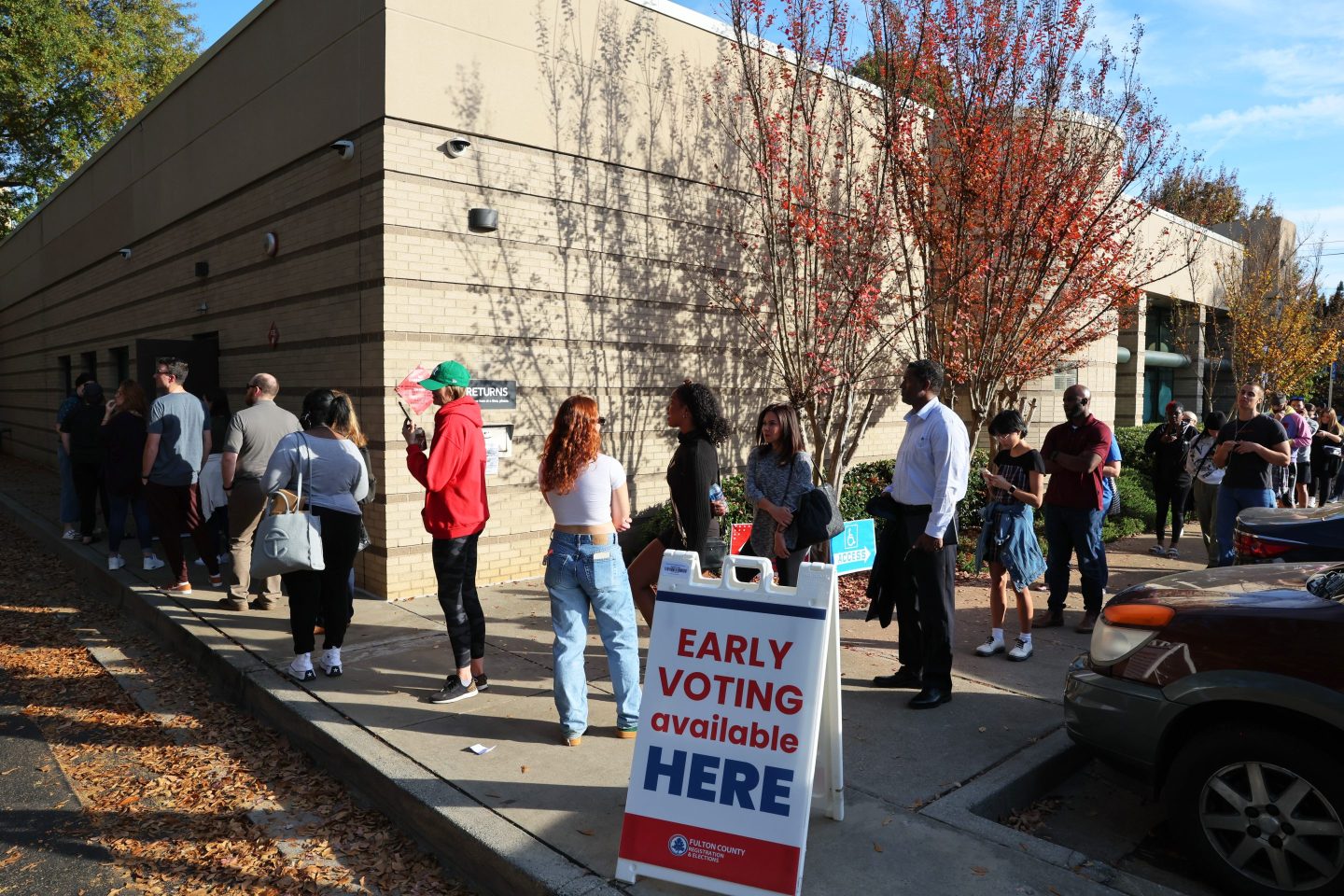 How will they vote? Stock traders must watch the midterms closely.
Michael M. Santiago—Getty Images

Next week’s midterm elections could be a defining moment for equity investors with most polls pointing to Republicans at least winning the US House and maybe the Senate, ending Democrats’ control of the legislative branch and potentially ushering in a period of gridlock.

That isn’t necessarily a bad thing for equities as such scenarios tend to preserve the status quo, reducing uncertainty. Still, for specific areas like health, energy and tech, the makeup of the next Congress will be key to determining their path forward.

Republicans also have a shot at winning the Senate, which would give the GOP full control of Congress and make it easier to advance their policy priorities, though President Joe Biden could use his veto power. That could be the best-case scenario for industries that tend to be favored by Republicans such as energy, defense, pharmaceuticals and biotech.

The end of Democratic control would rob Biden of the ability to use lawmakers to executive the rest of his agenda, potentially causing him to rely more on executive action to promote his priorities.

Here are areas equity investors should watch after the midterm election results:

The cannabis sector has been hit hard this past year amid the fitful pace of US legalization and a broader risk-off mood among investors in the highly speculative industry. The Cannabis Index has plunged 57% in 2022, with Tilray Brands Inc., Canopy Growth Corp. and SNDL Inc. all sinking at least 45%.

Investors will be closely watching several state referendums for progress toward legalization at a local level. Voters in Maryland, Arkansas, Missouri, North Dakota and South Dakota will weigh whether to approve legalization for adults.

“If four or five approve, it would probably be deemed a positive, but if Maryland does not approve, that would definitely be deemed a negative,” said Bloomberg Intelligence analyst Kenneth Shea.

Republican control of at least one chamber of Congress would likely push federal legalization off the table for now. Democratic control of both chambers, while unlikely, would be far more favorable for the cannabis industry. The Cannabis Index surged 18% last month when Biden issued a pardon for all prior federal offenses for simple possession of marijuana.

Investors in the healthcare industry have been closely following developments from Washington around the issue of drug pricing, with the midterm elections magnifying ramifications for the sector.

Provisions that would empower Medicare to negotiate some drug prices under the Inflation Reduction Act are being marketed by Democrats as a landmark change that would lower drug costs for Americans. Not all high-price drugs will be subject to negotiations, but certain cancer treatments and other brand-name medicines used by seniors could have lower prices as early as 2026.

“Republicans have traditionally been more favorable to the drug industry than Democrats,” Cowen analyst Rick Weissenstein wrote in a note Oct. 14. “While Republicans won’t be able to repeal the drug pricing provisions, they have vowed to hold hearings on the plan and to look for other ways to slow down implementation of the bill.”

Pharmaceutical companies including Pfizer Inc., AbbVie Inc., Eli Lilly & Co. and Merck & Co. could all see their revenue outlooks impacted by any changes to rules on drug pricing.

A threat to delist Chinese stocks that trade on US exchanges but don’t comply with Trump-era audit laws has backing from both Democrats and Republicans. That support, as well as growing geopolitical tension surrounding China, has sent the Nasdaq Golden Dragon China Index plunging 39% this year.

If Republicans take full control of Congress it will ratchet up the intensity of oversight and likely lead to hearings not only over the status of audits but also if Chinese firms should even be listed in the US at all, according to Jaret Seiberg, an analyst at Cowen & Co.

The Securities and Exchange Commission has identified about 200 stocks that face removal for not allowing US auditors access to their records including tech giants Alibaba Group Holding Ltd., Pinduoduo Inc., and Baidu Inc.

Democrats recently passed a landmark climate law that includes generous long-term subsidies for clean-power installations. Even though no Republicans in Congress supported the bill, it’s highly unlikely these credits face any danger after the midterms. This bodes well for developer NextEra Energy Inc. and rooftop-solar installer Sunrun Inc. Biden still has another two years in his term — and the climate package is a signature achievement that he will be keen to protect.

Energy stocks have been a rare bright spot in an otherwise grim year for equities, boosted by skyrocketing oil and natural gas prices. That’s translated to higher fuel costs for Americans, making the sector an easy target for Democrats in an election cycle focused on the burdens caused by inflation.

Assuming Republicans win control of either the Senate or House, energy policy is unlikely to see a major shift. While the Biden administration’s recent threat to impose a windfall tax on oil producers initially sent companies including Phillips 66, Exxon Mobil Corp. and Chevron Corp. lower, such a proposal is likely to be blocked by Republican lawmakers.

Even under the current makeup of Congress Biden has “little power” to push his tax proposal through, according to Benjamin Salisbury, a managing director at Height Capital Markets. “It is highly unlikely that Congress will make any progress on the issue before year-end and is unlikely to address it in 2023,” he added.

Even if Biden somehow gets the votes he needs to move forward with a windfall tax — which, to be clear, is a longshot at best — there is a potential upside for energy stocks, according to Louis Navellier, the chief investment officer at Navellier & Associates. The idea is that the levy would discourage new investment, thereby curbing oil supplies and driving prices even higher.

Major US technology companies, from Alphabet Inc. to Meta Platforms Inc., have long been thought to be a target for potential regulation. And indeed, the White House is planning a post-midterms push for antitrust legislation, a last-ditch effort to get a stalled pair of bills through Congress before a predicted Republican takeover in January. The GOP has made it clear that they won’t support the bills if they retake control of either chamber of Congress.

For tech investors, the midterms also bring a renewed focus to the research and development tax break put in place during the Trump administration, which expired last year. Under that legislation, firms with large R&D spending like Intel Corp. and Amazon.com Inc. could fully deduct those costs during the year in which they occurred as opposed to having to write them off over of the span of five years.

“The R&D tax credit change, if reversed, we feel would be positive for the information technology sector,” said Michael Taylor, an analyst at Wells Fargo. “If the tax credit is not reversed, a higher corporate tax bill could potentially weigh on the earnings and performance of the affected companies.”