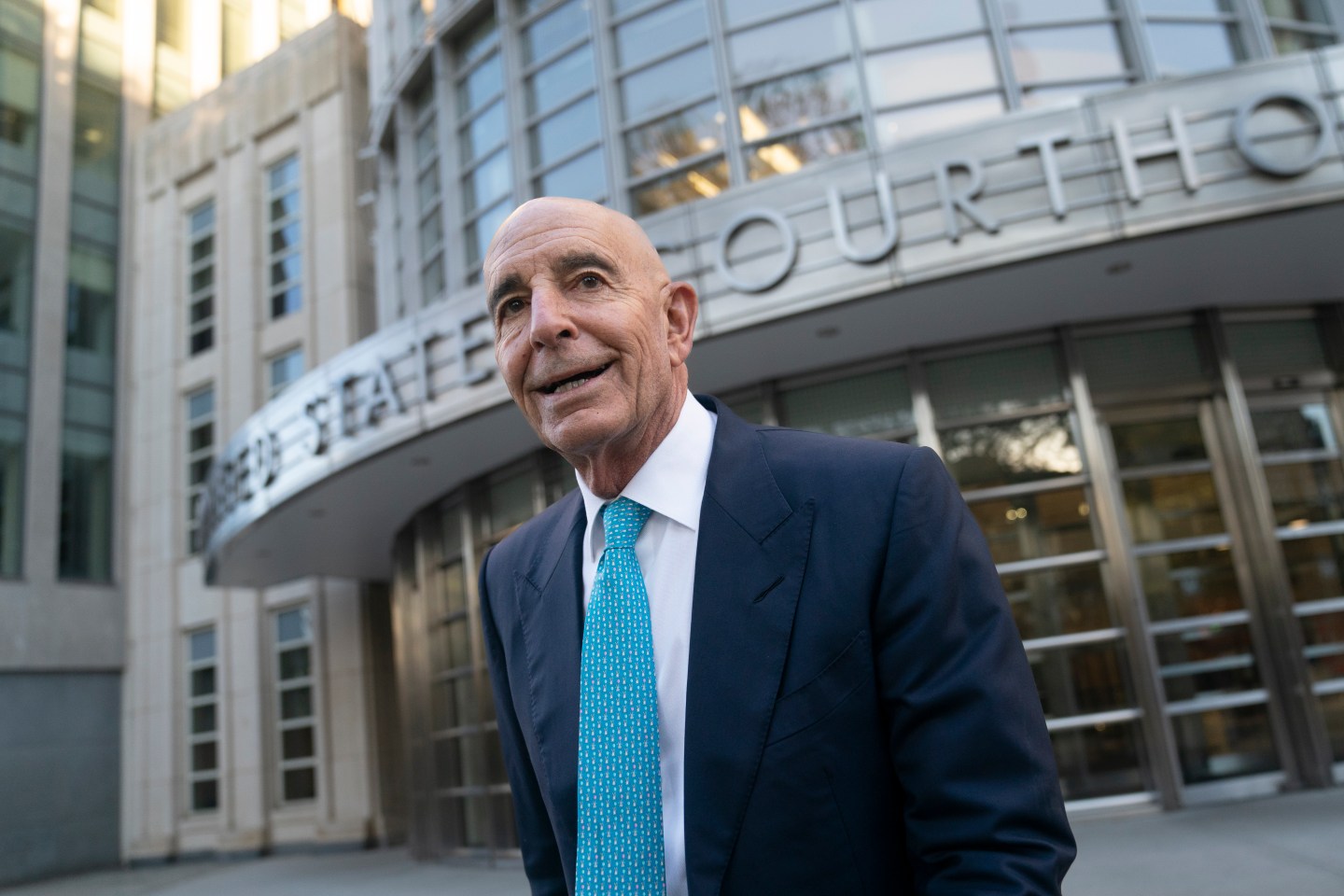 Donald Trump’s inaugural committee chair, Tom Barrack, was acquitted of all counts Friday at a federal trial in which he was accused of using his personal access to the former president to secretly promote the interests of the United Arab Emirates.

The jury in Brooklyn deliberated three days before finding Barrack not guilty of acting as an unregistered agent of a foreign government, obstruction of justice and making false statements. Barrack had vehemently denied the charges.

Barrack, a 75-year-old California billionaire, is an old friend of Trump and chaired the Republican’s inaugural committee. He was among a long line of Trump associates to face various criminal charges.

The verdict touched off a tearful celebration among Barrack and his supporters, who took group photos in the courtroom.

“I’m so thankful for this system,” Barrack said, expressing appreciation for the jury.

One of Barrack’s assistants, Matthew Grimes, was also acquitted.

Barrack’s acquittal was the latest setback for the Justice Department, which in recent years has stepped up enforcement of laws governing foreign lobbying.

Last month, a judge dismissed a lawsuit that sought to force casino magnate Steve Wynn to register as a foreign agent because of his alleged lobbying at the behest of the Chinese government during the Trump administration.

In 2019, lawyer Greg Craig, a Democrat, was acquitted of making a false statement to the Justice Department about work he did for the Ukraine’s government.

In closing arguments Tuesday, Assistant U.S. Attorney Ryan Harris told jurors that Barrack schemed to become the “eyes, ears and the voice” for the Emirates as part of a criminal conspiracy to manipulate Trump’s foreign policy.

At the same time, he leveraged his back-channel connections to get the UAE to funnel tens of millions of dollars into an office building he was developing and into one of his investment funds, Harris added.

The prosecutor pointed to what he characterized as a steady steam of shady texts and other communications that showed that Barrack was under the direction and control of Rashid al Malik, a businessperson from the UAE who acted as a conduit to the rulers the oil-rich Persian Gulf state.

Al Malik asked Barrack “to do things for the UAE again and again,” he said.

Defense attorney Randall Jackson said Barrack made no attempt to conceal his relationships with Al Malik, someone in a network of business connections he had cultivated throughout the Middle East. He also said it “makes no sense” that his client would try to infiltrate the Trump campaign on the behalf of the UAE at a time when Trump’s chances of winning the presidency were considered a longshot.

“He was involved in the campaign because he’s loyal to his friends — maybe to a fault,” the lawyer said.

Last week, Barrack testified that “dozens” of people asked him for help in getting pardons from the former president. He also said he never sought a pardon for himself, even after he learned he was under investigation.

Asked why, he responded, “I never did anything wrong.”

Barrack, an Arabic speaker of Lebanese descent, also described efforts to arrange for Trump to meet with UAE national security adviser Sheikh Tahnoun bin Zayed Al Nahyan and other officials from more moderate governments in an effort to persuade Trump to tone down his his anti-Muslim rhetoric.

“I was trying to get common ground, to try to get him to step back from what he didn’t believe,” he said.

The defense called former Treasury Secretary Steven Mnuchin to testify there was nothing suspicious about his interactions with Barrack over Trump’s stance on UAE relations. Mnuchin described Barrack as a friend who was among hundreds of businesspeople offering him “thoughts and advice” while he served in the Cabinet. In those discussions, “I would never share anything … that I thought was confidential,” he testified.

Before being indicted, Barrack drew attention by raising $107 million for the former president’s inaugural celebration following the 2016 election. The event was scrutinized both for its lavish spending and for attracting foreign officials and businesspeople looking to lobby the new administration.