Meet the man who spent $50,000 decorating his yard for Halloween 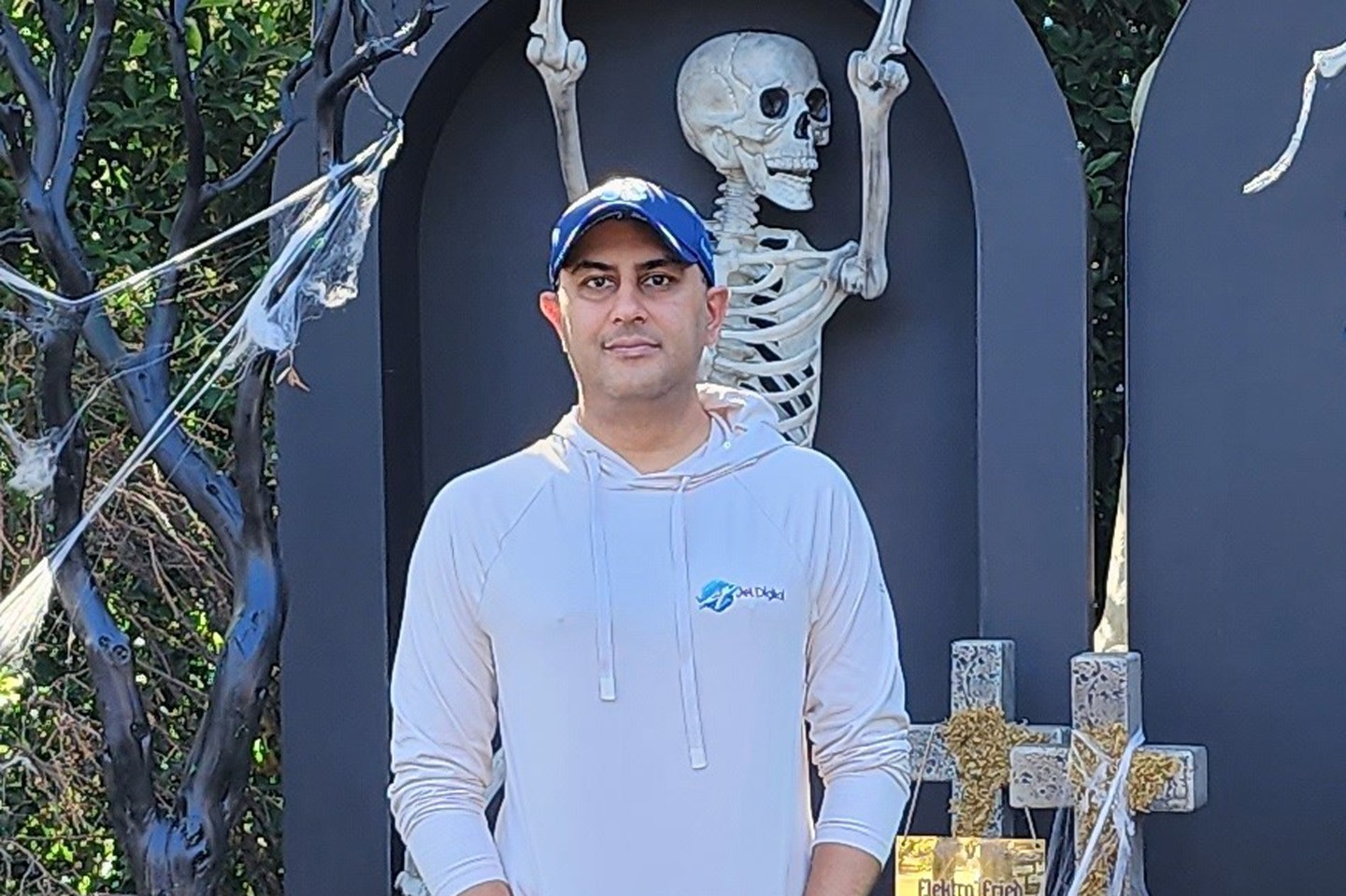 Ace Rogers in front of his Halloween display.
Courtesy of Ace Rogers

The unexpected appearance of two commercial semitrailers in Ace Rogers’s driveway earlier this week triggered a series of concerned voicemails from friends wondering if the 47-year-old had suddenly decided to pack up and move his family from out of the sprawling La Jolla home he’d purchased just 18 months ago.

But Rogers, who also goes by the name Ajay Thakore, was too busy to return the calls.

He figured it wouldn’t be long until everyone in his Southern California enclave would know exactly what he was up to anyway: installing a high-end Halloween experience in his front yard for a cool $50,000.

In the past, Rogers has pulled out all the stops, sparing no expense for Christmas, but this is the first time he’s commissioned a professional installation for Halloween.

“I like to keep people wondering. No one knows exactly when or what I’ll do next, but my neighbors have come to expect this sort of stuff from me,” Rogers told Fortune.

The theme of Rogers’s display this year is “The Aspen Family,” named in honor of his three-legged rescue dog, Aspen, and inspired by The Addams Family, which first debuted on ABC TV in 1964 and featured a bizarre, wealthy family who seemingly reveled in the macabre.

The display, which took two full days for 20 people to set up, was completed on Oct. 22 and will remain in place through Nov.  2 and is open to the public.

“Whatever Ace does, he does it big,” said Khash Moghadam, one of the co-owners of Wildhouse Ink, the creative studio Rogers hired to design, produce, and build out the Halloween activation.

The installation features a massive red curtain pulled back to reveal large, framed caricatures of Rogers, his fiancée Ashley, and their 9-month-old daughter Delilah. It also includes oversize skeletons flanking the driveway and a few life-size skeletons sitting at a large table, a human-size birdcage, a mini graveyard, and a throne where people can sit down and pose for photos.

While Rogers knew he wanted to make a splash this Halloween, he handed the creative reins over to Wildhouse to deliver a theme and see it through to completion.

The company was already well aware of the most important aspects of his life—his new family and canine sidekick—and so they built a theme around them.

Normally, Rogers says, the family keeps the front gate in front of their home closed, but they’re keeping it open through Halloween so that anyone walking by can check out the outdoor display.

“It brings a smile to my face seeing all the joy this brings to the community. That’s really why I do it. I was ready to spend $100,000 but we wound up coming in at $50,000,” said Rogers, who says he’s also likely to do another elaborate display around Christmastime.

Last Halloween Rogers didn’t do much in terms of decorating and estimates he had 100 trick-or-treaters come to his door. But this go-around he expects closer to 400-500, and he’s ready for them.

“As a kid, everyone always knows the house that gives out full-size candy bars and wants to go there. We are that house. I mean, you can’t put up a display like this and not give out good candy, right?” said Rogers, laughing.

Ace Rogers (right) with his fiancee Ashley, their daughter, and their dog Aspen.
Courtesy of Ace Rogers

Why does he do it?

From holidays to birthdays to a March Madness Extravaganza, Rogers has taken a page from the Go Big or Go Home playbook, frequently hosting lavish, large-scale affairs to entertain friends and family as well as to reward his team at Doctor Multimedia, the medical marketing agency he owns and operates.

As for this latest installation, the new father told Fortune he was inspired to do something for the children in the neighborhood.

As for his own costume?  Rogers says no decisions have been made. He told Fortune he’s waiting for Ashley to tell him what he’s dressing up as.

Aspen will most likely don a pair of fangs to greet guests.

No one has ever directly complained to Rogers or given him any pushback regarding his over-the-top decorations, though he said there’s always that one anonymous person who gets behind his/her keyboard and goes online to a neighborhood forum to complain about how traffic is slowing down by the house and how it’s likely to cause an accident.

“That’s a real Grinch to me,” said Rogers. “Most people approach me and say the same two words all the time: ‘What’s next?’ But they’ll have to stick around and see because I like the element of surprise too much to give any hints away.”

Ace Rogers in front of his Halloween display.
Courtesy of Ace Rogers