After weeks of review, Adidas concludes it ‘does not tolerate anti-Semitism’ and cuts ties to Kanye West—with a $246 million hit 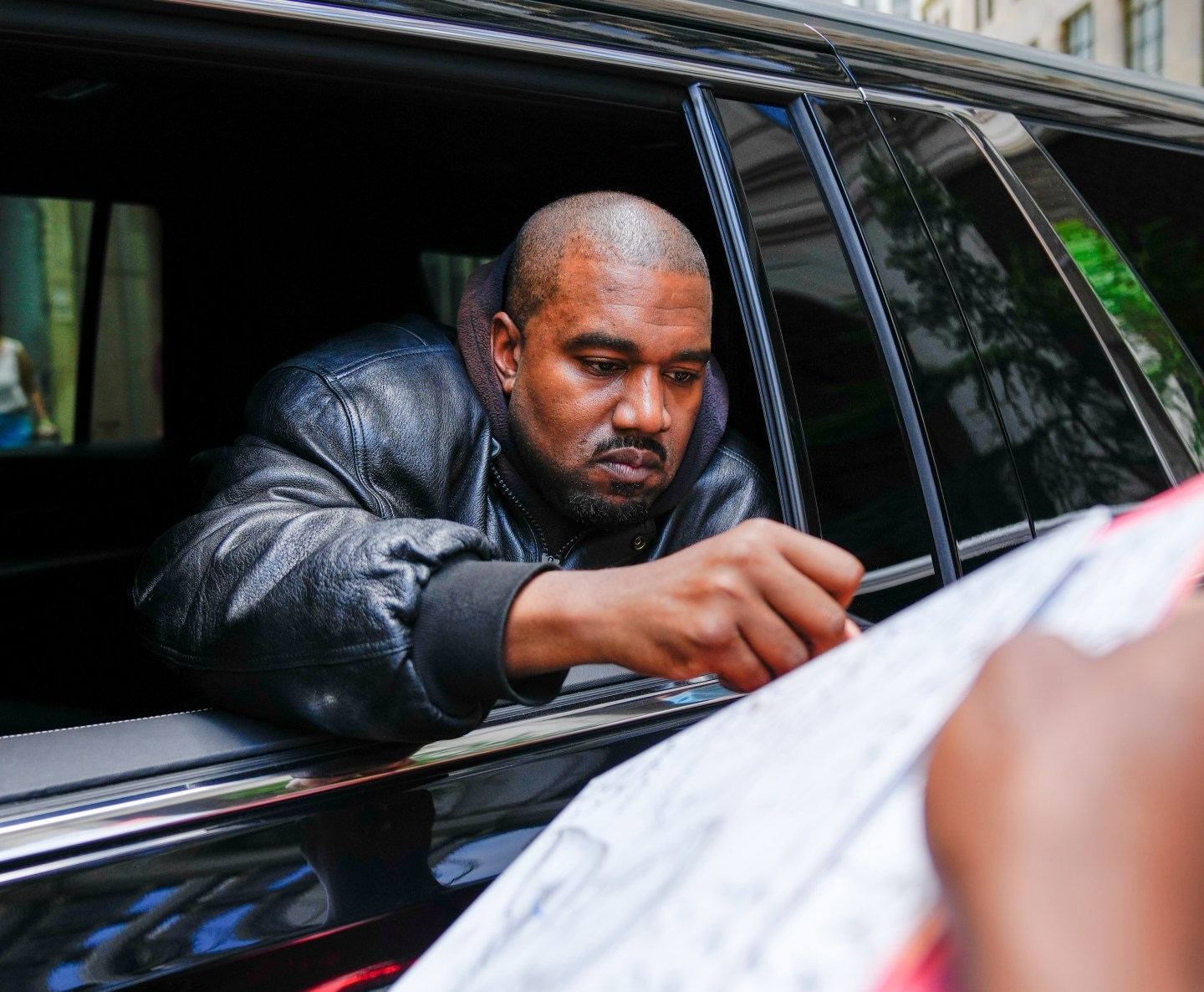 Adidas ended a partnership that helped make the artist formerly known as Kanye West a billionaire and lent the German sportswear an edgy appeal, but ultimately couldn’t survive a mounting outcry over the rapper’s offensive and antisemitic remarks.

The split will leave Adidas searching for another transcendent celebrity to help it compete with ever-larger rival Nike, but will likely prove even costlier for Ye, as the rapper is now known. The sneaker giant became the latest company to cut ties with Ye, whose music career has been in decline as he courted controversy.

Adidas said it expected to take a hit of up to 250 million euros ($246 million) to its net income this year from the decision to immediately stop production of its line of Yeezy products and stop payments to Ye and his companies. Its shares closed down more than 2% on Tuesday.

“Adidas does not tolerate antisemitism and any other sort of hate speech,” the company said in a statement Tuesday. “Ye’s recent comments and actions have been unacceptable, hateful and dangerous, and they violate the company’s values of diversity and inclusion, mutual respect and fairness.”

For weeks, Ye has made antisemitic comments in interviews and social media, including a Twitter post earlier this month that he would soon go “death con 3 on JEWISH PEOPLE,” an apparent reference to the U.S. defense readiness condition scale known as DEFCON. He was suspended from both Twitter and Instagram.

Ye expressed some regret in an interview with podcaster Lex Fridman posted online Monday, in which he characterized his initial tweet as a mistake and apologized to “the Jewish community.” An email message sent to a representative for Ye was not immediately returned.

Adidas has stuck with Ye through other controversies over his remarks about slavery and COVID-19 vaccines. But Ye’s antisemitic comments stirred up the company’s own past ties with the Nazi regime that the company had worked to leave behind. The World Jewish Congress noted that during World War II, Adidas factories “produced supplies and weapons for the Nazi regime, using slave labor.”

Jewish groups said the decision to drop Ye was overdue.

“I would have liked a clear stance earlier from a German company that also was entangled with the Nazi regime,” Josef Schuster, president of the Central Council of Jews in Germany, the main Jewish group in the country where Adidas is headquartered.

Adidas, whose CEO Kasper Rorsted is stepping down next year, said it reached its decision after conducting a “thorough review” of its partnership with Ye, whose talent agency, CAA, as well as Balenciaga fashion house had already dropped the rapper. In the hours before the announcement, some Adidas employees in the U.S. had spoken out on social media about the company’s inaction.

“The positives are so substantial in terms of the audience it appeals to — younger, urban, trendsetters, the size of the business,” Adamson said. “I’m sure they were hoping against hope that he would apologize and try to make this right.”

Adidas doesn’t break out Yeezy sales numbers, but the impact will be more severe than expected given that the brand has ended production of all Yeezy products and ceased royalty payments, according to Morningstar analyst David Swartz in a note published Tuesday.

Swartz projects overall Adidas revenues to reach $23.2 billion euros ($23.1 billion) this year, with the Yeezy brand generating 1.5 billion to 2 billion euros ($1.99 billion), or nearly 10% of the total. The pricy brand accounts for up to 15% of the company’s net income, Swartz said.

Forbes estimated that Adidas accounted for $1.5 billion of Ye’s net worth and without the deal, it will fall to $400 million, including his music catalog, real estate, cash and a stake in ex-wife Kim Kardashian’s shapewear company Skims. Forbes said it will no longer include Ye on its list of billionaires, though the rapper has long insisted the magazine underestimates his wealth.

Ye has alienated even ardent fans in recent years. Those close to him, like Kardashian and her family, have ceased publicly defending him after the couple’s bitter divorce and his unsettling posts about her recent relationship with comedian Pete Davidson.

Carl Lamarre, Billboard’s deputy director of R&B/Hip Hop, said many Ye fans have been disappointed by him, but the implosion of his business endeavors was difficult to watch for those who admired the rapper’s ability to reach new heights of success beyond hip-hop.

“This is someone who potentially laid down the blueprint for a lot of musicians coming up,” Lamarre said. “When you see someone graduate to his level of superstardom and transcend into business, into fashion and touches that billionaire point, for our community, for hip-hop, for African Americans, that’s very aspirational.

“But the same kids, even myself who were once super-fans, you try to defend him but every day he gives you a reason not to be able to,” Lamarre added.

The rapper, who has won 24 Grammy Awards, has been steadily losing audience on the radio and even his streaming numbers have declined slightly over the last month. According to data provided by Luminate, an entertainment data and insights company whose data powers the Billboard music charts, his airplay audience has slipped from 8 million in the week ending Sept. 22, to 5.4 million in the week ending on Oct. 20. The popularity of his songs on streaming on demand also went down in the same period, from 97 million to 88.2 million, about a 9% drop.

Ye has earned more of a reputation for stirring up controversy since 2016, when he was hospitalized in Los Angeles because of what his team called stress and exhaustion. It was later revealed that he had been diagnosed with bipolar disorder.

He has suggested slavery was a choice and called the COVID-19 vaccine the “mark of the beast,” among other comments. He also was criticized earlier this month during Paris Fashion Week for wearing a “White Lives Matter” T-shirt to the show and putting models in the same design. After he was suspended from Twitter and Facebook, Ye offered to buy Parler, a conservative social network with no gatekeeper.

The fashion, music and apparel world continued to distance themselves from Ye on Tuesday.

Foot Locker said it was cutting ties with the Yeezy brand and pulling Yeezy shoes from its shelves and online sites. Gap said it will remove Yeezy Gap product from its stores shut down yeezygap.com. Universal Music Group, which owns the Def Jam label, said Tuesday in a statement that Ye’s music and merchandise contracts ended last year. MRC studio had announced Monday that it is shelving a complete documentary about the rapper.

A Vogue spokesperson confirmed Tuesday that the magazine and its global editorial director, Anna Wintour, have no intentions of working with Ye again after his most recent controversial remarks and behavior.

Jewish groups have pointed to the danger of the rapper’s comments at a time of rising antisemitism. Jonathan Greenblatt, CEO of the Anti-Defamation League who on Tuesday applauded the decision by Adidas to drop Ye, said his organization has documented a tripling of harassment, vandalism or violence targeting Jews since 2015.

“We’re operating in an environment today where antisemitism is empirically on the rise,” Greenblatt said. “When people with large platforms give license to antisemitism and other forms of bigotry, it creates an environment where these kinds of activities have a degree of permission they might not have had before.”

Lamarre said he understood that Ye was suffering from mental health and personal issues, but that only makes it more important to pause and reconsider giving him a platform for his offensive comments.

“We are watching someone who was a beloved superhero in the African American community spiral in front of our eyes,” he said. “But this is someone who is kind of falling on his own sword.”