Why are Gen Z activists throwing soup on a famous painting? ‘We’re doing these actions to get media attention because we need to get people talking’ 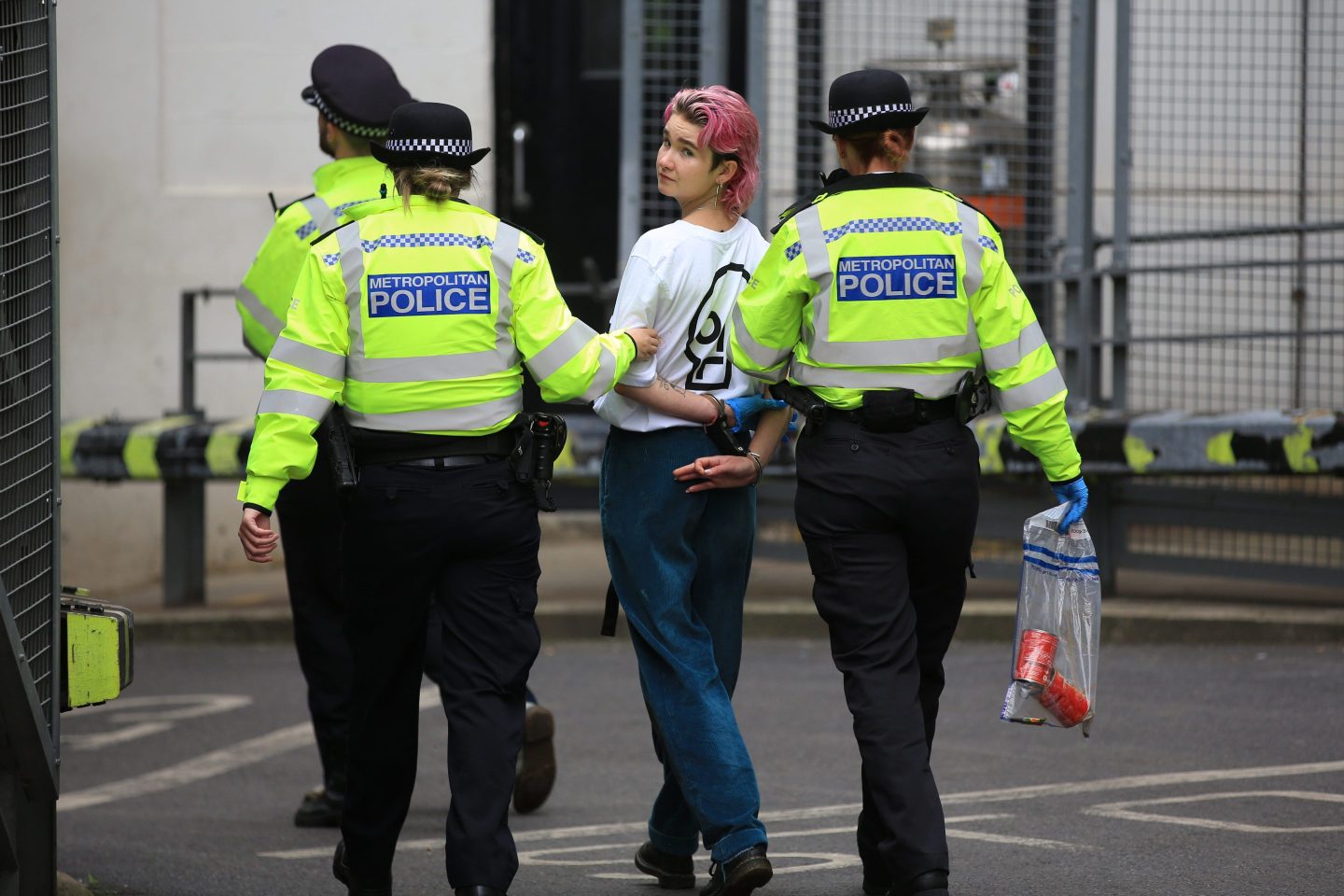 A Just Stop Oil activist is arrested after throwing soup on van Gogh’s “Sunflowers” at the National Gallery in London.
Martin Pope—Getty Images

Both women, ages 20 and 21, who are members of the Just Stop Oil activist group, have since been charged with criminal damage. Their goal was to get people talking about environmental and climate issues. The group as a whole has called on the U.K. government to halt future licensing of fossil fuel exploration, development, and production.

Just Stop Oil activists glue their hands to the wall after throwing soup at van Gogh’s painting “Sunflowers” at the National Gallery in London, Oct. 14.
Just Stop Oil/Handout via REUTERS

“We’re doing these actions to get media attention because we need to get people talking about this now,” one of the protesters, Phoebe Plummer, said in a video. “And we know that civil resistance works. History has shown us that it works.”

“Is art worth more than life? More than food? More than justice?” The group tweeted alongside a photo of the two protesters. “The cost-of-living crisis and climate crisis is driven by oil and gas.”

Plummer said she recognizes that it seems ridiculous to cover a famous painting in soup, and stressed that she would have never done it if the painting wasn’t encased in glass. The oil painting wasn’t damaged by the soup throwing, but its frame was.

The National Gallery released a statement after the protest, confirming that the “painting is unharmed,” despite “minimal damages to the frame.” The museum did not address the politics behind the protest.

“We’re not asking the question ‘Should everybody be throwing soup on paintings?’” Plummer said. “What we’re doing is getting the conversation going so we can ask the questions that matter.”

To her that means asking why the U.K.’s recently appointed prime minister, Liz Truss, is approving over 100 new fossil fuel licenses. Why are fossil fuels subsidized 30 times more than renewables, when offshore wind is nine times cheaper? And why, when winter comes, will people be forced to choose between “heating and eating”?

Countries worldwide are coping with rising economic problems, but the U.K. has been hit particularly hard. Its central bank is raising interest rates aggressively to reduce high inflation, and Truss’s economic plan recently sent stocks plummeting and pushed the pound to a record low.

The U.K. conservatives, who are currently in power, have long been friendly toward fossil fuel production. And with the worsening energy crisis after Russia cut its supply of natural gas to Europe, sparking fears for the winter, U.K.’s conservatives have become even friendlier toward Big Energy.

The conversation about climate change needs to happen now, Plummer said, because there’s no time to waste—referencing Sir David King, a British chemist who leads the Climate Crisis Advocacy group, and who said, “What we do in the next three to four years will determine the future of humanity.”

And Plummer and her fellow activist throwing soup onto a painting has done just that—people are talking about it. Videos of the two women have gone viral on social media, with one video having over 11 million views. It even sparked debates on Twitter—with some commenters applauding them and others criticizing what they did to the painting.

“I’m struggling to understand why destroying a painting of sunflowers done by van Gogh, an impoverished man who was marginalised in his local community due to his mental illness, is the right target to make a statement about how awful the oil industry is,” one Twitter user wrote, garnering more than 100,000 likes.

Others who commended the protesters, meanwhile, suggested the backlash indicates how some people view the issues at hand.

“Say what you will about the Soup Van Gogh action, I cannot think of a more efficient way of revealing people’s priorities and whether they feel climate breakdown and mass extinction is genuinely an emergency,” Peter Kalmus, a NASA climate scientist tweeted. “Like an x-ray into people’s minds.”