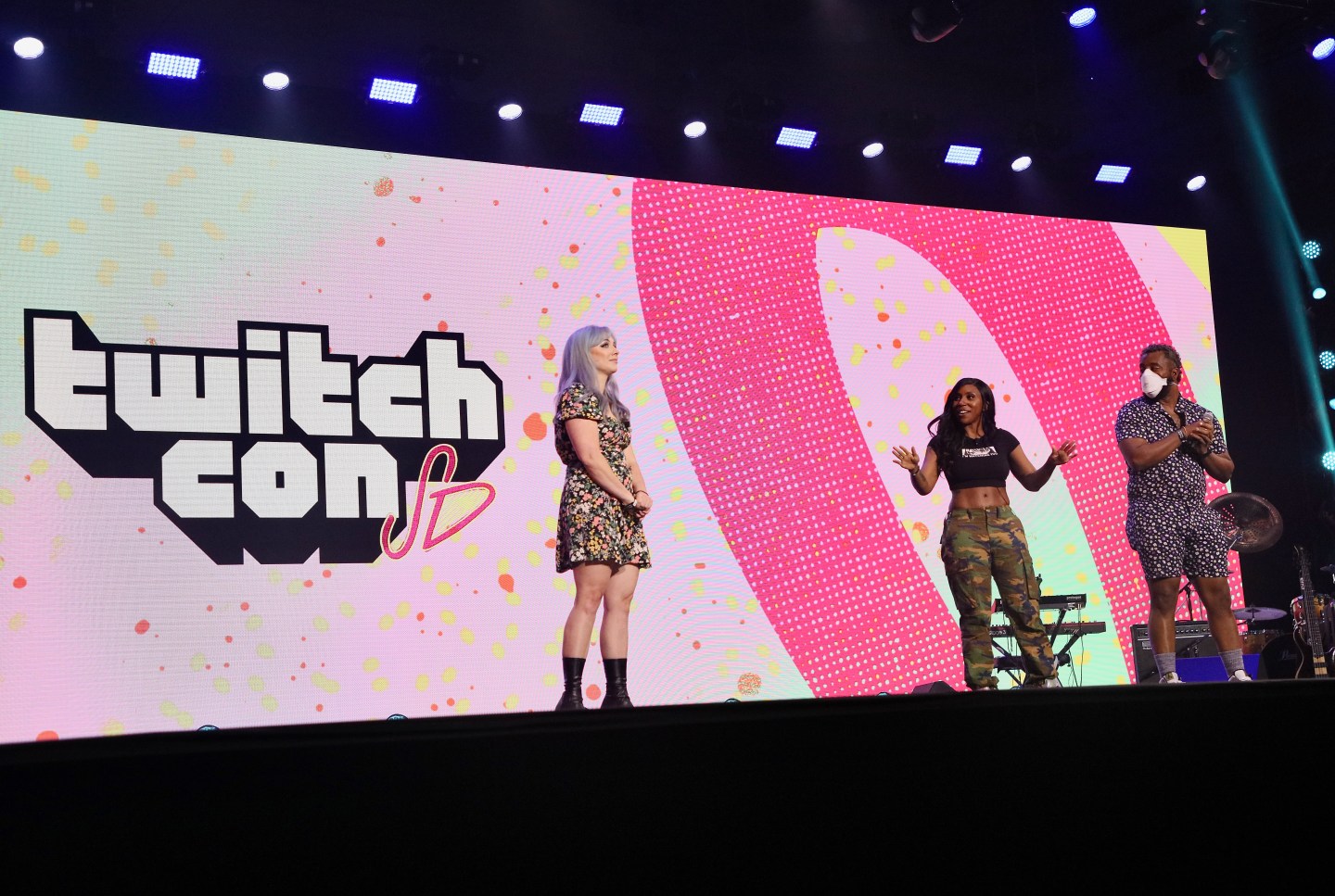 Twitch’s director of community, Mary Kish (L), said TwitchCon in San Diego she had tough conversations with streamers. “I really empathize with them. This is their lives, their careers; they pay for their houses and feed their children with this money.”
Robin L Marshall—Getty Images

Twitch’s director of community, Mary Kish, said that during the weekend convention in San Diego she had tough conversations with streamers over dinners and drinks. “I really empathize with them. This is their lives, their careers; they pay for their houses and feed their children with this money,” said Kish, who is a popular streamer herself. “These decisions are meant for long-term sustainability for both parties.”

Last month, Twitch announced that starting next June, it’s adjusting its revenue sharing model so that top streamers will keep 70% of revenue for the first $100,000 earned on the site through fans’ subscriptions, but that will drop to the standard 50/50 share split after that. The change was intended to remove inconsistencies in how Twitch arranged these deals, President Dan Clancy said in a blog post at the time.

Increasingly, Twitch has been focused on financial sustainability with the goal of eventual profitability despite enormous costs tied to the technology necessary to support the 2.5 million hours of live content broadcast around the world daily. But the changes, including the revenue split and incentivizing streamers to run ads, have proven unpopular with the content creators that Twitch considers its primary customers.

At TwitchCon, executives and streamers met face-to-face and attempted to come to an understanding. Some sessions gave streamers the opportunity to directly approach Twitch staff about their monetary concerns. There were about 20 panels and sessions aimed at teaching streamers how to earn more money, grow their brands and gain enough popularity to attract sponsorships. Some focused on how to graduate from “affiliate” to “partner” status, a level that allows streamers to earn revenue through subscriptions and ads, and how to continue to monetize their business from there.

The pool of breakout streaming stars able to pull in hundreds of thousands or even millions of dollars has become increasingly competitive after Twitch’s pandemic boon. The number of active streamers on the site has more than doubled since September 2019 to more than 7 million. The company has made moves to help more streamers make money, like lowering the level at which a streamer can withdraw revenue to $50 from $100, and rolling out products that Twitch says have boosted streamers’ revenue per hour by 27% over the last five years. But many streamers feel that Twitch has compromised their potential for profitability in exchange for the company’s own.

“They need to start listening to us and actually take us seriously,” said a partnered streamer who goes by Vio, who spoke directly to Twitch staff over the weekend. She said if anything, TwitchCon helped her bond with other streamers who share her frustrations. “Execs haven’t done anything to build trust, but I’m feeling more and more bonded with other people in the same boat.”

Although the recent changes only affect a small percentage of Twitch’s more than 50,000 partnered streamers, those who are the most popular and bring in the most revenue, backlash followed from people who felt Twitch had taken away a potential future financial opportunity to aspire to.

“When you look at your career, you’re not like, ‘I made it,’ and then never try to get a promotion again,” Kish said. “It’s similar with creators. They want to know what the next step is. We have a lot of work to do internally to be like, ‘What is the next step?’”

Executives addressed streamers’ monetary concerns privately and in a public session Sunday afternoon that was livestreamed. Although nearly 23,000 Twitch users have asked Twitch to move to a 70/30 revenue model for all streamers, Twitch Vice President of monetization Mike Minton told the audience that it “is simply is not viable for Twitch over the long-term.”

Minton pointed to Amazon’s desire for Twitch to be independently sustainable. “Amazon expects the same thing of us as every Amazon business: that we’re able to thrive independently and financially,” Minton said. He declined to share any specific expectations or timelines from Amazon about profitability. He also acknowledged that Twitch doesn’t pay public rates for Amazon Web Serivces. Last month, in outlining the revenue sharing changes, Clancy cited the published rates as evidence of the costs of running Twitch’s service.

Twitch has shifted its focus to running ads, a strategy that will boost streamers’ revenue but some complain that it’s not compatible with livestreaming.

“Many streamers weren’t open to running ads because it wasn’t worth it to them,” Minton said. Twitch is working on making ads less intrusive and is experimenting with skippable ads.

One Twitch partner and TwitchCon attendee who goes by Vcruzzin said the ads incentive doesn’t align with his goals as a streamer. He wants to keep viewers engaged, and losing their interest isn’t worth it to him right now. “I do not plan on manually playing ads unless my ad incentive offer is something that will financially significantly help my family and I,” he said.

At the same time, Vcruzzin did attend TwitchCon’s live event addressing streamers’ concerns about monetization and left feeling more trust in the company. “There were a lot of things said that did give me confidence in the direction of where the company is going,” he said, adding, “No company is perfect.”