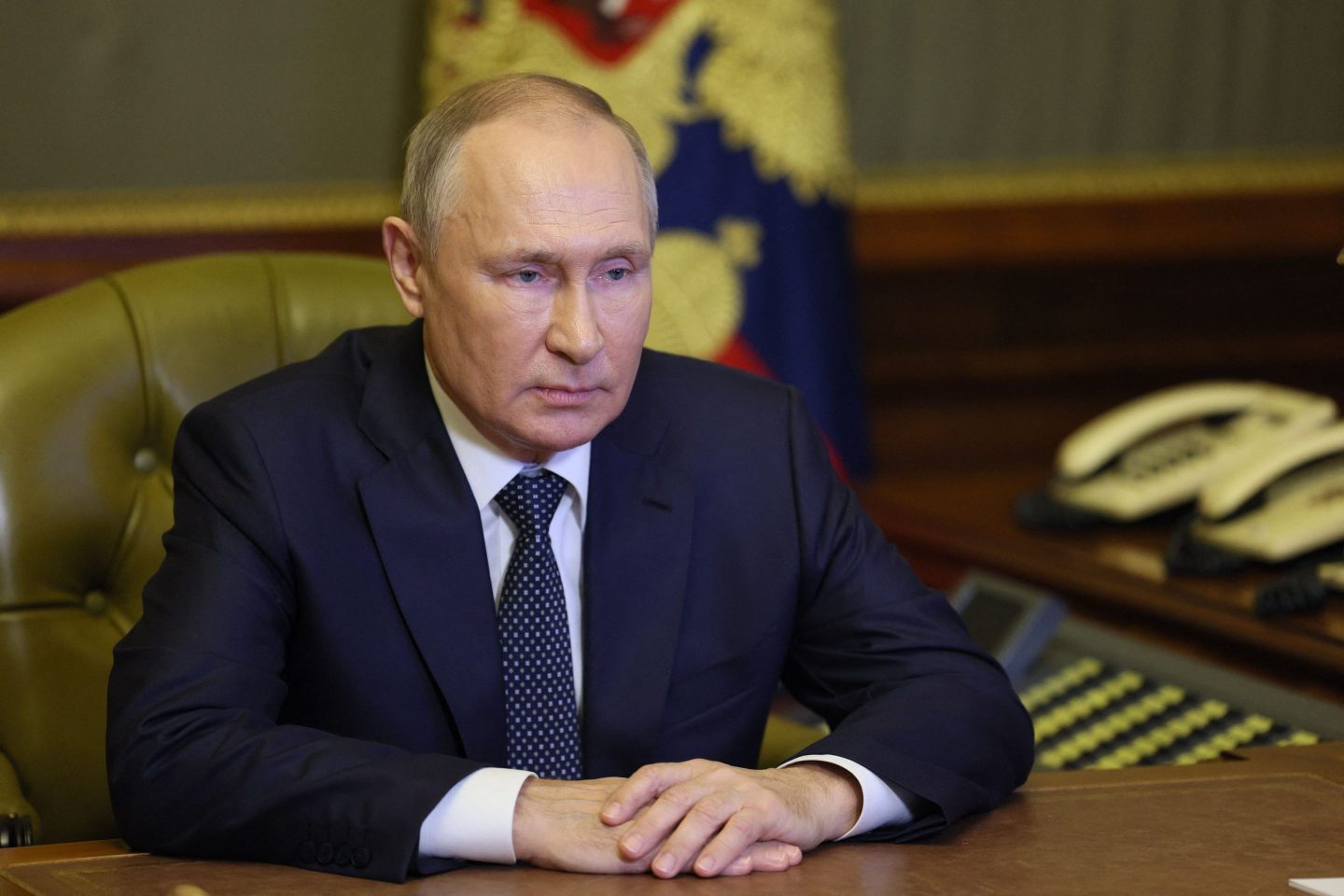 President Vladimir Putin threatened further missile attacks on Ukraine after Russia hit Kyiv and other cities in the most intense barrage of strikes since the first days of its invasion, marking a dangerous new escalation in the war.

Monday’s bombardment came a day after Putin accused Ukrainian forces of carrying out an explosion that damaged a flagship road and rail bridge connecting Crimea to Russia. Ukraine hasn’t officially claimed responsibility for the blast.

“If attempts to commit terrorist acts on our territory continue, the responses from Russia will be harsh and their scale will correspond to the level of threat to Russia,” Putin said in televised comments to a meeting of his Security Council on Monday. “No one should have any doubts.”

Putin said “massive strikes” targeted energy and communications infrastructure in Ukraine, as well as military command installations. His claims were undermined by evidence on social media of missiles hitting Kyiv’s most popular park, a prominent pedestrian bridge and other civilian infrastructure in the center of the capital.

The broad burst of firepower prompted an international outcry, with Group of Seven leaders expected to hold an emergency videoconference with Ukrainian President Volodymyr Zelensky to address the attack on Tuesday. Intentional targeting of civilian populations is a “war crime,” French Foreign Minister Catherine Colonna said on Twitter.

“They are trying to destroy us and wipe us off the face of the Earth,” Zelensky said on his Telegram channel, urging people to stay in bomb shelters as air-raid alerts sounded in every region of the country except occupied Crimea. “Unfortunately there are dead and wounded.”

Eleven people were killed and 64 wounded in the attacks, Ukraine’s emergency service said on Telegram. Russia launched 84 missile strikes at Ukraine and 24 drone attacks including with Iranian-made Shahed-136, and air defenses downed about half of them, Ukraine’s General Staff reported.

United Nations Secretary-General Antonio Guterres is deeply shocked by Russia’s large-scale missile attacks on Ukrainian cities, which constitute “another unacceptable escalation of the war,” his spokesman Stephane Dujarric said in an emailed statement.

At least 10 explosions were reported in Kyiv, and Russian forces continued a missile assault on the southern city of Zaporizhzhia, following strikes that local authorities said had killed at least 14 people a day earlier. Explosions also took place in Odesa, Dnipro and Lviv in Ukraine’s west, far from the front lines.

Ukraine’s power grid operator Ukrenergo introduced rolling blackouts in Kyiv and three other regions because of damage from the attacks, and urged residents to reduce energy use on Monday evening in a statement on Facebook. Infrastructure facilities were hit in eight regions, state emergency service spokesman Oleksandr Khorunzhyi said on television.

The attacks on infrastructure represent “a deep change” in the war, Macron said during a visit to western France, adding that he’d summon his military and diplomatic advisers later Monday “to review the situation.”

Amid the sudden upsurge in violence, the president of the United Arab Emirates will go to Russia on Tuesday to meet with Putin, the two countries said. Putin and Sheikh Mohammed Bin Zayed Al Nahyan will discuss regional and international issues of common interest, the UAE’s state-run WAM agency said.

The multibillion-dollar Crimea bridge was a signature project for Putin and intended to symbolize Russia’s annexation of the Black Sea peninsula in 2014. Likening Ukraine’s government to “an international terrorist organization,” the president accused Kyiv of attempting attacks on the Kursk Nuclear Power Plant as well as gas pipelines.

Russian authorities have said they’ve resumed rail services on the bridge following the explosion on Saturday, a day after Putin marked his 70th birthday. The link that stretches for 19 kilometers (12 miles) across the Kerch Strait is an important route for the Kremlin to resupply its forces in Crimea and in the southern Kherson region of Ukraine, where Russian troops are facing a Ukrainian military counteroffensive.

The missile strikes came after Russia’s Defense Ministry announced the appointment of a new commander of its invasion forces in Ukraine, Air Force General Sergei Surovikin, following a series of recent military reverses. In the past he led Russian forces in Syria, where Kremlin troops carried out a bombardment campaign that destroyed much of Aleppo, the country’s second-largest city.

In a signal that the nearly eight-month-old conflict is expanding, Belarusian President Alexander Lukashenko said his nation and Russia agreed to deploy a regional grouping of armed forces. Russia has used Belarus as a staging point for its invasion, but Belarusian troops have so far stayed out of the war.

The attacks on Kyiv and other population centers means “we’ve entered a period of escalation” in Russia’s war, said Alexei Chesnakov, a former senior Kremlin official and adviser on Ukraine policy.

The foreign minister of Moldova, a former Soviet republic wedged between Romania and Ukraine, said three cruise missiles launched on Ukraine by Russian ships in the Black Sea illegally crossed its airspace. The Russian envoy was summoned, Minister Nicu Popescu said on Twitter.

Pro-Kremlin voices who’d urged Putin to respond harshly to the Crimea bridge explosion welcomed the strikes. “The place of the Devil is burned with fire,” Sergei Markov, a political consultant to the presidential staff, said Monday on Telegram, where he posted video footage of the bombardment of central Kyiv.