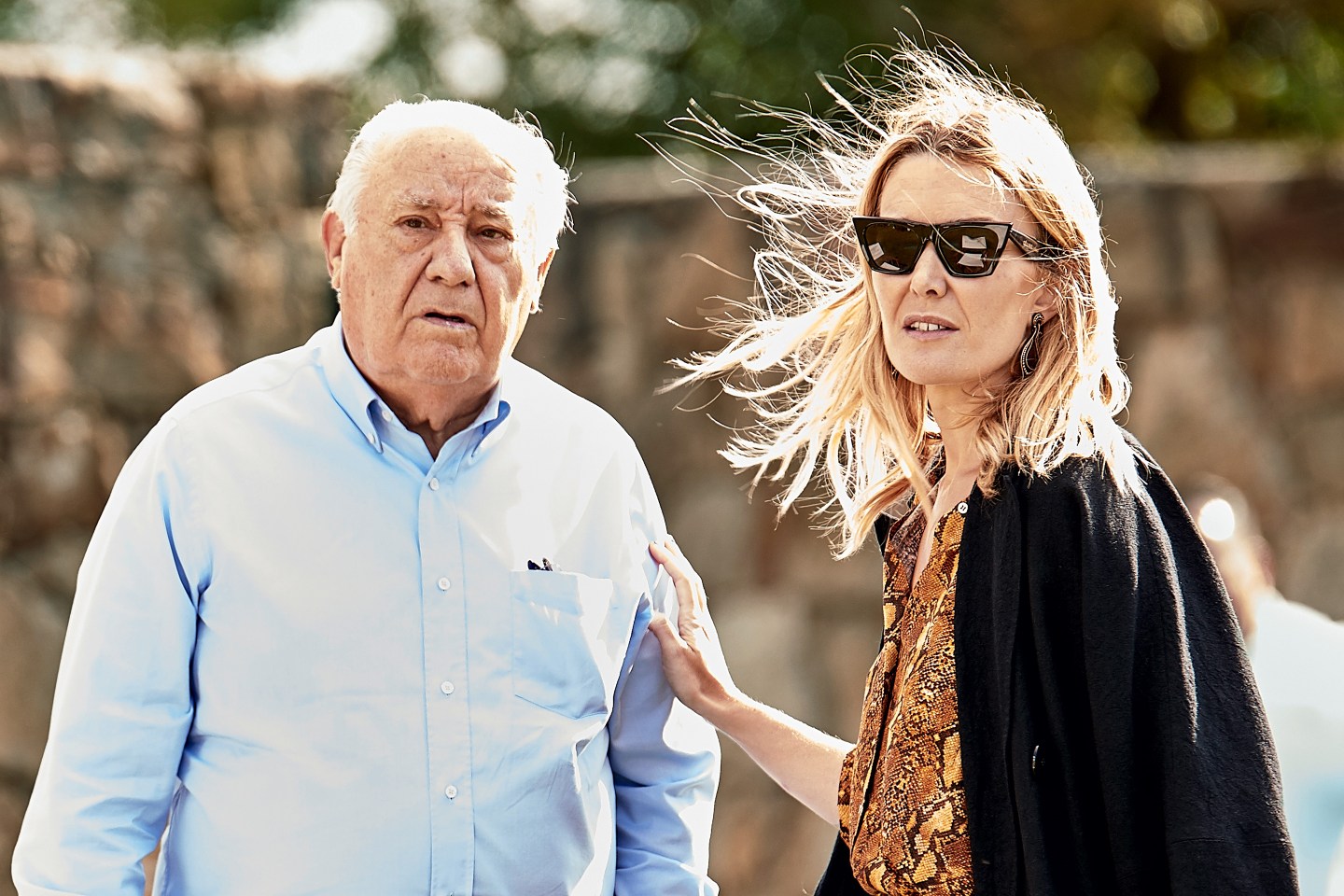 – Race to sustainability. If you ever find yourself on the Oscars red carpet, as I have as a journalist, you’ll find the press repeatedly barking out one phrase to passing Hollywood stars: “Who are you wearing?”

It’s a tricky question these days, with an often controversial answer. That was evident when I spent two days inside the sprawling headquarters of Zara—the world’s biggest fashion retailer—on the windswept coast of northwest Spain for Fortune‘s Most Powerful Women issue.

For me, it was a return visit. Exactly 10 years ago, I traveled to this small Galician city of La Coruña for Fortune to profile Amancio Ortega, the iconic founder of Zara and its giant parent company Inditex. A lot has changed since then. Zara has rocketed in size and, by some estimates, makes a mammoth 450 million items a year. And Amancio, now 86, no longer runs his $33-billion empire. He handed the reins last April to his youngest daughter Marta, 38, and named her nonexecutive chairperson.

The young Ortega’s ascent came just two years after Inditex’s nearest competitor, Sweden’s H&M, anointed Helena Helmersson as its first woman CEO. With the breaking of the proverbial glass ceiling at the two biggest fast-fashion giants, there seemed to be a fundamental power shift for the $1.7-trillion industry.

But does a shift in gender mean a shift in strategy? That question seems increasingly urgent. Marta and Helena (as everyone I interviewed referred to them) sit at the vortex of global crises—climate, inequality, and human rights—which were barely mentioned when I visited Inditex a decade ago.

As our Zara story shows, the fashion industry consumes vast quantities of fossil fuels, land, and water and generates significant carbon emissions. Factory accidents and abuse in countries like Bangladesh and Pakistan have highlighted ultra-low wages and free-for-all conditions. And since Zara and H&M roll out never-ending, affordable new designs, we’re tossing out our clothes more frequently, with disastrous consequences: The World Bank estimates about 87% of all fashion is incinerated or landfilled.

It’s tempting to think that as women, Ortega and Helmersson will shake up a business dominated by women, from factory workers to sales assistants, customers, and even runway models. “It is the same supply chain, whether you are sitting in your shitty, miserable flooded hole in Pakistan, or in the glossy headquarters,” says Ineke Zeldenrust, international coordinator of the fashion-activist NGO Clean Clothes Campaign in Amsterdam. “They are all women workers.”

Zara was keen to show me how the company is now racing to transform fashion. It’s experimenting with lab-made, zero-carbon materials that imitate silk and cotton and tweaking A.I. algorithms that pinpoint what customers want, so they can eliminate wasteful output. “We’re working so hard on new business models,” Inditex’s head of circularity Germán García Ibáñez said over coffee. He reckons that the industry will be drastically transformed within a decade—perhaps partly thanks to Marta.

But biology only goes so far. Just as relevant is executives’ life experience. Take the Ortegas. Amancio grew up in deep poverty, beginning work at 14 to help feed the family. His daughter, by contrast, is a billionaire heiress schooled in Switzerland and London with a circle of wealthy celeb friends.

And there is another crucial factor too: our own shopping habits. As anxious as we are about global warming and polluted oceans, we nonetheless delight in wandering into Zara stores, bedazzled by the latest clothes, which change twice a week and offer a quick pick-me-up. That business model will remain in place. And until customers truly stop buying vast amounts of fashion, says Deutsche Bank retail analyst Adam Cochrane, “you are playing around the edges.”

Change won’t come easy—even with women like Marta Ortega and Helena Helmersson in power. “I would like to hope it brings a different possibility,” Zeldenrust says. “But at the moment, I see no evidence.”

- Nobel Prize. French writer Annie Ernaux won the Nobel Prize in literature on Thursday, making her the 17th woman to be awarded the prize since its inception in 1901. Ernaux is known for her autobiographical works written from a sharp, clinical perspective and spanning topics like class, abortion, and relationships. New York Times

- Tragedy in Thailand. Thirty-six people, including 24 children, were killed in a mass shooting and stabbing at a childcare center in northeast Thailand on Thursday. The suspect, a 34-year-old former police officer, attacked his stepson’s nursery before returning home and killing his wife, stepson, and himself. CNN

- Airline conduct. A Southwest Airlines pilot is suing the airline, her union, and a former coworker who pleaded guilty in May 2021 to deadbolting the cockpit door and stripping naked in front of her. The pilot, Christine Janning, alleges the airline grounded her in retaliation for reporting her colleague to the company and the FBI and kept him employed despite a history of sexual misconduct allegations. The former colleague’s attorney alleges he only disrobed after Janning encouraged him to, which she denies. Fortune

- Lifting the curtains. Tucker York, who helps run Goldman Sachs’ $7.5 billion consumer and wealth business, and Gary Cohn, who served for a decade as Goldman’s president before leaving for the Trump administration, are allegedly two executives named in a gender discrimination lawsuit against the investment bank. While the names of the accused remain redacted in court documents, people with direct knowledge of Goldman’s internal files have tied the allegations to both men. Bloomberg

- Shoot for the stars. NASA astronaut Nicole Mann became the first Native American woman to fly to space on Wednesday, as part of a four-person team traveling to the International Space Station aboard a SpaceX Crew Dragon vehicle. This is SpaceX’s sixth time sending astronauts to the ISS for NASA since 2020. Wall Street Journal

- Renewed scrutiny. Vice President Kamala Harris was involved in a minor car accident on Monday morning after her vehicle driven by the Secret Service struck a curb hard. Vice President Harris was unharmed but the incident and its reporting raised concerns from Harris and Secret Service director Kim Cheatle over the agency’s habit of concealing mistakes. Washington Post

- Bearing arms. A growing number of Black women have purchased firearms in the last two years, as a means to take safety into their own hands. While white men still represent the largest share of gun owners, one-fifth of all women who purchased firearms in 2020 were Black, according to the National Firearms Survey. Bloomberg

- Closed since Roe. In the 100 days since the Supreme Court overturned Roe v. Wade, 66 of 79 clinics across 15 states have stopped offering abortion care, with the remaining 13 clinics located only in Georgia. While 40 of these clinics continue offering services unrelated to abortion, 26 have shut down entirely. Guttmacher Institute

Nannies open up about the Asian class divide Intelligencer

“There was the assumption that…you’ve got this window and you have to capitalize on it. And when I hear that, it sounds like the root is fear because the assumption is the window is going to close. And I don’t feel comfortable making decisions based on fear.”

-Actor and screenwriter Michaela Coel on deciding to take a break following the success of her limited series I May Destroy You.