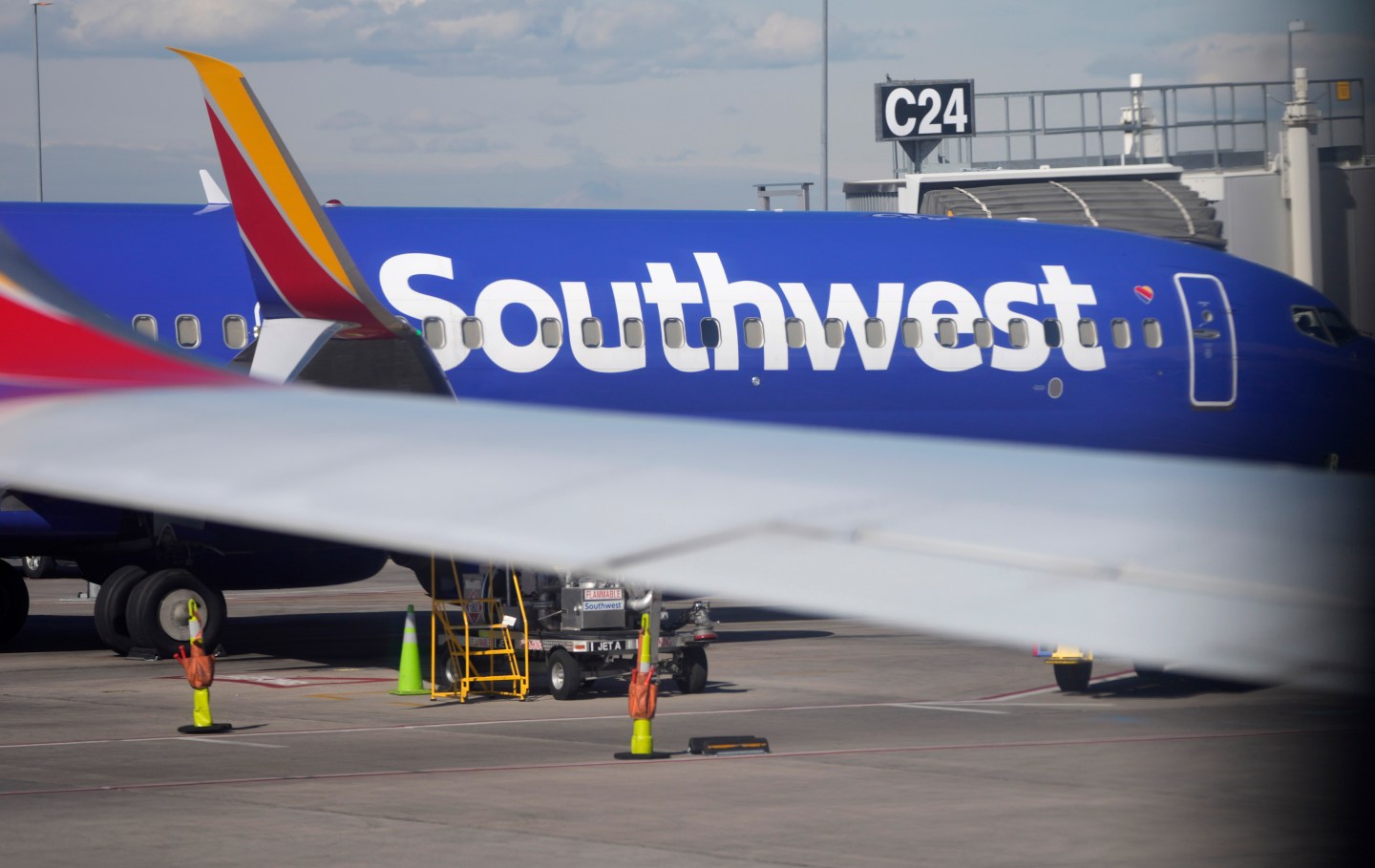 A Southwest Airlines pilot is suing the company, her union and a former colleague who pleaded guilty last year to stripping naked in front of her during a flight, Oct. 5, 2022.
David Zalubowski—AP

A Southwest Airlines pilot is suing the company, her union and a former colleague who pleaded guilty last year to dead-bolting the cockpit door during a flight and stripping naked in front of her.

Christine Janning alleges that Southwest retaliated by grounding her after she reported Michael Haak to the company and the FBI, that it kept him employed despite an alleged history of sexual misconduct and that managers disparaged her in memos.

She also alleges that the Southwest Airlines Pilots Association conspired with the airline and refused to support her. She is suing Haak for sexual assault. He pleaded guilty last year to a federal misdemeanor charge of committing a lewd, indecent or obscene act and was sentenced to probation.

Haak’s attorney, Michael Salnick, said Wednesday that his client disrobed only after Janning encouraged him to, never did anything else and that there were no previous incidents. Southwest said it supported Janning and that it would “vigorously defend” itself against the lawsuit. The union did not respond to a phone call seeking comment.

The Associated Press doesn’t normally identify people who say they are victims of sex crimes, but Janning through her attorney agreed to the use of her name.

According to the lawsuit filed last week in Orange County, Florida, Janning had never met Haak before August 2020, when she was his co-pilot on a flight from Philadelphia to Orlando. She says Haak, a 27-year veteran of the airline, had used his seniority rights the previous day to bump another pilot who had been scheduled to command the flight. Janning believes that’s because he saw a woman was the scheduled co-pilot.

Janning said that when they reached cruising altitude, Haak told her this was his final flight and there was something he wanted to do before retirement.

She said he bolted the door so no flight attendant could enter. He then put the plane on autopilot, stripped off his clothes, began watching pornography on his laptop and committed a lewd act for 30 minutes while taking photos and videos of himself.

Salnick said it was Janning who asked Haak if there was anything he wanted to do before retiring. When he replied he wanted to fly naked, she told him to go ahead and then made sexual advances after he disrobed, Salnick said. He said Haak rejected those and adamantly denied a lewd act occurred.

At his sentencing hearing last year, Haak called the incident “a consensual prank” that got out of hand.

Janning’s attorney, Frank Podesta, denied she encouraged Haak or made any advances.

Janning said in the lawsuit that she was “horrified,” but she kept flying the plane while taking photos “to create a record.” The plane landed safely.

And that wasn’t Haak’s final flight — he flew for three more weeks.

Meanwhile, Janning didn’t report the incident to a Southwest employee relations investigator until three months later. She said she waited because her boss had disparaged her to a male colleague previously. She said she asked the investigator not to inform her boss, but she did.

Janning says she was soon told that because Haak had retired, the airline’s investigation was closed. Janning then went to the FBI, which charged Haak. She alleges Southwest had sent Haak to a Montreal sexual harassment counseling center after a 2008 incident involving a flight attendant.

Salnick says this incident never happened and Haak was never sent to a counseling center.

“This person will do and say whatever is necessary to obtain a financial windfall. I feel sorry for her,” Salnick said.

Janning said as retaliation for the FBI report, she was grounded for more than three months, costing her part of her salary. She was then required to take “unnecessary” flight simulator training before she could work again.

She also said that on the day she was grounded, the airline stranded her in Denver and the FBI had to book her a United Airlines flight so she could return home to Florida. She said a Southwest manager sent a memo to more than 25 employees “that made baseless allegations” about her flying competency.

Southwest denied Janning’s allegations, saying “we immediately supported (Janning) by cooperating with the appropriate outside agencies as they investigated.”

“Our corporate Culture is built upon treating others with mutual respect and dignity, and the events alleged in this situation are inconsistent with the behavior that we require of our Employees,” the statement read.

Janning said that when she contacted the union, its leaders did nothing to help her but did write a letter to Haak’s judge during his misdemeanor case saying he had a “spotless” record.

No hearings have been scheduled.