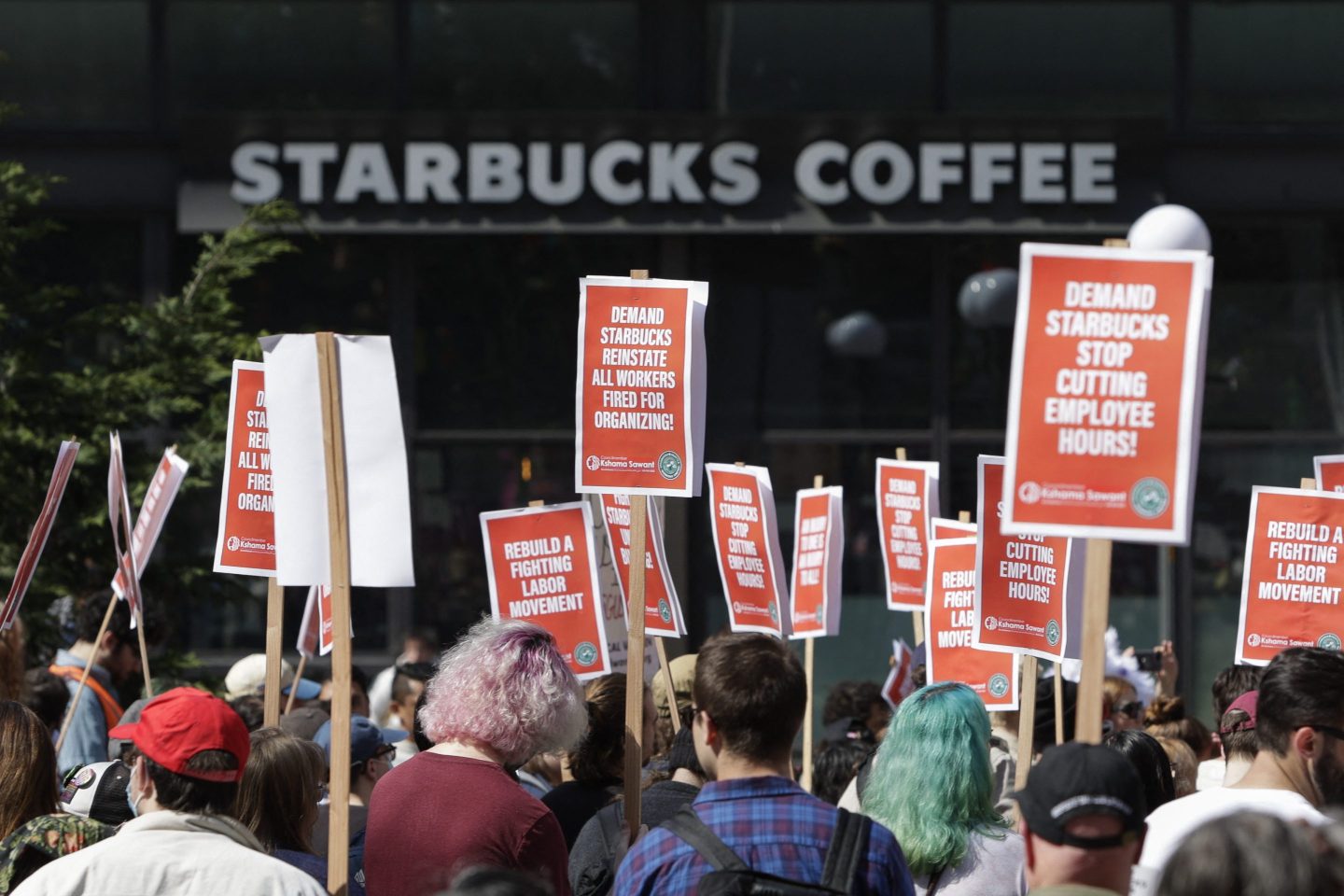 Companies such as Starbucks and Amazon have been facing a growing unionization drive among their employees.
JASON REDMOND - AFP - Getty Images

After years of worrying about external actors—protesters at annual meetings, disruptive competitors, or activist investors—CEOs are increasingly concerned about discontent in their own ranks.

Starbucks confronts a unionization campaign despite being historically heralded for offering generous benefits. Picking a new CEO won’t simply make this go away. Disney, which operates an institute that teaches workers to enhance corporate culture, took heat from its own workforce over its stance on LGBTQIA+ legislation. Volkswagen’s CEO was forced out after he made comments that upset employees and unions.

Employees have been emboldened by dramatic workplace changes. Despite a slightly slowing economy, talent is still scarce, and those on the payroll are demanding more money and work-from-home provisions. Social media has provided a platform, and companies must tread carefully when responding to anything their employees post. Finally, a deterioration in trust in elected leaders has thrust CEOs into the awkward position of having to lead on social issues.

Managing under the microscope of culture warriors and ESG evangelists has clearly rattled senior executives. CEO exits have jumped 29% over 2021. Tenure has dropped to just 4.9 years, and nearly three-quarters of CEOs say they are afraid of losing their jobs.

Amid these shifts, CEOs face decisions familiar to football players: They can play to win, or just play not to lose. Playing to win requires risk-taking, steady communication, and agility. Playing not to lose means crouching into a defensive stance, trying not to rock the boat, and avoiding making the tough calls.

As we head toward potentially hard economic times, too many CEOs are simply playing not to lose. The blame game will not make a CEO’s tough decisions any easier. A rising tide of employees can smell a rat no matter how hard a leader tries to dress it up, and they are increasingly likely to call you out.

How do you play to win? Listen to your workers and explain the facts. Stay focused and impactful instead of trying to please everyone by spreading out or delaying tough decisions.

Executives who say “yes” reflexively will be on shaky ground when accountability is required. Sure, it’s tempting to embrace every passing tenet of ESG and please the crowd. But no CEO should, for a moment, forget that customer requirements need to be met and profit must be earned before companies can make much of a difference in the areas employees say they care about.

Tesla, Amazon, and Apple have always been admirable companies, but it wasn’t until Musk, Bezos, and Jobs started making money that they could seriously influence the marketplace, the environment, or our quality of life.

Leaders who operate from fear risk grooming employees who don’t understand the fundamentals and raison d’être of the businesses that pay their salaries.

It’s easy for brilliant young employees to be heard when they issue well-reasoned complaints about the alleged disparity in compensation between shareholders and hourly workers. But has any ranking company officer sat down and explained to them how many cents out of every dollar of revenue go to the shareholders who own the company? Someone who completely understands business and the process by which money is made may be upset or decide to leave, but they can’t plead ignorance.

CEOs must realize they can’t do this important work on their own. To succeed, they must push HR departments to recruit battle-hardened employees as fervently as they pursue young idealistic talent.

Those who have lived through rough experiences can spot potholes ahead and teach others how to navigate the space between the world we idealize and the one we live in. Going forward, their advice will be crucial for any CEO who is playing to win.

J-S Jacques is a private investor and the former CEO of Rio Tinto.