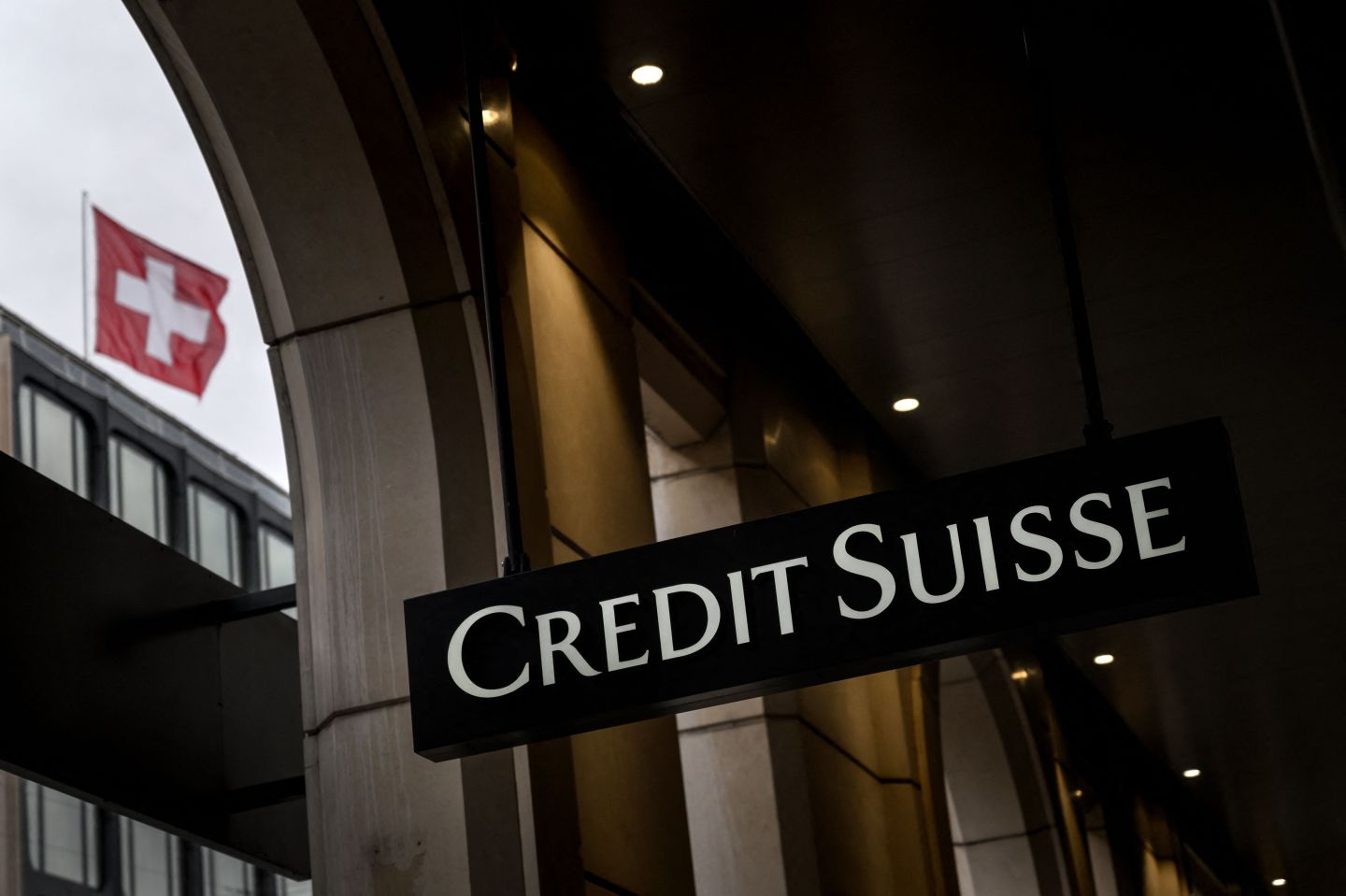 Chief Executive Officer Ulrich Koerner had sought to calm employees and the markets over the weekend only to see his carefully-worded memo have the opposite effect.
FABRICE COFFRINI—AFP via Getty Images

Credit Suisse Group AG’s gauge of credit risk rose to a record high while its stock hit a fresh low, adding to the turmoil after the bank’s attempts to reassure markets on its financial stability backfired.

The five-year credit default swaps price of about 293 basis points is up from about 55 basis points at the start of the year and at the highest ever, according to ICE Data Services. At the same time, the shares dropped as much as 12% in Zurich on Monday and have lost about 60% just this year alone, on track for the biggest annual drop in Credit Suisse’s history.

Chief Executive Officer Ulrich Koerner had sought to calm employees and the markets over the weekend only to see his carefully-worded memo have the opposite effect. While touting the bank’s capital levels and liquidity, he acknowledged that the firm was facing a “critical moment” as it worked towards its latest overhaul.

He also told employees that he will be sending them a regular update until the firm announces the new strategic plan on Oct. 27. At the same time, Credit Suisse again sent around talking points to executives dealing with clients who brought up the credit default swaps, according to people with knowledge of the matter.

While the credit default swap levels are still far from distressed and are part of a broad market selloff, they signify deteriorating perceptions of creditworthiness for the scandal-hit bank in the current environment. There is now a roughly 23% chance the bank defaults on its bonds within 5 years.

Some clients have used the rise in the CDS this year to ask questions, negotiate prices or use competitors, the people said, asking to remain anonymous discussing confidential conversations.

Credit Suisse declined to comment via a company spokesman.

Some prominent figures took to Twitter over the weekend to dismiss some of the rumors prompted by the widened CDS spread as “scaremongering.” Saba Capital Management’s Boaz Weinstein tweeted “take a deep breath” and compared the situation to when Morgan Stanley’s CDS was twice as wide in 2011 and 2012.

Koerner, named CEO in late July, has had to deal with market speculation, banker exits and capital doubts as he seeks to set a path forward. The lender is currently finalizing plans that will likely see sweeping changes to its investment bank and may include cutting thousands of jobs over a number of years, Bloomberg has reported.

Koerner’s memo was the second straight Friday missive as speculation over the beleaguered bank’s future increases. Analysts at KBW estimated that the firm may need to raise 4 billion Swiss francs ($4 billion) of capital even after selling some assets to fund any restructuring, growth efforts and any unknowns.

Credit Suisse’s market capitalization has dropped to around 9.5 billion Swiss francs, meaning any share sale would be highly dilutive to longtime holders. The market value was above 30 billion francs as recently as March 2021.

Bank executives have noted that the firm’s 13.5% CET1 capital ratio at June 30 was in the middle of the planned range of 13% to 14% for 2022. The firm’s 2021 annual report said that its international regulatory minimum ratio was 8%, while Swiss authorities required a higher level of about 10%.

The KBW analysts were the latest to draw comparisons to the crisis of confidence that shook Deutsche Bank AG six years ago. Then, the German lender was facing broad questions about its strategy as well as near-term concerns about the cost of a settlement to end a US probe related to mortgage-backed securities. Deutsche Bank saw its credit-default swaps climb, its debt rating downgraded and some clients step back from working with it.

The stress eased over several months as the German firm settled for a lower figure than many feared, raised about 8 billion euros ($7.8 billion) of new capital and announced a strategy revamp. Still, what the bank called a “vicious circle” of declining revenue and rising funding costs took years to reverse.

There are differences between the two situations. Credit Suisse doesn’t face any one issue on the scale of Deutsche Bank’s $7.2 billion settlement, and its key capital ratio of 13.5% is higher than the 10.8% that the German firm had six years ago.

The stress Deutsche Bank faced in 2016 resulted in the unusual dynamic where the cost of insuring against losses on the lender’s debt for one year surpassed that of protection for five years. Credit Suisse’s one-year swaps are still significantly cheaper than five-year ones.

Last week, Credit Suisse said it’s working on possible asset and business sales as part of its strategic plan which will be unveiled at the end of October. The bank is exploring deals to sell its securitized products trading unit, is weighing the sale of its Latin American wealth management operations excluding Brazil, and is considering reviving the First Boston brand name, Bloomberg has reported.