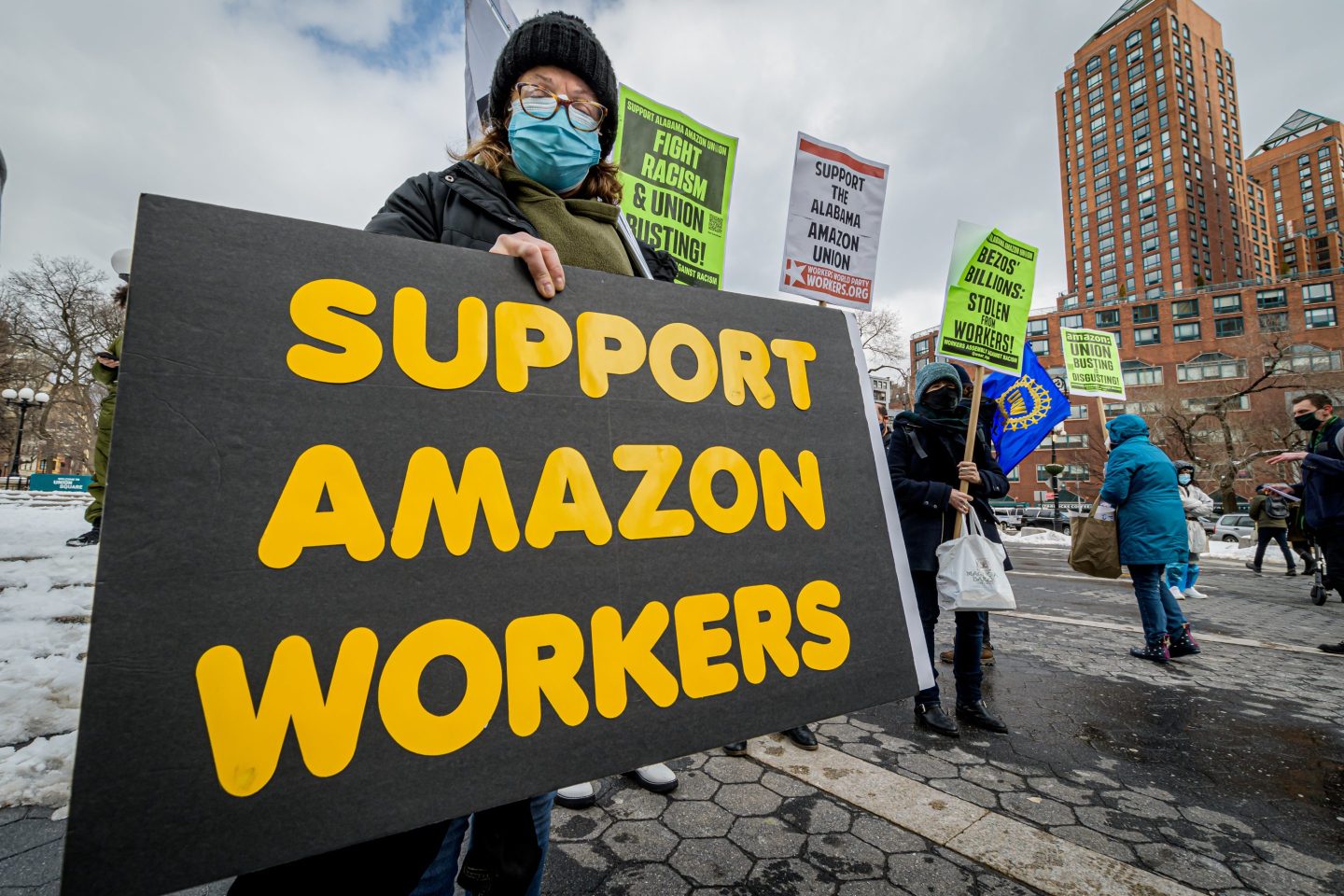 Members of the Workers Assembly Against Racism gathered across from Jeff Bezos-owned Whole Foods Market in Union Square South for a nation-wide solidarity event with the unionizing Amazon workers in Bessemer, Alabama.
Erik McGregor—LightRocket/Getty Images

Amazon is trying to slim down the number of people coming into its offices by encouraging its call center employees to work from home.  `

The e-commerce giant is offering full remote work to its customer service workers and is planning to shut down multiple call centers around the country to save money on real estate, Bloomberg reported.

After the pandemic proved that many office jobs can be done remotely, companies like Amazon have concluded that most customer service roles—which fill up precious office space—do not need to happen in person. Customer service positions also experience quick turnover, and Amazon’s remote working scheme could help it recruit more employees across different cities in the U.S.

“We’re offering additional members of our Customer Service team the increased flexibility that comes with working virtually,” said Amazon spokesperson Brad Glasser. “We’re working with employees to make sure their transition is seamless while continuing to prioritize best-in-class support for customers.”

The move to cut in-person call center offices coincides with other plans within Amazon to trim real estate holdings it bought up during the pandemic-era surge in online shopping. Amazon is looking to lease 10 million square feet of space and vacate even more by ending leases with landlords, according to Bloomberg, in warehouses in New York, New Jersey, Southern California, and Atlanta.

There is a greater shift happening within Amazon away from the no-frills, low-wage, high-turnover labor model it has operated under for years.

In June, a leaked Amazon internal research memo published by Recode found that the tech giant could run out of workers to hire for its warehouses by 2024. The company also announced today that it would be increasing its hourly pay in the U.S. for most frontline employees in warehousing and transportation to more than $19 an hour.

Amazon has also already allowed remote work for its corporate employees. “We don’t have a plan to require people to come back,” CEO Andy Jassy told tech journalist Kara Swisher at Vox Media’s 2022 Code Conference, adding, “We don’t right now. But we’re going to proceed adaptively as we learn.”

One reason that Amazon may be more inclined to give concessions to its employees is that it is facing increasing employee activism and union drives across its warehouses in the U.S.

Amazon recently lost its attempt to overturn a historic union election held last April, where workers at a Staten Island, N.Y., warehouse voted to unionize—making the 8,000-employee Amazon facility the first to do so. Another union vote is scheduled at a facility in Albany, N.Y., next month.

Amazon is the second-largest private employer in the U.S., behind Walmart, and the company employed more than 1.1 million people in the U.S. at the end of 2021. While call center employees make up a small fraction of its workforce, it is another indication of a power shift toward the worker.