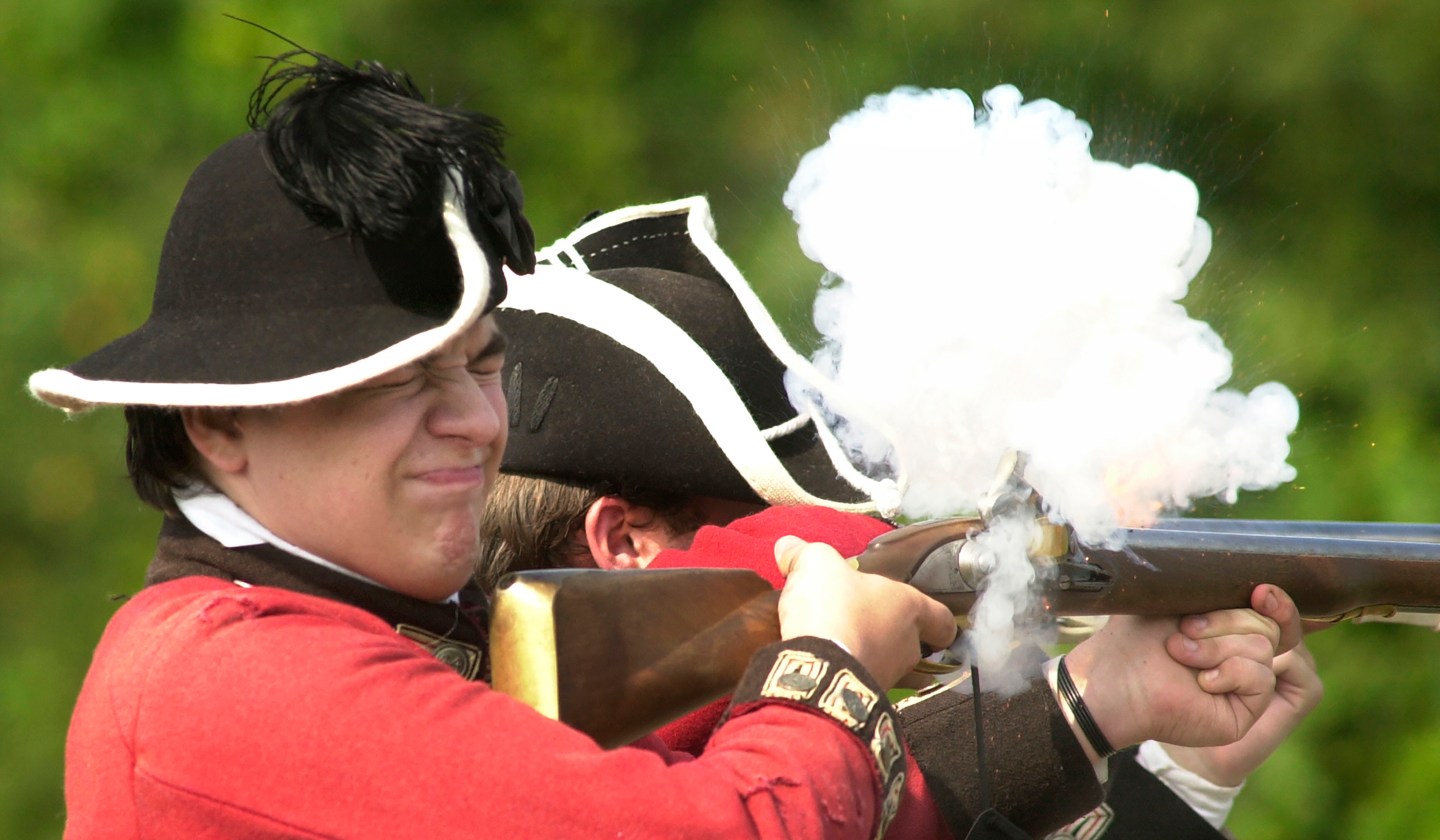 Private soldier Chance Jones of Manhattan, and a first-time Revolutionary War re-enactor, squints as he fires 90-grain black powder at advancing American re-enactors during the 225th anniversary reenactment of the Battle of Newtown, Aug. 28, 2004, in Lowman, N.Y.
Wayne Hansen/Press & Sun-Bulletin via AP, File

ALBANY, N.Y. (AP) — Some historical battle re-enactors in New York are holding their musket fire because of worries over the state’s new gun rules — an unplanned side effect of a law designed to protect the public’s safety.

The law that went into effect this month declares parks, government property and a long list of other “sensitive” places off limits to guns. The rules were geared more for semiautomatic pistols than flintlock weapons, but re-enactors who fear being arrested if they publicly re-stage battles from the colonial era to the Civil War are staying off the field.

Gov. Kathy Hochul’s administration insists that historical battle re-enactments are still OK, and some have still taken place this month. But persistent skepticism among event organizers and participants has resulted in some cancellations, like an 18th century encampment and battle re-enactment planned for last weekend north of Saratoga Springs.

“We’ve been getting reports from units that were supposed to attend that they don’t feel comfortable transporting muskets or bringing muskets to the site,” said Harold Nicholson, a re-enactor involved in the event at Rogers Island. “And so at that point, we decided that it was probably best not to (go ahead).”

The consternation stems from a law quickly approved after the U.S. Supreme Court invalidated New York’s requirement that people must demonstrate an unusual threat to their safety to qualify for a license to carry a handgun outside their homes.

Hochul and her fellow Democrats in control of the state Legislature responded with a law that set strict new licensing criteria and limited where handguns, shotguns and rifles can be carried. Some re-enactors looking at the letter of the law have concluded the old-style weapons they use could place them in the crosshairs of the new rules.

Among the cancelled events: two Civil War re-enactments in upstate New York this month and a Revolutionary War raid that was to be staged this weekend at the Fort Klock historic site in the Mohawk Valley.

“The reason why we canceled it was for fear of exposing the people that we invited to the event to prosecution for committing a felony,” said Robert Metzger, a re-enactor who chairs the board of Fort Klock Historic Restoration.

Metzger said he realizes local sheriff’s deputies have “a lot better things to do than to harass 70-year-old men with flintlocks,” but there was a chance someone could complain. And the not-for-profit group did not want to take the chance of losing its state charter.

He added that re-enactors from Canada were reluctant to come down for the event.

Hochul’s press office, in a prepared statement, said historical re-enactments can continue under the law “and there should be no concern otherwise.”

“We will work with legislators and local law enforcement to ensure these events can proceed as they have for centuries,” the administration said. “In the meantime, individuals who have lawfully participated in reenactments should continue to do so.”

Organizers of a re-enactment at Fort Ticonderoga in northern New York took that advice, hosting a recreation of a 1777 raid on the fort.

“Both the governor’s office and state leadership advised us to just continue operations as usual,” said Beth Hill, president and CEO of the Fort Ticonderoga Association. “So we haven’t changed anything.”

But the governor’s repeated assurances have meant less to other groups. They say they will not feel secure on simulated battlefields in New York until there are changes in the law making it clear they won’t become defendants if they act like historical soldiers.

“We want our history to live,” Metzger said. “And they’re making it quite difficult.”