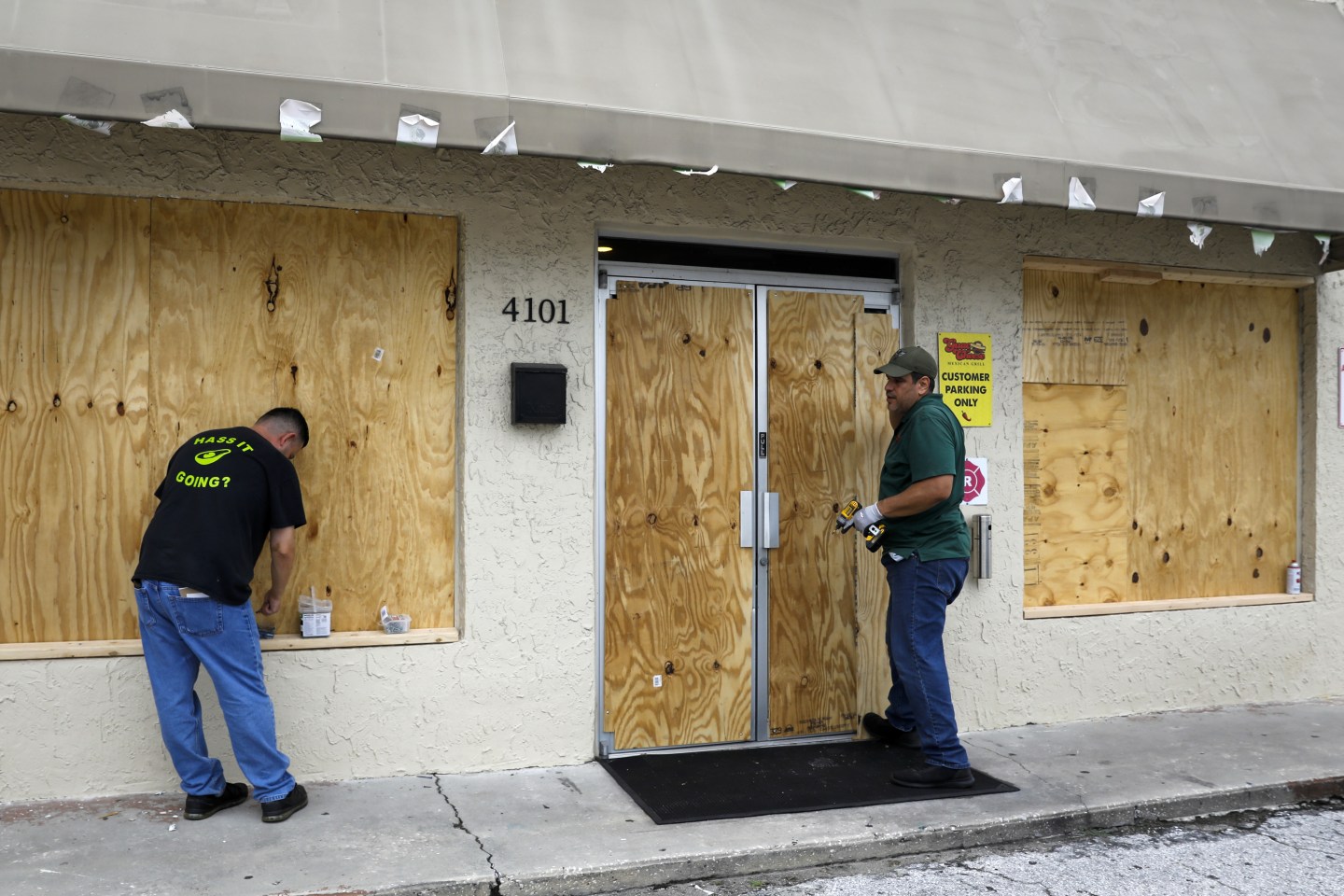 Workers board up a restaurant ahead of Hurricane Ian in Tampa, Florida, US, on Tuesday, Sept. 27, 2022. Ian made landfall over western Cuba as a major Category 3 hurricane, while churning toward Florida in what could be the worst storm to hit Tampa in over a century.
va Marie Uzcategui/Bloomberg for Getty Images

After striking Cuba on Tuesday with winds up to 125 miles per hour, Hurricane Ian is now a Category 4 storm as it approaches Florida’s west coast. Hurricane damage can be devastating and costly. But when it comes to corporations, research also links hurricane damage to a loss in market value.

Companies that reported hurricane-related financial damage to the U.S. Securities and Exchange Commission in their 10-K annual statements on average see their stocks fall 5% over and above the market in the following year, Deborah Pretty, founder of the risk analytics advisory firm Pentland Analytics, told me. This is based on research conducted by Pretty, on behalf of FM Global, and released in 2019, which Fortune reported on.

“Yes, I believe we are seeing an enduring change in the way markets react to companies experiencing climate-related loss and damage,” Pretty told me. “The research results were consistent across a large portfolio of companies, suggesting a systematic response by markets to disaster-struck companies. The results were very consistent also with a five-year global study of flood damage, suggesting that the impact on shareholder value from natural disasters is not special to hurricane damage.”

Pretty was commissioned by FM Global, a commercial mutual insurance and risk consulting company, to conduct research that expanded on the firm’s white paper, “Master the Disaster: Why CFOs Must Initiate Natural Catastrophe Preparedness in 2019 and Beyond.” FM Global identified big public companies that reported financial damage from the storm trio of Harvey, Irma, and Maria in their annual 10-K filings. In her research, Pretty used S&P 500 data to adjust for market forces including stock splits and dividends to isolate the impact on stock prices to get the specific impact on market capitalization. She then analyzed 52 U.S.-based large public companies. The companies collectively experienced a $18 billion loss of shareholder value for an average per-corporation loss of $346.2 million.

I asked Pretty how organizations can mitigate the effects of storm damage to their stock prices. “The evidence suggests that well-prepared companies do not just preserve their value but they add to their value,” she explains. “When disaster strikes, additional information about a company (and its management) becomes available to the market. Investors use this new information to reassess their expectations of future cash flow. When investors see what steps a company has taken to prevent loss and mitigate damage, expectations of future performance rise, as does the valuation.”

She continues, “The opposite is also true. When a company is shown to be unprepared for loss, investors de-rate their view of management and their ability to generate future cash flow, and the share price falls.”

When it comes to natural disasters, “it used to be the case that a market impact was only clear for those financial institutions who suffered a direct financial impact,” Pretty says. “For example, banks whose loan portfolios deteriorated and reinsurers who bore the brunt of the losses. Natural disasters were considered simply ‘bad luck’ for non-financial corporations.”

Pretty continues, “However, failure to prepare for natural disasters is now considered bad management. Investors are holding management of non-financial corporations accountable for what actions they took to protect the value of their assets against damage from climate-related events such as hurricanes and floods. Measures exist to prevent loss and mitigate damage, so if managers choose not to invest in them, the owners of companies (the investors) want to know why.”

What are some best practices in property protection to prepare for a hurricane? “To help minimize the effects of costly wind damage, organizations should have backup power generators ready, rooftops inspected and secured, doors braced, windows covered, and vulnerable objects put away or strapped down, including rooftop equipment and solar panels,” Pretty says.

As the current macroeconomic environment continues, many CFOs have stretched budgets. I asked Pretty if there are cost-effective ways of addressing natural disasters.

“Budgets are indeed under pressure, but the most cost-effective approach is for companies to focus on the long-term and recognize that prevention is better than a cure,” she says. “The cost of controls put in place to prevent loss or damage tend to be dwarfed by the cost to a business in damaged reputation, lost market share, and a strategic plan derailed by substantial loss. The evidence demonstrates that investing in physical resilience is value-adding in the long-term.”

As the battle for talent continues, Bank of America's annual "Workplace Benefits Report," finds financial wellness offerings are key. The report, released on Sept. 27, found that 84% of employers surveyed said offering financial wellness tools can help reduce employee attrition, 81% said wellness tools help attract higher-quality employees, and 91% said there's higher employee satisfaction when offering resources to manage overall wellbeing. Over the past year, almost half (46%) of employers have seen an increase in resignations. And, one in three employees have switched jobs or thought about switching jobs, according to the report. Bank of America found that 62% of employees experience stress over their finances, and 97% of employers feel responsible for employee financial wellness. The findings are based on a nationwide survey of 824 employees and 846 employers conducted in February, and an additional survey of 478 employees conducted in July.

"Housing prices plunge in 77% of U.S. metro areas: ‘The turn has finally happened,'" a new Fortune report, found that in August, no fewer than 45 or 77% of the 58 metros, for which the American Enterprise Institute (AEI) had monthly, data went negative. "This is the beginning of a trend that should send prices down between 8% and 10% by next August," AEI's Housing Center Director Ed Pinto said.

John R. Tyson was named CFO at Tyson Foods, Inc. (NYSE: TSN), effective Oct. 2. Tyson is the son of board chairman John H. Tyson and the great-grandson of Tyson founder John W. Tyson. He currently serves as the company's EVP of strategy and chief sustainability officer. Tyson will continue to lead enterprise strategy and sustainability activities. Before joining the company in 2019, he held various roles in investment banking, private equity, and venture capital, including at J.P. Morgan. Tyson succeeds Stewart Glendinning, who will transition from his current role as EVP and CFO at Tyson to take on the position of group president of prepared foods. Glendinning joined Tyson Foods in 2017 from Molson Coors Brewing Company where he served as President & CEO, International.

Philippe Gautier was named CFO and COO at Waldencast PLC, (Nasdaq: WALD), a global multi-brand beauty and wellness platform, effective Oct. 19. Gautier has a 30-year career leading finance and operations. Most recently, he served as group CFO at Selecta. Before that, Gautier spent five years as group CFO and operations for SMCP (Sandro, Maje, Claudie Pierlot, De Fursac). In addition, for over a decade, Gautier served as CFO of brands at Kering, including Sergio Rossi and Puma, working in Italy and in the U.S. Gautier began his career at HSBC asset management in Tokyo.

“Well, I am a little nervous about exactly that.”

—Chicago Federal Reserve President Charles Evans said on CNBC’s "Squawk Box Europe" on Tuesday regarding investor fears about the Fed's series of aggressive interest rate hikes without waiting long enough to assess the impact. “There are lags in monetary policy and we have moved expeditiously," Evans told CNBC. "We have done three 75 basis point increases in a row and there is a talk of more to get to that 4.25% to 4.5% by the end of the year, you’re not leaving much time to sort of look at each monthly release."