Giorgia Meloni says she wants to ‘protect’ Italian women. Some are skeptical 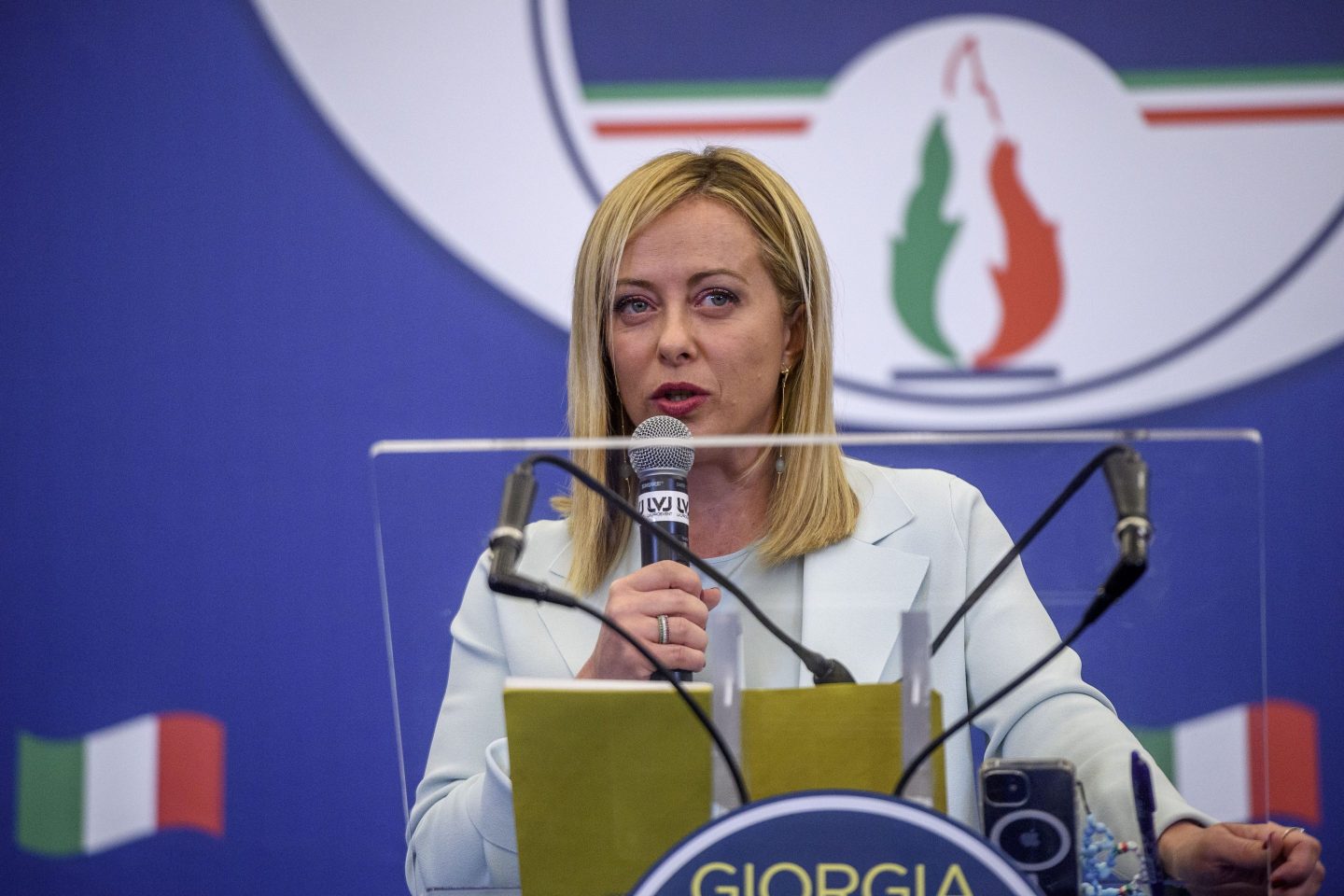 – Rome’s new direction. In the lead-up to Italy’s general election over the weekend, Giorgia Meloni, the 45-year-old head of the far-right Brothers of Italy party, tried to deflect attention from her neofascist roots. “Fascism has been consigned to history,” she told foreign press in an August video message.

Meloni, who is now poised to become Italy’s first female prime minister after her coalition party won a majority in parliament on Sunday, likewise tried to convince women that she isn’t “a monster,” says Giorgia Serughetti, a professor of political philosophy at the University of Milan-Bicocca. “She promised not to touch women’s rights.”

Though Meloni’s apparent ascent to power is unprecedented in a country where politics have been dominated by men, feminists in the country are hardly celebrating it as a win for women.

Meloni may be smashing a glass ceiling, but she opposes gender quotas, abortion, and LGBTQ+ rights. “Yes to natural families, no to the LGBT lobby. Yes to sexual identity, no to gender ideology,” she said in a speech to supporters of Spain’s populist Vox party in June. She’s also against “pink quotas,” whether in government or in boardrooms, stating that she believes in merit-based rather than gender-based advancement.

I spoke to two experts on Monday to gauge how Meloni’s win is perceived in Italy and beyond. By and large, they told me that Meloni’s proposed policies reveal she is in fact an extreme far-right politician, and her public commitment to safeguarding women’s rights appears to be deceptive. “Her whole agenda has been about protecting women,” Serughetti says. But she believes Meloni is instead protecting women’s ability to fulfill their traditional role as mothers. What she offers, says Serughetti, is “more protection, less freedom.”

With Meloni in power, many fear that women’s progress in Italy will stall. Experts point to recent discrepancies between Meloni’s promises to women and her party’s actions in a region it already leads.

Yet Meloni won support among a sizable percentage of Italian women, in part, because she effectively capitalized on a universal fear that they’ve been left behind, Serughetti says. And in many ways they have been. Italian women disproportionately shouldered the pandemic’s economic setback and have yet to regain their financial footing in its aftermath. Finding affordable childcare is another challenge that keeps Italian women out of the workplace and from achieving financial independence. At least 40% of women don’t work outside the home.

But Nadia Urbinati, a professor of political theory at Columbia University, argues that Meloni’s interest in supporting women is limited to mothers. “On one hand, this is good because if you have a job and you are a mother, you should have rights.” But ultimately, she says, the conservative Meloni is far more concerned with “supporting women at maternity and—if needed—at work.”

Although first-trimester abortions have been legal in Italy since 1978, the incoming prime minister is expected to make access to abortion more difficult. Meloni, who has ties to the pro-life movement, has said she will not reverse the country’s abortion law but that she will strengthen policies that give women alternatives. Many view this as a sign that Meloni will make policy changes that would dramatically limit abortion access, says Serughetti.

Many of Meloni’s policies on motherhood cater to women in heterosexual relationships. Though the politician has never come out against gay relationships, Serughetti notes, she is unquestionably against same-sex marriage. Under Meloni’s proposals, only the biological parent of a same-sex couple would be recognized as the child’s parent.

Meloni’s rallying cry has largely centered on patriotism and pushback against Italy’s reliance on foreign workers as its birth rate collapses. While Urbinati says that leaders of other parties in her coalition are more overtly xenophobic and anti-Islamist, Meloni’s repulsion policies are disguised by “a discourse that holds together immigration, maternity, and reproductive policies.”

“When Meloni talks about protecting women, what she really intends is to protect Italian and white women, with no attention to the particular fragility and vulnerability of migrant women,” Serughetti adds.

With 26% of the election votes, Meloni certainly has admirers. But Serughetti believes her victory is partly a product of timing. Meloni ran during a snap election and dominated a condensed campaign period that fell in the summer when most Italians were vacationing. It was difficult to mount counter-protests, and the election saw record-low voter turnout. It didn’t help that the incumbent party was in shambles.

Still, Meloni’s win could usher in another politically transformative and socially conscious era in Italy. “I expect a season of mobilization,” Serughetti says. “I expect families to take to the streets.”

- Trimming the fat. Instacart, led by CEO Fidji Simo, is cutting staff in an effort to convince investors it can maintain growth during an economic downturn. Some of its 3,000 workers have been let go over the last two months as the company prepares for an IPO. Information

- Costly and ineffective. Egg freezing has become a popular option for women who want to delay parenthood, but the costly procedure may not actually be effective. Only 39% of patients who have used frozen eggs actually had a baby, according to research from NYU’s Grossman School of Medicine and Langone Fertility Center. Fortune

- Retirement plans. In 25 years’ time, the Bill & Melinda Gates Foundation will be no more. Speaking at a conference last week, Bill Gates said the foundation plans to wind down by the time he and Melinda are 91 and 83, respectively. Until then, the foundation will focus on eradicating infectious diseases. Forbes

- Book ban. Girls in STEM have become the next victim in the conservative effort to ban over 1,500 books in schools across the country. A Pennsylvania school district banned the nonprofit Girls Who Code book series, whose stories depict girls who befriend each other through their school’s coding club. Guardian

- Exceeded expectations. After setting moderate ticket and partnership goals for its first season, women’s soccer team Angel City FC has surpassed each by a large margin. The team, whose A-list cofounders include Natalie Portman and Reddit founder Alexis Ohanian, has sold nearly 16,000 season tickets this year, instead of the 5,000 it originally aimed for, and $11 million in corporate sponsorships, compared to the $3.25 million it shot for originally. Wall Street Journal

- Going gray. Some women are embracing growing out their gray hair after months without access to hair salons during the pandemic. While workplace bias against aging women isn’t going away, and some women have ultimately decided to dye their hair again, many say they'd rather not spend time and money hiding their grays. Wall Street Journal

- BNPL for the big day. “Buy now, pay later” has entered the wedding market. Instead of using traditional methods like loans or credit cards to finance a wedding, the BNPL platform Maroo allows couples to finance their special day by paying its network of vendors over a 12-month period. New York Times

The abortion crisis manager The Cut

“I struggled with this idea that I had chosen my own health over being able to bear children. But really it wasn’t a choice at all.”

-Actor and director Lena Dunham on having a hysterectomy to alleviate chronic pain from endometriosis.