It’s the worst ever collapse of the pound but far from the first. Here’s a look back at the biggest sterling shocks, all the way back to 1971. 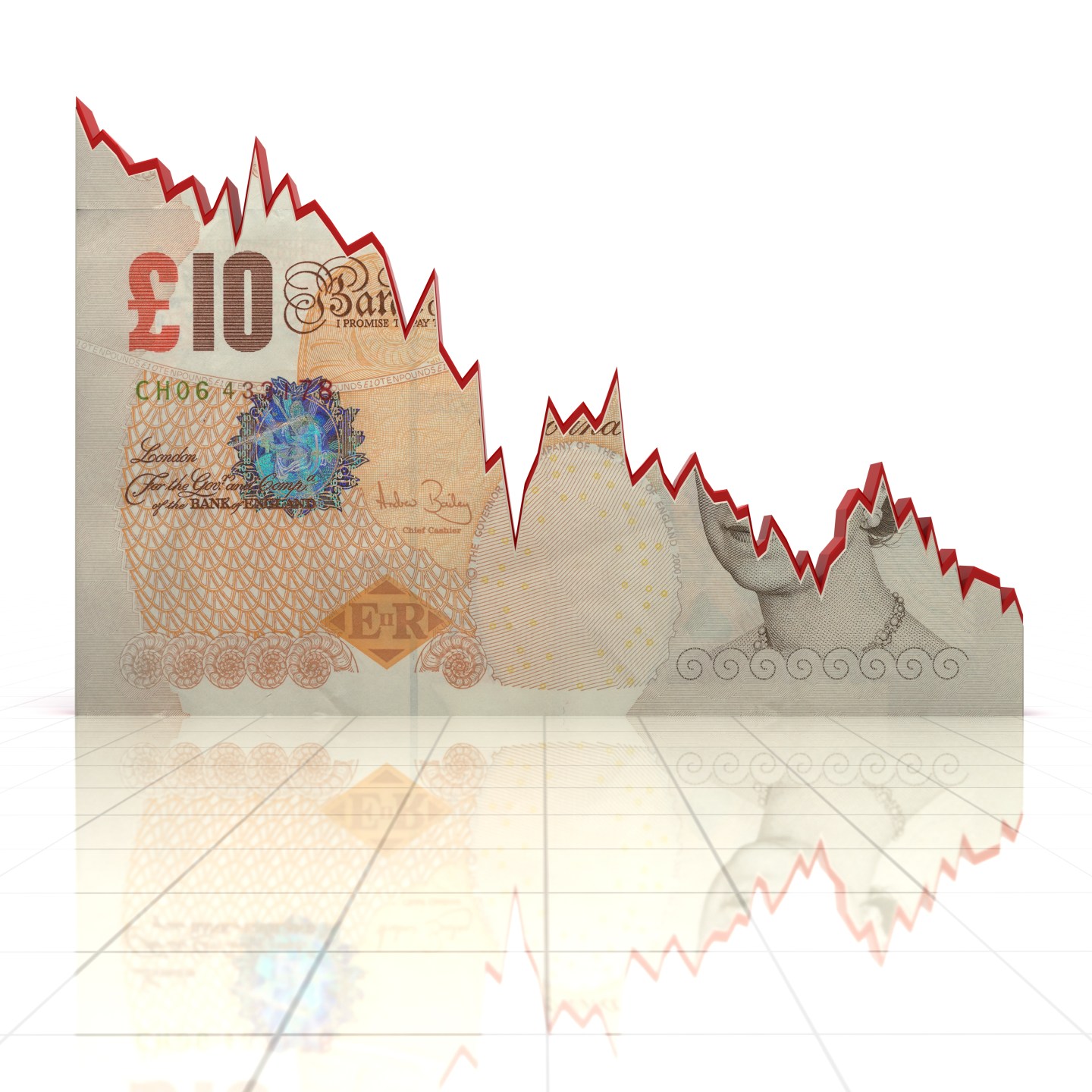 The pound is falling now, but it has before.
Getty Images

Since the pound sterling first went into free float in 1971, no event has sent Britain’s currency lower than the mini-budget announcement by the new chancellor of the exchequer Kwasi Kwarteng on Friday.

The pound fell 5% to an all-time low of $1.03 on Monday morning, as financial markets extended a selloff of U.K. assets following the new tax cuts unveiled by the U.K.’s recently appointed finance minister. The tax cuts are a part of new Prime Minister Liz Truss’ bold new spending plans to drag the economy out of a recession as she pursues a growth rate of 2.5% in the medium term—while borrowing £45 billion ($49 billion) to do so.

After it was reported over the weekend that Kwarteng was considering more beneficial tax cuts for high earners—which Kwarteng partially confirmed—investors seem afraid that the U.K. budget will raise the country’s debt to unsustainable levels against the backdrop of a looming recession while also worsening inflation during a cost-of-living crisis and hurting Britain’s credibility to boot.

The pound moderately recovered to $1.07 on Monday with markets largely expecting an emergency rate hike from the Bank of England to calm the turmoil.

Since 1971, the U.K. has gone through five recessions, joined and left the European Exchange Rate Mechanism, suffered through the 2008 financial crisis, Brexit, and COVID-19, and yet nothing compares to this reaction to a speech on tax policy.

Here’s a look at other swings in the U.K. currency and how they differ from today.

Under familiar circumstances to today’s pound collapse, the U.K. saw its currency drop to record low levels of $1.40 in 1976.

After Anthony Barber, the U.K. finance minister from 1970 to 1974, unveiled a “spend for growth” budget plan, the country went through a brief period of economic growth called the “Barber boom” but then ran into a wage-price spiral and super-high inflation of around 27%, culminating with a deep collapse of the currency.

Mohamed El-Erian, an adviser at Allianz, alluded to this period in a note following Kwarteng’s announcement. “This is 1972, in the sense of the government going for growth and doing it via an unfunded stimulus,” he wrote, adding that Kwarteng’s measures amount to “more deregulation, more tax cuts, go for growth and let the central bank deal with the inflation problem.”

To correct the rising cost of living and to pay off the debt the government had borrowed at the start of the decade, James Callaghan, the Labour government leader who took the reigns in 1976, ended up borrowing $3.9 billion from the International Monetary Fund—the largest loan ever requested from the IMF—to maintain the value of the sterling.

The last time the pound sterling fell as low as $1.03 was in 1985, three years into the early ’80s recession brought on by the 1979 energy crisis and rising inflation.

At the time, Margaret Thatcher had been in office since 1979 and similarly to Truss and Kwarteng had brought in a sweeping number of tax cuts to incentivize growth. Thatcher and her Conservative government cut the top income tax rate from 83% to 60% and the basic rate income tax from 33% to 30%.

But economists note the similarities between Kwarteng and Thatcher’s growth plan end there. To pay for the tax cut, Thatcher’s government raised the value-added tax rate from 8% to 15% in the 1979 Budget to offset the income tax reductions and make sure they were not inflationary. It also raised the national insurance employee rate from 6% to 9% by 1983, in sharp contrast with measures announced on Friday.

While the pound fell to $1.03 valuation, this had less to do with the value of the pound but rather how strong the U.S. dollar was at the time.

On Sep. 16, 1992, the sterling collapsed and Britain was forced to withdraw from the European Exchange Rate Mechanism (ERM)—an adjustable exchange rate that linked the value of the European currencies together. The U.K. had been in the European ERM since 1990 but was forced out in less than two years as it fell out of the lower limits set by the ERM.

Part of its downfall could be attributed to billionaire investor George Soros, who believed the U.K. government would fail at its attempt to prop up the pound and accumulated a large short position on the currency. As he started to advocate for a weakening pound, other investors also began betting against the pound, which eventually led to the Black Wednesday crash.

George Soros reportedly made $1 billion in profit on this day and became known for “breaking the Bank of England.”

On Black Wednesday, the government raised interest rates twice on the same day to quell the panic in the market, which Alain Naef, an economist and lecturer at Science Po and author of An Exchange Rate History of the United Kingdom, said had the opposite effect and panicked markets even more.

“I think the Bank of England is trying to weigh right now is whether they want to do an emergency meeting and raise rates or if they’d rather come across as calm and composed and not do that,” Naef told Fortune. “It’s sort of like do something you lose and you don’t do something you lose. They’re in a very tight spot.”

The pound dropped significantly in 2008 after Labour Prime Minister Gordon Brown told the U.K. the global credit crisis was likely to push Britain into a recession. On Oct. 22, 2008, the sterling fell by 4% to a value of $1.62

But sometimes a weakening currency through a recession can be good for a country, according to Nangle. “In textbooks, a weakening currency has the effect of making an economy’s exports cheaper and its imports more expensive, boosting the former and suppressing the latter,” Nangle writes, arguing a weaker pound could make a currency more competitive. “However, there are few signs that this textbook model applies to the UK,” Nangle writes.

He notes that in the first half of 2007, the country’s current account, or net income from trade and overseas investment, was in a deficit of around 3% of the country’s gross domestic product due to the pound’s poor valuation against the euro and the dollar. “This has increased the cost of imports — hurting real incomes and consumption — but exports have proven to be demand elastic rather than price elastic.”

Things may look worse this time around as independent research consultancy Pantheon Macroeconomics forecasts the current account to be in a deficit to be around 8% of GDP in 2022 and 2023.

The biggest one-day loss in the pound sterling’s history came after the U.K. voted to leave the European Union. The currency tumbled as much as 13% to $1.33 as investors took fright at Britain’s shock decision to leave the single market.

This has had long-standing effects on the pound sterling.  A report published in June 2021 by the Bank of England estimated that the U.K.’s decision to leave the EU increased uncertainty and lowered the level of investment by almost 25% in 2020 and 2021.

“The fact that the pound has never been able to recover to the levels traded against the euro before the Brexit referendum corresponds to the weakness of investment in this period,” Jane Foley, head of foreign exchange strategy at Rabobank, wrote in an Oped in August.

But while the U.K. leaving the European Union and Kwasi Kwarteng’s mini-budget announcement create short-term hits to the country’s currency value, they are set against a much larger and long-term backdrop: the fall of the British empire.

“The pound is declining because we started with the Empire. In the ’50s you had a lot of territories and a lot of GDP and then now we’re moving towards the U.K,” Naef tells Fortune, noting that the U.K’s currency to the lowest its been since the dollar was created in 1792. “If the economy under territories are shrinking, well the currency is going shrink with that”

“It is a question of economic might,” Naef tells Fortune.