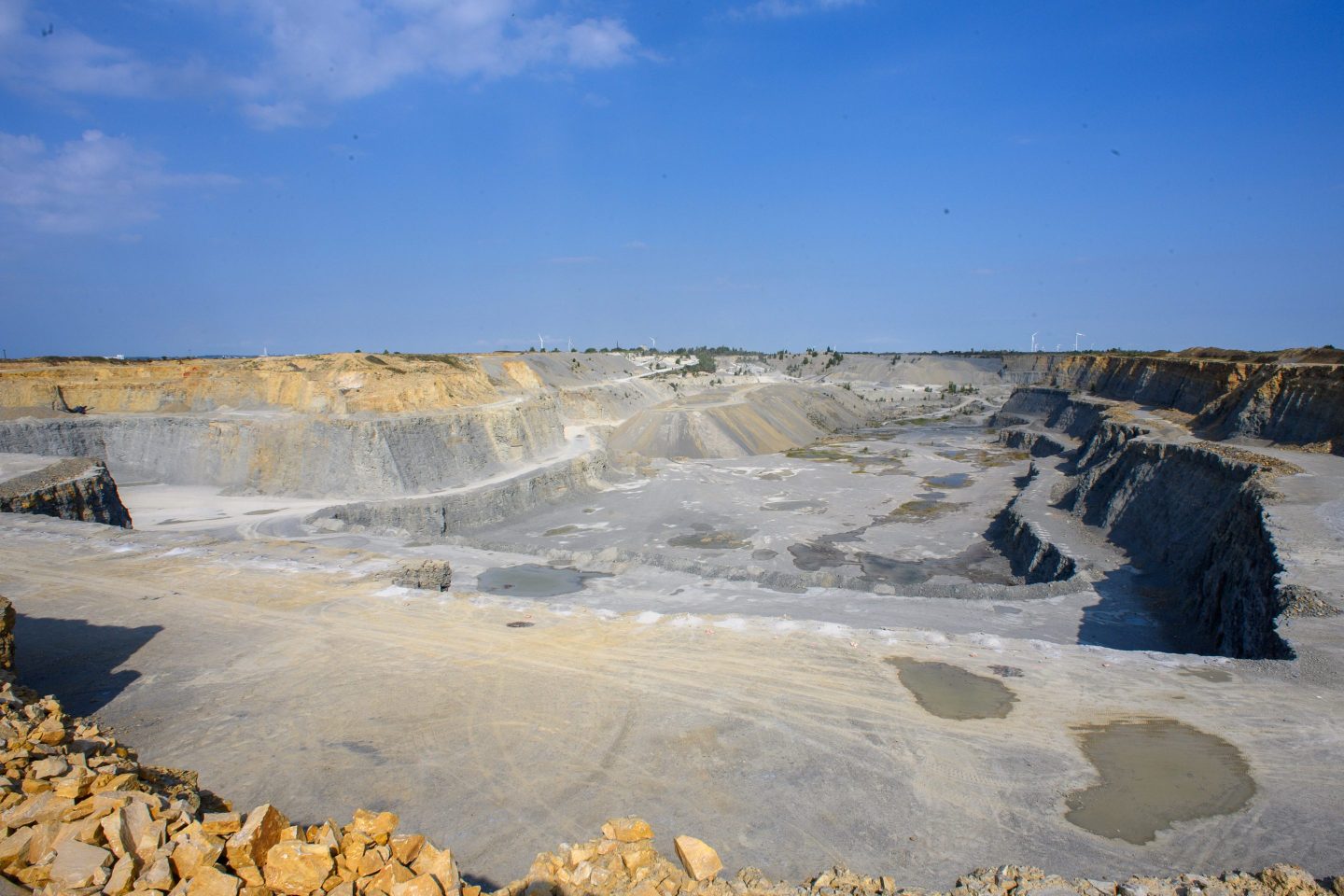 In 2021, Shopify’s Sustainability Fund purchased 400 tons of stored carbon from Heirloom, a company in the process of testing and fine-tuning technology to speed up a natural process called carbon mineralization. During that process, carbon dioxide in the atmosphere binds to minerals and permanently turns to stone; Heirloom’s goal is to make it happen within days instead of years.

“Since our purchase, they’ve dramatically improved the rate that they’re able to demonstrate carbon capture using limestone, and that enabled them to unlock their latest Series A funding round, where they managed to pull together $53 million,” explained Stacy Kauk, Shopify’s head of sustainability.

Now Heirloom is poised to scale up its innovative carbon capture solution further, since the recent progress means it can qualify to sell its carbon credits to Frontier, an advanced market commitment (AMC) that is putting close to $1 billion into accelerating the development and growth of technology-based solutions to draw down, or remove, carbon at an unprecedented scale.

AMCs are funding mechanisms that have been used to incentivize vaccine development in cases where a lucrative market for the lifesaving product did not already—and might not ever—exist. In the case of carbon capture, a similar market gap exists, and the Frontier AMC essentially promises that there will be buyers waiting once companies advance their technology and scale up.

It has the potential to develop a market for carbon removal, a practice that climate scientists say will be necessary to fight climate change.

Frontier was launched by a group of mostly tech companies this spring: Alongside Shopify, there is Stripe, Alphabet, Meta and McKinsey. Each company has been active on climate issues and Frontier creates a way to bring one aspect of their initiatives together.

“With Frontier, we want to send a loud demand signal to entrepreneurs, researchers, and investors that there is a market for permanent carbon removal: build and we will buy,” said Stripe’s Head of Climate Nan Ransohoff, who is at the forefront of the initiative, in an April press release.

Like Shopify, Stripe was already investing in carbon removal via Stripe Climate, but the technologies are incredibly expensive.  By pooling their resources together and continuing to bring in new players, the companies hope to more meaningfully move the needle on climate change while offsetting their own emissions.

The need for carbon removal

Top climate scientists agree that a rapid global shift away from fossil fuels to renewable energy is the most critical step to prevent catastrophic climate outcomes. Yet, because of the amount of greenhouse gases that have already been released into the atmosphere, that shift alone won’t be enough without also removing existing carbon dioxide from the atmosphere. In the latest assessment from the Intergovernmental Panel on Climate Change (IPCC), experts called carbon dioxide removal “an essential element of scenarios that limit warming to 1.5° C or likely below 2° C by 2100.”

“Carbon removal is not a replacement for deep decarbonization,” said Peter Minor, director of science and innovation at Carbon 180, a nonprofit advocacy group for carbon removal technology. “But there isn’t a world where we can have the life that we enjoy living without also actually developing this removal technology, and at massive scale.”

Nature-based sequestration projects such as forest preservation are one way to remove carbon from the atmosphere, but they are imperfect. Critics have noted that some companies use these projects as a way to offset carbon emissions rather than mitigate their carbon footprint. Offsets also often have a limited impact: On a recent episode of Last Week Tonight, John Oliver identified forests that had been counted as offsets even though they were never under threat. In California, wildfires are destroying thousands of acres of forests previously counted as carbon credit reserves, releasing all of that carbon into the air.

Kauk said those very issues drove Shopify to set out on its current path to fund more reliable, permanent carbon removal and storage. There are criticisms, mainly that efforts like Frontier will distract and take funding away from the more urgent need to cut fossil fuel use and the shift to renewables. Also, carbon capture technologies use a lot of energy, so some worry that they will never be viable.

Frontier evaluates its projects based on eight criteria. Carbon must be stored for at least 1,000 years, and the technology can’t create more emissions than it draws down. The projects also have to demonstrate a path to being able to store carbon for less than $100 per ton, the threshold the founders have determined will allow a technology to be cheap enough to scale.

Cost and scale are where the rubber meets the yet-to-be-paved road. While the solar industry had to lower the cost of its systems before it could compete with oil and gas, there was always a market for electricity, Minor said. With carbon removal, which is essentially a public good, no such market exists.

“We don’t think about how picking up our recycling every week makes money, we do it because it is good for our society. Carbon removal lives in a very similar world,” he said. “How do you then create the right incentives for companies to be able to effectively raise money, invest in developing new technologies that we’ll need for carbon removal to work, and then convince project financiers and buyers to actually pay for it?”

That’s where Frontier’s design as an AMC comes in. The model was applied in the early 2000s to spur the development and distribution of an affordable pneumococcal conjugate vaccine for low-income countries. Because the countries could not pay much for the vaccines, there was no incentive for companies to make them.

Then, five countries and the Gates Foundation committed $1.5 billion to an AMC, essentially promising companies that if they developed a product that met the specific criteria, they would buy it. Analyses estimate the AMC saved 700,000 lives.

“An AMC is particularly good when you really want to drive people to high production with a low marginal cost, and that’s absolutely true of vaccines and of this carbon-capture technology,” said Rachel Glennerster, a University of Chicago economist who worked on developing the AMC approach for vaccines and who has advised Frontier. “The AMC is saying, ‘We’ll guarantee that you will have a large market, and therefore it’s worth you making the investment to produce at a very large scale.’”

AMCs also encourage speed, Glennerster noted, and the climate crisis demands urgency. And, since companies don’t fully pay until the technology works well enough to capture carbon, there’s less investment risk. Frontier’s model does require some prepurchasing to help the projects, many of which are being launched by startups, get the early capital they need to develop.

Another key distinction is that Frontier is a private venture, whereas the vaccine effort was driven by foundations and governments.  Kauk said that the initial $925 million commitment is a “very strong demand signal” to carbon removal companies that there is and will be a market for their product, and that it is meant to spur more investors and governments to participate in building the market.

That has been happening to some extent already. In May, the U.S. Department of Energy announced $3.5 billion to set up direct air capture hubs around the country. In July, the U.K. announced an investment, structured similar to an AMC, of about $63 million dollars for innovative carbon removal projects.

Minor said he thinks Frontier is already having an impact in the space, in terms of its own investment and signaling to others. “In comparison to what we’re seeing even two or three years ago, this is a rocket-ship acceleration in the amount of existing market capital flowing into the space,” he said.

The amount of carbon these projects can capture at their current scale is so small that Frontier wouldn’t even be able to spend its $925 million on it. But Kauk is confident that development is going to happen quickly. She expects that, as the 2030 deadline gets closer and more carbon is stored and therefore available for purchase, the venture will bring on additional companies and increase its commitment.

“The more we can do to stack demand through Frontier, the better it’s going to be for the ecosystem,” she said. “We need to bring in those other buyers so that we can accelerate.”