Nasal and inhaled vaccines may be the best hope to finally stop COVID transmission, but the U.S. isn’t funding them: ‘It’s just unacceptable’ 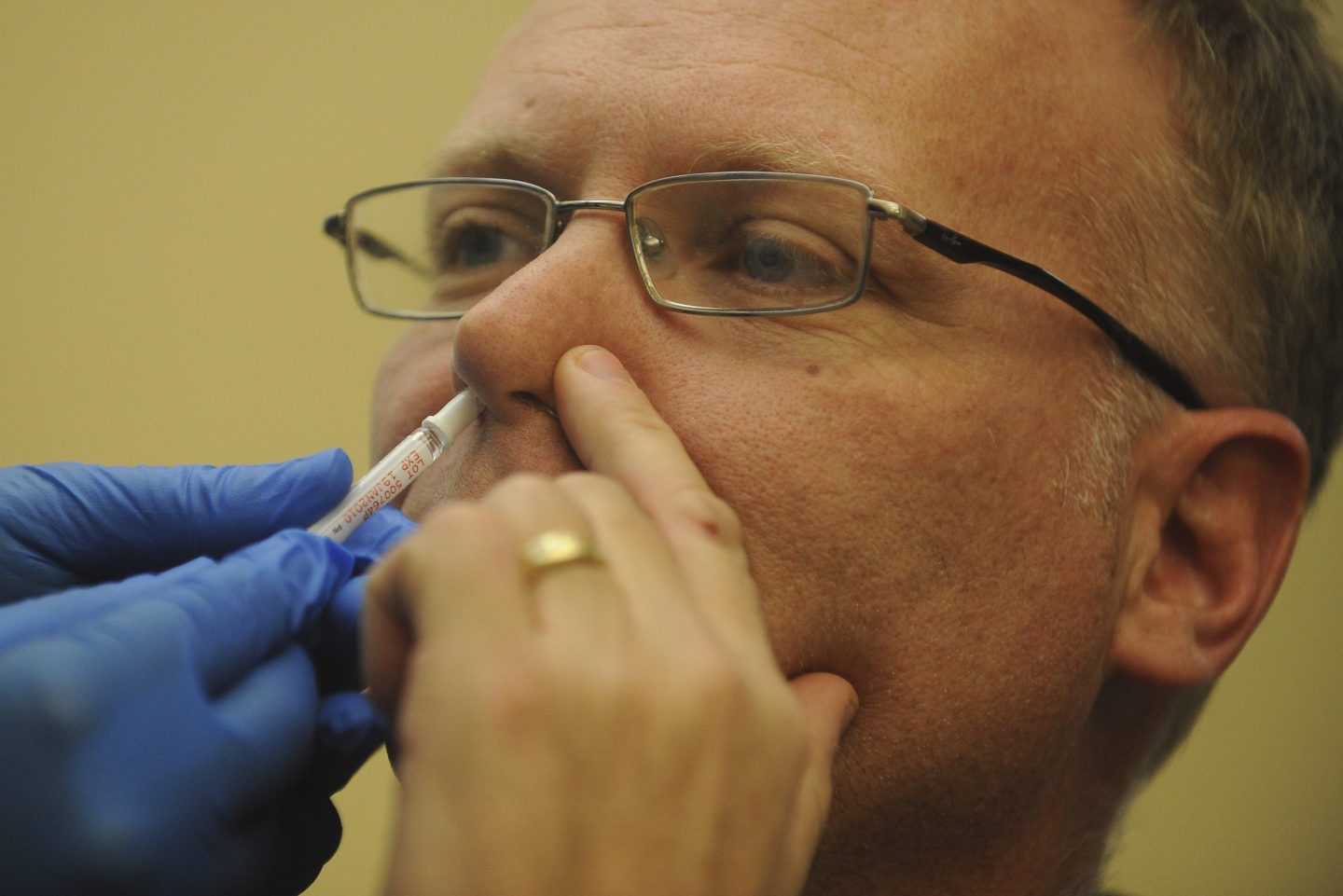 Joel Becker, Psych Social Liaison, at The University of Colorado Hospital, gets a dose of the vaccine that protects against H1N1.
RJ Sangosti—The Denver Post/Getty Images

It took a lot of muscle to protect the world from COVID.

The first generation of COVID-19 vaccines are injected straight into people’s upper arms. The ‘intramuscular’ route of transmission proved remarkably effective in slowing transmission of the disease and preventing deaths from the virus, allowing much of the world to slowly re-emerge from pandemic lockdowns.

For a while, jabs in the arm were enough, but then came the vaccine-evasive Omicron variant late last year.

“When Omicron hit, everything in the pandemic changed,” says Dr. Eric Topol, founder and director of Scripps Research Translational Institute. “That was the defining moment when the virus basically evolved to breakthrough shots.”

To be clear, initial COVID vaccines delivered intramuscularly have held up well in protecting against severe disease and death from COVID, Topol says. But Omicron and its subvariants are adept at evading vaccine-induced immunity to cause mild infections. In recent weeks, Pfizer and Moderna have released Omicron-specific boosters in a bid to control the spread of the variant.

But some experts like Topol say the muscular route is not the most effective way to attack COVID. Instead, Topol says, the best hope to tame Omicron are vaccines that target the areas of the body where people contract the disease—their mouths and noses.

“If you really want to get the nasal upper airway barrier established, you’ve got to give it locally, whether it’s oral inhalation or a nasal spray vaccine,” he says.

One such effort is getting off the ground in China. Last week, China-based CanSino Biologics became the world’s first vaccine maker to receive regulatory approval for an inhaled COVID-19 vaccine. Preliminary data has shown that the vaccine, as a booster, may be more effective in producing antibodies that fight off COVID than its muscle-injected counterparts, but real-world data proving its efficacy may still be months away. In the meantime, experts are wondering why the U.S. has fallen so far behind on such a potentially transformative vaccine technology.

How to inhale a vaccine

On Sept. 5, China’s government approved CanSino’s oral inhalation COVID-19 vaccine for emergency use, green lighting the rollout of the vaccine as a booster option in the country.

The approval marked a milestone in the oral inhalation vaccine technology. “We are the first company in the world to commercialize any inhaled vaccine,” Pierre Morgon, executive vice president at CanSino Biologics, told Fortune.

The vaccine is an inhaled version of the successful one-shot COVID-19 vaccine that CanSino had previously developed, which uses viral vector, adenovirus technology similar to Johnson & Johnson’s COVID-19 vaccine. The World Health Organization approved CanSino’s vaccine for emergency use earlier this year after clinical trails proved the jab was 58% effective in stopping infections and 92% effective in protecting against severe cases and deaths.

To make it, CanSino reduced the dosage level of the injectable vaccine and put the solution in a device called a nebulizer. A nebulizer turns liquid medications into a breathable, fine mist, and is commonly used to administer drugs to asthma and COPD patients, says Morgon.

Days after CanSino’s approval, India approved a nasal spray vaccine from Bharat Biotech. The approval made India the first country to approve a nasal COVID-19 vaccine outside of Russia and Iran, and it also marked the first time that nasal vaccine spray has been deployed since Flu Mist, which is available in the U.S. and other countries globally for the flu.

“These little [COVID fighting] particles from the vaccine can get deeper into your lungs” with the inhaled version compared to a sniffing one, he says.

Topol says the important thing is that vaccine manufacturers are beginning to target airwaves rather than muscles.

“Once you get the upper airway protected, it’s probably not much of a difference,” he says.

In China, it’s unclear how useful the CanSino’s inhaled vaccine will be.

CanSino published promising early stage clinical data showing that the vaccine outperformed an injected COVID-19 jab from Chinese maker Sinovac as a third shot booster. In a trial with a few hundred people that had already received two Sinovac shots, 92.5% of the recipients of CanSino’s inhaled vaccine demonstrated neutralizing antibodies for Omicron after four weeks. Hardly any Sinovac booster recipients had antibodies after that same time.

But CanSino has not published any real world efficacy data yet.

“My concern here is that I have not seen any systematic data to show the actual efficacy rates of the vaccine in protecting against infection, severe cases, or deaths,” says Yanzhong Huang, a senior fellow for global health at the Council on Foreign Relations. Bharat Biotech, meanwhile, has not published any early stage or real world data on its nasal spray.

CanSino’s rollout may also be limited by China’s COVID zero policy. China continues to pursue a policy of eradicating COVID completely from its borders, even though it has one of the world’s highest vaccination rates and even as the economic costs of the policy mount. The COVID zero policy will make it difficult for CanSino to evaluate the vaccine’s efficacy given the relative lack of the disease in the country compared to the rest of the world.

China’s COVID zero mandates perfection against the virus, so it appears unlikely that China’s government would prioritize an inhaled vaccine, even if it performed better than injected ones, unless the vaccine worked flawlessly. It’s also unclear how motivated Chinese citizens will be to take another vaccine now than more than 90% of the country is fully vaccinated, says Huang.

“Unless that vaccine is 100% effective in preventing infections, I don’t see how it’s fundamentally different from the other vaccines,” says Huang. “It’s pretty a saturated market there.”

Morgon says CanSino is working on creating additional clinical studies in countries in Southeast Asia and South America, and hopes that CanSino can release the vaccine globally by the end of this year.

“It will be relatively easy to collect data… in countries that are not implementing a zero COVID policy,” he says.

It is unlikely that the U.S. would ever approve CanSino’s product given the geopolitical tensions between the U.S. and China, Topol says.

Topol has been pushing the U.S. government to adopt an ‘Operation Nasal Vaccine’ to fund the development of nasal vaccines similar to how Operation Warp Speed helped fund the first generation of COVID-19 vaccines. Over the summer, the U.S. government hosted a ‘future of vaccines’ summit that discussed government support for nasal sprays and other new vaccine technologies. But additional funding for vaccine development has been held up in U.S. Congress for months, and it’s unclear if the government will allot additional vaccine funds.

Of course, vaccine makers like Pfizer (which spends more than $10 billion annually on research and development) do not need necessarily government support to fund the development of new vaccine technology.

Morgon says large firms have refrained from nasal vaccine investments because they already have a product that works. “Big companies tend to be pretty conservative,” he says.

Fortune reached out to vaccine makers Johnson & Johnson, Pfizer, BioNTech, Moderna, and Novavax about their plans to pursue developing nasal spray or oral inhalation COVID-19 vaccines. A Pfizer spokesperson told Fortune the company was “not currently” working on a nasal spray or inhaled vaccine, but said the firm believed it would take “multiple vaccines and treatments to overcome the COVID-19 pandemic.” The other firms did not respond to Fortune’s request for comment.

Topol says the lack of focus on nasal vaccines may just be a product of declining demand for COVID-19 vaccines and a growing belief among many in the U.S. and elsewhere that the pandemic is over.

“Everybody’s tired,” he says. “But we got a ways to go and we can contain this virus. We won’t do it just by hoping and praying. [We will beat COVID-19] by doing innovative things.”