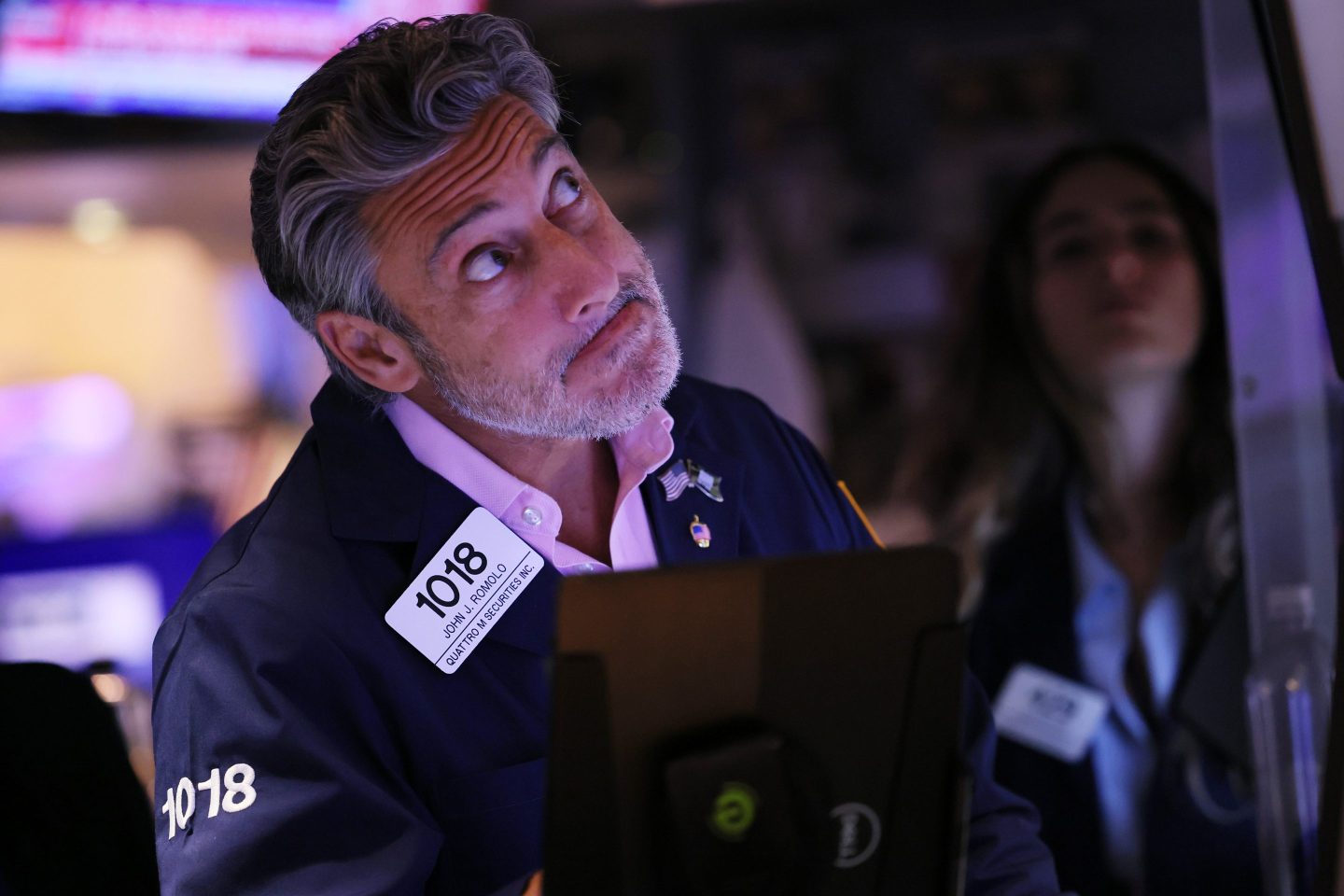 Traders work on the floor of the New York Stock Exchange during afternoon trading on September 13, 2022
Michael M. Santiago—Getty Images

A semblance of calm returned to markets on Wednesday after the carnage sparked by hotter-than-expected American inflation that prompted investors to reassess the outlook for interest rates and economic growth.

US equity-index futures were steady after shares had their biggest drop in more than two years Tuesday, with the S&P 500 falling more than 4% and the Nasdaq 100 sliding more than 5%. A gauge of the dollar was little changed after jumping the most in three months on Tuesday. The 10-year Treasury yield ticked higher, hovering near a decade-peak.

The US inflation reading that triggered the stock rout — reversing a four-day rally — has swaps traders certain the Federal Reserve will raise interest rates three-quarters of a percentage point next week, with some wagers appearing for a full-point move. That leaves investors weighing the prospect of tighter conditions across a swath of markets after jumping back into risk-sensitive assets in recent days on hopes that inflation would cool more.

“An easing in inflationary pressure later this year will allow the Fed to broaden its focus again in order to manage the economic slowdown. However, we are not there yet,” said Mathieu Racheter, head of equity strategy at Bank Julius Baer. “In the meantime, earnings estimates will likely continue to be adjusted downwards, while higher real rates keep valuations at bay. For now, we recommend staying defensively positioned.”

The Stoxx Europe 600 index slipped about 0.5%, with utilities leading the decline as the European Commission considers plans to contain the energy crisis. The UK’s benchmark underperformed after Britain’s inflation rate eased from its highest rate in four decades, while still leaving the pace of price increases uncomfortably high for the Bank of England.

Asian stocks and bonds tumbled in the wake of the broad-based selloff on Wall Street while the yen strengthened after Japan warned of possible intervention in the currency market. Equity indexes in Japan, Hong Kong and Australia slumped.

The yen pulled back from a slide toward the key 145 level versus the dollar after a Nikkei report that the Bank of Japan conducted a so-called rate check with traders to see the price of the currency against the greenback. The finance minister warned he wouldn’t rule out any response if current trends continued. The country’s 10-year bond yield rose to 0.25%, the upper end of the central bank’s policy band.

The reversal in markets casts a dark shadow over the debate about the outlook for the global economy and markets. Bank of America Corp.’s latest survey showed the number of investors expecting a recession has reached the highest since May 2020.

The two-year Treasury yield, the most sensitive to policy changes, rose three basis points after jumping as much as 22 basis points Tuesday, pushing it more than 30 basis points above the 10-year rate and deepening an inversion in what is generally a recession warning.

“Markets had tried desperately to spin a bull case and fight the Fed, basically, and that’s a dangerous place to be,” Carol Schleif, deputy chief investment officer at BMO Family Office said on Bloomberg TV. Looking further ahead, she pointed to “a great deal of fiscal stimulus on its way into the market to take some of the place of the monetary stimulus that’s being withdrawn.”

The US consumer price index increased 0.1% from July, after no change in the prior month, Labor Department data showed. From a year earlier, prices climbed 8.3%, a slight deceleration but still more than the median estimate of 8.1%. So-called core CPI, which strips out the more volatile food and energy components, also topped forecasts.

The greenback’s strength weighed Asian currencies, with the Korean won among the big decliners. The People’s Bank of China set the daily reference rate for the yuan at the strongest bias on record versus the average estimate in a Bloomberg survey of analysts and traders.

“Many emerging markets are feeling the heat of the strong US dollar,” said Chi Lo, senior market strategist for Asia Pacific at BNP Paribas Asset Management, citing their debt burdens in greenbacks. “Only China can afford to defy this global rate-rise trend by keeping its easing policy stance.”

Bitcoin nursed a drop of 10% overnight, the biggest decline since cryptocurrencies plunged in June.