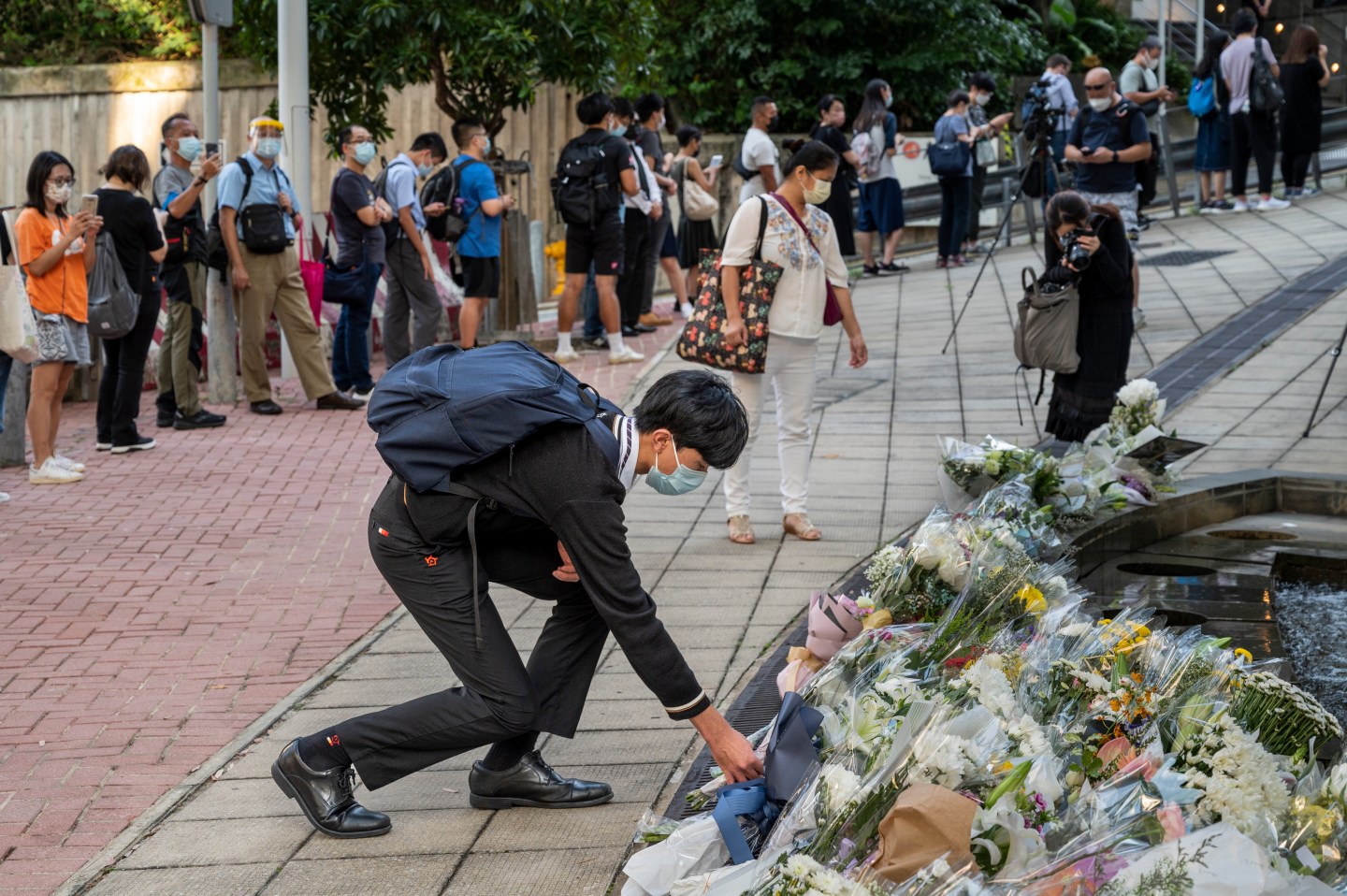 A mourner places a flower bouquet outside the British Consulate General after the passing of the former Queen. Queen Elizabeth II, the UK's longest-serving monarch, has died at Balmoral aged 96, after reigning for 70 years.
Sebastian Ng—SOPA Images—LightRocket—Getty Images

In Hong Kong, the death of Queen Elizabeth II has kindled a mass outpouring of mourning—alongside nostalgia for a complicated colonial legacy that many Hong Kongers still regard as the city’s golden age.

On Monday, in blistering heat and humidity, over 2,500 Hong Kongers stood in line for three hours to lay flowers and pay their respects to the Queen outside the British consulate, according to the Financial Times. On Tuesday, the throngs of mourners reappeared, and the crowds are expected to continue into next week.

The Queen’s death prompted mixed reactions in former British colonies across Africa and Asia, with many pointing out that the royal family symbolized a legacy of exploitation, repression, and white supremacy.

Britain used Hong Kong as a trade port and financial hub, and to expand its business holdings at a time when its grip on other colonies was in decline. When the British empire returned Hong Kong to Chinese rule in 1997, many residents were enthusiastic about the end of British rule and being reunited with China.

But in the post-handover era, many Hong Kongers began reminiscing about British colonial rule, especially in light of a recent Chinese government crackdown on freedom in the special administrative region.

“The flowers for the Queen in Hong Kong is more than just mourning,” one Hong Kong activist tweeted. “It is also a silent protest against China’s reunification and oppression.”

For nearly half a century, Queen Elizabeth II served as Hong Kong’s head of state.

Britain wrested control of Hong Kong from China in 1842, after the First Opium War forced Beijing to cede Hong Kong island, and eventually other territories that now make up Hong Kong. Britain used the Opium War to pry open Chinese markets for British products, namely opium, after realizing it had little that Chinese citizens wanted. China regards this time as the start of its “century of humiliation.”

Hong Kong experienced growing prosperity and democratic reforms later in the 1980s and 1990s. But the decades before were more turbulent.

Colonial police were criticized for using excessive force and repressing protests during 1967 and in the 1980s. Britain during its rule over Hong Kong never granted citizens universal suffrage.

In 1997, the U.K. returned Hong Kong to China after 150 years of colonial rule. Under the terms of the agreement, the Chinese government promised to maintain Hong Kong’s political and social freedoms under a “one country, two systems” arrangement to be in place until 2047.

Yet many in Hong Kong regarded the 1997 handover as the end of a free and prosperous era in Hong Kong. The return to Chinese rule sparked a mass emigration wave; over 500,000 people fled Hong Kong for the U.K., Canada, and Australia from 1987 to 1996, according to Hong Kong government figures. And since 1997, nostalgia and fondness for British rule has grown as Beijing tightens its grip over control of the city-state.

An unlikely symbol of rebellion

Some Hong Kongers have also taken traditionally “British” symbols and redefined them as icons of freedom and prosperity over the past few years.

During Hong Kong’s 2019 anti-government protests that gripped the city, protesters sang “God Save the Queen” and hung the U.K.’s Union Jack flag inside Hong Kong’s legislature. One 63-year-old protester, referred to affectionately as “Grandma Wong,” became known for waving a large Union Jack flag during the protests.

“I stand with Hong Kong’s future. I worry about Hong Kong youth. I miss colonial times. The British colonial time was so good for us. I saw the future,” she told Reuters at the time.

Nathan Law, a prominent Hong Kong activist now in exile in London, tweeted on Sept. 8: “The Queen is loved by millions of Hong Kong people. The thoughts and prayers of us are with the Queen and her family.”

One postgraduate student, 23-year-old Jack Chan, told the FT that he “shed tears” when he heard of the Queen’s death. “Those were the better days before 1997. Things have rapidly diminished especially over these past few years,” he said.

The government crackdown after the 2019 protests has sparked a new emigration wave of Hong Kongers to the U.K. and other countries. Over 100,000 residents have left Hong Kong in the past year, owing to stringent COVID-19 restrictions, but also because of a sense of a loss of freedom and fear of repression. In recent years, Hong Kong police have arrested thousands of activists, former lawmakers, and journalists.

Yet for many Hong Kongers, the legacy of British rule will remain intertwined with their vision for Hong Kong. As one mourner wrote in a note displayed outside the British consulate:

“You will be remembered for your elegance and legacy: a once free and civilized Hong Kong. Thank you for everything.”