15,000 nurses just walked out of work. Here’s what you need to know about one of the largest strikes in the sector’s history 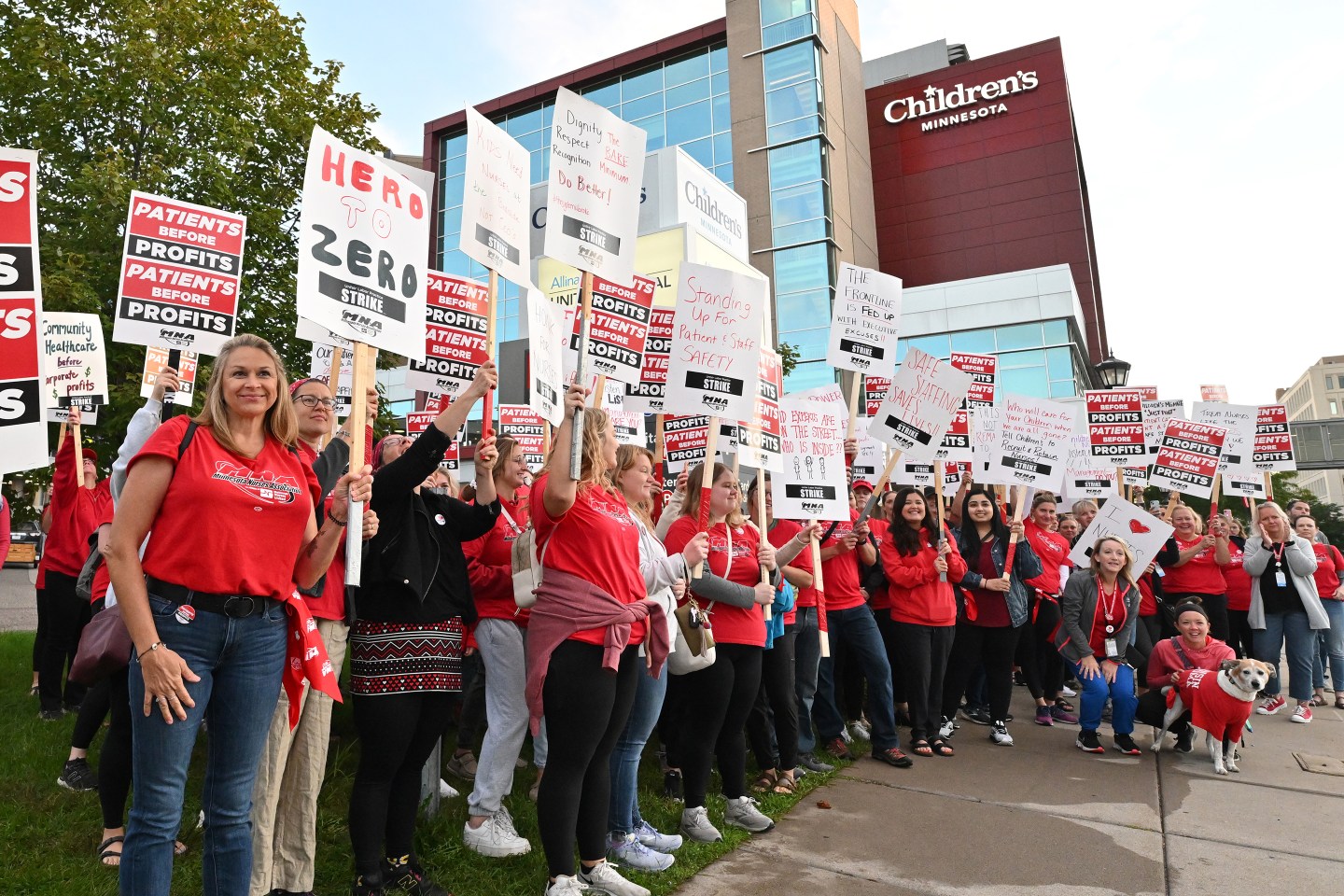 Nurses at Children’s Minnesota and United Hospital in St. Paul were among some 15,000 nurses at 16 hospitals in the Twin Cities and Twin Ports region who walked off the job Monday, Sept. 12, 2022.
John Autey—MediaNews Group/St. Paul Pioneer Press/Getty Images

Over the past few years, the U.S. has faced increased demand for nurses amid an exodus in frontline health care providers—the result of low pay and more difficult working conditions.

On Monday, thousands of nurses in Minnesota left work to protest those conditions.

With over 15,000 nurses from 16 hospitals in Minneapolis, Saint Paul, and the surrounding region participating, the work stoppage represents the largest private sector nurse strike in U.S. history.

The nurses, all unionized members of the Minnesota Nurses Association (MNA), voted to move forward with the strike last month. They announced the plan on Sept. 1, adhering to a legal requirement that health care workers provide at least 10 days’ notice to their employer when preparing for a work stoppage. The strike is expected to last three days.

The nurses’ three-year contract expired in May, and today’s strike follows a series of unsuccessful bargaining sessions for a new contract.

Central to those sessions, which began in March, have been negotiations around retention, understaffing, and overwork among nurses.

“Nurses do not take this decision lightly, but we are determined to take a stand at the bargaining table, and on the sidewalk if necessary, to put patients before profits in our hospitals,” said MNA president Mary C. Turner, RN, in a press release announcing the strike.

Lee Adler, a professor at Cornell University’s school of industrial and labor relations, told Fortune that the strike’s purpose is likely to underscore workers’ frustration with the ongoing negotiation process. “It’s so large, we’ve never seen anything so expansive,” he said, adding that the relatively limited time frame for the strike shows that it’s more of a “wake-up call” for the nurses’ employers than any attempt to interfere with patient care.

Twin Cities Hospitals, which represents the impacted hospitals, says that the strike could have been avoided.

“The Twin Cities Hospitals Group is deeply disappointed that the nurses’ union has chosen to strike before exhausting all efforts to reach an agreement,” said Paul Omodt, a spokesperson for the group, in a statement to Fortune. “To be clear: The union’s choice to strike is theirs and theirs alone.”

While the nurses strike, the affected hospitals will continue to be staffed by nurse managers and other leaders, replacement nurses, and traveling nurses, according to Omodt. “People may experience longer wait times for services while care teams triage patients,” he said.

The Minnesota Department of Health (MDH) will monitor the hospitals throughout the strike to ensure they continue to provide proper care.

The strikes come as more Americans support labor unions than at any time in half a century. Earlier this month, Gallup’s most recent Work and Education Survey revealed that 71% now say they support organized labor. The last time approval was so high was in 1965.

The MNA’s strike is a sign that worker power continues to be strong, said Adler. “It almost makes the serious observer of labor relations wonder whether a more massive set of work stoppages are on the horizon,” he said, noting that thousands of rail workers in the U.S. are in a position to strike as early as next week.

“Workers are no longer willing to be the daily, quote, Super Glue to hold these systems together,” he said.