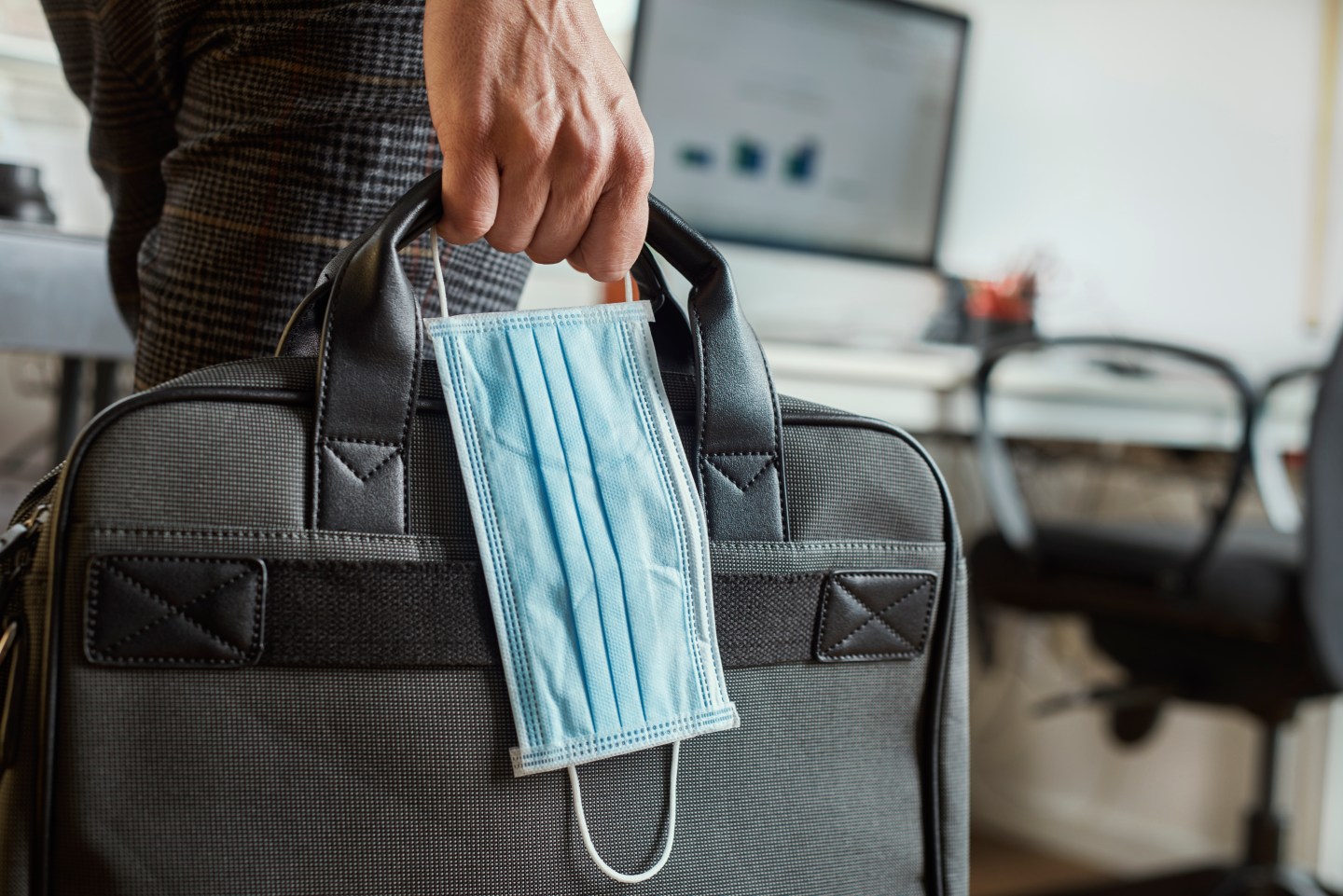 The latest loosened COVID guidance from the U.S. Centers for Disease Control and Prevention and the advent of Omicron boosters make it exceedingly clear: Employers that want workers to return to the office can demand it, and will.

Social-distancing is no longer recommended—nor is quarantining if you’ve been in close contact with someone with the sometimes deadly virus. The suggested quarantine length was lowered to five days—a time at which many people still spread the virus, according to researchers. Protection from Omicron boosters seemingly serves as further permission for employers to compel workers to return. Boosters are expected to provide good protection against severe disease and death from dominant circulating strains BA.4, BA.5, and their offspring. A point often missed: They’re not expected to provide protection from infection and aren’t known to prevent long COVID (though they may reduce the likelihood of it).

If it wasn’t clear before, it is now: Working from home is no longer a veritable right for those eligible, but a privilege.

In the workplace, at least, COVID seems over this fall.

Even before the August revision to CDC’s COVID guidance and the September deployment of Omicron boosters, remote-eligible jobs were on the decline, according to a summer report from Coresignal, a business that compiles data for investment intelligence, lead generation, and trend forecasting, among other purposes.

U.S. remote working peaked during the summer of 2021, when the Delta variant became dominant in the U.S., scuttling the return-to-office plans of many businesses. The percent of jobs available for remote work increased by nearly 67% from June through August of last year, according to the report, which examined more than 40 million public job postings from August 2020 through March of this year.

But remote jobs, as a share of overall jobs, have been on a downward trend this year. As of February, only 10% to 15% of job offerings allowed remote work, the study found. Return-to-work mandates and hybrid policies are on the rise, though some workers are still defying them. As of this summer, slightly less than half of workers whose employers expected them to return to the office were going in five days a week.

But most of those workers aren’t sheltering at home because they’re concerned about COVID, according to a February Pew Research Center report. They say they prefer to work from home–and some say they’ve relocated away from the office altogether.

Those working from home at least some of the time told Pew that doing so allows them to better balance work with their personal lives, and that it’s made finishing work and meeting deadlines easier, not harder. And nearly 75% say they don’t feel the move home has affected their ability to work their way up the ladder.

Of those who are working at home all or most of the time, only a fifth say they’d be very comfortable returning to the office if they were compelled to, and only a third say they’d be somewhat comfortable. This is likely because most employees who work solely from home are not fully satisfied with coronavirus-prevention measures put in place by their employers, according to Pew.

It’s the conclusion we’ve all been seeking: an end to the nearly three-year scourge called COVID, which has caused nearly 1 billion illnesses and more than 1 million deaths in the U.S. alone.

But there’s not a lot of–or any–partying in the streets to be witnessed–certainly not among workers. More than 60% who are employed outside of the home and have a choice do not go into the office, according to Pew.

To be fair, it’s hard to celebrate a manufactured ending.

The pandemic is far from over–even if, as presidential physician Dr. Anthony Fauci declared earlier this year, its “acute phase” is. While cases appear to have plateaued to a persistent, endemic level in the U.S., more than 70,000 cases are being diagnosed each day–and this while testing reported to public health authorities is at an all-time low. Deaths still sit around 310 a day, a number society has collectively numbed to over the months and years, or flat-out chosen to ignore.

Wastewater levels of COVID–perhaps the best tell we currently have of the disease’s spread in a community–were recently at or around all-time highs in many U.S. locations, belying testing data.

And we’re still unsure of what’s to come.

The White House this spring warned that the U.S. could see 100 million COVID infections this fall and winter, and potentially a sizable wave of deaths.

It’s currently unknown what might fuel this wave, as the current surge of BA.4 and BA.5 and spawns appears to be leveling off. Possible contenders include Omicron spinoffs BA.4.6 and BA.2.75, Dr. Andrew Pekosz, a virologist and professor at the Department of Molecular Microbiology and Immunology at the Johns Hopkins Bloomberg School of Public Health, said Thursday.

Both variants are able to partially evade vaccine immunity but “should be recognized” by the new booster. Still, more variants are expected this fall, he said.

Pekosz expects a “moderate” fall/winter surge. When asked about the CDC’s projections, a spokesman this week told Fortune that “most scenarios indicate that hospitalization rates from COVID-19 infection will be similar to current rates or decline slowly over the next few weeks,” though there is, of course, a high level of uncertainty.

As of press time, a White House spokesperson had not replied to a request for an updated fall/winter COVID forecast.

Annual COVID vaccines, much like annual flu shots, will likely be a thing of the near future, White House officials including Fauci and COVID czar Dr. Ashish declared this week. The announcement further bolstered the case that the pandemic has (kind of) drawn to a close, or at least reached a more manageable point.

While the hope is that the vaccines hold up to variants this fall and perhaps even as long as a year, some experts are already warning that the duo’s expectations are unrealistic–if only because vaccine immunity currently only lasts four to six months.

“I don’t see any evidence for how an annual COVID shot will provide durable protection … without better vaccines,” Dr. Eric Topol, a professor of molecular medicine at Scripps Research and founder and director of the Scripps Research Translational Institute, said this week in a tweet.

“To give a false impression of year-long protection ([against] severe disease and death) with the data in hand is not acceptable,” he later added.

Even the flu vaccine doesn’t offer year-long protection, Dr. Lee Altenberg, a theoretical biologist and professor at the University of Hawaiʻi at Mānoa, pointed out via tweet, citing a 2019 article from Clinical Infectious Diseases that says the flu shot’s protection lasts only 90 to 160 days at most.

Such a length of protection may generally work with a seasonal virus like the flu. But COVID isn’t seasonal, Altenberg and other experts say, with surges primarily driven by new variants.

“This ‘annual COVID shot’ is more urgency-of-normal denial of the pandemic’s reality—an attempt to pretend it is like the flu—to gaslight people [that] it’s the flu,” Altenberg tweeted.

China aside, most countries have shifted to an approach of “learning to live” with the virus and, thus, letting it spread freely. Demands that workers return to the office are a natural extension of this approach in the workplace.

But employers might be careful what they wish for.

Vaccinations don’t prevent the spread of COVID–and while they may help reduce the chances of getting long COVID, the jury is still out.

Up to one in five American adults who’ve lived through COVID-19 are living with long COVID, the House Select Subcommittee on the Coronavirus Crisis said this summer. It’s a condition defined by symptoms that persist or appear long after the initial COVID infection is gone. An estimated 1 million Americans have been forced to leave the labor force because of medical complications from the nascent condition.

“I have treated many nurses and physicians—some have not been able to return to the operating room or to the front line or the patient bedside,” Dr. Monica Verduzco-Gutierrez, a physiatrist from the University of Texas Health Science Center, testified before the committee this summer.

“Marathon runners who cannot even walk a mile. A young mother who can’t run after her children without her heart rate going to 180 and getting short of breath.”

Overseas, labor force participation in the U.K. has dropped by around 1.3% for the population aged 16 to 64, a Bank of England representative reportedly said this summer. Similar trends are being seen in the U.S. and abroad.

Employers can learn to live with the virus at the office–but the impact of long COVID on the workforce may come back to haunt them.

This fall and forevermore, one thing is certain. In the words of Dr. Amesh Adalja, an infectious disease specialist and senior scholar at the Johns Hopkins Center for Health Security, COVID isn’t going anywhere.

“The virus … can never be eradicated, never be eliminated,” he recently told Fortune.