Here’s how much the typical Gen Z worker makes in every U.S. state 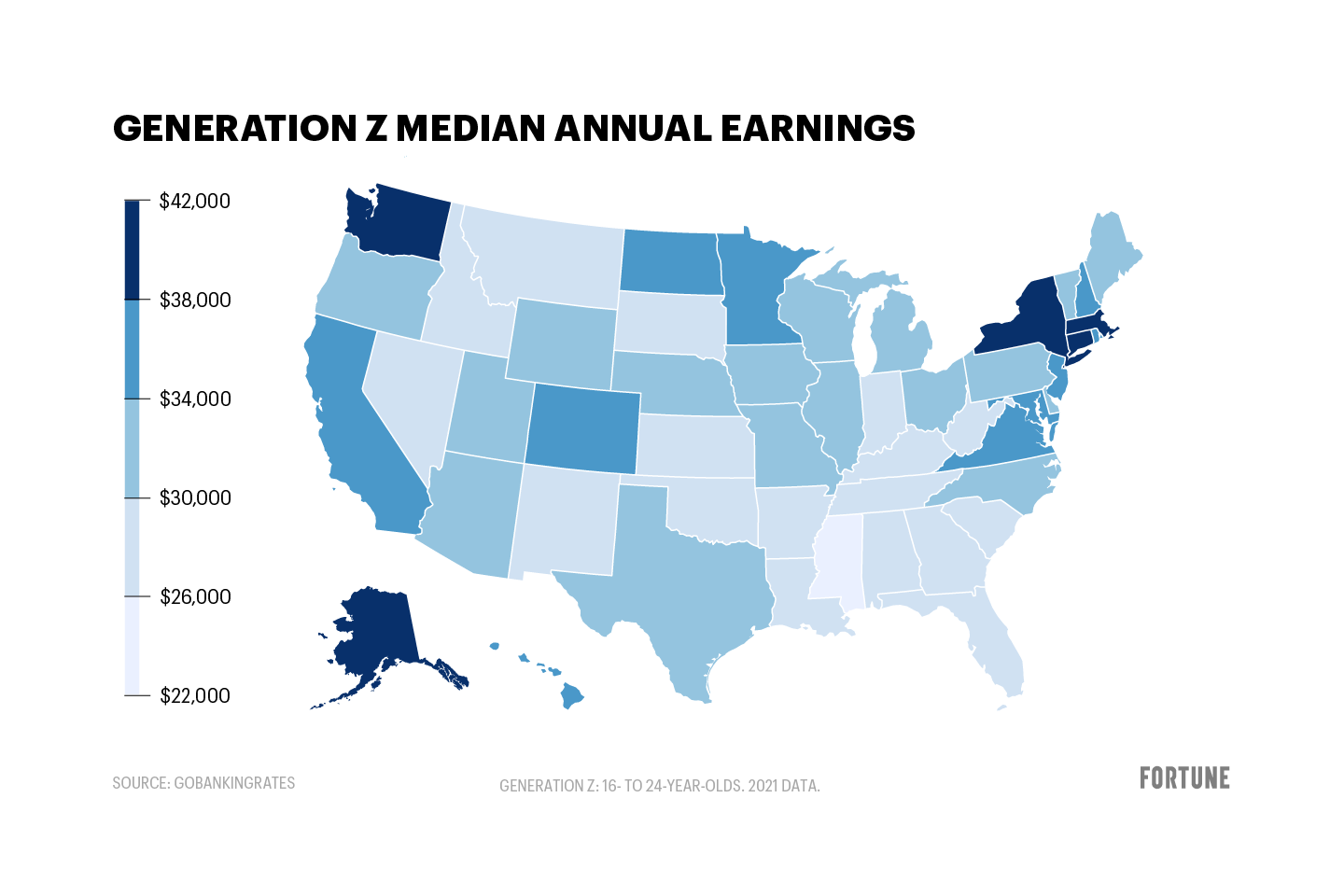 The typical annual salary for Generation Z workers was $32,500 in 2021, according to recent research by GoBankingRates. That said, individual salaries vary significantly across different states.

The survey examined the median annual earnings of Gen Zers ages 16 to 24 years old to determine how their income varies by state. This number reflects the middle point of all salary data, so half of workers earn more than this and also half earn less.

Here’s how much Generation Z earns annually by state.

Born between 1997 to 2012, Gen Z made up just over 12% of the American workforce in 2020, according to the U.S. Bureau of Labor Statistics, and it is on track to hit 30% of the workforce by 2030. This is good news for employers as Gen Z is also on its way to becoming the most well-educated generation yet.

But even with these accolades, Gen Zers barely make enough to afford the cost of living in some states, as Bankrate’s data shows.

Hawaii has the highest cost of living index in the nation, but only the tenth highest median salary. With housing costs exceeding three times the national average—renters can expect to pay $1,651 for a two-bedroom apartment in 2022, according to World Population Review. This forces renters to pay nearly 55% of their salary towards housing alone, 25% more than the recommended housing expense.

On the other hand, Mississippi has the lowest cost of living and the lowest median salaries for young workers in the nation. Renters in 2022 pay on average $777 monthly for a two-bedroom unit in 2022, according to the World Population Review, while the median worker earns $25,346 per year. That means more than 36% of their annual salary goes towards housing.

That said, a higher salary doesn’t necessarily mean they have an easier time affording rent and other necessities. Even in Massachusetts, where Gen Zers earn the highest median salary of $41,491, some still can’t afford the cost of living. In 2022, the average rent for a two bedroom apartment was $1,715 a month. But in Boston, some units go for as much as $2,399, which costs nearly 70% of the median Gen Zers salary.

Looking forward, Generation Z is expected to make a major impact in the global workforce as their income is expected to increase to $33 trillion by 2030—over one-fourth of the world’s income and exceeds millennials’ income levels.