Pakistan is facing major flooding and damage. Here’s how you can help 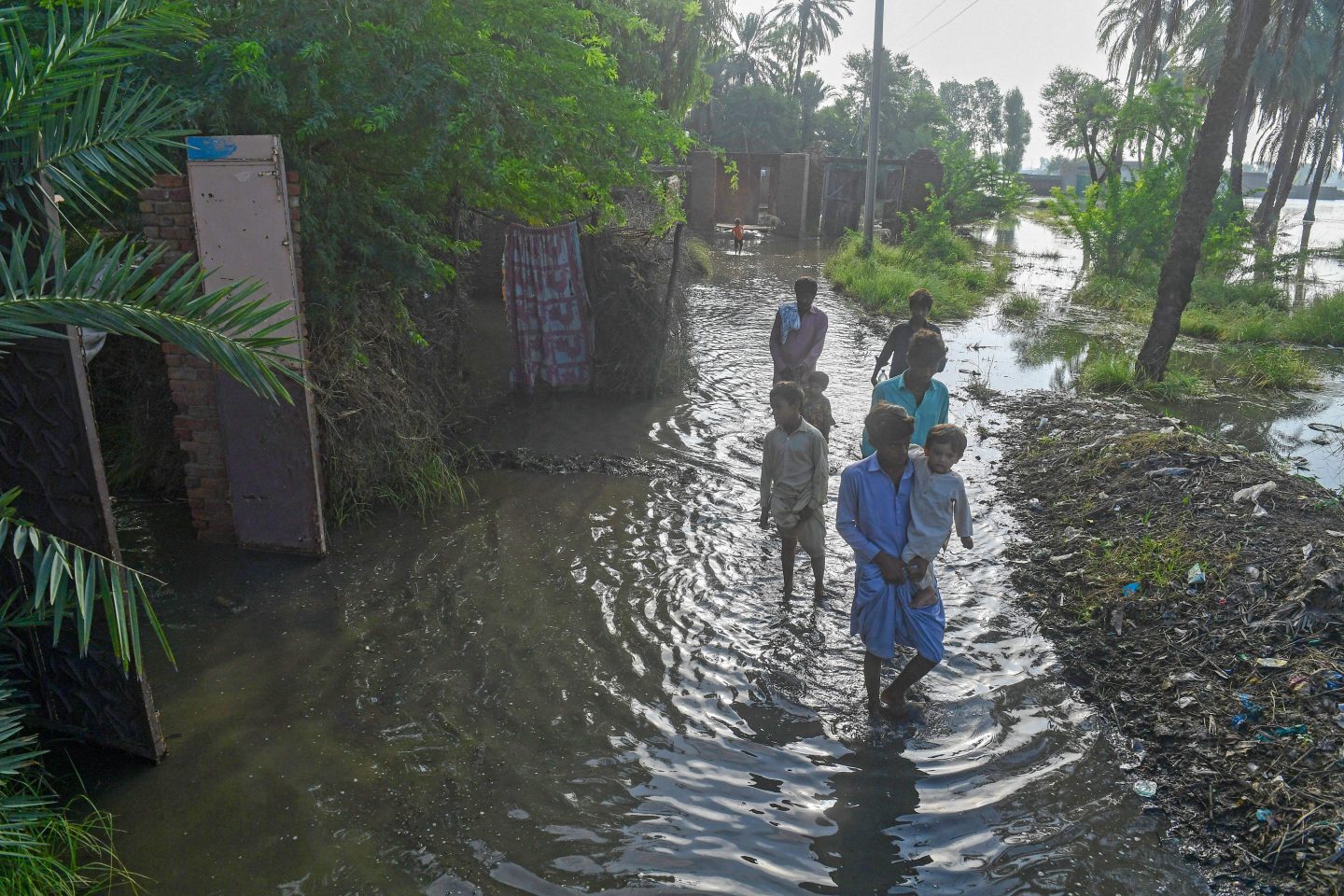 Heavy monsoon rains have sent extreme floods sweeping across Pakistan since June, killing over 1,100 people and causing over $10 billion in damage.

More than 33 million people have been impacted by the floods, with many losing their homes, farmlands that served as a source of food and income, and access to internet and schools. The catastrophe has also damaged 3,000 miles of roads as well as hygiene infrastructures, cutting residents off from access to healthcare, aid, and clean water. There have already been incidences of water-borne and skin diseases and respiratory infections, per the most recent report from the OCHA Humanitarian Advisory Team in Pakistan.

The disaster is a “climate catastrophe,” Sherry Rehman, Pakistan’s federal Minister for Climate Change, said in a news interview. “Many districts are beginning to look like they’re part of the ocean,” she added.

“I have no money, but hopefully some way out will be found,” Ismail told reporters. “Pakistan is drowning. There has been so much damage everywhere.”

Home to 3,000 glacial lakes, 33 of which the United Nations Development Program (UNDP) deems “prone” to outburst flooding, Pakistan raised over $43.5 million with the UNDP back in 2017 to fund the extension of its Glacial Lake Outburst Flood risk reduction program. But it wasn’t enough.

Here are some organizations you can donate to that are providing aid for Pakistan flood victims.

An international non-profit organization that has been providing disaster management, health services, education, and clean water to Pakistan since 1990. Donations can be made on their website for the Pakistan Emergency Flood Relief Appeal project.

An international independent aid organization working alongside communities experiencing conflict and disaster across 60 countries since 1982. The organization is working to provide emergency supplies including food, cleaning and personal hygiene products, and blankets to displaced families and people living with disabilities in Pakistan. Donations can be made online.

An international group that began working with Pakistan in 1985. Currently, the organization is providing healthcare services and training to treat water-borne diseases that arose from a lack of access to clean water in Pakistan. They have already distributed over 30,000 water purification tablets to health officials working in impacted districts and plan to send over 25,000 more soon. Donations can be made on their website.

The committee has deployed emergency response teams to provide immediate assistance in Pakistan. Since 1980, the IRC has supported Pakistan by providing food, supplies, and medical support. They have helped nearly 20,000 Pakistan flood victims so far. Donations can be made online.

A non-profit organization that has served families in Pakistan since 1992. During the flooding crisis, they have provided food, access to clean and safe water, and healthcare. They have also provided emergency responses such as animal fodder for the livestock impacted during the floods. Donations can be made online.

A global community of humanitarians working in over 40 countries with families impacted by disaster and climate change since 1979. The team is working to provide clean water, food, and other necessities to families left homeless in Quetta and Balochistan, which received the heaviest rainfalls. Donations can be made on their website.

Since 1987, Muslim Aid has worked to uplift the communities in Pakistan to deliver emergency supplies to those in need. During the floods, the group established an emergency fund with its partners to provide aid, food, water, shelter, medicine, and other necessities to families. Donations to the fund can be made online.

Founded in 1947, the society works directly with districts like Punjab, Sindh, and Baluchistan to provide first aid to flood victims. The society worked with Chinese ambassador Nong Rong, who was able to donate $300,000 in emergency cash assistance to help flood victims. Donations can be made online and will be used to provide healthcare and disaster management.

Founded in 1919, it was the first global movement for children. Today, the organization continues to respond to crises impacting vulnerable youth. Save the Children is providing food, water, and blankets to children impacted by the floods in Pakistan. Donations can be made through their website.

A non-profit organization founded in 2014 by a popular cricketer from Pakistan works with chapters in the U.S., U.K., Australia, and South Africa to improve the conditions of communities facing emergencies. Working directly in Balochistan and Sindh, the flood relief drives have provided victims with food, shelter, blankets, and clothes. Donations can also be made online.

The United Nations Children’s Fund founded in 1946 works to provide emergency food and health care to families devastated by disasters. UNICEF has already provided supplies totaling $1 million and emergency services to Balochistan, Sindh, and Khyber Pakhtunkhwa. The fund plans to provide another $1.3 million to meet urgent needs of victims. Donations are accepted through their website.