Jackson, Miss., has no clean water 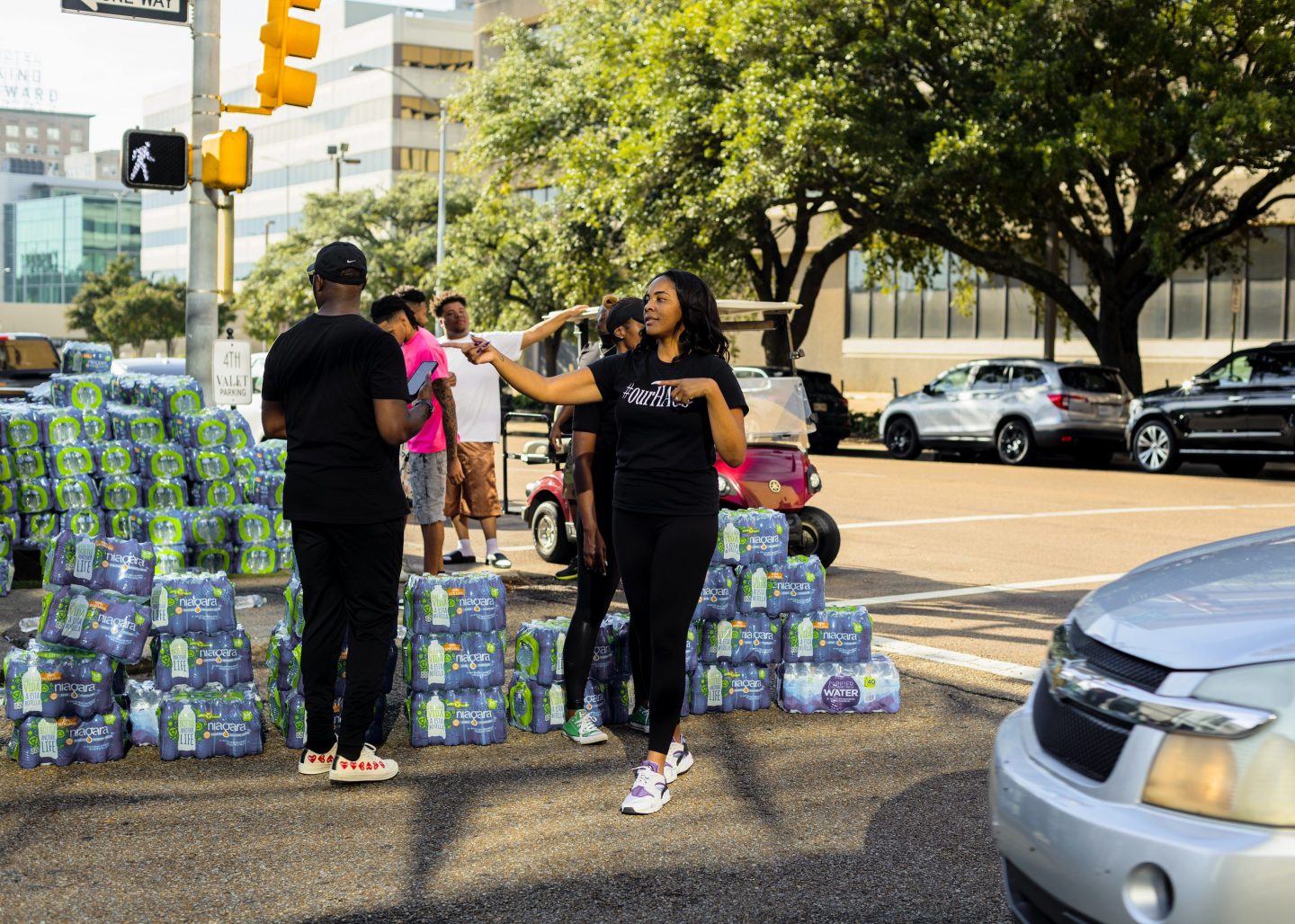 Volunteers distribute cases of bottled water during a water shortage in Jackson, Mississippi, on Thursday, Sept. 1, 2022. The governor of Mississippi called in the National Guard to help residents of the state capital after a plant failure left at least 180,000 people in the area without access to safe water.
Houston Cofield/Bloomberg via Getty Images

The news coming out of Jackson is grim.

The immediate cause has been last week’s torrential rains which have caused the Pearl River, which runs through the capital city, to crest some 35 feet higher than normal. The resulting flooding has besieged the city’s water treatment plant, taking it offline. “Until it is fixed, it means we do not have reliable running water at scale,” Gov. Tate Reeves told the public. “It means the city cannot produce enough water to fight fires, to reliably flush toilets, and to meet other critical needs.”

Some 180,000 people are affected. Businesses are closed. Schools have returned to online teaching. Livestock is at risk.

Residents of Jackson were already living under a monthslong boil-water order, business as usual for the city, which is 80% Black. Their crumbling water infrastructure was imminently poised to fail, rain or shine. “It was a near certainty that Jackson would begin to fail to produce running water sometime in the next several weeks or months if something didn’t materially improve,” Reeves said in a news conference. Last year, Jackson Mayor Chokwe Antar Lumumba asked the state for $47 million to advance repairs but received about 6% of the necessary funds.

As MSNBC’s Alex Wagner brilliantly points out in her long-form reporting, the crisis has a modern origin point: October 23, 1969. Long in defiance of Brown v. Board of Education’s ruling banning segregation of public schools, the Supreme Court was forced to call Mississippi directly to account that year in the lesser-known ruling of Alexander v. Holmes County Board of Education. The text was specific: “The continued operation of racially segregated schools under the standard of ‘all deliberate speed’ is no longer constitutionally permissible.”

It was that final push that drove white parents out of the city and into segregated—and better funded—enclaves. (After, of course, packing an auditorium to air their racist grievances.) But the resulting loss of millions of tax dollars over the decades, along with political clout, has doomed Jackson to third-tier status, with the dwindling population, lack of social services, and bad health outcomes to prove it.

“Ideally, infrastructure serves as a shared foundation for economic, environmental, and public health between different neighborhoods and municipalities,” wrote scholars from the Brookings Institution after a similar crisis early last year. “However, infrastructure is often poorly maintained or intentionally overlooked in particular places, leading to a lack of access, affordability, and safety for many communities of color.”

Normally, this would be the point in my essay where I’d mention the corporate response to the current tragedy or long-term attempts at noble, reparative work. And yet, there are no Fortune 500 companies in Mississippi, nor even nearby. In fact, the major employers in Mississippi are more likely than not to be devastated by the crisis, furthering the wealth gap in the region.

This is what we mean when we talk about systemic racism; it is literal, it is longstanding, and it destroys lives and livelihoods for generations. This is why it’s important to talk about schools and community standards, this is why equitable investments and tax policy matter. This is the “why” of the work.

For the people of Jackson, Miss., what matters now is clean water.

When the bottles run dry, what’s next?

Wishing you, once again, a weekend full of unexpected relief.

Don’t skip this exceptional interview with Jessica Nordell author of the book, The End of Bias: A Beginning. It will do two things. First, it will affirm your sense that overt racism is very much your problem. “What I’ve seen over the six years that I was working on the book is an increase in extremism, white nationalism, and other overt, explicit, and quite deeply held prejudices,” she says. “If I could, I would like to write a companion book to this which looks at how we combat that kind of prejudice, because it’s a different approach than the approach to unconscious bias.” That said, unconscious bias in the workplace remains a prime threat to any inclusion program. “It has a much more negative effect on our ability to perform and do our jobs than if someone is explicitly sexist or explicitly racist,” she says. “It requires a lot of cognitive resources because there’s so much questioning and second-guessing: ‘And am I overreacting? Is this person trustworthy? Can I really believe what they said, and did they really mean to say that?’ It has a hugely negative impact on our performance. And that’s one of the reasons it’s so important to address.”
McKinsey

What is school for? This has become a more fundamental question as parents, politicians, and other stakeholders continue to use teachers, librarians, books, and curricula as battering rams in a battle for mindshare. Two powerhouse authors, Heather McGhee the author of The Sum of Us: What Racism Costs Everyone and How We Can Prosper Together, and Victor Ray, the author of On Critical Race Theory: Why It Matters & Why You Should Care, have teamed up on a powerful, full-throated defense of public schooling. They offer an example that will likely trigger opponents—the schools set up in poor Black communities in the Mississippi Delta during the 1964 Freedom Summer. “This multiracial group of volunteers made plain the distance between American reality and its ideals. As a result, these Freedom Schools made citizens.” The ramifications they share are profound. An inspiring read…unless that’s not the outcome you’re looking for.
New York Times

Southlake Texas is back in the news The idyllic Dallas-Fort Worth area community has come to personify the current culture conflict within school systems by way of a hard-hitting podcast produced by NBC. In this go-round, the school board has rejected signs offered by a parent who was testing the limits of a recently adopted Texas law that requires schools to post posters bearing the U.S. motto: In God We Trust. Sravan Krishna, a local community member, sought to donate handmade signs to the cause, but with a twist: One was painted in rainbow colors, and the other showed the motto in Arabic. At a recent school board meeting, he was told the school system had enough signs. Why is more God not good?" he replied.
NPR

Lizzo’s Tiny Desk Concert will be good for what ails ya Way back in 2019, new and established fans alike got an intimate look at the glory she exudes. The gushing intro to her mini-concert in NPR’s office is well-deserved. “In rehearsal, Lizzo belted out ‘Cuz I Love You,’ the title track from her wonderful new album, with nothing off her fastball; if you were standing six feet away at the time, you'd swear the gale force of her voice was blowing your hair back.” No lies detected. If you’ve not seen one, the Tiny Desk series is a lovely conceit, an intimate performance that takes place at a truly—in the words of Lizzo—"tiny-ass desk" in NPR’s offices. It’s amazing to see what artists do to make use of the space. Chance was a poet, Adele kept her gloves on, and Lizzo was...well, she was spectacularly Lizzo. Enjoy.
NPR

It’s always been hard to talk about race at work Reni Eddo-Lodge is a London-based writer and social justice advocate who burst into the public eye with a 2014 blog post titled “Why I’m No Longer Talking to White People about Race.” With unusual sensitivity, she explored the painful pointlessness of speaking with a white majority around an issue that they were unprepared to believe. Her only choice to save her sanity was to abandon the quest. “I can no longer engage with the gulf of an emotional disconnect that white people display when a person of colour articulates their experience. You can see their eyes shut down and harden.” A few years later, Eddo-Lodge re-published the essay and expanded on it. It’s a good reminder of why under-represented people have a justifiable wariness of inclusion efforts. “Structural racism is an impenetrably white workplace culture set by those people, where anyone who falls outside the culture must conform or face failure. ‘Structural’ is often the only way to describe what goes unnoticed—the silently raised eyebrows, the implicit biases, snap judgments made on assumptions of competency.”
The Guardian

“In 1875, under the Mississippi Plan of Southern Democrats, a political dual-pronged battle to reverse the otherwise dominant Republican trend was waged. The first step was to "persuade" the 10 to 15 percent of white voters still calling themselves Republicans to switch to the Democratic party. A combined fear of social, political, and economic ostracism convinced carpetbaggers to switch parties or flee the state. The second step of the Mississippi Plan was intimidation of the Black populace who had so recently been granted their voting rights. While economic coercion against Black sharecroppers was employed to some limited success, it was violence that played the largest part in intimidation. Groups of Democrats, called 'rifle clubs,' frequently provoked riots at Republican rallies, shooting down dozens of blacks in the ensuing conflict.”