‘Each passing day life is becoming unbearable’: How Putin’s war in Ukraine is wreaking economic havoc from Pakistan to Sri Lanka and destabilizing governments worldwide 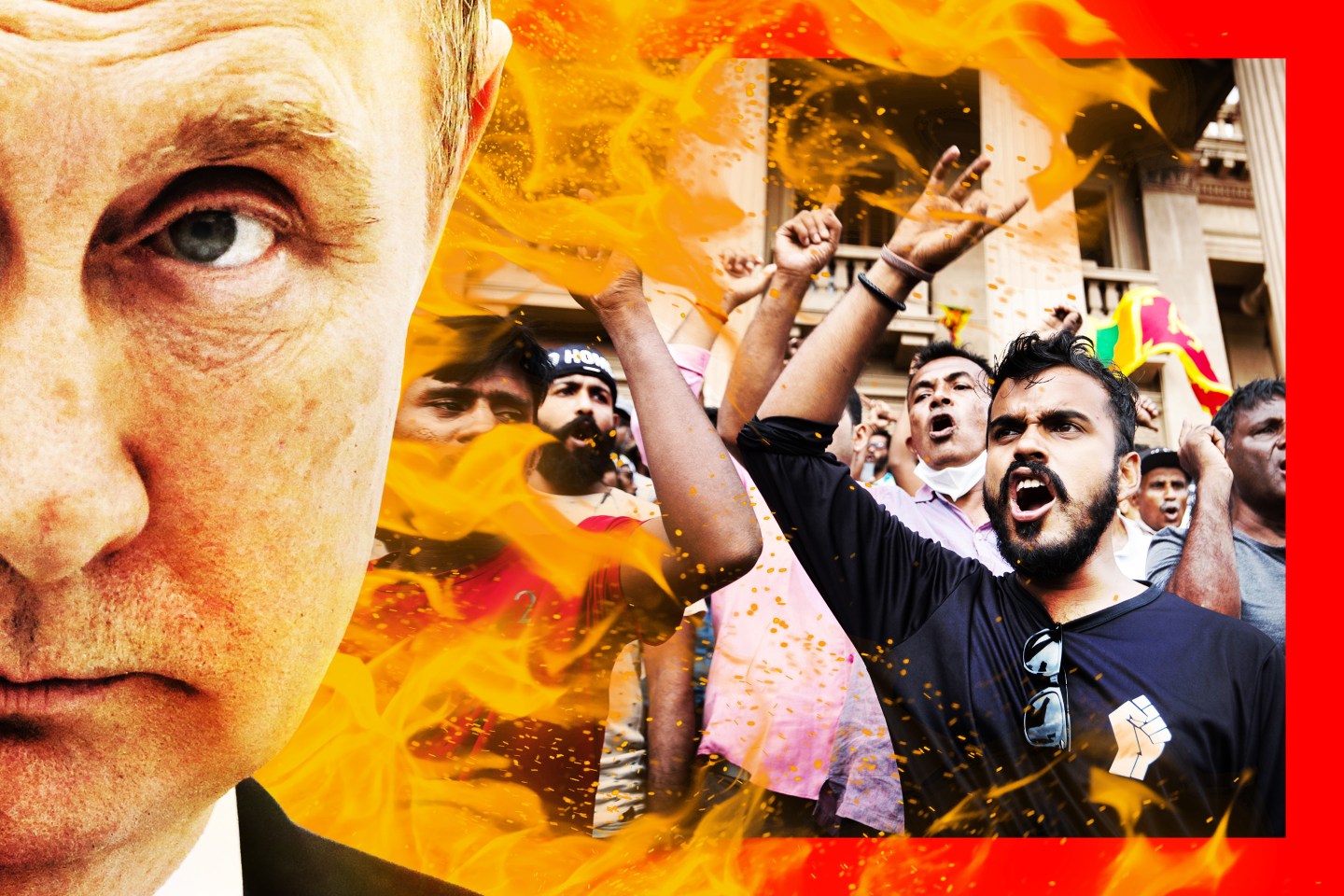 Chinthamba Gama, who runs a small business in the African country of Malawi that is involved in fish farming, raising livestock, and growing crops like maize, chilies, and beans, is more than ready for Russia’s war on Ukraine to end. “I hope that by the grace of God, something will happen,” he told Fortune.

Gama can’t afford bread for his family, since prices have shot up 100%. He now pays three times more for crop fertilizer and fish feed; labor and transportation costs have also surged.

“Each passing day, life is becoming unbearable,” he said, adding that his greatest fear is seeing his business fail and being unable to support his family.

And it’s emerging nations across Asia, Africa, and the Middle East—already hit hard by the pandemic—that are enduring the greatest pain. The economic upheavals have destabilized societies and rattled regimes—and even helped topple governments in Sri Lanka and Pakistan.

With no end in sight for the war, the worsening humanitarian crisis unfolding in developing nations has no easy solution. In many cases, lacking safety nets, the people impacted the most are having to deal with the repercussions on their own.

Sri Lanka has become a symbol of the deep crisis.

The ensuing large-scale crisis crippled the economy and toppled the government. By May, Sri Lanka defaulted on its foreign debt for the first time as food inflation soared to nearly 60%, and inflation for non-food items to almost 31% that month.

The government announced a four-day workweek to give citizens an extra day to grow food, and reintroduced fuel rationing. But the measures weren’t enough. By June, Sri Lanka only had enough fuel to power critical services like healthcare and public transport for two weeks. Businesses were paralyzed, schools couldn’t operate, and the country was running out of essential goods like medicine. Then-prime minister Ranil Wickremesinghe admitted that “our economy has completely collapsed.”

Kularuban Kulsegram, an agricultural specialist for non-governmental organization Palmera that helps rural populations, says that farmers have been unable to find fuel for their equipment, or make trips to town to access government services, like healthcare. Now “people are falling into debt again; many had to take loans to rebuild their lives again. Interest rates are nearly 30% now at the banks,” he told Fortune.

Yet Sri Lanka’s experience may not be an outlier.

The same pattern is emerging across Asia and Africa. Bangladesh is shutting schools for one day a week and slashing office hours to reduce energy use. The fuel crisis is hurting its garment sector that employs over 4 million and makes up 10% of its GDP; Bangladesh is the world’s second-largest garment exporter after China.

Pakistan, now struggling through a summer heatwave, is implementing blackouts more than 12-hours long because it lacks enough energy. Its problems stretch back to the pandemic, when prices of food and other essentials spiked.

But it was the post-war price surges alongside double digit inflation that “made [an] already bad situation worse for Pakistan,” Shahrukh Wani, an economist at the University of Oxford’s Blavatnik School of Government, told Fortune. Pakistan’s lawmakers ousted Prime Minister Imran Khan from power in April. Khan, the former cricket star, fell out of favor with the country’s military establishment, but opposition parties also took advantage of inflation and economic hardships to rally the masses against him, Wani said.

Now, Pakistan—among other emerging economies—are competing with Europe for liquified natural gas (LNG) supplies as Russia curbs gas supplies to Europe and the bloc scrambles to quit Russian energy. This means that Europe is outbidding nations in Asia and Africa to gobble up the world’s LNG at inflated prices.

“This has made the cost of LNG imports increasingly prohibitive,” Biswas, the S&P Global Market Intelligence economist, said.

Across Africa, protests are intensifying—from South Africa to Kenya to Guinea—as citizens see no respite from soaring fuel and food costs.

In landlocked Malawi, inflation rose nearly 10% last year due to the pandemic. But Malawians have become increasingly frustrated with what they say is a corrupt government that is unable to solve the country’s economic troubles.

Temwa Desi, who runs an agri-food business in Malawi, buys rice and honey from local farmers to sell across the country. Soaring fuel prices means that she can’t reach customers in certain cities, and has reduced her earnings from $391 monthly to just $117. “We are bound to shut,” she told Fortune, and, with so many people like her, it’s inevitable there will be “more jobless people in an economy that is already struggling to create employment opportunities.”

Emerging economies are now seeking help externally. But getting that support and reinvigorating hard-hit economies will be painful, if it’s possible at all.

“Many emerging markets, particularly smaller ones, are at risk of a debt crisis,” Gabriel Sterne, head of global emerging markets and strategy research at Oxford Economics, told Fortune.

Sri Lanka’s foreign exchange reserves have dwindled to $1.82 billion—a 99% drop compared to 2019—and the government owes over $50 billion to foreign creditors. The central bank expects inflation, now at 61%, to hit 70% before ultimately declining.

Sri Lanka is resting its hopes on a deal with the International Monetary Fund (IMF) to extend its credit line, which is “essential to putting the economy on a more secure footing,” Gareth Leather, senior Asia economist at research firm Capital Economics, wrote in July. Still, any IMF help will come with strings attached, and will hold back the country’s economy even after the worst of the crisis is over, he said.

Sri Lanka also needs to negotiate debt relief with China, its biggest country lender. But China thus far, has seemed unwilling to accept a ‘haircut’ on Sri Lankan debt. Such deals with creditors are required by the IMF before it can give money to the government.

Recently, cash-strapped Pakistan reached an agreement with the IMF to resume loans. But it still needs more dollars, likely from China and the Middle East, Wani says. Pakistan’s new government led by Arif Alvi, still faces a volatile situation. As Wani said, “the very measures the government has taken to stabilize the economy are feeding into political instability.”

Ultimately, the shocks from the war on Ukraine will make it even more challenging for governments, and for smaller emerging markets especially. Said Sterne, from Oxford Economics, “we are likely to see a wave of sovereign crises bigger than anything we’ve seen since the 1980s.”