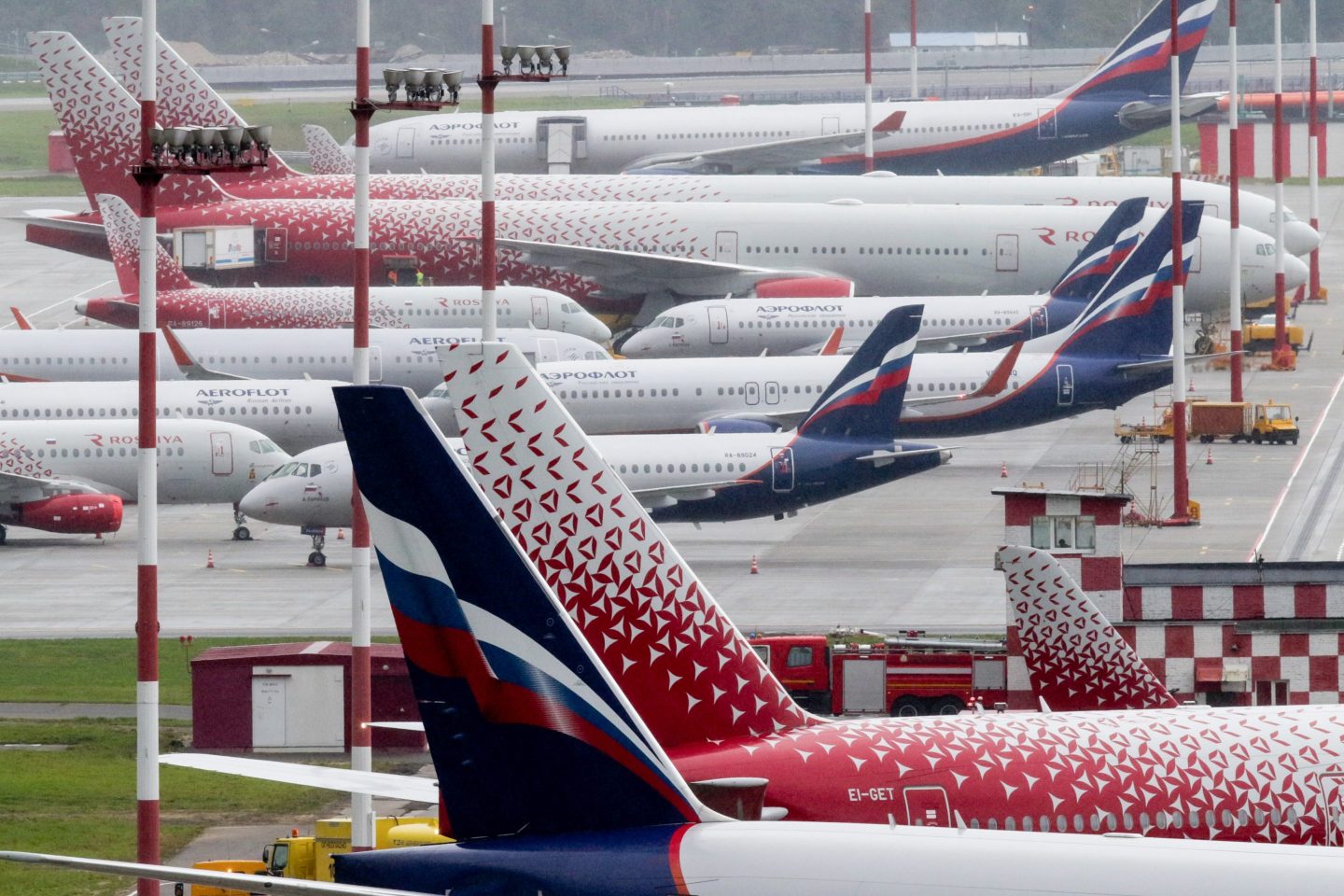 The number of Boeing and Airbus aircraft in service at Russian airlines increased significantly in the months following initial groundings in March, when Boeing and Airbus cut off all service and support to Russia.
Leonid Faerberg—SOPA Images/LightRocket/Getty Images

For the past six months, our team of 42 researchers has worked 24/7 to identify and describe, celebrate, and shame multinational companies based on their varying degrees of engagement with Russian business as President Putin’s unprovoked attack on a sovereign nation led to the slaughter of thousands of innocent civilians.

Our list, which has been viewed by 70 million people, chronicled the stampede of corporate exits from the original 12 on Feb. 24 to well over 1,000 today. Our research also showed that companies benefited from their exits, with financial markets directly rewarding firms proportionately to the magnitude of their exit. Not only was doing good consistent with doing well for these 1,000 firms, but our research also revealed that these corporate exits, coupled with governmental sanctions, have had a crushing impact on Russia’s wilting economy.

However, while implementing some bold business exits, some firms have encountered competitive disadvantages arising from unintended consequences of both sanctions policies and voluntary exits.

The challenges facing the aviation and aerospace industry exemplify some of these inadvertent disadvantages. Our proprietary company-level and industry-level data show conclusively that major U.S. airlines struggle with the unfair competitive edge of non-compliant Middle Eastern and Asian airlines in international flight distance and costs, while European aviation giants are unscrupulously leveraging divergences between the U.S. and EU’s enforcement of titanium accreditation to squeeze major U.S. aviation companies such as Boeing. Furthermore, rampant smuggling of critical jet parts into Russia has undermined compliant aviation companies while helping illicit sanctions evaders.

Of course, the aviation industry has never been easy. Disappointed with his airline investments, Warren Buffet told his shareholders in 2007, “If a farsighted capitalist had been present at Kitty Hawk, he would have done his successors a huge favor by shooting Orville down.” But clearly, based on our original research, competitive disadvantages resulting from Russian business retreats and sanctions have made it even harder for U.S. airlines and aviation giants to compete with global peers.

Some of these challenges are the result of unwitting gaps in government policies. Take the issue of titanium sourcing, for example, which is a crucial input commodity for aerospace manufacturers. Divergences between U.S. and EU titanium accreditation enforcement have inadvertently and unfairly incentivized Airbus to take Boeing’s erstwhile market share, hurting U.S. companies while undermining the spirit of sanctions.

After major regulatory and industry oversight bodies such as the National Aerospace and Defense Contractors Accreditation Program (NADCAP) suspended VSMPO, a major Russian titanium provider for commercial airplanes, Boeing suspended all titanium product purchases from Russia early in March at great cost and risk to the company. All of Boeing’s U.S. subsystem suppliers were also forced to discontinue their sourcing from VSMPO.

However, due to a technical gap in EU enforcement, Airbus has been able to continue sourcing titanium parts and forgings from VSMPO to this day under the guise of nonexistent “virtual” quality oversight, with its CEO repeatedly doubling down on the company’s continued Russian sourcing in public comments. Airbus is far from the only challenge to Boeing, as many European contractors continue to maintain their dependence on Russian titanium at levels exceeding 80%. Clearly, this is an accidental geographic divergence in regulation and oversight. It should be closed through more vigorous U.S. diplomatic efforts.

Similarly, unfair gaps in the Russian airspace embargo disadvantage major U.S. airlines which suspended all flying over Russian airspace. These U.S. airlines are now forced to re-route international flights around Russia incurring significant additional time and cost, even though Middle Eastern and Asian carriers are still inexplicably permitted to fly over Russia, including on flights that originate from the U.S. American passengers end up unknowingly funding Russia through the payment by non-U.S. carriers of tens of millions of dollars of overflight fees.

As one example from our comprehensive original flight route tracker, United’s Flight 106 from Newark (EWR) to New Delhi (DEL) now incurs an additional 600 miles and two hours of flight time relative to Air India’s identical route which overflies Russia. The passenger exodus has become so significant that both US carriers have had to cancel several U.S.-Asia routes. Clearly, there is no rational reason why foreign carriers that depart from U.S. airports should be exempt from the Russian airspace embargo disadvantaging U.S. carriers.

Other challenges reflect the need for increased enforcement of the policies that are already in place. The apparently pervasive, unchecked smuggling of critical jet parts into Russia has further undermined U.S. aviation companies while helping illicit sanctions evaders and boosting Putin’s economy. Our granular proprietary Russian aircraft tracker found that Aeroflot and S7 inexplicably increased the number of in-service Boeing and Airbus aircraft significantly in the months following initial groundings in March, even though both companies cut off all service and support to Russia, took steps to ensure that end users are not Russian, and have issued repeated warnings that those outdated, un-maintained Russian aircraft are not safe for operation.

The magnitude of the resurgence in Russian flight volumes–with the number of in-service aircraft exceeding even pre-war levels by upwards of 20% across Aeroflot, S7, and Pobeda–cannot be explained by cannibalization of parts alone, suggesting stronger sanctions enforcement is necessary to ensure sanctions evaders are not thwarting the efforts of compliant U.S. companies.

These problems can be corrected with more consistency and transparency. Non-U.S. carriers that depart from U.S. airports should not be overflying Russia, and American passengers of these non-compliant airlines should not be unwittingly funding the evasion of the economic blockade of Russian airspace. And greater transparency in the aircraft manufacturing supply chain can reveal the surge of demand in countries covertly allowing aviation parts smuggling.

But even more broadly, our original research suggests that government policymakers need to work hand-in-hand with top industry leaders to correct unintended competitive disadvantages for U.S. businesses. Leveling the playing field ensures American businesses are not penalized for doing the right thing by exiting Russia after Putin’s invasion of Ukraine.