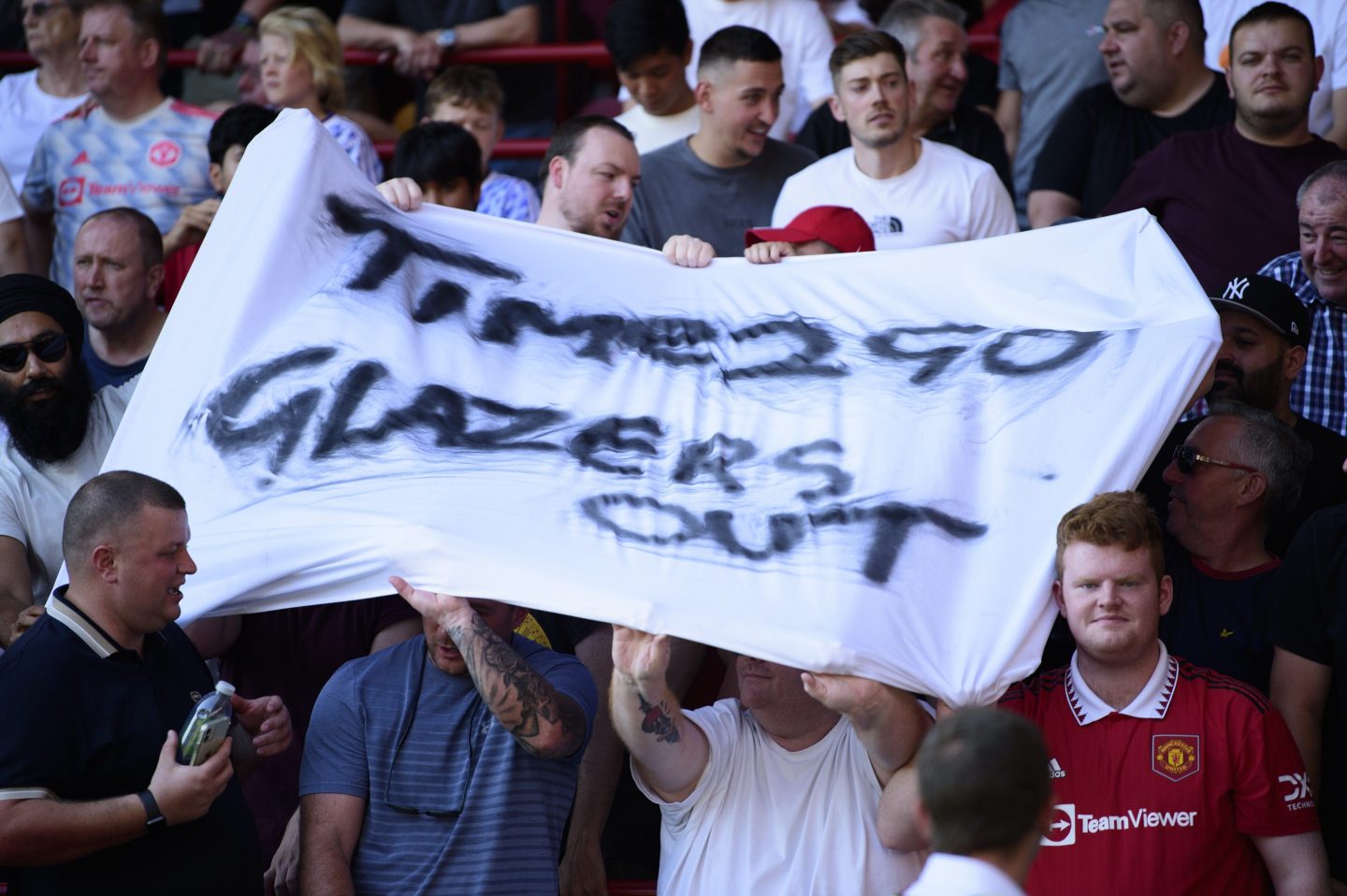 The Glazer family would consider selling a minority stake in Manchester United FC, people familiar with the matter said, as pressure mounts on their ownership of the historic English football club.

The owners have held some preliminary discussions about the possibility of bringing in a new investor, the people said, asking not to be identified because the information is confidential. The American Glazer family is not yet ready to cede control of Manchester United, which could be valued at about £5 billion ($6 billion), the people said.

Discussions are ongoing and there’s no certainty the Glazers will decide to sell a stake in the club, according to the people. A representative for Manchester United and the Glazer family declined to comment.

Shares in Manchester United rose as much as 7.6% in early trading in New York on Wednesday. The stock was up 4% at 9:38 a.m, giving the company an equity market value of $2.2 billion.

Manchester United is one of the best-known and most successful clubs in world football. It has won a record 13 English Premier League titles and has consistently been able to attract the game’s biggest stars, including the likes of Cristiano Ronaldo, Paul Pogba and Zlatan Ibrahimovic.

The club would likely attract a host of big-name investors, similar to EPL team Chelsea FC, which was recently sold to American billionaire Todd Boehly and private equity firm Clearlake Capital in a £4.25 billion deal. Such is the global reach of Manchester United that Tesla Inc. Chief Executive Officer Elon Musk tweeted he was buying the club earlier on Wednesday, before clarifying he was joking.

The late Malcolm Glazer bought the club in a 2005 leveraged buyout that saddled it with massive debts and the family has faced distrust from hardcore supporters ever since. While this was mitigated in the early years of their ownership as the team continued to win trophies under Sir Alex Ferguson, resentment has grown steadily after the legendary coach’s retirement in 2013. Since then, the club has cycled through managers and big-money players with only a handful of trophies to show for it.

To make matters worse, their dominance of English football has shifted to crosstown rivals Manchester City FC, which has won multiple honors since being taken over by Abu Dhabi investors in 2008.

A perceived lack of investment in Manchester United’s infrastructure, including its Carrington training ground and famous Old Trafford stadium, and frustration over poor recruitment strategy have compounded the ill will toward the Glazers.

Avram Glazer and Joel Glazer are executive co-chairmen and directors at Manchester United, while family members Kevin Glazer, Bryan Glazer, Darcie Glazer Kassewitz and Edward Glazer all sit on the board, according to the club’s website.

Fan tensions have boiled over in recent weeks, with Manchester United losing the first two games of the new EPL season, including a 4-0 drubbing by Brentford FC. At the opening home match of the new campaign—a 2-1 loss to Brighton & Hove Albion FC—a large group of devotees walked toward the stadium with banners that read: “Fight greed. Fight for United. Fight Glazers” and “We want our club back,” the Telegraph newspaper reported.

Supporters are planning to stage fresh protests at the team’s next home match against arch rivals Liverpool FC on Aug. 22. Liverpool won the corresponding fixture 5-0 last season and are the bookmakers’ favorite this time around.

Manchester United was floated on the New York Stock Exchange in 2012.