Colorado will no longer charge sales tax on diapers and menstrual products. Here are other states with similar tax breaks 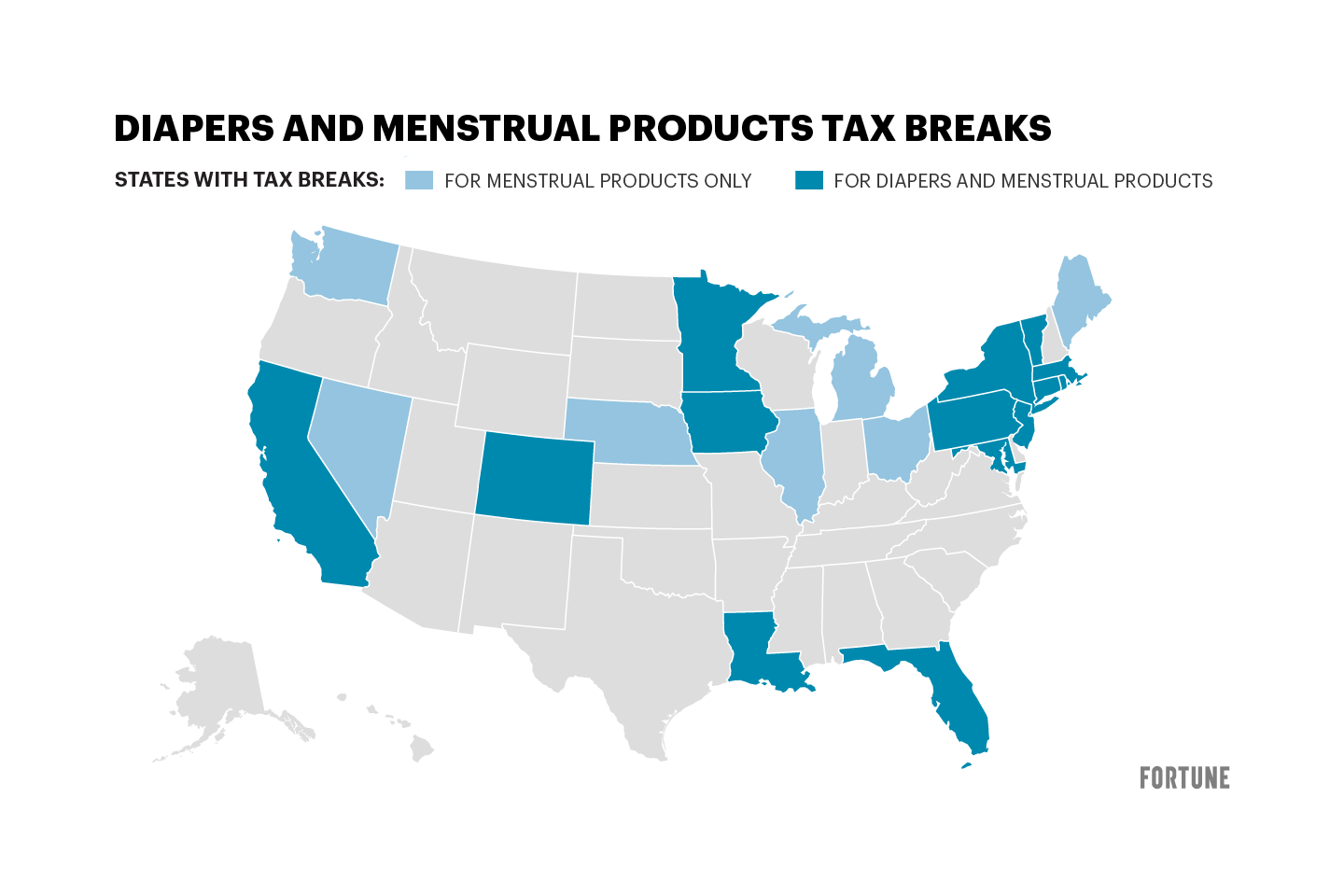 Colorado is the latest state to announce it will get rid of its sales tax on diapers and menstrual products starting Wednesday.

The tax break went into effect after Colorado Gov. Jared Polis moved up its start date, which was originally slated for 2023. The governor signed the exemption into law earlier this summer as part of his challenge to save state residents money in 100 ways.

The change is expected to save Coloradans $9 million a year by making adult and baby diapers, tampons, pads, menstrual cups, sponges, sanitary napkins, and panty liners tax-free. Families spend around $15 a month on period products for each person who needs them, and diapers cost even more, at $80 a month per child, according to the Women’s Foundation of Colorado.

As a general rule, the U.S. does not apply sales tax to necessities such as food and prescription medications. And many states removed the sales tax on products from ChapStick to dandruff shampoo before considering the same for tampons and sanitary pads. That’s because menstrual products and diapers are considered “luxury necessities” under certain state tax codes. As such, they face tax rates similar to that of makeup or electronics, according to advocacy groups Baby2Baby and the Alliance for Period Supplies.

In recent years, though, efforts have ramped up calling for menstrual products and diapers to receive exemptions like other health items. By 2018, 10 states had freed consumers from paying sales tax for tampons and sanitary pads. As of this July, 22 states and Washington, D.C., have stopped charging sales tax on period products, according to the alliance. Only 15 states and D.C. exempt diapers from taxes, the National Diaper Bank Network reported in June.

The movement to end taxes on sanitary products has picked up momentum because of recent decades-high inflation, which has made these items even more expensive to access. Over the past year, disposable diaper prices have surged 20%, according to data from analytics firm NielsenIQ, reported by CBS News. A box of tampons cost 9.8% more in May compared with the beginning of this year, while a package of pads cost 8.3% more on average, NielsenIQ data shows.

Here are where the states stand with tax breaks for menstrual products and diapers:

Seven states have removed their sales tax for only period products:

Ohio also grants a temporary exemption for diapers during its sales tax holiday that has happened each year in August since 2019. In 2021, Washington’s state legislature considered a bill that would exclude diapers from a sales tax and reintroduced it again this year.

States with tax breaks for diapers

Indiana is currently the sole state that exempts children’s diapers but not period products from its sales tax as part of a law signed this week by its governor.

States with tax breaks for diapers and menstrual products

Just over a dozen states do not tax both diapers and menstrual products. Some of those exemptions happened because states considered these items medical equipment, such as Maryland, or health products, such as Massachusetts and Minnesota.

Other states don’t have such clear-cut distinctions about their tax breaks. They might have seasonal tax holidays, which include diapers among the eligible items. A handful of states also do away with sales tax altogether, though local municipalities may have their own rules.

Starting in 2020, Virginia lowered the tax rate on diapers and menstrual products by more than half, from 5.3% to 1.5%. The state has not made additional moves toward a total tax exemption, but the reduced rate is one of the lowest in the country and equivalent to the tax Virginia applies to food.

States with tax breaks for diapers during sales tax holidays

Several states, mostly in the South, offer sales tax holidays for a weekend in the summer as families prepare to shell out for back-to-school expenses. During these weekends, stores waive the sales tax to help residents cut back a little on the cost of clothing, office supplies, electronics, and more. Diapers often get included under the category of clothing and qualify for the seasonal tax break, too.

States with no tax break

And these states still impose taxes on diapers and menstrual products, according to the National Diaper Bank Network and the Alliance for Period Supplies. A couple proposed bills in an attempt to change their policies, including Wyoming, Kansas, and Ohio. Most of those attempts, however, have either stalled in the legislature or failed. Wisconsin in the past has held seasonal sales tax holidays, where diapers were exempted, but didn’t have one in 2022.

North Dakota grants an exemption only for adult incontinence products, though it still taxes menstrual products and baby diapers.