Remote work ate your vacation. ‘The lines between work and life have become increasingly blurred’ 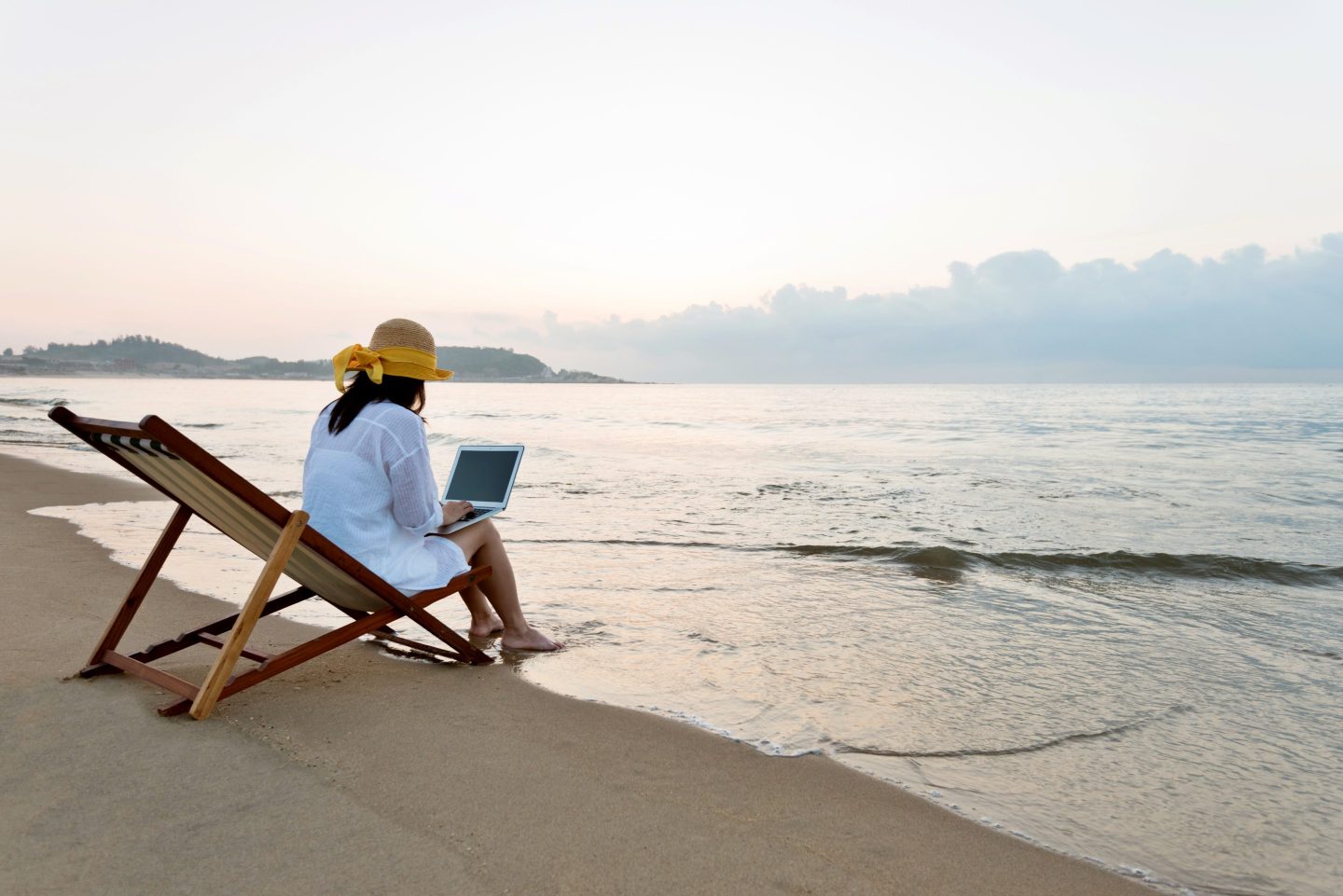 Roughly half of American employees said they work about one hour a day while on vacation, according to a report from Qualtrics.
Baona—Getty Images

Last month, Stephanie Sanders was on a beach in the Outer Banks on a family girls’ trip with her mother, grandmother, and niece, but not even the cresting waves of the Atlantic Ocean could wash work from her mind.

She blocked out two hours on two mornings of the vacation to take a few client calls and comb through emails and Slack messages with her team.

“I caught a little flack for working on my vacation,” Sanders wrote in a post on LinkedIn. She told Fortune during a subsequent interview that her boss lightly chided her for not taking the full time off for herself. Sanders says those four hours working when she was supposed to be off made her feel less anxious about what she might be missing at work, and helped lessen the onslaught of post-vacation tasks and emails to catch up on.

“It made getting back into the groove much more manageable and less daunting,” Sanders says.

She’s  far from alone. A recent report from Qualtrics, a customer experience software company, finds that roughly half of American employees said they work about one hour a day when on vacation.

Most knowledge workers can work anywhere with a laptop and a wi-fi connection, and that’s exactly what they’re doing. But when does work stop?

Since many of us stopped going to the office in March 2020, work has become an ever-present specter in our homes, and now even when we (try to) go on vacation.

The truly unplugged vacation is becoming a thing of the past.

Why it’s hard to disconnect

The fear of falling behind at work is one of the top reasons employees give for either working while on vacation, or not taking vacation at all, according to Qualtrics.

We’re in peak summer right now: The majority of Americans slate summer travels for July and August. Already sleepy offices are quieter than ever. But many Americans say their managers and colleagues expect them to check in while they’re away. More than 30% of respondents to the Qualtrics survey said they’re even expected to answer phone calls or texts while on vacation, 27% are expected to respond to emails, and 20% are expected to be online.

The lines of work and vacation are no longer clear. When you can and have been working from anywhere, where are you ever off the clock? What’s to stop a boss or colleague from pushing the boundaries, sending that “urgent” email while you’re on vacation?

Sanders runs North American sales for Denmark-based Contractbook, which affords her unlimited paid time off. Generally, she says, she has the freedom and flexibility to travel and work from anywhere. When we spoke, she was on her way to Maine, but not for vacation. She said she just wanted a change of scenery while taking meetings and doing her work, but in general she finds herself working more and taking time off less.

Even with unlimited vacation days, work is always lingering. “Maybe if I felt like it was one of those precious 20 or so days a year off I got [without unlimited vacation], I’d be less inclined to work while on vacation,” Sanders says.

There’s a pervasive narrative that employees abuse unlimited PTO, but it’s much more common for employees to take far less time off than they would if they had the typical two weeks’ paid vacation time, according to the Society for Human Resource Management.

Working on vacation can be toxic. After all, it doesn’t allow proper time to rest and recharge. And employees who work while on vacation are more likely to quit, according to a survey by business analytics firm Visier. About 20% of respondents said they quit after returning from vacation, and nearly half thought about it.

“In an era of worker burnout and high turnover, 58% of U.S. workers say their job is the main source of their mental health challenges,” the Qualtrics report reads. “It can be difficult to completely disconnect, especially as the lines between work and life have become increasingly blurred due to remote and hybrid work arrangements.”

And, at least for me, soft work—the constantly thinking, worrying, or doing work in you head if not physically answering emails and conducting meetings—can be just as time-consuming and tiring on vacation.

Sanders argues that for her, taking some time to work from vacation is just the way she works best. One individual commented on her LinkedIn post, saying they work about two hours per vacation day. Someone else said if they’re taking a long weekend, they’ll still check email and respond, but they take two full weeks off a year where they try to completely unplug—which leaves them every time with a few days of catching up when they’re back.

Sanders says it’s also up to her and other managers to set an example and make sure employees know that whatever way they need to take time off is okay.

“You have to encourage people to do whatever they want. If they want to fully unplug, that’s okay,” Sanders says. “We’ve been used to working one way for so long, but it’s going to change…people just need to know the expectations.”You have to show people that just because you can work, doesn’t mean you need to.”