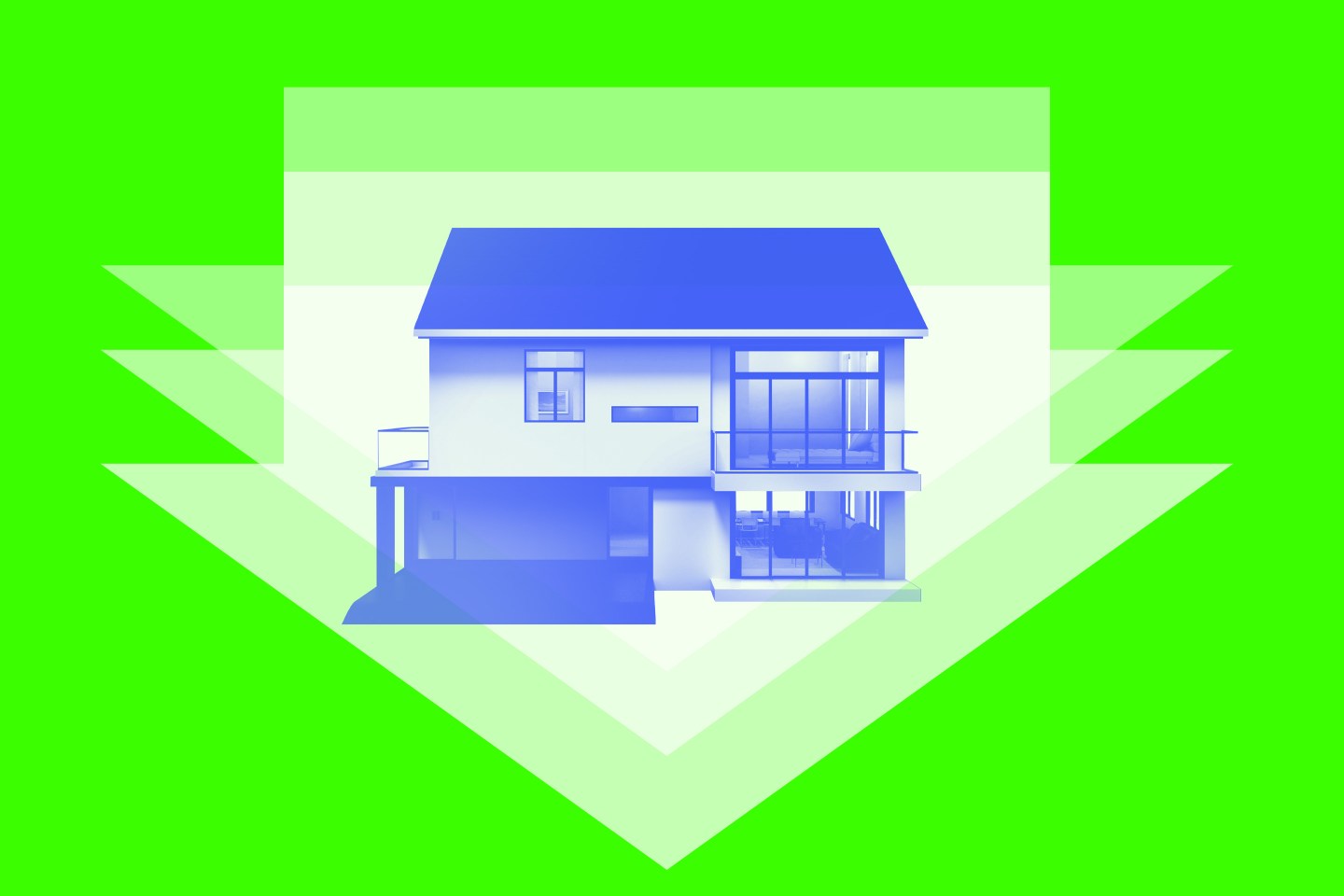 It’s finally happening. After soaring 40% from pre-pandemic levels in the greatest boom in decades, home prices peaked in June, and started falling in July. That’s the stunning, sudden shift revealed in a new set of data just introduced by the American Enterprise Institute’s Housing Center, one of the top sources for in-depth, city-by-city numbers on all things housing, from appreciation to inventories and mortgage originations. “The market just reached a turning point,” says Ed Pinto, the AEI Housing Center’s director. “Prices will keep falling on a national basis for August through December. It’s likely that we’ll see declines in around four out of five metros in some of the months ahead.”

Until now, the AEI had measured prices primarily on a year over year format. And by that yardstick, housing still looked strong in June. That month, the AEI found that the value of the average home had grown by 15% from June of 2021. But its data also showed over the 12-month span, “home price appreciation,” or HPA, was slowing fast, down substantially from a summit of 17.5% in April. The question that pullback posed for America’s homeowners: What’s happening right now, week by week or month by month? Is it possible that in my city, in Atlanta or Phoenix or Raleigh, prices are actually staring to decline?

The AEI’s new data answers that query. The measure displays price changes from one month to the next. Hence, the numbers provide an up-close view of precisely when the patterns turn, by how much, and what the moves foreshadow. They’re a guide to reading the market’s pulse. The AEI’s figures are based on actual closings for the month, as reported in the public records. Pinto deploys a methodology that compares sales of similar quality homes, eliminating distortions from shifts in the sales “mix”––for example, a deceptive boost to average prices as a higher share of pricey homes sell in June than in May.

An astounding number of markets are already posting declines

The AEI calculated the figures for the the nation’s 50 most active housing housing markets. The AEI’s table, “Home Price Appreciation (Month over Month),” shows the changes from one month to the next from the start of 2019 through June of this year. Let’s begin with the national data. The overall market has been on such a relentless rampage, for so long, that only twice in that period have prices retreated, and each time by just 0.1%. As recently as January, the America’s monthly HPA was a 2.6%, sliding in May to a still robust 1.1%. But in June, appreciation hit a virtual freefall, shrinking to just 0.2%.

Behind that national downshift are astounding reversals in sundry cities that were thriving just months ago. In June of 2021, only four metros showed a fall in prices from May and last year, the only May-to-June loser was Louisville at a tiny -0.1%. In April, not a single one of the fifty metros endured a decline from March. But this June, no fewer than 21 locales suffered drops from their May prices, some of them big. In general, the steepest falls came in the expensive west coast markets, as well as western metros that gained legions of buyers from the exodus from California. Eleven of the hardest-hit addresses fit this category. The biggest loser was San Francisco at -3.8%, followed by San Jose (-3.2%). Among the other western cities logging large declines are Seattle (-1.8%), Los Angeles (-1.5%), Portland (-1.3%), Denver (-0.9%) and Phoenix (-0.6%). Almost all of these metros were rocking as recently as February, with San Francisco up 2.8% over January, San Jose ahead 3.9%, and Seattle gaining 3.5%.

“The clearest trend is the pullback in these west coast cities, and those influenced by the California craziness,” says Pinto. In these places, the giant price increases in the last two years, from already expensive levels, has so diminished affordability that the fast-shrinking ranks of buyers are hammering values in spite of historically low volumes of homes for sale. From the fourth quarter of 2019 to Q1 of this year, prices jumped in from $1.2 to $1.6 million in San Joe, $575,000 to $819,000 in Seattle, from $466 to $623,000 in Denver, and from $340,000 to $516,000 in Phoenix. The only out West markets that still showed strength were Las Vegas, a venue that’s cooling but still managed a 0.2% increase over May, and Boise, where prices waxed 1.8%, maintaining a record of consistent, month over month advances. Boise keeps thriving as a favorite destination for work-at-home refugees from California who can sell a home in say, San Jose, get a much bigger abode at half the cost in their adopted city, and still bank hundreds of thousands of dollars.

In recent months, the hottest markets have clustered in the sunshine state. Cape Coral, which was scoring year over years increases in the mid-30% range, is backpedaling fast (you can read my recent feature on Cape Coral’s market here). Its gain of 2.8% from April to May flip-flopped to a negative 1.0% in June. Tampa, North Port, Orlando, Jacksonville and Miami are all way down from February increases, but still advanced between 0.2% and 1.1%.

By contrast, a number of older metros that didn’t experience big price gains demonstrated remarkable resilience, for a simple reason: Many remain relatively cheap. St. Louis, Nashville, Boston, Providence, Philadelphia, Kansas City, Columbus and New York all ranked in the top ten for May to June gains. Tied for first place with Boise the Big Apple, which garnered a month over month increase of 1.8% and is one of few stalwarts that appear on a rising trajectory.

Pinto also gets a good look at where prices are headed by studying “rate lock” data from Optimal Blue. Those numbers reflect contract prices for sales that will close in around 45 days. For Pinto, the rate lock trend points to falling prices, at the national level, for July through December of 2022. “We expect the national month over month HPA to go negative in July for the first time in years,” he says. “From there, prices should fall 3% to 5% from June levels by year end. Those total increases will accumulate gradually over the seven months from June to December.” By year end, Pinto expects that homes prices will still be 4% to 6% above December of 2021, but probably remain on a downward path.

Pinto forecasts that if overall prices slide by around 4% from here to year end, a far larger number of metros than the 21 that were negative in June will be soon posting falling prices from month to month. “I wouldn’t be surprised if some months, we see 40 cities showing declines,” he says.

So where does Pinto see values heading in 2023? It would seem that if prices are falling in December, they’d keep tumbling through most of 2023. But that’s not necessarily the most likely scenario, says Pinto. “We’ve seen a decline in mortgage rates in recent weeks from 6% to around 5.5%,” says Pinto. “If rates rates continue to recede, that would give a boost to appreciation.” He points out that although inventories are growing, stocks remain extremely slim. “We’re still at around one month of supply at the current level of demand,” he says. “To get declining prices, we’d need to see seven ‘months of supply,’ and that could be a long way off.” For Pinto, it’s highly possible that a combination of stable or falling rates, and limited volumes of homes for sale, could sustain gains of 4% to 6% next year.

Still, Pinto says it’s never been more difficult to predict housing future. “There are so many factors pushing and pulling in different directions,” he says. “My crystal ball is getting foggier.” The AEI’s new monthly numbers enable homeowners to watch the market’s course, not just over long spans, but as it evolves. Folks are super-anxious about what today’s tumultuous times mean for the future of their biggest asset. They want to see whether the value of their ranch of colonial waxed or waned in the last 30 days. Now they can. The AEI numbers don’t hand homeowners a a crystal ball. But following the AEI’s fresh data will keep your thumb flush on the market’s pulse of the market that, for most Americans, counts more any other by far.