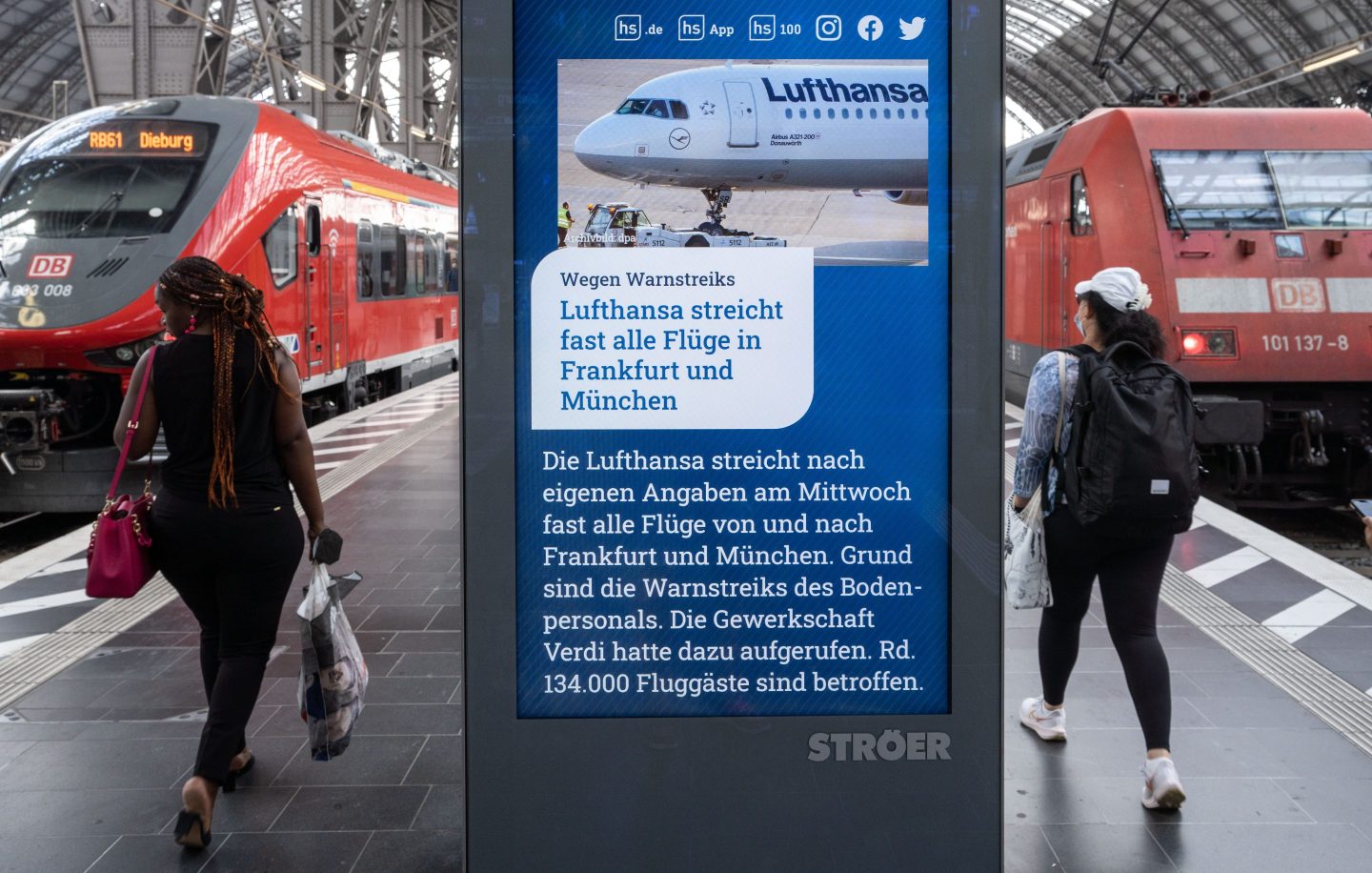 Rail passengers walk past an information screen in Frankfurt's main train station that reads "Lufthansa cancels almost all flights in Frankfurt and Munich" as a message.
Frank Rumpenhorst—picture alliance/Getty Images

Lufthansa has been forced to cancel over 1,000 flights that were scheduled to take place Wednesday, due to a looming strike by its German ground staff.

The move knocked more than 2% off Lufthansa’s share price.

The Verdi union announced the industrial action on Monday, asking passengers for their understanding and blaming “mismanagement” for the one-day strike, which will affect around 134,000 would-be travelers.

The biggest impact will be felt at Lufthansa’s Frankfurt and Munich hubs, but the strike will also affect services at Berlin, Bremen, Cologne, Düsseldorf, Hamburg, Hanover, and Stuttgart’s airports.

Around 20,000 Lufthansa employees are collectively negotiating pay increases, and their union representatives—who say ground workers are being heavily overburdened due to the staff shortages that have largely caused this summer’s travel fiasco—are not happy with management’s mid-July offer.

German inflation is currently running at over 7%. Lufthansa’s offer would see monthly basic pay increased by 250 euros ($253) over the next year; the flag carrier says this would amount to a 9%–11% pay increase for its lower-paid workers. But Verdi wants to see a 9.5% pay boost, or at least 350 euros a month, across the workforce.

“They urgently need more money and they need relief—for themselves and for the passengers,” said Verdi deputy chair Christine Behle, who added that Lufthansa’s promise of an extra 2% increase in July 2023, “depending on how our business develops,” left employees with an uncertain future.

Lufthansa described the union’s stance as “incomprehensible,” with human resources chief Michael Niggemann saying the one-day stoppage “represents a renewed, substantial, and unnecessary burden for our passengers and also for our employees beyond the strike day.”

Negotiations are set to resume early next month, and Verdi has described Wednesday’s action as a warning strike designed to pressure Lufthansa into showing up with a “significantly improved, final offer.”

Niggemann said the walkout “can hardly be called a warning strike due to its breadth across all locations and its duration.” Fortune has asked Verdi for its response, and will update this story when one appears.

Like many other airlines, Lufthansa has already had to cancel many flights in recent weeks due to understaffing on the ground, which is mostly the result of high sickness absence rates.

In mid-July, Frankfurt Airport followed the U.K.’s Heathrow and Gatwick and the Netherlands’ Schiphol in limiting capacity so carriers have a chance at stabilizing their schedules. Lufthansa reacted gratefully to that move.

Lufthansa is far from being the only European airline with strike problems this summer.

The Irish low-cost carrier Ryanair has been hit with ongoing industrial action that has led it to cancel hundreds of flights.

British rival EasyJet has also suffered repeated strikes, and disagreements over how to handle the crisis led its chief operating officer Peter Bellew to resign at the start of this month.

Last week, the Scandinavian carrier SAS ended a 15-day pilots’ strike with a new collective-bargaining agreement that saw the reinstatement of 450 pilots who were let go during the pandemic.

British Airways—which is particularly badly affected by the Heathrow cap—narrowly averted a walkout of check-in staff earlier this month when management caved in to pay demands, agreeing to boost salaries by nearly 10%.