Employees are living—and working—longer. CEOs are introducing initiatives like phased retirements to harness the ‘longevity economy’ 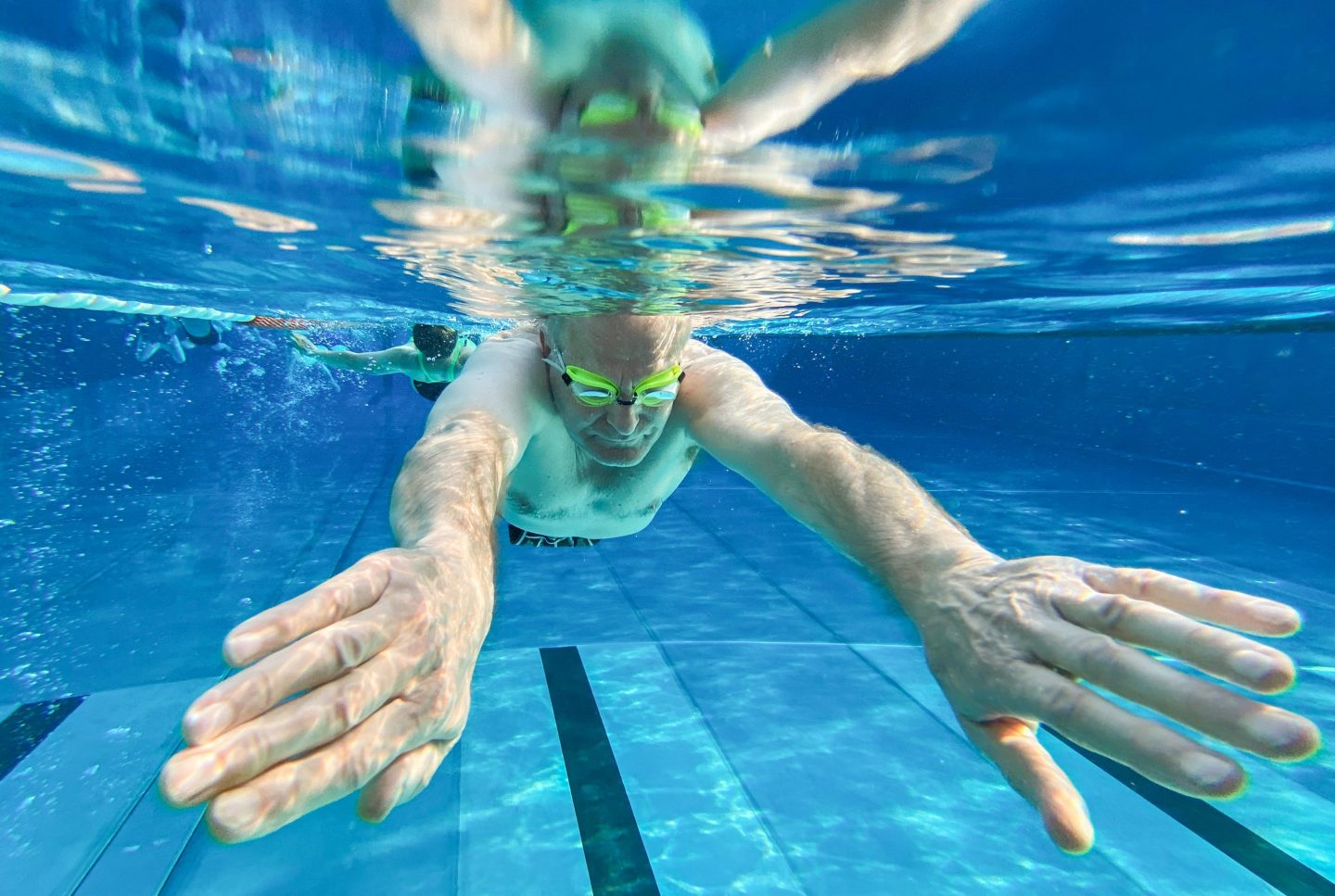 77-year-old Günther Bolte swims in the early morning in the outdoor pool Funbad Wedemark, in Lower Saxony, in Germany. With people living 30 and 40 years beyond their retirement age, society will need to adapt to this new longevity phenomenon, experts say.
Julian Stratenschulte—dpa/Getty Images

Consider this statistic about human longevity: 50% of 5-year-olds who live in the richest economies on the planet—places like the United States or France or Japan—can now expect to live to the ripe old age of 100.

Welcome to the era of the super-agers. Life expectancy in much of the developed world more than doubled last century. And, thanks to advances in medicine, public education and sanitation, human longevity will continue to blossom in the years ahead, demographers say, extending life for many of us into the triple-digit range. Maybe we won’t need billionaires like Jeff Bezos, Peter Thiel or Larry Page to fund some kind of fountain of youth breakthrough after all.

The glass-half-empty take is a bit harder to swallow. People are regularly living 30 and 40 years beyond their retirement age at a time when birth rates are in decline. These defining and conflicting demographic trends lead to all kinds of concerns that privately- and nationally-funded pension systems, created in an age when life expectancy wasn’t quite so rosy, will fall short of their promise to fully support us once we say goodbye to our careers. The age-old challenge of keeping publicly-funded retirement plans solvent boils down to the question: can society maintain a sufficient population of working-aged people to pay into a national pension plan, thus funding the monthly payouts to retirees?

In May, a survey of pension fund managers from the United Kingdom bore out fears of a looming demographic time bomb tick, tick, ticking. Asked about the biggest threat to their funds’ performance, the fund manager’s No. 1 response was inflation. The second most cited concern? Longevity, or people living too long.

This kind of Malthusian thinking is corrosively misplaced, a growing contingent of retirement experts, economists, and researchers say. With people living longer and healthier lives, they counter, business leaders should nurture this phenomenon, and harness its potential—for both the demographic on the brink of retirement and their younger cohorts.

“This crisis mindset assumes that people will age in the future as they did in the past, that financing 100-year lives is a challenge made insurmountable by the projected insolvency of the Social Security trust fund, and that additional mechanisms for saving, investing, and supplementing income are beyond reach,” argued an influential white paper published last year by the Stanford Center on Longevity, a research collective founded by Stanford University professor Laura Carstensen, one of the foremost experts in aging and longevity. “This static view of what it means to age distorts our perspectives about longevity in the future, and overlooks the opportunity to change the trajectory of aging and associated costs, by starting now to redesign institutions, practices, and norms so that they align with today’s reality, rather than last century’s.”

In the before times, back in 2018, the Stanford Center on Longevity started to work on this “redesign” challenge. For example, it developed what it calls “a new map of life,” a kind of framework for policymakers that sought to advance the longevity discussion towards the many benefits the white-haired population can bring to businesses and society at large. “In place of the outdated assumption that older adults drag down productivity and drain societal resources, we take a forward-facing perspective on the economic potential of a more age-diverse population in which older adults contribute in increasingly significant and measurable ways to the social good and to GDP.”

Out is talk of the above-60 crowd as a burden on the public purse. In is a newfound understanding and appreciation for what’s being called “the longevity economy.”

In May, in Davos, Switzerland, the World Economic Forum convened a series of high-level discussions about how to harness and capitalize on the longevity economy. The focus was two-pronged: how to support the financial, physical, and mental wellbeing of the soon-to-retire crowd, and how to better leverage their experience and career wisdom for the benefit of their younger colleagues. “It was a really outstanding discussion,” Haleh Nazeri from the World Economic Forum, who was part of the team organizing the longevity track, told Fortune.

Nazeri, whose work at WEF focuses on longevity and financial wellbeing, has been talking with business leaders and policymakers for the years about the need to rethink retirement systems. In an era of super agers, she says, corporations and governments need to adapt. For starters, the “one-size-fits-all retirement plans of the past, where money is saved up to be spent in the later years of life, is neither feasible nor practical,” she’s argued.

Instead, she offers a few ways today’s leaders should be thinking about getting the most out of aging workforces, and how to support employees’ transition to a new life once their careers wind down.

For starters, employers should accommodate workers by building in so-called “on-ramps” and “off-ramps” throughout their working life. “It’s kind of an elegant way to say people might need breaks throughout their careers,” she says. An employee may need a career hiatus to start a family, for example, or care for an elderly or sick loved one, or take a sabbatical to pursue an area of interest outside of work.

These off-ramps should be supported, and even encouraged by managers, she argues. And, when it’s time for a worker to come back, an “on-ramp” is needed to smooth out the transition. Many companies are beginning to see the need to allow for career pauses, which may ultimately push the standard retirement age for some workers well into their late 60s and beyond. Prudential Singapore, for example, recently scrapped its retirement age entirely to create a more “age-friendly workplace” and build in some flexibility for staffers who want to pad their pension nest-egg.

Plus, giving workers the space they need in their pre-retirement years could prove fruitful down the road. Nazeri gives the example of the worker who decides to take a sabbatical mid-career. The experience, she notes, may prove life-changing, opening up opportunities for the worker after she retires.

When it comes to retirement, some employees may find the prospect of leaving a secure career a major jolt. That’s why an organizational plan is needed. One suggestion that came up repeatedly at Davos was the need for phased retirements, Nazeri said. In a phased retirement program, senior staffers, those at or nearing the end of their careers, would begin transitioning to two- or three-day work weeks, she adds, “instead of just retiring one day—you hit 65, and that person’s gone.”

Executed well, the phased retirement would be minimally disruptive—to the employee, and to her colleagues. It would allow the company to continue to reap the social benefits—think experienced workers mentoring and on-ramping younger staff—of an inter-generational workforce. At the same time, the expectant retiree could maintain both a steady paycheck and hold onto that close bond she has with co-workers. “Community is one of the more important things—as people retire and leave their jobs, they lose that [sense of community], you know, and it can lead to all sorts of things like depression in older age,” Nazeri notes.

Nazeri fully acknowledges that COVID has probably inalterably messed with office life and the workplace atmosphere we used to share with our colleagues. But she also sees how the new way of working could make phased retirement scheduling more palatable to managers. After all, the onset of hybrid working, where some of us come into the office two or three days a week, “is not an unusual decision anymore,” she says.

The longevity discussion is also pushing companies and policymakers to confront the problem of inadequate pensions, particularly in an age of runaway inflation.

In the same survey, Mercer found that 84% of the employees it polled said they plan to work as long as they can for fear their pension is too meager to support them. This problem is particularly acute with women who continue to earn less than men, and therefore have accrued less savings. The focus on earnings shortcomings has given rise to the discussion about “living pensions.” Like a living wage, a pension should be designed equitably so that workers can actually live off of it.

One organization pushing companies to make employee compensation more generous and fairer is the British non-profit the Living Wage Foundation. Each November, it calculates “a real living wage,” one based on the cost of living. It challenges employers to adjust salaries according to this annual calculation. So far, scores of companies have signed on to the pledge, including KPMG, Aviva, Burberry, Nestlè and Ikea.

One participant, Aviva, believes the living wage approach could be applied to pensions as well. The idea would be to adjust retirees’ payouts annually so as to ensure their real pension doesn’t get clobbered by inflation.

Aviva calls the living pension “a game-changer,” particularly for women and low-income earners.

Nazeri, for one, applauds the recent flow of ideas to tackle the pension puzzle. Solving it starts with seeing pensioners and the soon-to-retire crowd as an asset to an organization, and to society.

“I feel like we need to discuss this even more,” she says, “because it’s going to impact the entire world.”