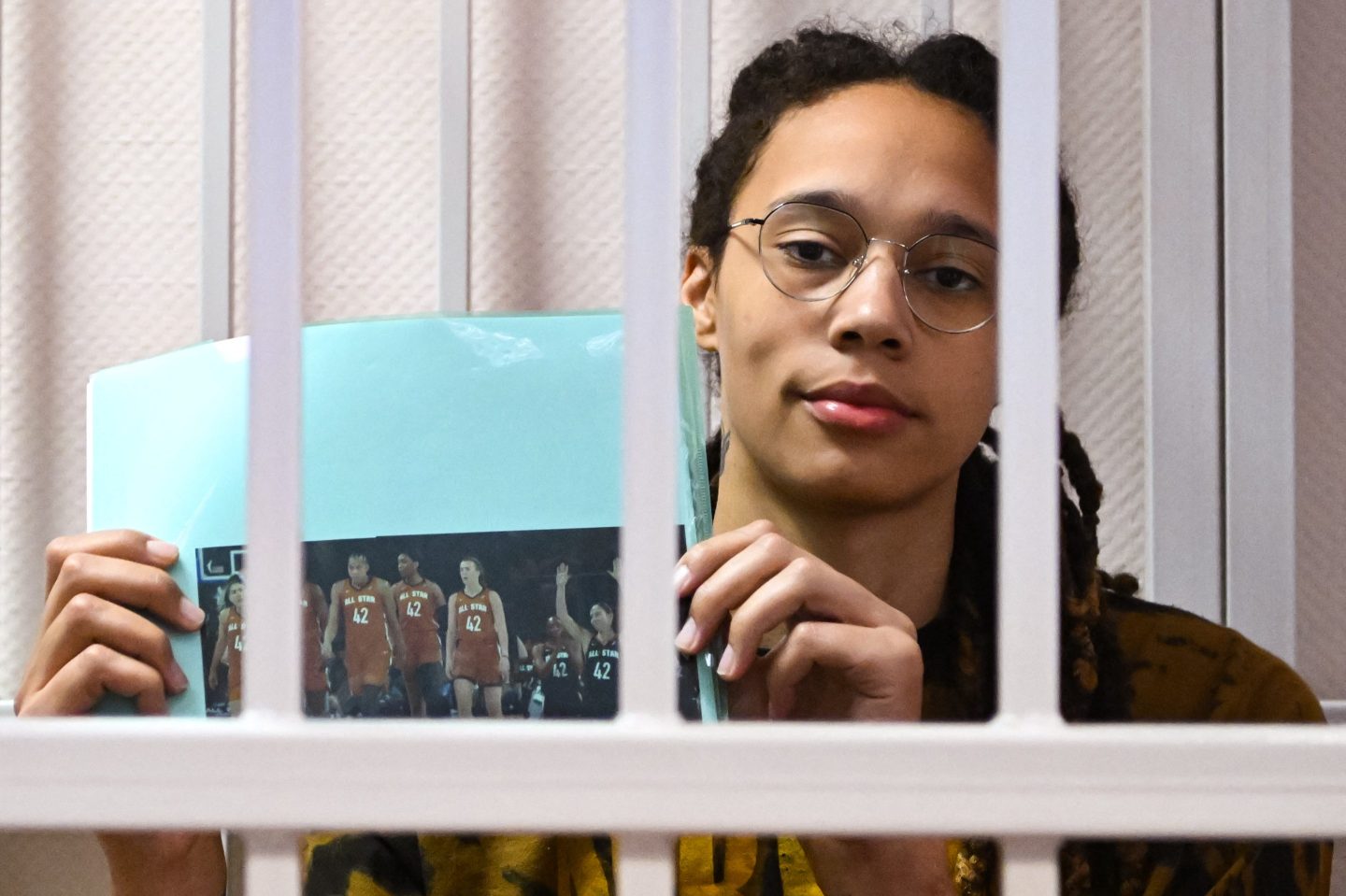 Good morning, Broadsheet readers! The House votes to codify the right to contraception, period tracking helped England advance in the Women’s Euro, and Black women are fighting to free Brittney Griner. Plus: a bit of news from a familiar face. Have a restful weekend.

– Free Brittney. When WNBA star Brittney Griner was initially detained in Russia in February, experts on Russian affairs and the experiences of Black people in Russia gave her family, friends, and colleagues simple advice: stay quiet. Hoping to secure the Phoenix Mercury player’s release behind the scenes, rather than elevate her detention to a geopolitical matter, people close to Griner acted with her welfare solely in mind.

Staying silent wasn’t easy for Griner’s WNBA teammates, who are used to speaking out on social issues. “It was grueling,” says Terri Jackson, the executive director for the WNBA Players Association. Eventually, however, the calculation shifted. Griner’s wife, Cherelle Griner, “signaled she needed us,” Jackson says. “And we were ready to speak up because we had been preparing, studying, and learning.”

About a month ago, Cherelle began to speak out about her wife’s detention. Since then, WNBA players and other Black women have put their all into advocating for Griner’s release. Jackson has hit the media circuit and instructed her team to contact outlets like ESPN when sports news programs failed to mention Griner’s case. Griner was detained on drug charges after cannabis oil was found in her luggage; her lawyers argue that she had a prescription for the drug and no trace of it was found in her system at the time. She pled guilty to the charges earlier this month, which could come with up to 10 years of prison time in Russia. The plea was likely part of a strategy to secure her release.

The Bring Our Families Home Campaign this week unveiled a mural in Washington, D.C. featuring images of Americans detained abroad, including Griner. And an influential network called Win With Black Women has also stepped in.

The network boasts thousands of Black women and was formed in August 2020, shortly after the murder of George Floyd and as some women began to notice racism and sexism permeating the conversation about who would become Joe Biden’s vice presidential pick. “We knew it was important as concerned citizens, as Americans, as Black women that we stand alongside the WNBA Players Association and Brittney—because she’s one of us,” says Full Circle Strategies CEO Jotaka Eaddy, who convened the network.

The impact of their support has been immeasurable to the WNBA players who have so often taken on the mantle of advocacy—this time for a cause that’s even closer to home. “My very first year in this job, we stepped out to champion Black Lives Matter. Then it was Charlottesville, then COVID. Talking about the importance of health equity for Black and brown communities, access to vaccines, voting rights. Every year, it’s something they take on,” says Jackson. “For my players, this is the work they do—but it’s heavy.”

For all the women fighting to bring Griner to safety, their only priority is getting her home. Once she is safely on U.S. shores, however, they will hopefully be able to move on to the issues her detention has raised. “What’s happening now tells me that in order to do right by my players, we’re going to have to have a hard conversation about pay equity,” Jackson says. Griner was in Russia playing professional basketball, where many women athletes often go during the off season to earn large paychecks that supplement their relatively small salaries in the U.S. “We are going to have to have that hard, honest conversation to make sure this does not happen again.”

Until then? “We’re going to do all that we can to raise our voices to advocate until she is home,” Eaddy says.

Hello again, Broadsheet readers! This is Kristen—I hope you’ll allow me to interrupt your Friday newsletter one last time. Next week is my last at Fortune—I’m leaving for a new adventure—and I couldn’t go without saying goodbye. Working on the Broadsheet has been one of the most fulfilling projects of my professional life, and that’s thanks to you, the most thoughtful, engaged, and opinionated group of readers I could hope for. Keep reading—and keep in touch! You can always find me @kayelbee.

- Team effort. In a new feature, Fortune's Geoff Colvin digs into a turnaround plan at the insurer AIG. As part of its strategy, the company transferred 6,000 employees from AIG to Accenture. Accenture CEO Julie Sweet says the transition involved "the most people we’ve ever taken on at one time." Fortune

- Bill of rights. The House of Representatives yesterday passed a bill that would codify the right to contraception. Only eight Republicans joined the Democrats to vote in favor of the legislation. Equivalent legislation in the Senate faces tough odds, with GOP lawmakers voicing concerns that the bill is too "broad." The Hill

- Presidential first. Droupadi Murmu was chosen this week to become the next president of India, a largely ceremonial role. The former governor of Jharkhand State will be the first president of India to come from an Indigenous tribal community. New York Times

- Settled matter. The University of North Carolina at Chapel Hill settled with Nikole Hannah-Jones, the Pulitzer Prize-winning journalist who was offered a position at the school without tenure after a university donor objected to her approach to "objectivity." The settlement was reported to be around $75,000, although Hannah-Jones says the sum was larger. As part of the deal, the school pledged to diversify faculty hiring. Chronicle of Higher Education

- Quitting cardboard. The designer Rachel Comey explains how she ditched Uline, which has a near-monopoly on packaging and shipping supplies and is owned by a family of right-wing donors. The process of finding new suppliers to ship her brand's products began years ago. Ultimately, she relied on a campaign called Refuse Uline that helps businesses find local alternatives. Strategist

- Training cycle. England's women's soccer team beat Spain 2-1 on Wednesday night to advance to the semi-final of the Women's Euro. At least one player achieved that win with an under-utilized strategy: adjusting her training to match her menstrual cycle. Defender Millie Bright says tracking her period and playing accordingly has transformed her game. The Telegraph

- Summer slowdown. The number of female directors at S&P banks has stayed flat for four months—the longest period without any change since 2019. While a period of low activity following annual meetings is to be expected, some worry that the dry spell reflects a slowed pace of change now that women hold 33% of these roles. Bloomberg

This summer is all about second wife energy Vogue

Why Ilana Glazer is speaking out about pelvic health Vogue

- Michelle Obama on her forthcoming book The Light We Carry. The book, scheduled for publication this fall, will be a follow-up to the runaway success of her memoir Becoming.