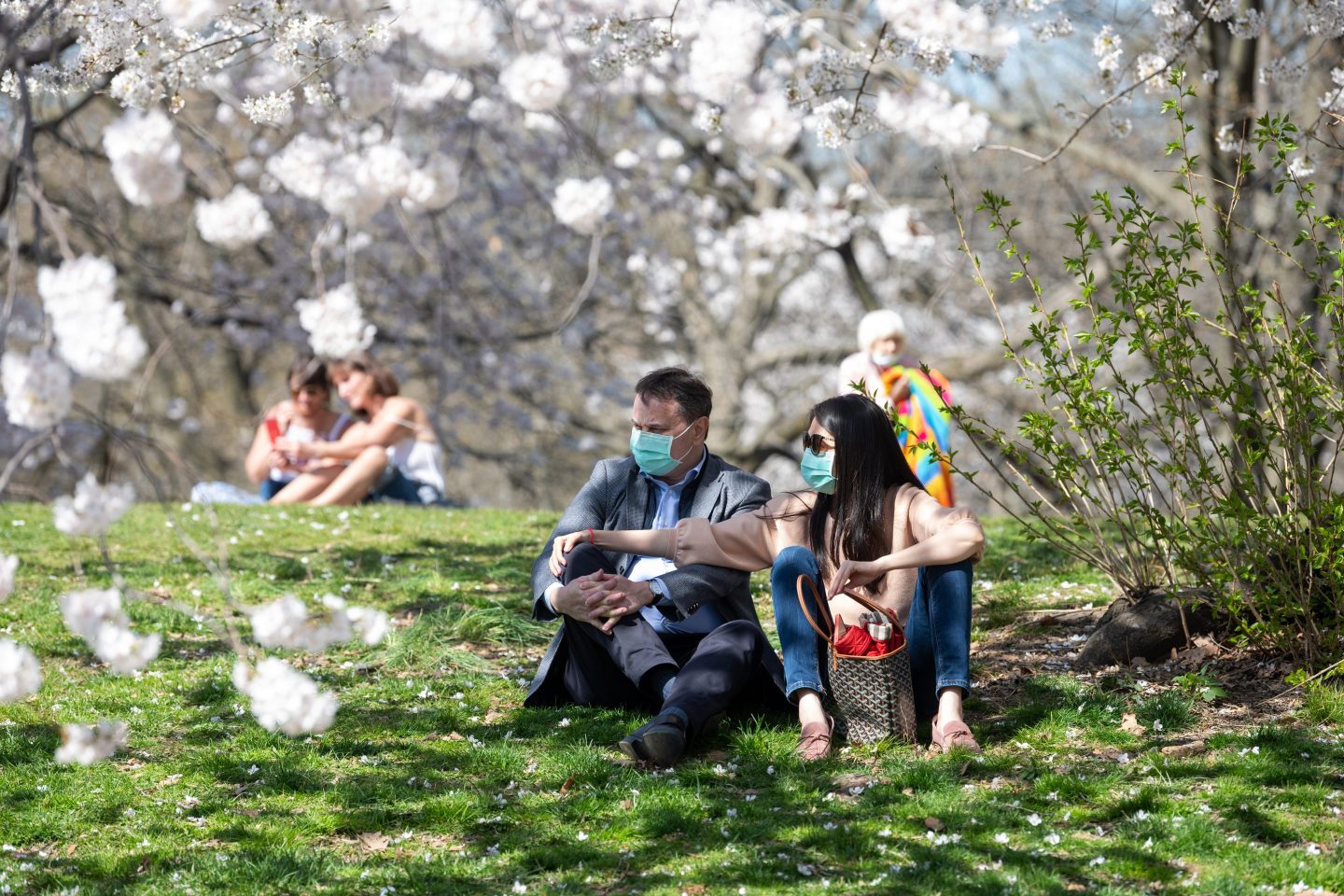 A couple wearing masks sits under blooming Japanese Cherry Blossom trees in Central Park amid the coronavirus pandemic on April 8, 2021, in New York City. When we talk about immune-evading COVID variants like Omicron BA.5, we’re really only talking about antibody immunity—and that’s only half of the story.
Alexi Rosenfeld—Getty Images

It’s the summer of reinfection, with the likelihood of getting COVID yet again higher than ever, thanks to an ultra-transmissible, immune-evading subvariant. Those variants have mutated what should have been a light, breezy summer to be enjoyed into yet another heavy season to be endured—with few opportunities for reprieve, even outdoors.

The U.S. Centers for Disease Control and Prevention’s chart shows an extended wave (or wall?) of infections, with cases slowly trending upward. But wastewater data—perhaps now our best indicator of COVID in communities—belies those numbers. Nearly half of nationwide sewage testing sites reported COVID levels at 60% to 100% of their all-time high as of this week, according to CDC data.

There’s Long COVID to keep in mind too: Early studies show that repeat COVID infections—even asymptomatic and mild ones—put individuals at greater risk for the nascent condition, which can result in long-term disability and even death.

We could all use a bit of good news right now, and the good news is this: COVID variants can evade antibody immunity all they want—but they’ll still have to reckon with T cells, the oft-ignored and not-as-well-understood other half of the immune system.

While antibodies, specialized proteins produced by the immune system, search for pathogens and incapacitate or destroy them, they don’t last long—typically just a handful of months. They latch on to a specific part of a virus that’s subject to change with new variants, potentially reducing their efficacy.

T cells, a type of white blood cell produced by stem cells in the bone marrow, don’t prevent infection or Long COVID. But they’re capable of dramatically reducing the severity of a COVID infection, rendering a potentially deadly virus all but mute in some individuals, depending on their body’s T-cell response.

Because their response isn’t limited to one specific part of the virus, as is the case with antibodies, they continue to attack, even when the virus mutates and changes shape. And their protection is much more durable, known to last for years, in some cases. Experts say that widespread accumulation of T cells—from vaccine and/or infection—in the population has likely led to generally less severe outcomes for new variants sweeping the country.

“T cells are kind of a win that I don’t think are appreciated as much as they should be,” Dr. Duane Wesemann, a professor at Harvard Medical School and a principal investigator in the Division of Rheumatology, Immunology, and Allergy at Brigham and Women’s Hospital, told Fortune. They’re “not quite a silver bullet—but a composite steel bullet that’s worked for us and is already in hand.”

Society is “depressed a little bit because everyone is getting infected with new variants,” Wesemann said. “But T cells are still at work, doing the good work of preventing severe disease.”

The immune system’s oft-neglected other half

New COVID subvariants like BA.4 and BA.5, currently sweeping the nation, have learned to evade immunity, leading to countless reinfections—even among vaccinated people who were infected by a different subvariant just a few weeks ago.

But when we talk about immune-evading variants, we’re really only talking about antibody immunity—and that’s only half of the story. There’s a whole other side of immunity that doesn’t get much attention, in part because T cells aren’t understood as well and are more difficult to study.

T cells “have played a critical role in shielding us from the worst ravages of COVID-19,” Harvard Medical School’s Ekaterina Pesheva writes in a recent blog, adding that they are the “unsung heroes” of the pandemic.

“When antibodies fail to stop the virus from getting into our cells, T cells come to the rescue,” she writes. “If antibodies are the rampart around the castle, then T cells are the elite guards inside it that disable intruders, should they manage to sneak in.”

That means that T cells have been a critical part of our natural immune response to COVID and vaccines.

“Antibodies are what we rely on to prevent infection, but if somebody becomes infected … those T cells can attenuate the course of the disease in what can be a very dramatic way,” Dr. Bruce Walker, director of the Ragon Institute of MGH, MIT, and Harvard, a medical institute focused on eradicating disease, and co-leader of the Massachusetts Consortium on Pathogen Readiness—told Fortune. .

COVID infection leads to a “robust” T-cell response that lasts for at least 15 months, according to a study published this spring in the journal Nature Immunology. And a 2020 study published in Nature found evidence of T-cell response to another coronavirus—SARS (severe acute respiratory syndrome), an epidemic that emerged in 2002 and killed hundreds—in previously infected patients 17 years later.

New subvariants like BA.4 and BA.5 are increasingly running up against a wall of T-cell based immunity in the population at large, Dr. Amesh Adalja, a senior scholar at the Johns Hopkins Center for Health Security, told Fortune.

Classic herd immunity—a potential end game floated by some officials during the beginning of the pandemic—isn’t possible with COVID because it continues to mutate, vaccine uptake isn’t where it needs to be, and antibody protection wanes. T cells, while less potent, offer some level of durable defense against severe infection at a population level—a “herd protection” of sorts, though how much T cells help an individual depends on their body’s individual response.

“Everyone focuses only on antibody-induced immunity, but for severe disease, the T-cell immunity is very, very important, and it’s not something you can just get around,” Adalja said, adding that immunity is a spectrum that ranges from merely protecting against death, hospitalization, and severe infection, to preventing infection altogether.

Hospitalizations will undoubtedly rise during the BA.4 and BA.5 wave, he said. “But will they become unmanageable? That’s become increasingly difficult for COVID to do in the U.S.”

On a similar note, Walker believes that T cells “are really what’s going to turn this pandemic into something more controllable.”

“As these new variants are arising and people are getting exposed and infected, what we’ve seen is that, in general, the virulence of the disease has not been as great,” he said earlier this month. “I think a lot of that has to do with the fact that people have generated some level of T-cell response.”

“For weeks now more transmission has been occurring, but hospitalizations haven’t gone through the roof. I think it speaks to—at least for now—some of the wind having been taken out of the sails of the pandemic.”