Singapore welcomed crypto firms. Then it vowed to crack down. The mixed messages are risking its ‘crypto hub’ future 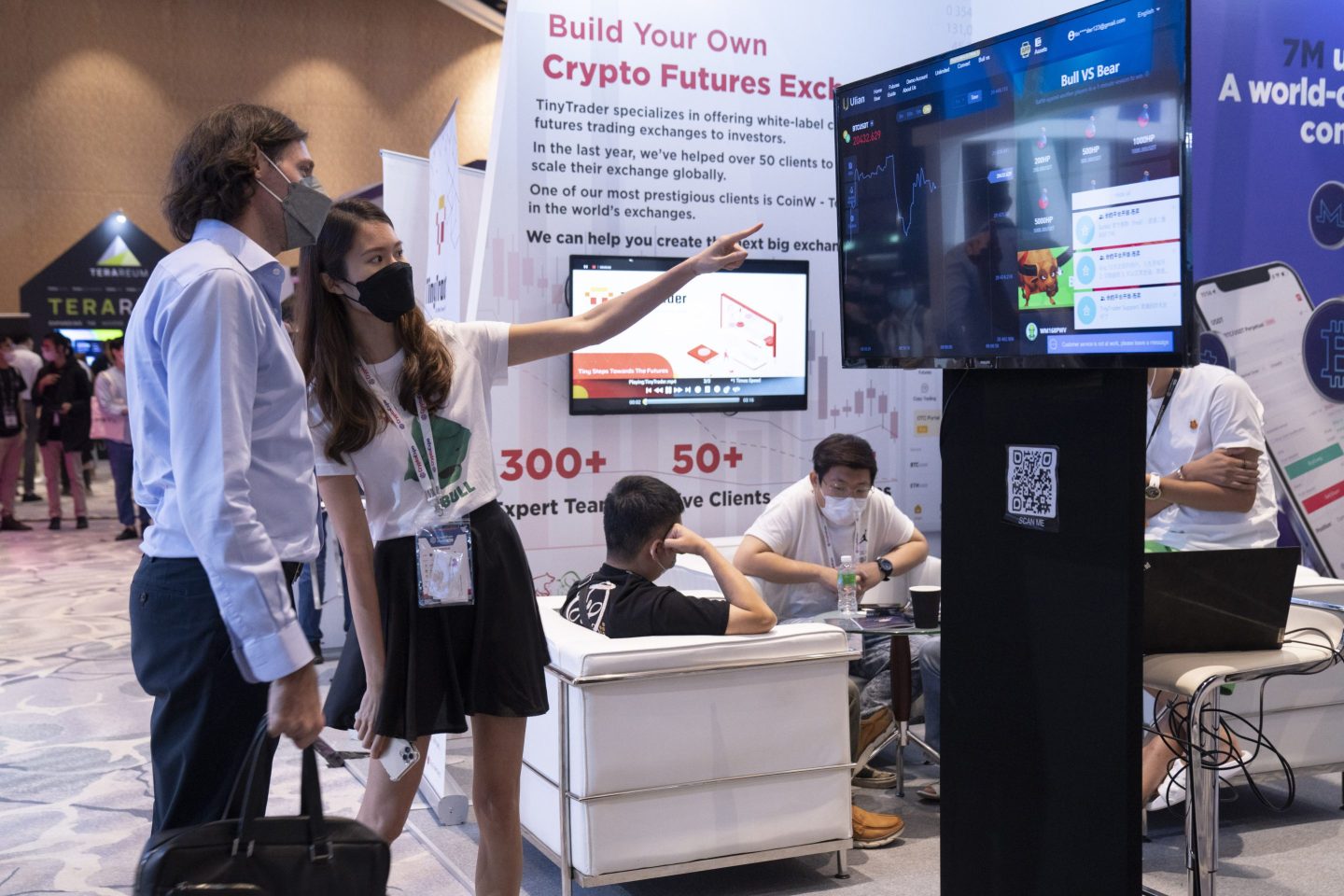 Singapore, Asia’s self-proclaimed cryptocurrency hub, is sending mixed messages about its stance toward the digital currency businesses it has courted.

Last week, chairman of the Monetary Authority of Singapore Tharman Shanmugaratnam wrote in a statement to parliament that Singapore’s central bank is “carefully considering” introducing rules to limit retail investing and the “use of leverage“ in crypto investing in the city-state. The announcement follows the central bank’s recent declaration that cryptocurrencies have “no fundamental value.”

In early June, Sopnendu Mohanty, the MAS’s chief fintech officer, also pledged a “brutal and unrelenting” crackdown against misbehaving crypto firms in a speech at the Point Zero Forum, a fintech conference, in Switzerland.

But Singaporean authorities have not completely soured on the crypto industry. Following the Point Zero Forum, Mohanty heaped praise on crypto firms Binance, Crypto.com, and Ripple in a LinkedIn post, saying that the three crypto exchanges are “fully committed to building a secure and sustainable innovation solving real problems.“

“The future is on the right path,” Mohanty wrote.

Singapore’s wishy-washy stance on crypto is part of a strategy to promote crypto projects the government likes while rooting out firms it considers bad actors. The government approves of crypto firms only so long as they place strict limits on local retail investing, suggesting authorities want to reap the potential economic rewards of fostering a crypto industry without exposing its citizens to the risks inherent to crypto trading.

In some ways, Singapore’s capricious oversight has legitimized the emerging crypto industry by subjecting operators to staunch government regulation. But the regulatory scheme the government introduced is so stringent that it’s forcing even the established, well-funded players that Singapore is pursuing—Binance chief among them—to decamp for places like Dubai, where the government has enacted less exacting standards.

Singapore was an early blockchain adopter and became the first country in Asia to host a Bitcoin ATM in 2014. The government piloted a blockchain-based interbank payments system as early as 2016 and in 2020 created a $12 million research program to promote Singapore-based blockchain startups.

In September 2021, the Chinese government issued an all-encompassing ban on cryptocurrencies, effectively wiping out a thriving crypto industry overnight. At the time, China was responsible for the vast majority of Bitcoin mining—an energy-intensive process for verifying Bitcoin transactions. After the ban, Chinese Bitcoin miners migrated to places like Kazakhstan and Texas, where abundant energy runs cheaply. Singapore, meanwhile, became a destination for China’s other crypto refugees—crypto investors, decentralized finance firms like Cobo, and exchanges like Bybit, OKCoin, and Huobi.

It’s not just that entrepreneurs were fleeing China; Singapore’s government was actively wooing them.

“It provides certainty for us as industry participants and security for our customers, knowing that their chosen platform has passed the scrutiny of a world-class regulator,” Adrian Przelozny, CEO of Independent Reserve, said in a statement at the time.

In May, Singapore’s government, in partnership with global banks DBS Bank Ltd. and JPMorgan and Marketnode, a joint venture between the Singapore stock exchange and state holding company Temasek, launched Project Guardian, a pilot aimed at finding use cases for blockchain and other decentralized finance technologies in the city’s financial networks.

Singapore’s government has argued that a flourishing crypto market will burnish the city-state’s reputation as a financial hub and position it a fintech leader. “Getting early into this game means we can have a head start and better understand its potential benefits as well as its risks,” Ravi Menon, managing director of the MAS, said last November. “Not to get into this game, I think, risks Singapore being left behind.”

Singapore’s friendliness toward crypto helped attract crypto firms and investors to the city-state last year. In 2021, crypto startups in Singapore raised $1.5 billion, up from $109 million in 2020, according to consultancy KPMG. Singapore became the clear blockchain leader in Asia, as the city-state accounted for nearly half of all crypto investments in Asia in 2021. Singapore’s crypto industry has created jobs and generated tax revenues, and government ministers have argued that a thriving crypto scene in Singapore may make it easier for underserved populations to access financial resources.

“[Singapore] did an incredible job in the early half of last year to attract many foreign players…posturing themselves as a welcoming place for crypto,” says the founder of a Singapore-based crypto startup, who asked to remain anonymous owing to regulatory concerns.

But amid Singapore’s efforts to attract crypto firms, the MAS has consistently warned that crypto investing is “highly risky” and that people can lose “most of the money” they invest. Earlier this year, Singapore’s government also banned crypto firms from marketing their products to the public and outlawed Bitcoin ATMs, a common on-ramp for crypto investors. Following the recent crash of stablecoin Terra Luna, Singapore’s Deputy Prime Minister Heng Swee Keat told investors at a forum in Singapore to “steer clear” of all crypto trading.

After an initial warm welcome, some crypto firms in Singapore are starting to feel left out in the cold.

Crypto insiders in Singapore say that such requirements are reasonable, but they warn that the MAS’s high bar may scare off crypto firms, especially when other jurisdictions don’t mandate such intense reviews. So far, few firms have completed the process. Singapore had received 196 applications for crypto licenses as of the end of May and had issued just fourteen.

Many crypto firms in Singapore continued to operate through the loophole that let them serve institutional investors and overseas clients as long as they steered clear of local Singaporean retail investors. But Singapore eliminated that work-around in April when it announced that all crypto firms must obtain a license to operate in the city-state, even ones that exclusively serve overseas clients.

“What this means is that the local [versus] offshore retail activity distinction is less meaningful,” Bailey says. “So long as this [licensing] provision is in place, and so long as licenses prove difficult to acquire, it’s unlikely that Singapore can maintain a ‘Crypto Hub of Asia’ title.”

Previously, many of the crypto firms operating in Singapore looked past Singapore’s strict standards for serving Singaporean retail investors since the local market accounts for up only a small portion of crypto activity globally. But when Singapore tightened the rules in April to no longer differentiate between firms that served local clients and those that served clients overseas, companies began fleeing to Dubai and other locations with looser rules.

Binance stoked rumors that it would invest in the Singapore market last year after hiring Richard Teng, former chief regulatory officer of the Singapore stock exchange, to run Binance’s Singapore operation. But speculation cooled last December when Binance withdrew its application to set up a local crypto exchange in Singapore and reappointed Teng as head of its Middle East business. Binance has since moved much of its Singapore staff to Dubai, though Binance CEO Changpeng Zhao says that the firm maintains a “close and cooperative” relationship with the Singapore government.

Still, crypto firms have the right to operate in Singapore so long as they file for an application for a crypto license; they can keep running their businesses as they await the MAS’s verdict. And even though licenses have proved difficult to acquire, Singapore’s ecosystem for crypto startups remains unmatched in Asia, according to the crypto founder. The challenge to Singapore lies outside the region, where jurisdictions are removing barriers for crypto firms.

“Operating in Singapore from a decentralized finance startup, fund, or exchange perspective that deals directly with retail [investors] is like driving a car in a highway with a 100 mph limit—pretty fast. But everyone else in Dubai is driving at 200 mph,” said the crypto founder. “Who doesn’t want to go faster?”

In February, Dubai passed its first law regulating digital assets. The law’s standards appear to be far more lax than Singapore’s given the ease with which companies have acquired licenses, helping establish the emirate as one of the most crypto-friendly regimes in the world. Dubai has not published statistics on how many licenses it’s granted, but major crypto players including FTX, Binance, BitOasis, and Crypto.com announced that Dubai had approved their crypto applications within weeks of the law’s passage. And, unlike Singapore, Dubai has established several “free zones” with tax-free crypto trading, helping attract over 400 crypto firms to the city.

Amid the recent downturn of the crypto market and the spectacular blowups of crypto firms like Terra, Singaporean authorities seem more emboldened to criticize the crypto industry and outline its potential dangers.

“Cryptocurrencies are not currencies, and they are unlikely to perform the functions of money as prices are subject to sharp speculative swings,” the MAS said in the statement to Forkast. “MAS frowns on cryptocurrencies as investments for retail investors.”

And yet, some in Singapore’s blockchain industry remain confident in the city-state’s crypto future.

“I think Singapore’s regulators are being thoughtful about the crypto industry. They realize it’s a massive opportunity for Singapore, but also that it’s a space involving risks,” says Alex Svanevik, CEO of Nansen, a Singapore-based blockchain analytics platform. “Asia is the world’s largest market for crypto. And Singapore is the best positioned country in Asia to be its leading crypto hub.”