How women can successfully negotiate severance, just in time for layoffs 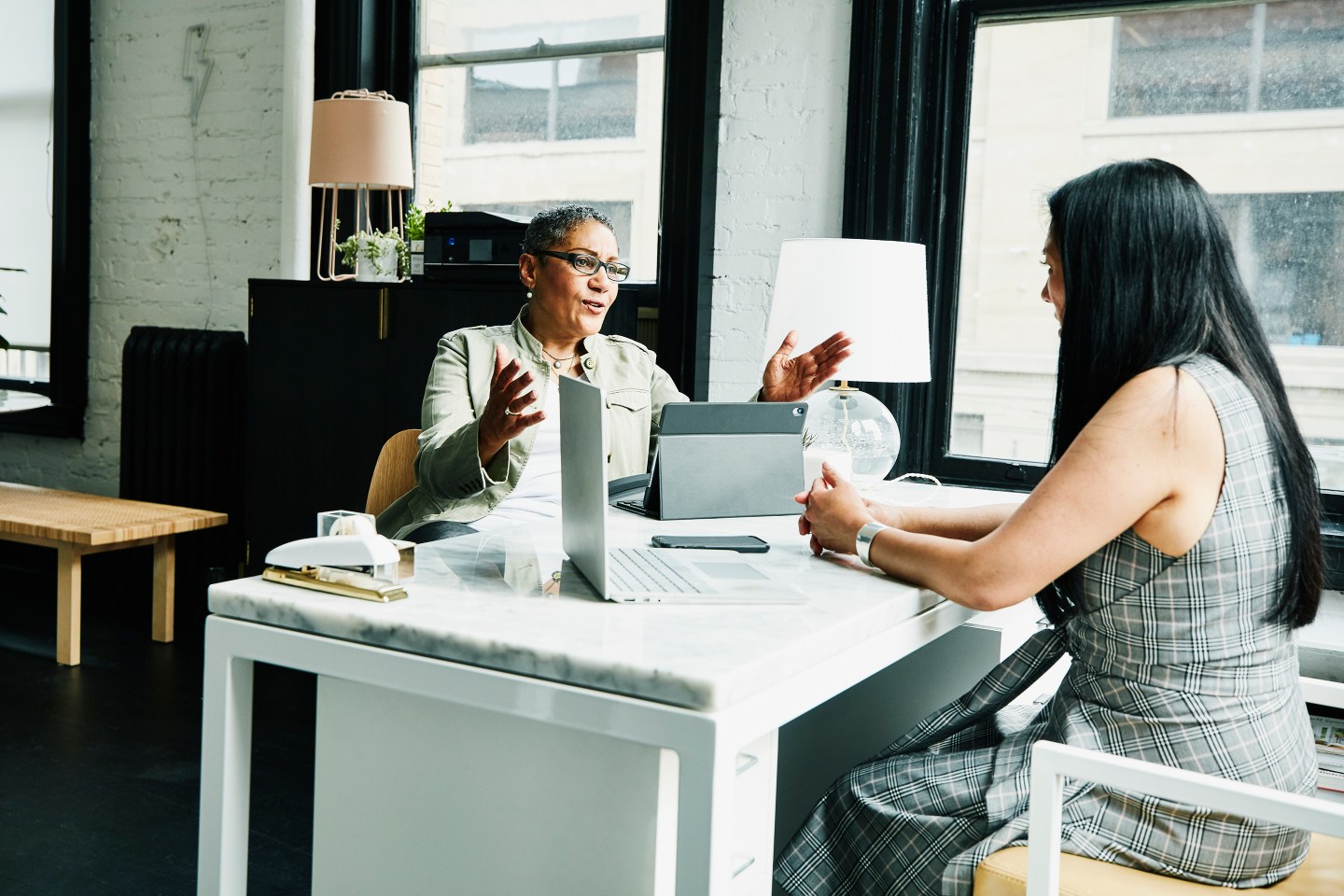 Negotiating a severance package is especially beneficial for women, allowing them to secure the resources they need to find their next job without panic.
Thomas Barwick—Getty Images

Good morning, Broadsheet readers! This is Paige McGlauflin, filling in for Emma. Google is countersuing Match Group over its in-app payments dispute, first lady Jill Biden apologized for poorly-worded remarks about the Latino community, and women should negotiate their severance.

– Landing the deal. Now is the best time for women to negotiate their severance package as layoffs, spurred in large part by a recession scare, are sweeping across corporate America.

Negotiating a severance deal may seem unorthodox, but it makes sense: If women are encouraged to negotiate their compensation package upon hire and push for raises during performance reviews, why not do the same when exiting a role?

“It’s the same type of negotiation. It’s just on your way out instead of on your way up,” Alexis Krivkovich, a managing partner at McKinsey’s San Francisco office and co-founding author of the firm’s annual Women in the Workplace report, told me in an article published today.

Unfortunately, much like with salary negotiations, women are less likely to successfully negotiate increased severance packages than men, despite engaging in negotiations at comparable rates. That’s because when women self-advocate in the same manner as men, they’re more likely to be viewed as bossy, aggressive, sharp-elbowed, and difficult, says Krivkovich.

But women, especally those in senior roles, can and should negotiate their severance package, and the best time to do so is when signing a job offer. Admitedly, not all women are in a position to negotiate or renegotiate their severance package. And for many, severance talks begin only when they’ve received a layoff notice. But here’s a pro tip: employers are generally required to give workers 21 to 45 days to review a severance offer and, contrary to popular belief, employees don’t have to accept whatever offer HR doles out.

Women should take the time to fully review their severance offer, sharing it with their personal and professional networks to gather insight. They should also look beyond cash compensation and consider resources that will aid them in finding their next role like outplacement services or a connection to an execuitve recruitment firm.

Finally, women should be strategic about how they counter a severance offer and understand how gender biases can serve as an impediment, says Ben Cook, CEO of the negotiation consulting firm Riva.

“Negotiation is not about confidence, it’s about leverage,” he says. “If you just go in and say, ‘I demand this,’ you’re not going to get a good outcome.”

Read the full article on how to successfully negotiate severance packages here.

Finding success at work is only possible when you’re at your best health and well-being. To stay on top of your health, check out our new verticle, Fortune Well, here.

- Payment dispute. Google filed a countersuit against Match Group on Monday, alleging that the dating-app company is in breach of contract in a fight over the search giant's app store policies. In May, Match Group sued the tech giant, alleging it's being forced to use Google’s billing system to be included the app store. Now, Google wants to ban Match Group’s apps, which include Tinder, Match, and OkCupid, from its store. Former CEO Shar Dubey, who left Match Group in May, was a vocal critic of in-app payment policies during her tenure, calling payment policies that force app developers to exclusively use the host's payment systems unfair.

- Communication mishap. First lady Jill Biden apologized Tuesday for comparing San Antonio's Latino community to breakfast tacos in a speech. The Latino community, she told a Hispanic advocacy group, "is as distinct as the bodegas of the Bronx, as beautiful as the blossoms of Miami and as unique as the breakfast tacos here in San Antonio.” The National Association of Hispanic Journalists said Biden's remarks reflect a lack of “cultural knowledge and sensitivity.” Through a spokesperson, the first lady said she didn't intend to convey “anything but pure admiration and love for the Latino community.” Politico

- Policy change. ICE officials plan to instruct detention centers nationwide to allow women in custody to seek abortions, according to an undated memo made public on Tuesday. Currently, ICE facilitates abortions in the cases of rape or incest or when the pregnant person’s life is at risk. Under the new policy, women in custody who are held in states where abortion is prohibited will be transferred to a different center to receive the procedure. Wall Street Journal

- More from Jan 6. A Jan. 6 committee hearing yesterday revealed that former President Donald Trump planned to lead a march of his supporters to the Capitol, but wanted it to appear spontaneous. Former White House chief of staff, Katrina Pierson, sent an email to fellow rally organizers, stating that Trump planned to “call on everyone to march to the Capitol.” Kylie Jane Kremer, a rally organizer, sent a text on Jan. 4 urging that the plan be kept secret to avoid alerting the National Park Service, which issues permits for demonstrations in Washington. New York Times

MOVERS AND SHAKERS: Americares elected Mastercard executive vice president Susan Grossman to its board of directors. Issuu has hired Alessandra Andrenacci as vice president of growth partnerships. Claire Fang, former chief people officer at Qualtrics, has joined SeekOut as its first chief people officer. Wanjiru Kamau-Rutenberg has joined the board of Syngenta Foundation.

- Performance review bias. Performance reviews are more biased than often thought, but managers and employees are influenced by biases in different ways. Managers, for example, may be biased against women who adopt flexible hours to prioritze caregiving, while women employees often underrate themselves when completing self-evaluations. Harvard Business Review

In Ms. Marvel, Muslim fans see a reflection of their lives AP

Architects are getting ready for an abortion-clinic building spike Curbed

“We can recognize that this impacts women while also recognizing that it impacts other groups. Those things are not mutually exclusive.”

-UC Berkeley law professor Khiara Bridges, challenging Sen. Josh Hawley’s line of questioning during a Senate hearing on whether the topic of abortion rights should include trans people.