New Omicron subvariants are causing COVID rates to increase. These are the states where it’s most contagious right now 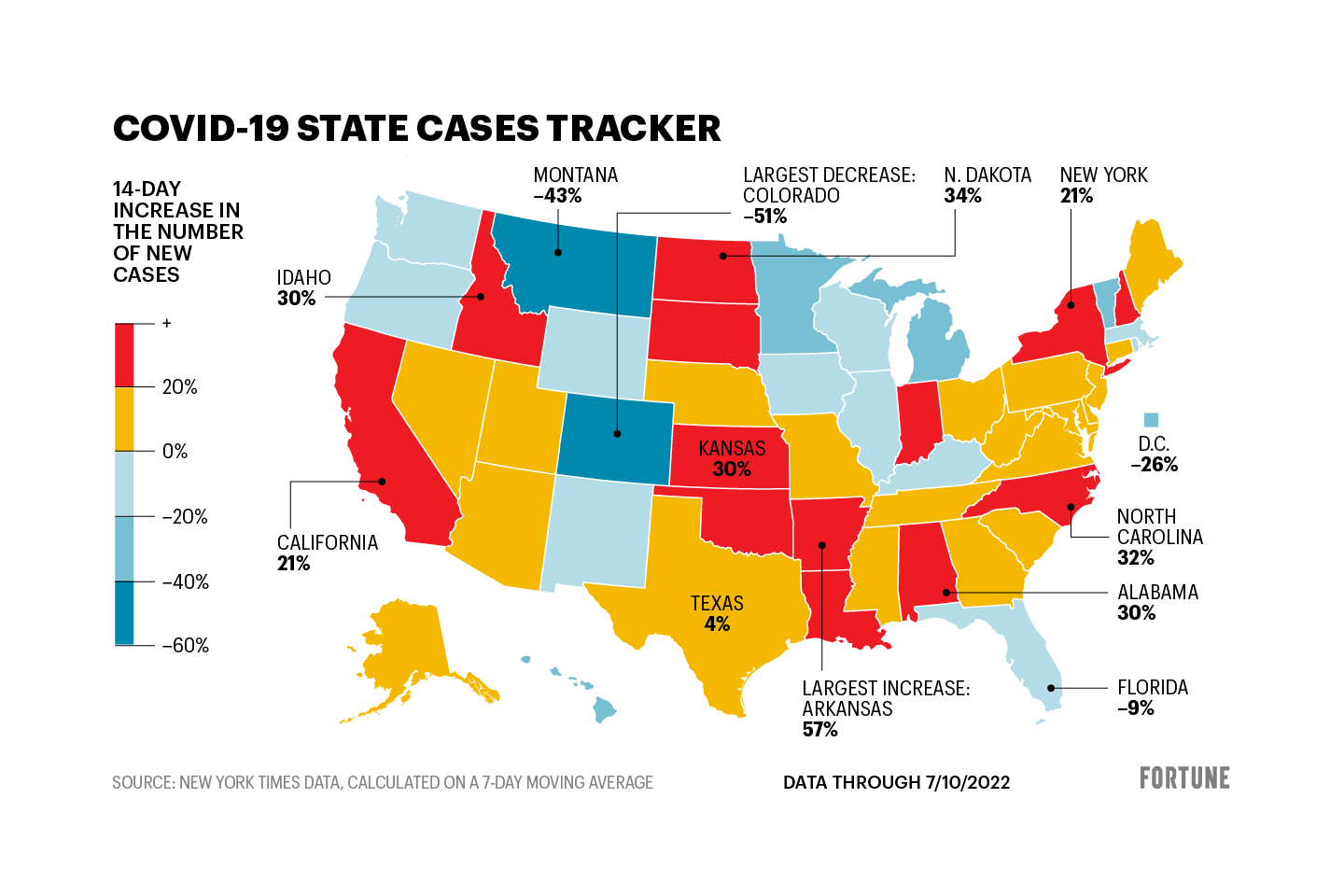 COVID cases are on the rise again in many U.S. states, as new immune-evading Omicron subvariants are now dominating worldwide.

BA.4 and BA.5, two of the newest versions of the so-called “stealth  Omicron” variant that swept the U.S. this spring, have been circulating across the globe for months, thanks to their ability to evade immunity from both prior infection and vaccination. Last week, the U.S. Centers for Disease Control and Prevention announced that BA.5 had officially become the most dominant strain in the country, accounting for an estimated 54% of new COVID infections in the previous week. ta

And experts predict that the official tally of new cases is likely a severe undercount, as Americans are increasingly using at-home COVID tests and not reporting their results, if they’re even aware they have the virus. Many states have closed testing sites altogether.

Now, a new and potentially more immune-evading subvariant—BA.2.75, dubbed “Centaurus” by some on Twitter—has arrived in the U.S. and approximately 10 other countries so far, further elevating expert’s concerns.

With cases steadily rising, here’s a look at the U.S. states that are experiencing some of the biggest upticks in COVID cases in the last two weeks.

Arkansas has seen the highest percent increase in new cases over the past weeks in the country, according to data compiled by The New York Times. Averaging 1,285 new cases per day, or 43 new cases per 100,000 people, the state has experienced a nation-high 54% increase in cases in the last two weeks.

"We anticipate that when school starts, we will see increased transmission of this particular variant, and for that reason it is going to be very important for people to start their vaccination process now if they have not been vaccinated yet, especially for adolescents and children," said Jennifer Dillaha, director of the Arkansas Department of Health, last week, as reported by Axios.

North Dakota has seen an 34% increase in cases over the last two weeks, the second highest rise in the country. The state is averaging 222 cases per day, or 29 new cases per 100,000 people, according to New York Times data.

Like Arkansas, the state ranks near the bottom of the country in coronavirus vaccination rates, with 56% of the state fully vaccinated against the virus.

There were 69 COVID hospitalizations in the state on average per day in North Dakota, an 11% increase over the last two weeks.

Unlike Arkansas and North Dakota, North Carolina ranks slightly below the middle of the pack in terms of vaccination rates, with 63% of the state’s population fully vaccinated against COVID-19.

Still, likely because of the new immune-evading subvariants, cases there are continuing to increase. There was a daily average of 1,288 hospitalizations due to COVID over the last two weeks throughout the state, a 19% increase over the prior two weeks.

Kansas saw a 30% jump in new cases over the last two weeks, with a daily average of 774 new cases, or 27 new cases per 100,000 people. Similar to North Carolina, 63% of Kansas’ population is fully vaccinated against the virus.

Hospitalizations from the virus were also up in Kansas in the last two weeks, with a daily average of 223, a 26% increase over the previous two weeks.

In Kansas City, one of the biggest cities in the state, the CDC has classified all five counties that make up the city as having “medium” community levels of COVID for the first time in months, a reflection of the growing strain of the virus on the city’s hospitals, according to the The Kansas City Star.

Other states rounding out the top 10 are Idaho, Alabama, Louisiana, Indiana, New Hampshire, and Oklahoma.