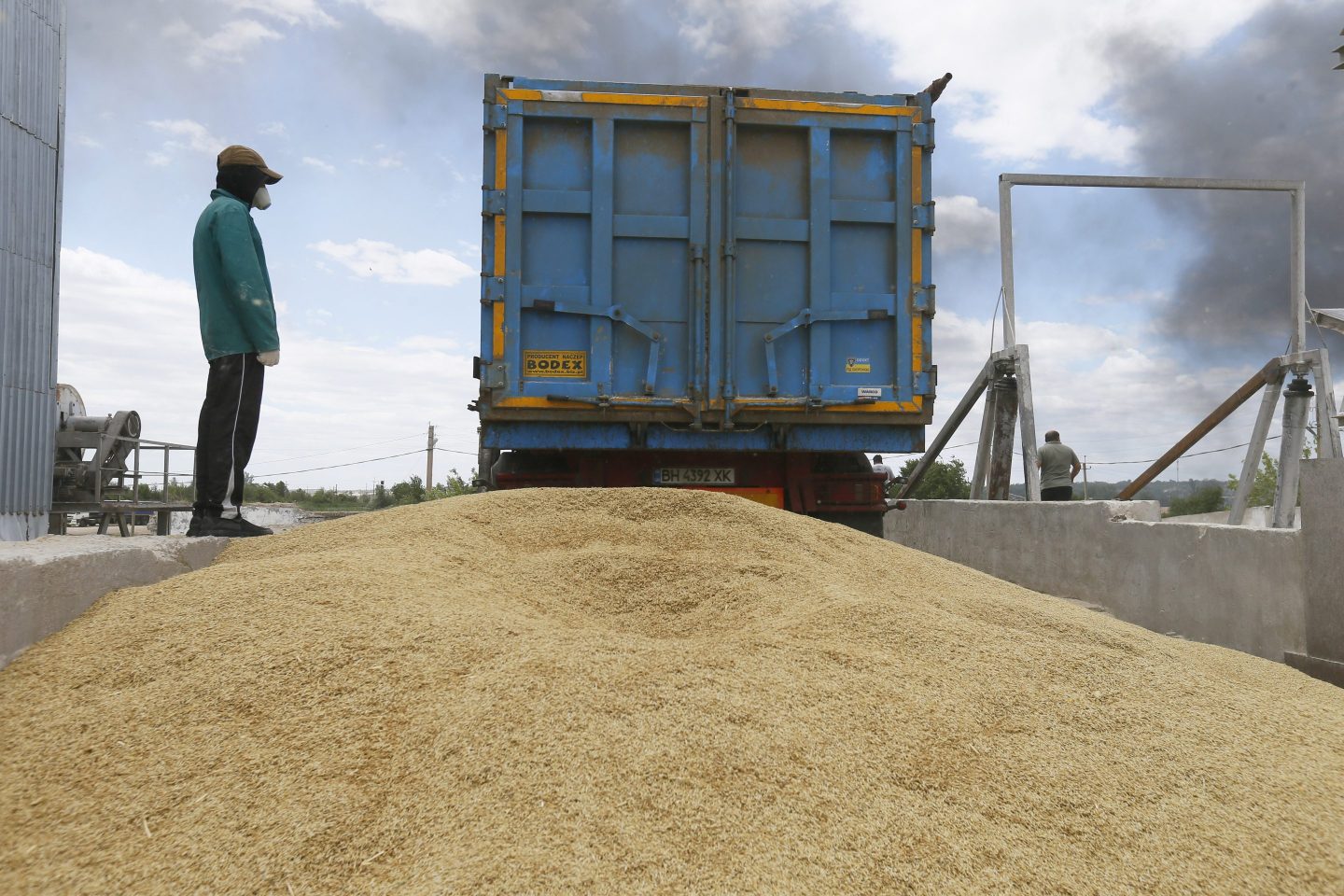 The year was 1990: The Soviet Union was on the verge of collapse, and Robert Koopman, then a young economist for the U.S. Department of Agriculture, was tasked with forecasting how the seismic events in Europe would affect American farmers.

His conclusion was sobering. He told his bosses that America’s huge exports of corn and wheat to Eastern Europe would probably plummet by more than half, as Russia and Ukraine—now capitalist countries—began pouring money into modernizing their farmlands, and turning themselves into agricultural powerhouses.

“The policy-makers were like, ‘No, we don’t believe this,’” recalls Koopman, who went on to become chief economist of the World Trade Organization, a position from which he retired on July 1. “They said, ‘We are not taking that to U.S. farmers.’”

More than 30 years on, Koopman has been proved right, to say the least. Huge swaths of the world have become dependent on Russian and Ukrainian grain. And the disruption of that supply by Russia’s invasion of Ukraine is now ricocheting across the world to threaten global economies and businesses.

By the time President Vladimir Putin sent his military into Ukraine in February, sparking the biggest conflict in Europe since the Second World War, the two countries together accounted for more than one-quarter of the world’s wheat supply. Ukraine—a country slightly smaller than Texas—exported about 38% of the world’s sunflower seeds, key to making cooking oil. The country also exports about 30 million tons of maize (corn) annually to the European Union alone—crucial to feeding millions of animals on the continent. Today, more than 5,000 miles from the battlefield, Americans face sticker shock in supermarkets for items ranging from breakfast cereal to sunflower oil.

Energy costs have drawn more attention than grocery prices as a side effect of the war. The pain has been felt globally as costs soar for air-conditioning and at the gas station. That is in part because Russia supplies about 25% of the world’s natural gas, 18% of its coal, and 11% of its oil—and thanks to U.S. and E.U. sanctions, much of that has been taken off the market or diverted. In all, oil prices on world markets have risen about 20% since the war broke out, and that comes on top of steep increases last year, as economies heated up again after the post-pandemic reopening.

But costs have risen even more dramatically on the food front. The cost of shipping containers of dry goods like wheat and corn has shot up about 60% since the war began, according to the United Nations. And even growing those grains has become hugely expensive, because the price of fertilizer, has risen 30% this year—in part because it’s made from petrochemicals, and in part because more than 10% of it is manufactured in Russia.

The question is: How much is this conflict to blame for global inflation and an economic downturn? Leaving aside the catastrophic human toll—tens of thousands dead, more than six million Ukrainians fled—figuring out the answer seems increasingly important, as the prospect of a global recession seems more likely. At stake is whether Western countries are prepared to bear ongoing economic pain for the sake of backing Ukraine against Russia, or whether they will begin pressing for a quick end to the war.

Economists say costing out the war is complicated. The conflict is happening while the U.S. and E.U. are still digging out from the two-year pandemic. There are also labor shortages in the U.S., an ongoing work-from-home phenomenon that is hammering commercial neighborhoods, and China’s COVID-19 lockdowns causing severe supply-chain disruptions. All of these factors can contribute to higher prices, slowdowns in economic activity, or both.

“There are a lot of macro developments happening, but we can tease out some elements,” Justin-Damien Guénette, the World Bank’s senior economist in Washington, told Fortune. The war’s single biggest impact, he says, is a deep recession in Russia and Ukraine expected this year. “Alone, those two countries contracting takes 0.3% off global growth forecasts,” he says.

Last month, the World Bank cut its global growth forecast for 2022 from 4.1% to 2.9%—down from 5.7% last year—and issued its sharpest warning yet about the war’s economic cost, saying that the ongoing conflict “magnified the slowdown in the global economy.” The Bank’s report outlined some dire consequences of the war, compounded by the pandemic, including “a protracted period of feeble growth and elevated inflation.” The report said slow growth could last until 2024, “as the war in Ukraine disrupts activity, investment, and trade in the near term, pent-up demand fades, and fiscal and monetary policy accommodation is withdrawn.”

As the Bank notes, the Ukraine war broke out at a time when growth was already slowing down, creating a cascade of effects. But as prices of essentials like food and gas have soared, American consumers—a major driver of economic growth—have slashed their spending on nonessentials, like electronics, homewares, and new cars, the U.S. Commerce Department reported last month.

American execs have now woken up to the perils. A recent Conference Board survey of 750 CEOs found that only 9% thought the war would have no effect on their business, while 60% expected a recession by 2023.

Still, the war’s impact on business is not all bad, according to the Conference Board. In response to the conflict, companies are speeding up their transition to renewable energy, improving their cybersecurity, and shifting supply-chain operations to avoid global disruptions. “While the war has certainly forced many businesses to put part of their strategic plans on hold…it is also acting as an accelerator,” says the report.

Closer to the battlefield, the impact is clear, especially to those who have spent decades trading Ukraine’s assets on world markets. Since early in the war, Russia has blocked some of Ukraine’s crucial Black Sea ports, including Odesa and Mykolaiv, while seizing others, like Kherson and Mariupol.

That has been devastating for food exports. “In the next few weeks we will harvest about 250,000 tons of wheat, but the problem is how to export it,” says John Rich, executive chairman of MHP, one of Ukraine’s biggest poultry and grain producers. MHP, which is traded on the London Stock Exchange, farms about one million acres in the country. “There is a limit to how much we can get out,” Rich, an Australian, told Fortune from Istanbul, where he lives when he is not in Kyiv.

Rich says MHP has trucked some of its poultry and grain overland to Romania’s Black Sea port of Constanta, but that port now faces severe congestion; vessels wait more than three weeks to leave, he says. Added to that, insurance companies have imposed war premiums of up to about $450,000 per shipment, according to Rich. Faced with crippling costs, MHP has been stockpiling some of its grains, a process Rich says is very costly, since dry containers are expensive and scarce.

Rich now estimates Ukraine will export about 30 million tons of grain this year—a steep drop from about 100 million tons a year in peacetime. Ukraine President Volodymyr Zelensky said on July 4 that he was negotiating a plan with Turkish and United Nations officials to ship about 22 million tons of grain stuck in the country, using NATO vessels to escort ships through the Black Sea.

But unless the war ends soon, farmers in Ukraine could be reluctant to sow fields in the planting period in October. “We will have nowhere to store [the grain] the following year,” Rich says. “Unless the ports reopen, I see no light at the end of the tunnel.”

That pessimism echoes the sense Koopman had 32 years ago, when he tried to predict the ripple effects on American farmers of the Soviet Union’s collapse. Still, as Koopman recalls, things worked out far better than he expected. U.S. farmers finally found new markets in Asia, and began competing with new agricultural giants like Brazil and Argentina.

“All this taught me a lesson,” he says. In times of major global disruptions, then and now, “markets adjust,” he says. “The world is dynamic, and transitions are often painful.”