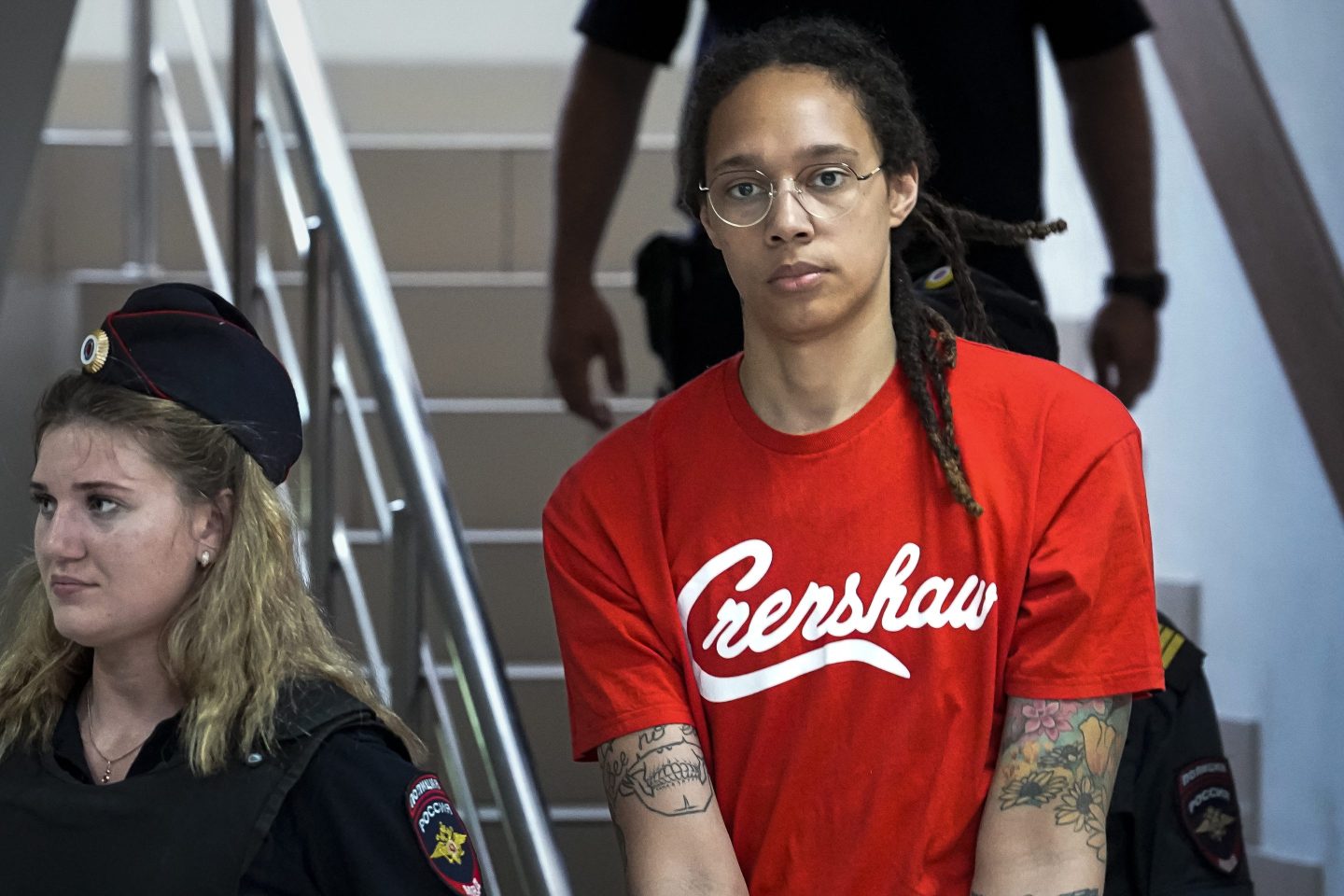 Brittney Griner is escorted to a courtroom for a hearing, in Khimki just outside Moscow, July 7th.
Alexander Zemlianichenko—AP Photo

A week into Brittney Griner’s trial in Russian court, the American basketball star pleaded guilty to carrying cannabis oil in her luggage and could face up to 10 years in prison if convicted.

“I’d like to plead guilty, your honor. But there was no intent. I didn’t want to break the law,” Griner told a judge Thursday at the second hearing of her trial, according to Reuters. “I’d like to give my testimony later. I need time to prepare.” Griner said in court that she had packed in a rush and the vape cartridges made it into her bag by accident, according to Russian media reports.

It’s yet another shocking turn of events in the detention of Griner, who is simply one of the best female basketball players alive, and has been in Russian custody since the outbreak of the ground war in Ukraine. Russia continues to claim the arrest of a prominent American citizen has nothing to do with its invasion of its neighboring country.

Russian authorities detained Griner, a seven-time WNBA All-Star for the Phoenix Mercury and an NCAA champion at Baylor University, at Moscow’s Sheremetyevo Airport in February after claiming to find two vape cartridges containing hashish oil in her carry-on luggage. Griner’s complicated detention has prompted worries that her high-profile status as an American athlete has made her a political pawn as tensions escalate between the U.S. and Russia.

Leading up to her guilty plea, Griner publicly pressured American President Joe Biden to intervene in a letter sent through her representatives. Her next court hearing is scheduled for July 14, and Griner’s legal team said they expect the trial to conclude at the beginning of August, according to Reuters.

But the question remains: What was one of the crown jewels of American basketball doing in Russia?

A look back at recent history suggests that prominent female athletes, especially basketball players, can just get paid better in Russia than they can at home.

Why was Brittney Griner in Russia?

Top players like Brittney Griner can earn quadruple their base salary in the WNBA by playing in Russia over the winter off-season, according to the Associated Press. Nneka Ogwumike, the head of the WNBA Players Association, agreed in an interview with Good Morning America that financial incentives compelled Griner to spend the last seven years in Russia for the winter despite safety concerns and political tensions.

Griner’s wife believes the opportunity to supplement her income “absolutely” played into the basketball star’s decision to head to Russia in the first place.

“BG would wholeheartedly love to not go overseas,” Cherelle Griner told ABC News in late May. “She has only had one Thanksgiving in the states in nine years since she’s been pro, and she misses all that stuff. Just because, you know, she can’t make enough money in the WNBA, like, to sustain her life.”

The WNBA Players Association did not respond to Fortune’s request for comment. A spokesperson for the WNBA was not immediately available for comment Friday.

Griner reportedly makes $1 million a year overseas playing for UMMC Ekaterinburg in the Russian Premier League. For the Mercury, her salary was $221,450 for the 2021-22 season, making her one of the WNBA’s highest-paid players. The league’s average base salary this season is $120,600 and the top WNBA salary is $228,000. Adding in marketing deals and bonuses, the WNBA says its players can make up to $650,000, while the average base salary in the NBA exceeds $7 million.

Where it gets complicated is there is no evidence that Russian Premier League basketball is remotely as popular as the WNBA.

How much do WNBA players make?

Pay in the WNBA is lower than in the NBA partly because the season is much shorter, with 36 games compared to 82 in the NBA, and the brands have considerably different earning power. The NBA is projecting $10 billion in revenue this season, according to Commissioner Adam Silver. Though the WNBA generates $60 million in revenue annually, Silver said in 2018 that its costs exceed that amount, and the league has lost $10 million on average each year that it has existed.

This offseason, 70 WNBA players went abroad. That’s down from 89 players who went overseas during the off-seasons of 2017 to 2018, but close to half of the league’s 144 players in total.

Other major WNBA stars have spent their offseasons overseas, including Liz Cambage, Diana Taurasi, and Sue Bird, who is married to the outspoken soccer star Megan Rapinoe, who led a campaign for pay equity in a historic lawsuit against the U.S. Soccer Federation.

When 60 Minutes asked Bird about Russian billionaire Shabtai Kalmanovich recruiting her for Spartak Moscow, she replied, “I’m a millionaire because of it.”

WNBA Commissioner Cathy Engelbert has pushed back on the theory that playing overseas is strictly a financial decision. “The outdated view is essentially that the only choice for W.N.B.A. players in the off-season is to go overseas and play,” Engelbert told The New York Times. “And it’s not the only choice. They have numerous choices to make lots of additional money.”

Why are salaries so much higher overseas?

Countries with tense relationships with the U.S. are more often the same ones that offer the most to America’s basketball greats. In Russia, which is regarded as the most lucrative overseas market for players, teams are typically owned by the country’s oligarchs. A Russian mining corporation and its billionaire owner Iskandar Makhmudov funds the club where Griner competed, UMMC Ekaterinburg.

Several American media reports suggest that the Russian fortunes being sunk into women’s basketball are part of a money laundering scheme.

In 2016, ESPN’s Kate Fagan visited Griner and Taurasi in Russia and observed near-empty arenas, cheap tickets, and an apparent lack of any significant culture around watching women’s basketball as signs that suspicious funds were bankrolling Russian teams.

The L.A. Times reported the late founder of Spartak, Shabtai Kalmanovich, appeared to make little money off the franchise that recruited Americans like Bird and Taurasi. No one even bothered to sell game tickets, he told the newspaper, but Kalmanovich put the players in a gated house, gave them money to dine at the best restaurants, and sent them on vacations.

Henry Abbott, another former ESPN basketball writer who now runs the digital media company True Hoop, ran the money-laundering rumors by a source: “I asked a veteran of the game, and she laughed, asked if I really didn’t know. Did they get better sponsors, sell more tickets I wondered? She felt sorry for me, being so dumb. Then announced: It’s money laundering,” Abbott tweeted in March.

And Kalmanovich, the man who helped Sue Bird attain millionaire status? He was shot dead in a contract killing in 2009. That’s the environment where the basketball great Brittney Griner could make millions, until she found herself facing a prison sentence.