Quantum hacking is the next big cybersecurity threat. Here’s how companies should prepare for ‘Y2Q’ 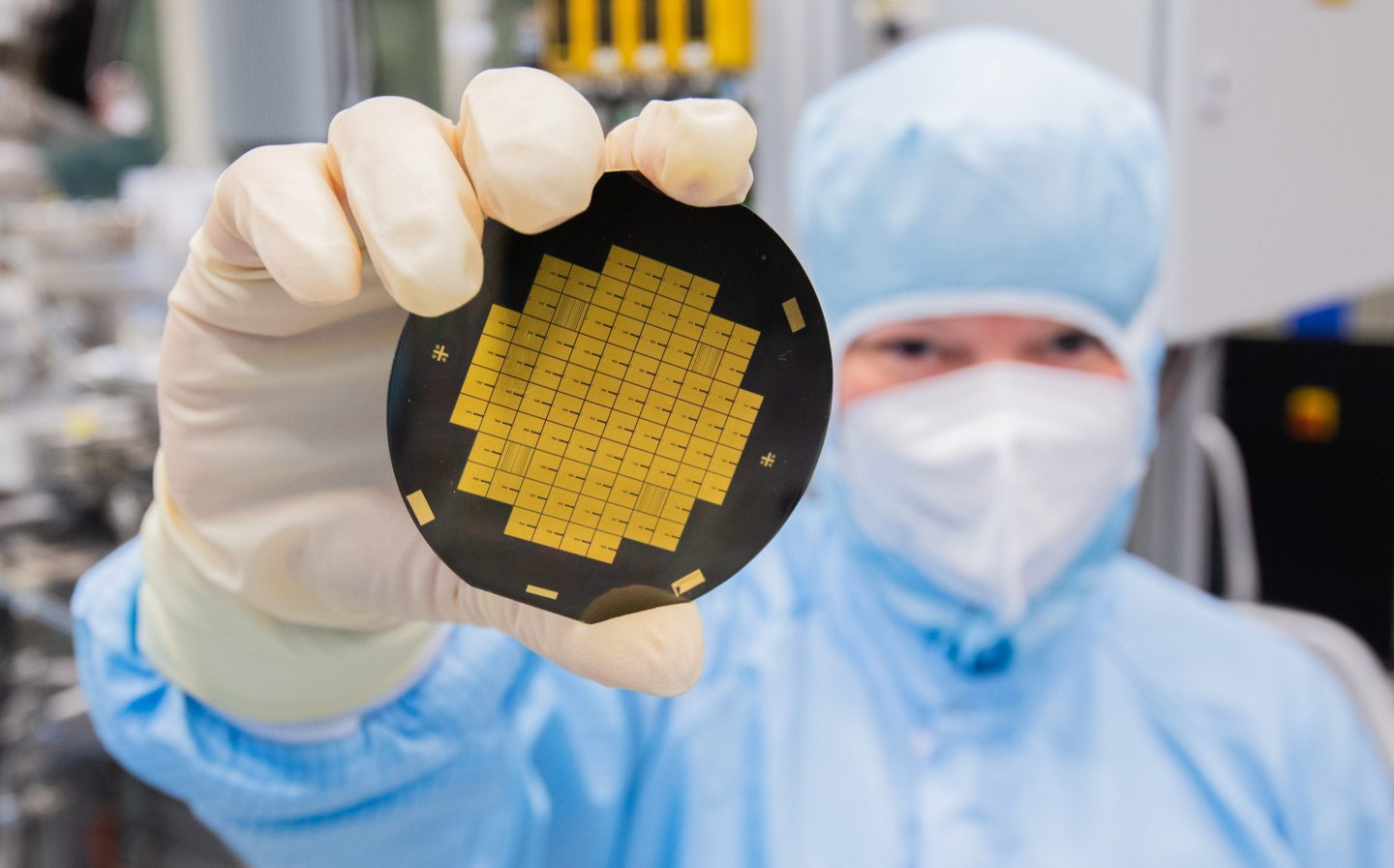 An engineer displays microchips for quantum processors at a laboratory in Germany. "In the not-too-distant future, mega data-breaches will become frequent" as quantum computing becomes more widespread, the authors write.
Julian Stratenschulte—picture alliance via Getty Images

Yahoo! Marriott International. Myspace. Under Armour. EBay. LinkedIn. Just what do these large companies have in common? The answer, as you may have guessed, is that these six corporations have been the victims of the biggest data breaches in the 21st century, with the number of those affected ranging from 117 million executives (LinkedIn in 2012) to as many as 3 billion users (Yahoo in 2013). Such mega virtual break-ins can cost companies hundreds of millions of dollars, but even standard data breaches can be expensive, especially after taking into account the loss of reputation and customers.

Scary as that may sound, the past may have been merely the prologue. Since the 1970s, the RSA cryptosystem, which uses very large prime numbers to create public keys that serve as the basis of the security protocol for data communicated between Internet applications, has proven to be relatively effective. Although Peter Shor of Bell Labs published a paper in 1994 showing that a quantum algorithm could crack the RSA cryptosystem, machines that can run such an algorithm haven’t been developed—yet. It has therefore been possible to develop bigger public keys faster than computers have speeded up, ensuring that the RSA cryptosystem continues to work.

It’s unlikely to stay that way much longer. Scientists are getting closer to developing a quantum computer, a new kind of system that can execute in minutes calculations that would take hundreds of years to complete on the world’s fastest conventional supercomputers. These machines will enable hackers to decipher public keys, and break through the security of almost any encrypted device or system. When exactly a quantum computing-caused Cyber Doomsday will dawn is unclear, but it could happen in just 10 years’ time.

Research on quantum computing hardware is growing quickly; BCG analyses show that approximately 75% of the $1.3 billion of private equity investment in quantum computing since 2018 has been on hardware development. In addition, governments have announced over $20 billion of investment since 2013 to develop quantum systems. As a result, the speed at which breakthroughs are taking place in the development of quantum hardware has accelerated in recent times.

In the not-too-distant future, mega data-breaches will become frequent. Quantum computers will also revive the risks from past breaches, because hackers will be able to use the hardware to decipher data they’ve already stolen. Both B2B and B2C customers will demand post-quantum data security, and companies that cannot provide it are likely to lose out on the license to operate. This looming threat has led to a countdown: Years to Quantum, or Y2Q.

In fact, the Cloud Security Alliance has created a Y2Q countdown clock, arbitrarily specifying April 14, 2030, as the deadline by which the world must upgrade its IT infrastructure to meet the Y2Q threat. It’s reminiscent of the global Y2K project, which catalyzed the replacement of two-digit year codes by four-digit ones by December 31, 1999, to ensure that computers didn’t think the year was 1900 and bring the world to a halt. Y2K and Y2Q differ, of course: Y2Q’s timing is unknown, but its impact can be imagined while Y2K’s timing was known although its impact wasn’t.

Already, three kinds of defenses against quantum hackers are being planned:

* Post-quantum cryptography, which refers to the development of new, quantum computing-proof encryption algorithms.

* Quantum key distribution, which pertains to the use of quantum physics to distribute keys randomly between users, while requiring a global network of optical links.

* Air-gapping, or isolating networks from the internet, which is likely to be impractical.

Post-quantum cryptography will likely be the most feasible option for businesses; it will require smaller changes in the computing infrastructure while replacing existing encryption algorithms. However, the transition will be difficult for business, which will have to learn to navigate a heterogenous protocol landscape. The challenge will be accentuated by the fact that the transition will take time and require frequent software upgrades.

Business has no choice but to act, but doing so too early in a fluid situation may prove to be a mistake. CEOs have to manage the complex trade-offs between the risks of not doing enough pre-emptively and the costs of spending too much to insure against a still-nascent threat in the future.

The best way to tackle the Y2Q problem is to develop “crypto-agility,” the ability to switch rapidly between cryptographic standards; implement the best solutions available at any point of time; and be prepared for more changes in the future. Only crypto-agility can help companies ease the transition by protecting against quantum attacks; minimizing their impact; and helping to recover faster from them. It will also enable companies to minimize the costs of tackling the problem, which will extend from the operational losses caused by cybersecurity issues to investments in the replacement of vulnerable equipment and protocol upgrades, which could all add up to hundreds of billions of dollars across industries.

Business must take four steps to develop its crypto-agility:

# Escalate the Y2Q problem to the board and top management. Companies must make cybersecurity a business priority. They must assign the responsibility for tracking developments in quantum computing to a team, led by a senior leader such as the CIO or CISO, that reports regularly to the board and top management. This will ensure that the focus is on corrective, not organizational, issues when quantum computing arrives. Doing this will be critical in sectors such as finance, where the risks are higher due to the nature of the business and its dependence on data. For instance, BNP and JPMorgan Chase are already working with quantum computing companies on risk mitigation methods while Nomura Group has created a global organization structure to deal with security in a post-quantum world.

# Identify priorities and create roadmaps. Every company must map its Y2Q risks by developing an inventory of connected assets, periodically evaluating the value of its data pools, and evaluating its exposure to new crypto standards. It must maintain a balance between the value of the data it has accumulated and the cost of protecting them, and develop a roadmap of its priorities. The U.S. Department of Homeland Security, for instance, has made public the template for such a roadmap, along with other resources, on its website.

# Plan, pilot, and test crypto-agility. Organizations must simulate Y2Q scenarios, such as the impact on their P&L, and develop countermeasures. They must conduct these exercises in co-ordination with their business units to ensure that the entire organization has visibility into the challenge ab initio. In addition to developing pilots, executives must stress-test them to learn more about the problem, and gauge their crypto-agility. Digital giants such as Google, IDQ, and Toshiba have developed modifications to Transport Level Security that any organization can use to test its readiness against a quantum attacker, so companies would do well to make use of these simulations.

# Collaborate with rivals and the ecosystem. Y2Q will not discriminate among companies, so leaders should adopt a collaborative approach to developing crypto-agility, working with peers and involving stakeholders such as academia, government, and digital startups. This approach will allow companies to share development costs; come to grips with the changing landscape faster and develop better Y2Q plans; and make credible policy recommendations. For example, in September 2021, 24 Japanese companies came together to form an industry council, Q Star, to understand, influence, and help business tackle the Y2Q problem.

It isn’t going to be easy for business to deal with cybersecurity once quantum computers see the light of day. CEOs have no choice but to start thinking about how to take on a threat that is inevitable. As long as business leaders act decisively, and early, they’re likely to find ways to survive the Y2Q problem. However, they must remember that the quantum clock is already ticking.

Vinit Patel is a project leader at BCG and ambassador at the BCG Henderson Institute.

Jean-François Bobier is a partner & director at BCG.