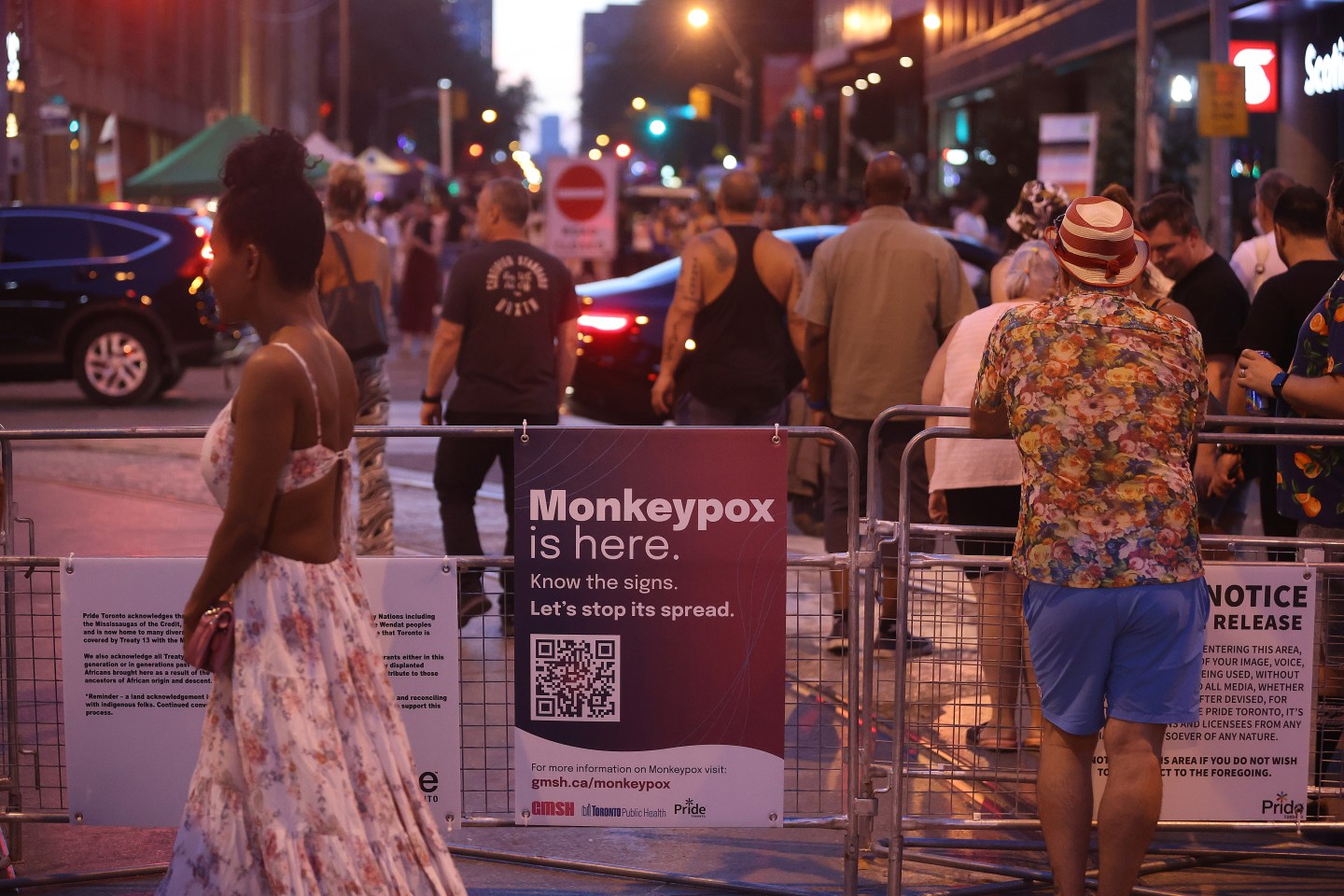 The White House on Tuesday announced the first phase of its national monkeypox vaccine strategy, saying it would release tens of thousands of doses “immediately” from the Strategic National Stockpile—with millions more on their way the coming weeks and months.

Nearly 60,000 doses of the Jynneos vaccine—the safer of two available—will be deployed from the stockpile, and nearly 250,000 additional doses will be made available in the coming weeks in an effort to slow spread of the disease. In the coming months, another 1.6 million doses will be released, federal health officials said on an evening press call.

Individuals at high risk of contracting monkeypox and areas with the highest number of cases will be prioritized, officials added.

“While monkeypox poses minimal risk to most Americans, we are doing everything we can to offer vaccines to those at high-risk of contracting the virus,” U.S. Department of Health and Human Services Secretary Xavier Becerra said in a Tuesday evening news release. “This new strategy allows us to maximize the supply of currently available vaccines and reach those who are most vulnerable to the current outbreak.”

As of Tuesday HHS had received requests for vaccines from 32 states and jurisdictions and had sent more than 9,000 doses, in addition to 300 courses of antiviral treatment, officials said, adding that they were working to boost testing capacity throughout the nation.

Prior to Tuesday, vaccines were available only to those with known exposure who had been notified by contact tracers. The announcement means vaccines will now also be made available to those who were not contacted by contact tracers, but who had physical contact with someone who had monkeypox; men who have sex with men who had multiple sex partners in a venue where monkeypox is known to have spread; and at-risk individuals in areas where the disease is spreading at substantial rates.

Officials did not list such areas, but as of Monday, California, New York, Florida, and Illinois lead the nation in identified cases, with 62, 37, 27, and 27, respectively.

The vaccine strategy should eventually shift from post-exposure vaccination to pre-exposure, officials added.

Jurisdictions can also request the ACAM2000 vaccine, which the stockpile houses in spades, officials said Tuesday. It’s an older generation smallpox vaccine that uses a live virus and can have serious side effects, including stillbirth and life-threatening infection. It’s considered unsafe for women who are pregnant or breastfeeding, people with weakened immune systems, and those with heart disease.

More than 1,000 cases reported globally in a day

Nearly 5,000 monkeypox cases had been identified globally in 49 countries as of Tuesday, U.S. health officials said, including 306 cases in the U.S. across 28 jurisdictions. That was up from 3,413 cases globally and 244 cases in the U.S. the day prior, according to data from the World Health Organization and the U.S. Centers for Disease Control and Prevention.

One death has been reported during the current global outbreak. While the virus has not caused any deaths in the U.S. and is much less transmissible than COVID, a coordinated response is still required, the Biden-Harris administration said in a Tuesday evening statement on its outbreak response plan.

“This is not a novel virus,” Dr. Ashish Jha, White House COVID-19 response coordinator, said on the Tuesday evening White House press call. “Unlike COVID of two years ago, monkeypox is a virus that’s been around forever. We’ve known about it for at least 60-some years. We’ve spent years studying it and treating it in endemic nations.”

Monkeypox not an international public health emergency, WHO says

The news comes on the heels of the World Health Organization’s Saturday announcement that the global monkeypox outbreak isn’t an international public health emergency “at present.” The decision drew criticism from some public health officials who said failure to respond in a timely manner could allow the outbreak to get out of hand—and praise from others who point to the mild nature of most cases in non-endemic countries.

The WHO “may have missed the opportunity to be aggressive and get ahead of the epidemic,”  Dr. Georges Benjamin, executive director of the American Public Health Association, told Fortune on Saturday.

The committee has stated “they will be more assertive and forward-leaning if they find it had escaped their detection and they begin to see it in new at-risk populations. A recipe for failure,” Benjamin said via text.

Dr. Panagis Galiatsatos, an assistant professor at Johns Hopkins’ Division of Pulmonary & Critical Care Medicine and an ICU doctor, told Fortune on Saturday that he had “no concern” with the decision.

There is a “good emphasis on understanding what to do with cases,” as well as on making vaccines available, he said via text.

“It’s not being undermined—it is at epidemic levels and countries are taking it seriously,” he added.

Dr. Amesh Adalja, a senior scholar at the John Hopkins Center for Health Security, told Fortune on Saturday shortly before the WHO’s announcement that there have been few hospitalizations.

“In general, this has been mild,” he said of the outbreak, adding that the lack of severity may be due to cases in developed nations with good healthcare and cases occurring in younger individuals.

“Monkeypox doesn’t have the ability to cause death and destruction in a way we saw during COVID,” he said.

As the virus continues to move beyond Africa, where it’s endemic, via an atypical pattern, scientists are rushing to figure out just how it’s spreading.

The virus is typically transmitted from human to human through close contact, which may include sex and could include contact with personal items like sheets and clothing. While not considered a sexually transmitted infection, public health officials say many recent cases have been found among men who have sex with men, and note that it’s difficult to tease out sexual transmission from close-contact transmission. Airborne transmission is known to be possible but has yet to be confirmed.

With smallpox declared eradicated by the WHO in 1980 and the vaccine, which works on monkeypox, no longer widely administered, the population has a low level of immunity against poxviruses, World Health Organization officials have said. That means transmission into the wider population could occur.

But symptoms in new cases appear to differ from that of classic cases—at least in some instances—with recent reports of lesions more subtle than usual and some cases involving just one lesion, health officials have said.